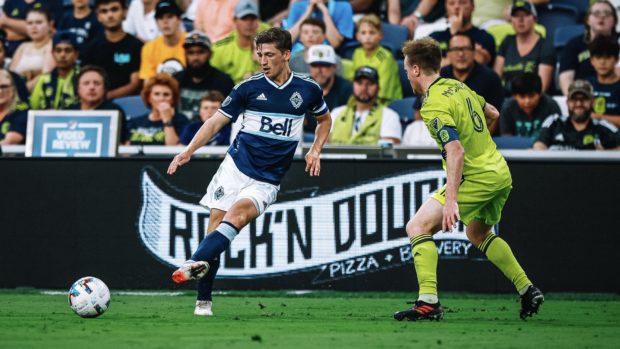 After a few glorious days of sitting in a playoff place, the Whitecaps dropped back down again after the 1-1 draw in Salt Lake last weekend. That was the end of a tumultuous week for the ‘Caps that saw them get thumped embarrassingly in LA, rebound with a big win over Colorado at home before flying out and just managing to scrape out a point in Utah.

The end result is that the club remains firmly entrenched in the dogfight over the last couple of postseason spots, and now face a team just two points ahead of them in that race: Nashville. The fact that this match is at home makes it a must-win for sure given the ‘Caps’ struggles on the road this year, but it certainly won’t be an easy one.

While Cody Cropper has played the most games of any goalie this season, Thomas Hasal has come back with a vengeance after a long stretch out, putting in a fine shift against RSL that earned him an MLS Team of the Week nod. The young Canadian showed the promise that led to him being named the number one to start the season, and the job looks to be his to lose once again.

Hasal’s return has been a part of a team-wide return to fitness as there is now just one person on the ‘Caps’ injury list in Déiber Caicedo. With it comes increased questions as to who will be in the starting XI, particularly in the middle of the park and up front.

Andrés Cubas has been a godsend for the club, but the position of his partner in midfield has felt like more of a hole. Russell Teibert, Leo Owusu, and Michael Baldisimo have all failed to grasp hold of that spot firmly, but the return of Sebastian Berhalter might be the boost that’s needed as he showed well in both of his appearances last week. He and Cubas might form the best available duo as things stand, although we’ll see how much Vanni Sartini would want to keep Teibert on the bench.

In the front three, Brian White returning from his injury opens up the question as to who will start up top with Ryan Gauld (who has been playing his best soccer of the season over the last couple of months). Lucas Cavallini seems a shoo-in with his status as the team’s top scorer, leaving one other spot open. Sartini has used the duo of Cavallini and White up front more often this season, but the addition of Alessandro Schöpf provides a very different stylistic option.

There is also the chance that Schöpf could potentially drop back and play next to Cubas, but it’s been stated that he’s come in to play as part of the front three generally. In his two starts so far he’s looked a little rusty and not commanded things up front, but hopefully once he gets his legs under him more he’ll have a stronger impact.

On the wings, Julian Gressel is the one that feels like a locked in starter for the stretch run, with Ryan Raposo, Cristian Dájome, and Marcus Godinho all having legitimate cases to start on the opposite flank. My personal preference would be to give Godinho the nod, with his surprisingly strong play this season giving a dynamic option that’s also slightly more of a natural defender than the other two.

Looking at the visitors, Nashville have a very even 9-9-9 record on the season and are coming off a massive 4-0 win over Dallas that snapped a six match winless run. Included in that run was a 1-1 home draw against the ‘Caps back at the end of July, where Javain Brown stole in off a free kick to grab a tying goal in the final few minutes.

The story for the season for Nashville is that they go when Hany Mukhtar goes. The German attacker has 10 goals and 3 assists in his last 10 matches, scoring or assisting on 13 of the club’s 17 goals during that span. He is one of the top players in the league and if the ‘Caps fail to secure a result it’s very good odds that Mukhtar is one of the reasons for that.

Win, and the Whitecaps will once again nudge over the playoff line, potentially as high as 6th place to close the weekend. Lose, and they could end the night in 10th, with playoff hopes all of a sudden looking quite thinner. There’s not much time left for errors!