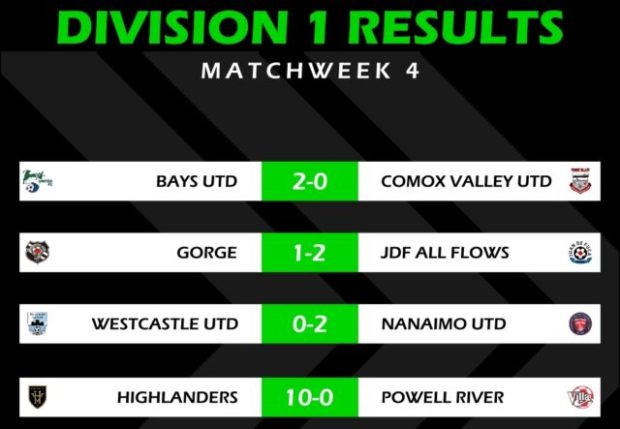 There was no snow, there was no smoke, and COVID did not take away another week, so that can only mean one thing – a full weekend of Division 1 soccer played on the Island!

Here is the overall breakdown from what was fairly a straight forward weekend……for the most part anyways.

Saturday started with a match at Oak Bay High School between the leaders, Bays United, and the newly promoted Comox team.

An early red card in the very first minute of play set the tone for the game and Comox were upset for the rest of the day feeling hard done by. It stayed level into the second half, but goals from Patrick Nelson and Rhys Foster got Bays United the 2-0 win, with Andrew Flello grabbing the clean sheet.

The second game of the day saw Juan de Fuca Allflows get a little revenge on Gorge FC, and in the words of a Godfather, it was served chilled. JDF defeated Gorge 2-1 at Westhills Stadium thanks to goals from Chris Wardle and Ethan Emile. The lone reply from Gorge was from Chase Haagensen.

Also at Westhills Saturday night, Nanaimo United defeated Westcastle 2-0 to stay undefeated since the divisional year started, including the Jackson Cup victory over Lakehill. Nanaimo’s goals were scored by Hussen Sayed and Daragh Fitzgerald, while earning another shutout was keeper Geoff Hackett.

The last game of the weekend was not so close as Powell River came to the south Island for their first match of the season. The young team was dismantled 10-0 by the Victoria Highlanders with Matthew Plaath grabbing four goals, Stuart Klenner hitting a hat-trick, and Michael Enes, Wyatt Davis, and Michel Dieu-Merci also getting on the scoresheet for the Highlanders.

Lakehill and Cowichan had the weekend off, leaving the Division 1 standings as follows after the Week 4 action: 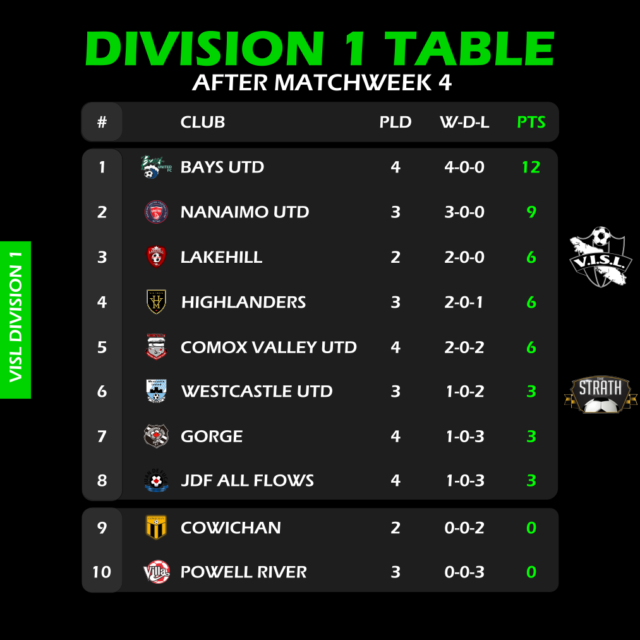 Bays stay atop the division, with Nanaimo and Lakehill close behind with games in hand. All three of those teams are still undefeated. Comox is right in the middle with Westcastle right behind.

The bottom part of the table is busy – and with Powell River Villa and Cowichan still looking for their first points of the season.

A couple more clean sheets ended up changing the goalkeepers leaderboard, with Geoff Hackett leading the way. And there were some goals on the weekend – so many that the Highlanders have invaded the leaderboard! 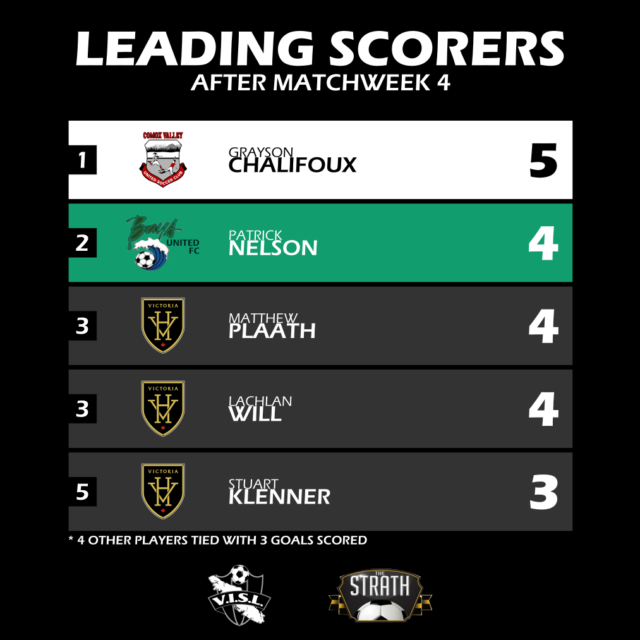 Grayson Chalifoux of Comox still leads the way, with cagey veteran Patrick Nelson and some new kids just behind.

The league is happy that we got all our games in safely and with people respecting gathering restrictions and still getting their votes in. Thanks for supporting local grass roots soccer!

There’s some important games coming up this Halloween weekend.

The three teams near the top will look to stay undefeated, while the next few teams have a crucial weekend coming up. Will they take the step forward and be treated? Once all the firework smoke clears, it will be interesting to see who has a couple treats left in their basket come Sunday morning.

Here’s what’s on the slate this weekend. 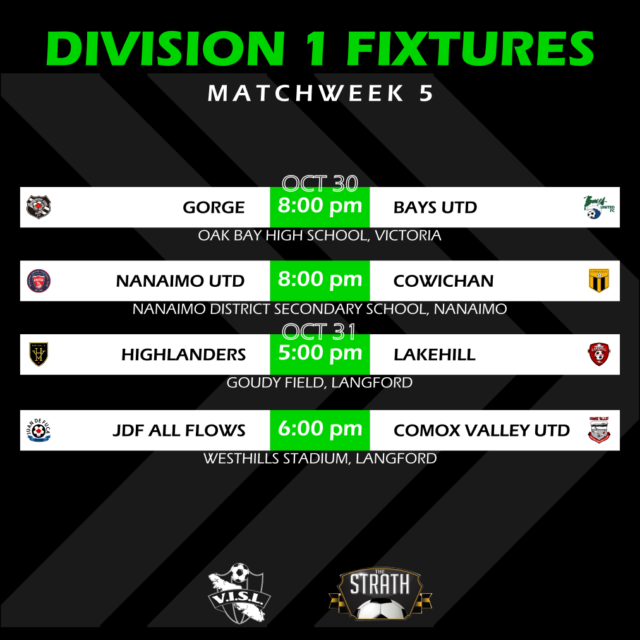