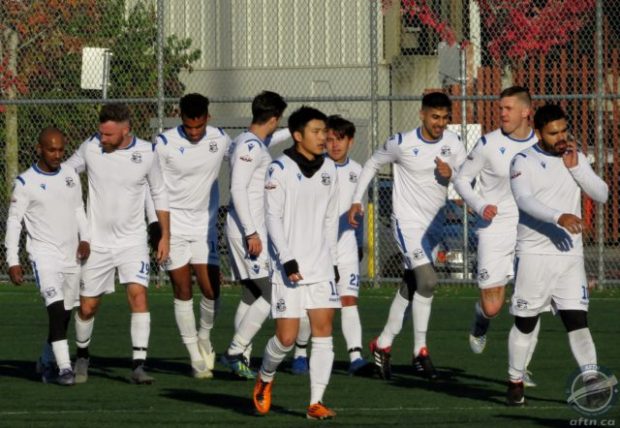 BB5 United, MAFC Tigers, and VUFC Hibernian all wrapped up their fourth straight wins in the new campaign to keep their 100% records intact, with the latter two already booking their place in next months semi-finals with two group games remaining.

BB5 are also all but there, barring a stunning collapse over their next two matches, and the only issue to be settled is which second placed team will join that trio in the final four as the best placed runner-up.

The Group A action got underway at Burnaby Lake on Friday night with the two teams fighting for second place battling it out. Club Inter EDC Burnaby edged the close encounter 1-0, leaving both teams tied on six points with two matches remaining against the other teams in the group.

A Boris Si hat-trick saw BB5 United continue their impressive start to the season with a 5-1 victory over Rino’s VSC at Trillium on Saturday afternoon, in a game that wasn’t the blowout that the scoreline suggests, and was only put to bed with a couple of late goals. 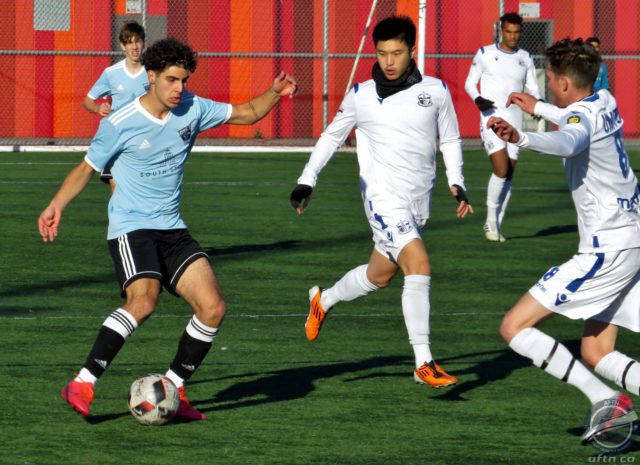 Cyler Point fired BB5 into a 13th minute lead with a nice individual goal, controlling the ball well and showing some quick footwork before burying the ball into the far corner.

Si got his first of the afternoon in the 29th minute, running onto the ball in the box before slotting it past the Rino’s keeper, and that was how things stayed until half time.

Rino’s came out strong to start the second half and got their reward 10 minutes in when 15-year-old Edwin Espinal was played in, outpaced the last BB5 defender, and pulled one back for the home team.

BB5 restored their two goal advantage with a 20 yard golazo from Si in the 71st minute, before he completed his hat-trick in the last minute with a slick finish after a give and go with Yassin Essa.

There was still time for the Surrey side to go nap, and Essa himself got on the scoresheet two minutes into stoppage time, pouncing on a loose clearance in the box, rounding the Rino’s keeper, and tucking it away into the empty net for the last kick of the game and a 5-1 final.

You can see all of the goals and some other highlights of the match in our video below:

Also we finally got to test out our new camera in daylight and you can find some photos from the match on our Flickr page HERE.

The Group B action kicked off at Newton on Friday night, with SFC Pegasus and Croatia SC playing out an entertaining 2-2 draw.

That paved the way for MAFC Tigers to book their semi-final berth on Saturday afternoon, and they duly obliged with a 3-1 win against NVFC Norvan at the Fen Burdett Mahon Stadium.

The Tigers took the lead 14 minutes in when Erik Edwardson hit his third of the season, finishing off a Farivar Torabi ball across the six yard box.

Torabi himself made it two 20 minutes later, collecting the ball in the box, taking a touch to knock it past the keeper, and putting it away into the empty net for his fifth of the season.

That was how things stayed till the 58th minute when Tigers extended their lead further. Torabi chased down a passback to the Norvan keeper, whose attempted clearance fell to Connor MacMillan, and the former TSS Rover rifled the ball home from just inside the box.

Norvan capitalised on a mistake between the Tigers defence to pull one back in the 62nd minute, but there was to be no dramatic comeback and MAFC came away with a comfortable 3-1 victory.

You can see the full Norvan-Tigers match in the video below:

That gave VUFC Hibernian the chance to seal their place in the last four against Burnaby Selects White Eagles at Burnaby Lake on Sunday evening, and they did, thanks to another brace from Victory Shumbusho and a goal from Thomas Gardner.

All of those results leave the William Azzi Premier Cohort Cup group standings as follows: 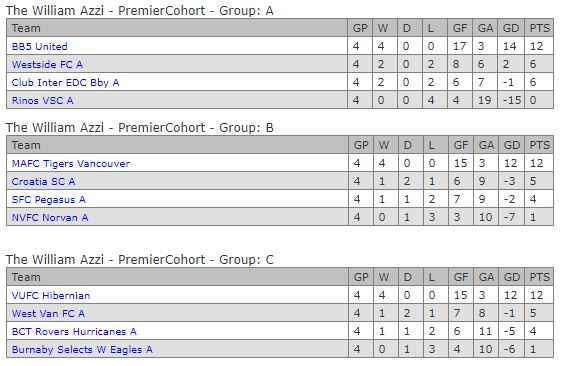 The final first round group games will be played over the next two weekends, before the semi-finals are scheduled to take place on the weekend of November 20 to 22nd, and the final the following weekend. All subject to change, Covid restrictions, etc. 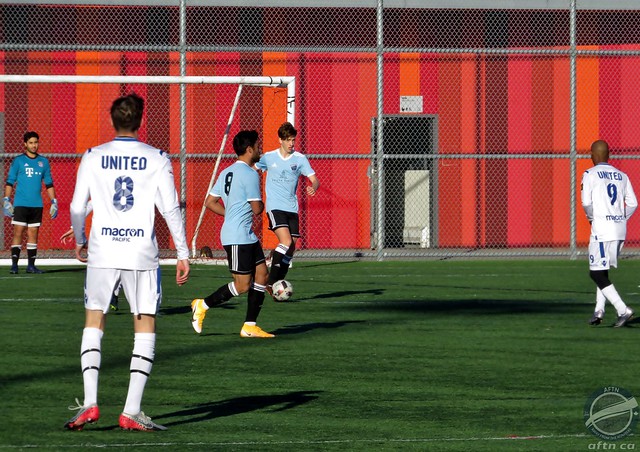