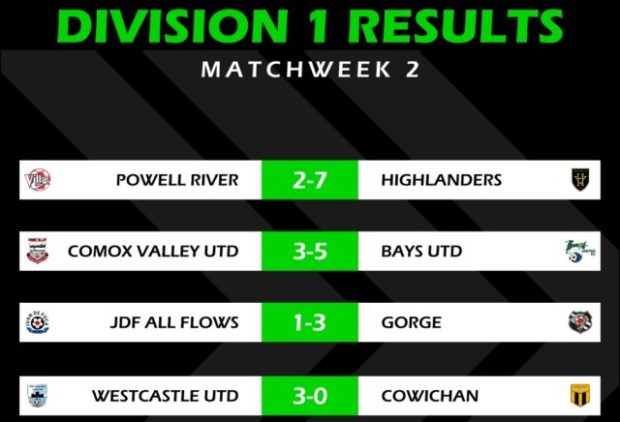 It was a mixed bag of results in the Island’s top division over Thanksgiving weekend. A weekend where many people typically go away for family get togethers, things had a whole different look this year.

At the end of it all, Bays United kept pride of place at the top of the Division 1 standings, in another slate of four matches that saw the goals fly in across the league.

Highlanders FC came away with a convincing victory as they travelled to Powell River and defeated Villa 7-2. Powell River had a 2-1 lead heading into halftime with goals from James Timothy and Cullen Buholzer, before the visitors came storming back to claim all three point in style.

Will Lachlan hit four goals along the way, with Michel Dieu-Merci bagging a brace and Luka Jeftic chipping in with one.

Saturday also had two winless teams battle it out at Westhills Stadium, with Gorge defeating Juan De Fuca AllFlows 3-1 thanks to a double from Chase Haagensen and one from Nils Webber. The lone goal scorer for JDF was Keevan Webb.

The league leaders travelled to the Vanier Turf in Comox, with visiting Bays Utd out gunning Comox Valley United 5-3.

Bays came out of the blocks firing and had a 4-0 lead after 38 minutes with goals from Salem Almardy, Patrick Nelson, Leo Nakabayashi, and Ian Whibley chipped in with a pair. The hosts had goals from Gabby Mason, Daniel Cato, and Gokhan Avcil.

The last game of the weekend saw Cowichan visit Westcastle at Westhills Stadium, but leaving pointless and goalless after a 3-0 Westcastle win. Maslah Hassan Farah hit tow and Brodi Keefe had the other goal in the victory. The clean sheet was shared between Cody Carter and Rune Korenicki.

Lakehill and Nanaimo had the weekend off because of byes within their respective cohorts.

And all of that left the VISL Division 1 standings as follows after the Week 2 action: 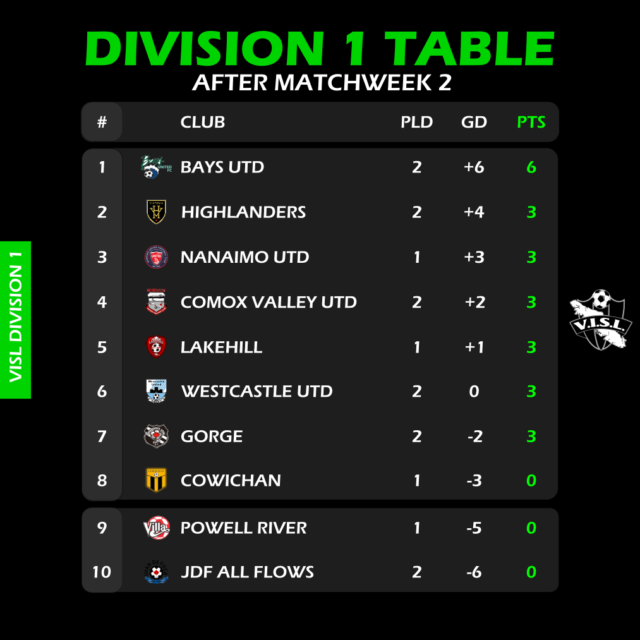 With Lakehill and Nanaimo having a game in hand, Bays are able to claim top spot by themselves.

I for one am very happy to see that there has not been any draws at this point of the year. This time last year, there was already 3!

Goalscoring wise – here is how the leaderboard shapes up as an explosive weekend from Lachlan Will that sees him leading the way: 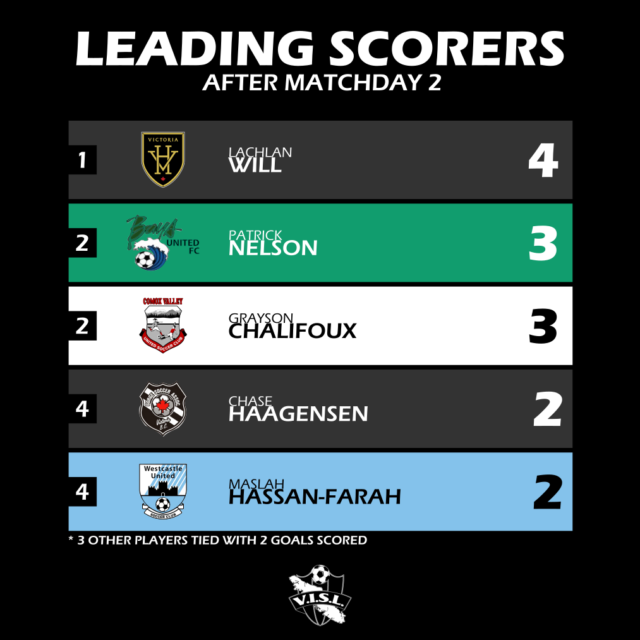 Lots of local soccer, lots of turkey, lots to be thankful for. Thanks for supporting local grass roots soccer. There’s another four Division 1 games on the slate for this week. Here’s what’s in store for everyone: 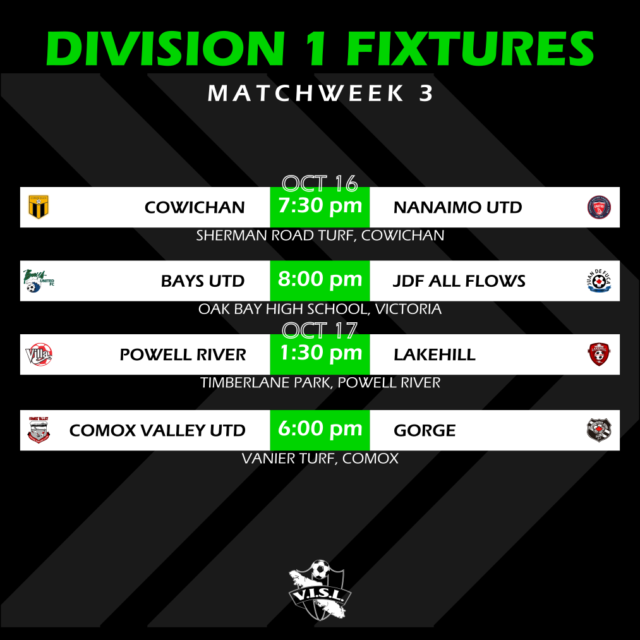