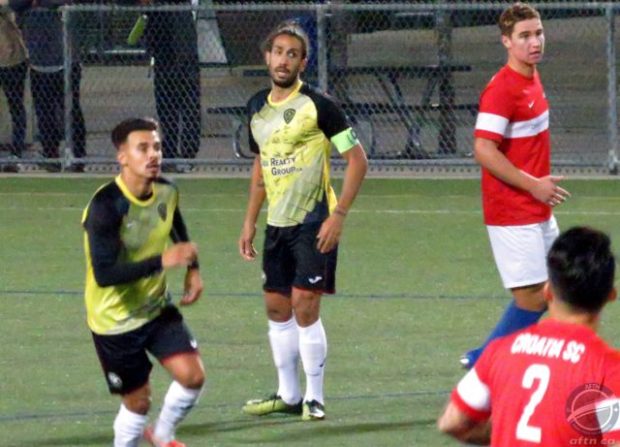 The weekend before last saw the second round of matches in the William Azzi Premier Cohort Cup, with the difference between the current strength levels of the teams right now starting to become clear.

BB5 United continue to lead the way in Group A following a 3-1 win over Westside at Newton on Friday night. Ramsey Alfantazi hit a brace for the Surrey side, with Yassin Essa adding the other goal. Jay Jeong was on the scoresheet for Westside.

BB5 now have a three point lead over both Westside and Club Inter EDC Burnaby in the early standings, the latter of whom travelled to Trillium on Saturday afternoon to face a young Rino’s VSC side with a lot of their academy players on display and came away with a comprehensive 4-1 victory.

The two powerhouses of Group B met at Burnaby Lake on Friday night, with Croatia SC on the wrong end of a 5-1 mauling from MAFC Tigers in a battle of the last two Premier winning sides, with star striker Farivar Torabi hitting another hat-trick. 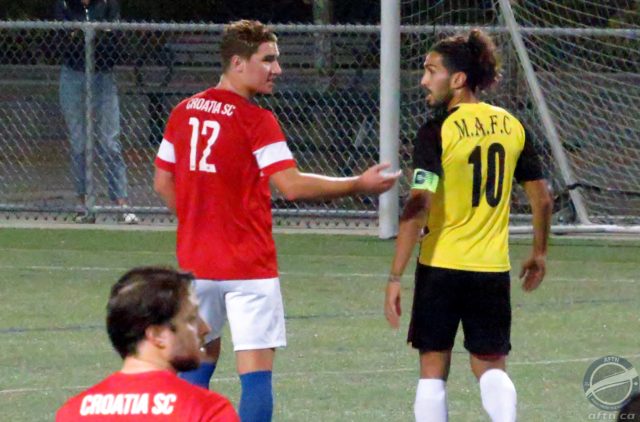 Tigers opened the scoring 11 minutes in when Erik Edwardson ran onto a defence splitting through ball, rounded the keeper, and slotted home.

Sensing blood, the Tigers pushed hard forcing a great save from the Croatia keeper midway through the half and creating a slew of other great opportunities that they were unable to put away.

MAFC did finally add to their tally a minute before half time when Torabi hit his first of the night, collecting a cross into the box, holding off the defender to make room, before firing home from a few yards out.

It looked like a tall order for Croatia to get back into this one, but they did just that 10 minutes into the second half, heading home a free kick. That goal just saw the Tigers move into another gear again and they restored their two goal advantage in the 59th minute.

Torabi broke on goal, squaring the ball to Connor MacMillan at the edge of the box and the former TSS Rovers standout unselfishly played it back into a wide open Torabi who had the easy job of tucking away his team’s third of the evening.

Two minutes later and it was four. Omar Rostant tore up the left wing and was played in on goal, coolly tucking it away into the far corner.

The scoring was rounded off in the 68th minute with Torabi pouncing on a sloppy passback from Croatia to grab his hat-trick and seal a very impressive 5-1 victory for Adam Day’s men.

You can see the full match HERE and you can also watch our edited highlights below:

The other Group B game saw SFC Pegasus see off NVFC Norvan 3-1 at Newton on Friday night.

The Group C action got underway at Thunderbird Stadium on Friday night as VUFC Hibernian continued their strong start to the season with a 5-0 shellacking of BCT Rovers Hurricanes.

Two from Logan Chung, and goals from Tommy Gardner, Victory Shumbusho, and Farzad Rajab Ali did the damage for Hibernian. 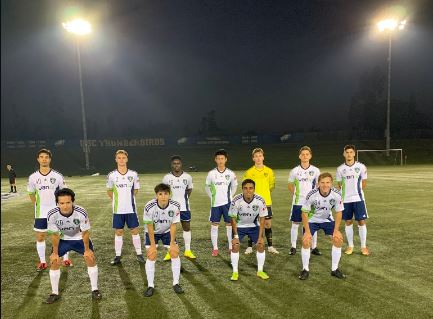 The Group C, and Premier, action wrapped up at Burnaby Lake on Sunday evening with a 1-1 draw between Burnaby Selects White Eagles and West Van FC.

All of which leaves the early season standings looking as follows: 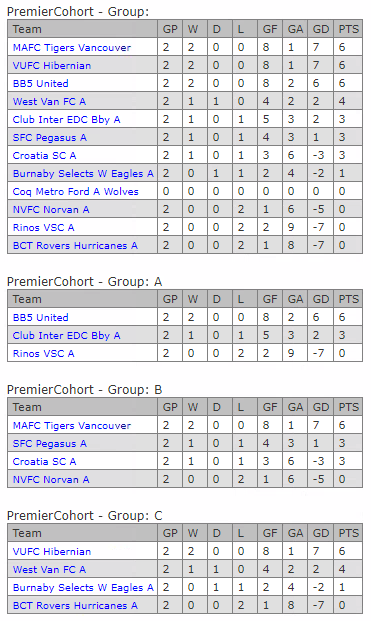 There was no VMSL action this past Thanksgiving weekend, so the teams will be back at it on Friday. You can keep up to date with all the results, fixtures, and standings at VMSLsoccer.com.