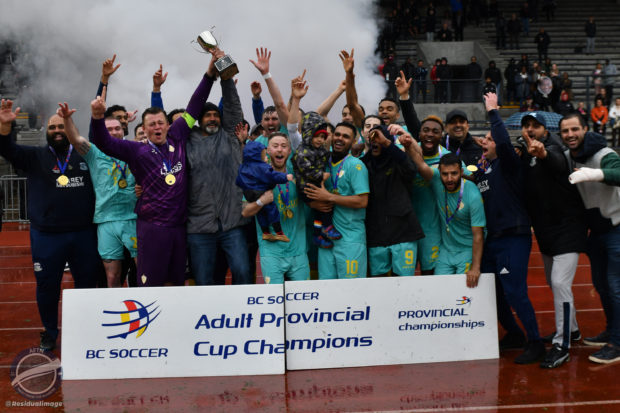 For the first time since 2013, we have back-to-back Provincial A Cup champions here in BC. BB5 United CCB repeated their triumph from three years ago, the last time the competition was able to be played, with a 3-1 victory over FC Tigers at a soggy Swangard Stadium in Burnaby on Sunday afternoon.

First half goals from Nic Morello and Caleb Clarke had put BB5 firmly in the driving seat by half time, against a FC Tigers side that had to play the last 59 minutes of the match with ten men following Nima Moazeni Zadeh’s red card. Tigers made things interesting with a Joe Zupo goal just past the hour mark, but BB5 finally put the game to bed with a Yassin Essa goal two minutes from time, which saw the Whitecaps Residency alumni sent off for his shirtless celebrations.

Vancouver Metro Soccer League (VMSL) clubs continued their dominance in the competition, making it 10 straight Provincial champions now coming from the league. VISL side Gorge FC were the last non-VMSL team to lift the trophy back in 2010, one of four triumphs for the islanders in since 2000.

It was the final many wanted, with the VMSL champs taking on the FVSL treble winners, and although the match maybe didn’t quite live up to the fireworks we were hoping for, there were certainly a lot of talking points coming out of it.

Both teams were missing some key personnel, but FC Tigers started the livelier, adjusting quicker to the wet and wide grass pitch at Swangard. BB5 found their footing and it was an even game over the first half hour, with both sides looking dangerous going forward and solid at the back. Neither side had the upper hand and it was certainly all up for grabs.

The first game changing moment came in the 31st minute when Nima Moazeni Zadeh picked up a second booking and a red card to reduce FC Tigers to 10 men. 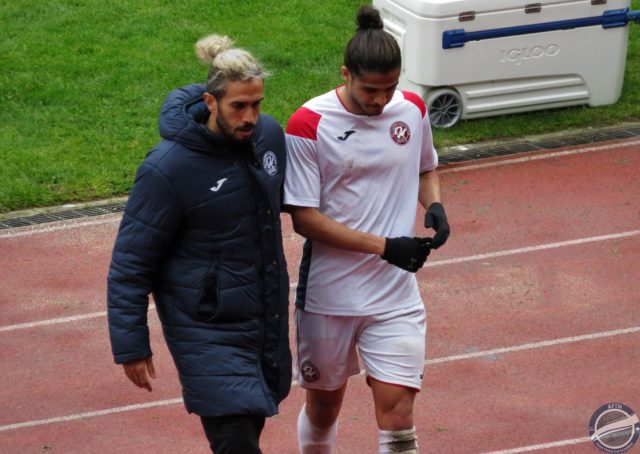 The Tigers midfielder had picked up an early booking and had just been warned by referee Mo Mohseni 50 seconds earlier for a crunching tackle that really should have been his second yellow at that stage.

The last chance afforded to him by the referee wasn’t heeded and Tigers were to find it a costly dismissal, as two minutes later they fell behind.

Morello got onto a long through ball, outpaced the Tigers defence and with the onrushing keeper Lukas Strauts slipping on the slick pitch, the BB5 co-leading scorer buried the ball past him to put the VMSL champs 1-0 up. 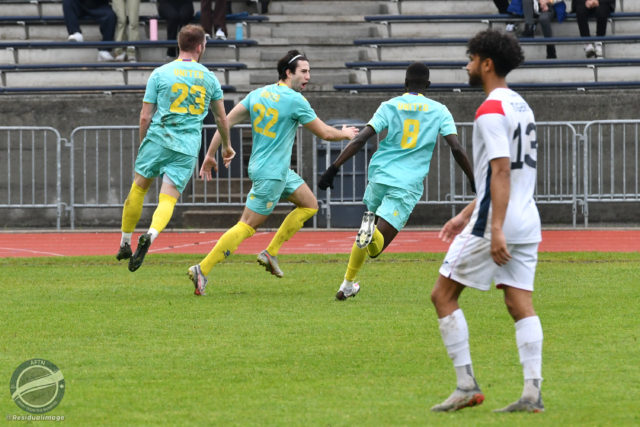 It was an uphill task now for Tigers, who had lost only one game all season, but they still fancied their chances and kept their attacking style to try and find the equaliser.

The next, decisive goal however saw BB5 extend their lead a minute into first half stoppage time.

Bobby Jhutty sent a corner into the box from the left, and after a scramble in the box, the ball fell to Clarke a few yards out and the former Whitecaps MLS homegrown player wasn’t going to miss from there, firing home to make it 2-0 to the Surrey side. 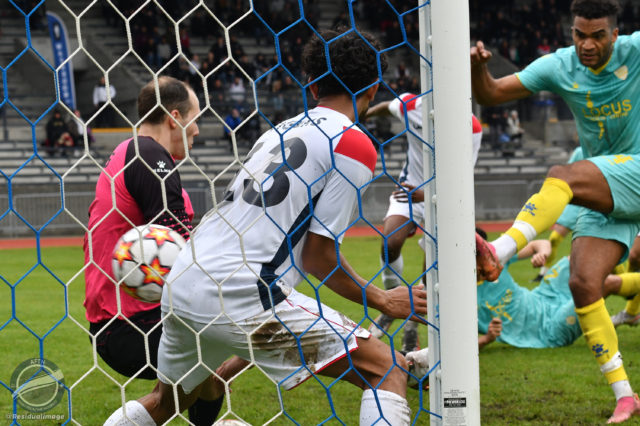 Tigers came out revitalised in the second half, looking dangerous on the counter, as BB5 were happy to just knock the ball around, await their opportunity for a telling pass, and run down the clock. It didn’t make for exciting fare, but it was getting the job done for them.

Their lack of urgency came back to bite them in the 63rd minute when Tigers pulled one back.

After keeping the pressure on the BB5 defence following a corner, the ball fell to Zupo, who blasted it past Luke O’Shea to breathe new life into the game and throw the Tigers a lifeline. 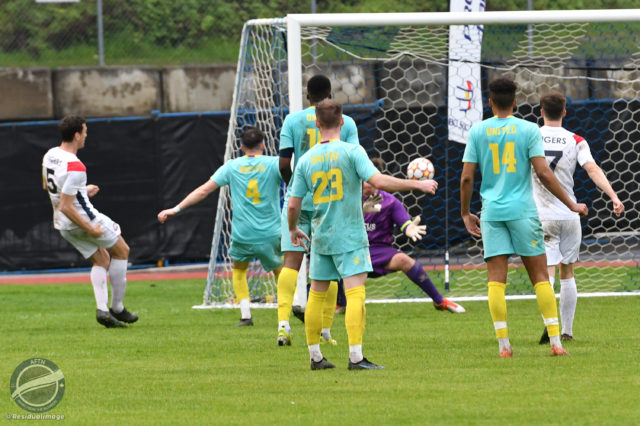 The goal finally lit a fire back under BB5, who raised their tempo, and the game flowed back and forth with both sides having chances to add to the scoring.

Tigers coach Adam Day was sent off in the 82nd minute after seemingly causing the assistant referee to take a tumble, and he missed seeing his side have a couple of chances to grab a dramatic late equaliser and take the game into extra time.

But their pressing was to be their final undoing, as a quick counter attack saw Clarke bring the ball forward and show great awareness to hold the ball up at the edge of the box then square it to Essa who had joined the attack, and the winger buried it past Strauts and into the top left corner to seal the deal for BB5.

The goal sparked jubilant celebrations, with Essa whipping off his top and running along the track to the halfway line. He’d just been booked minutes before, so he knew what was coming, but he didn’t give a jot as he saw the final moments off this one out in the dressing room. 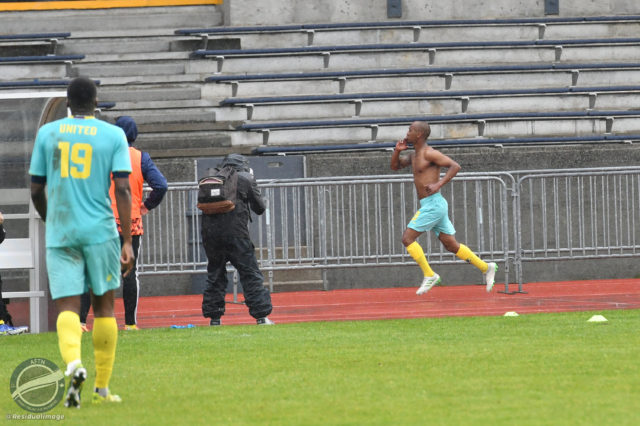 The final whistle came soon afterwards and BB5 United CCB had done it, becoming the first back-to-back winners since Surrey United Firefighters achieved that feat in 2012 and 2013.

When the team lifted the cup in May 2019 in Langford they were called CCB LFC United. Two weeks after that victory the team tragically lost centre back Brandon Bassi in a car accident. To honour his memory the team became BB5 United CCB, posing with his jersey at every team photo and having his dad involved with all their trophy celebrations (he’s the one lifting the trophy in the main photo). It’s been very moving to see the love the team have for Brandon and now they have the goal they wanted of having his name etched on the A Cup trophy for perpetuity.

You can see our highlights from the final on our YouTube channel and in the video below:

You can see all of our photos from the final on our Flickr page.

The victory capped off a fantastic couple of seasons for BB5, and naturally head coach Ted Hans was delighted with his team becoming back-to-back Provincial champions.

“It feels fucking great,” Hans told AFTN after the match. “Absolutely extremely happy for the whole team and everyone who put in that effort the whole year. It was such a team effort. So proud of the guys.”

It’s been an enjoyable couple of weeks as the Provincial Cups were played out. It’s always one of our favourite times of the year here at AFTN and it was great to have them back after that forced three year absence. For a number of the players involved, especially those in the final, the inaugural League1 BC season awaits. FC Tigers now have a Pacific Coast Soccer League season to play, while BB5 will be looking ahead to the Challenge Trophy in Vaughan, Ontario in October. Can they repeat in that as well? I wouldn’t put it past them.