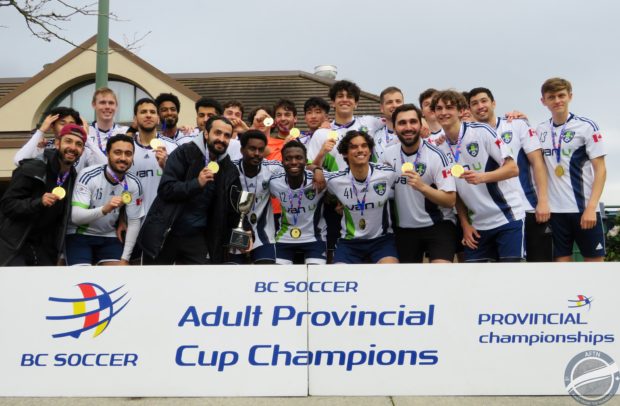 Two days, 10 cup finals, and a fantastic weekend showcasing local soccer was played out at Burnaby Lake Sports Complex on Saturday and at Swangard Stadium on Sunday as the 2022 BC Soccer Adult Provincial Cup finals took place for the first time in three years.

Vancouver Metro Soccer League (VMSL) sides were once again dominant on the men’s side, while it was a fantastic weekend for teams from the Lower Island Women’s Soccer Association (LIWSA) on the women’s side.

We’ll look at Sunday’s jewel in the crown, the Provincial A Cup final, in a separate article. For now, let’s take a look at how the rest of the weekend played out. 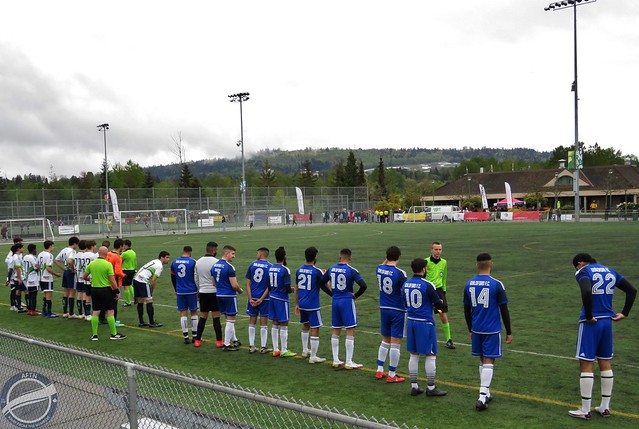 Both sides had scored heavily over the season and on their run to the final, but both were also quite solidly defensively, so it was hard to know if this game would be a free-flowing high-scoring affair or a cagey one. As it turned out, it was more of the latter and the game never really lived up to expectations.

Snipers were the better side in the first half, creating the more dangerous chances, with Guildford struggling to get their attack going. The Surrey side came out better in the second half but the game was to be settled by one goal and it came in the 63rd minute from youth call-up Tiernan Mackenzie, who started and finished a nice passing move to fire home what was to prove to be the matchwinner.

Mackenzie was one of four VUFC U18 call ups for the game and the all performed well. Snipers saw out the rest of the game to lift their first Keith Millar Cup to go with their promotion to Division 1 for next season.

You can see our highlights from the match and the postgame medals and trophy presentations on our YouTube channel and in the video below:

It was a wild one in the U21 Doug Day Cup with two VMSL sides also battling it out in that. Fusion FC came away with a 3-2 victory over Strathcona Primo that saw them nearly throw away a three goal lead and things get quite fiery in the closing stages.

Karmveer Rai had given Fusion a 21st minute lead against the run of play when he buried a loose ball in the box half before the wet conditions proved a bit of a nightmare for the Primo goalkeeper who bobbled an Ekhtiar Nijjar header to make it 2-0 in the 54th minute.

Two minutes later it was 3-0, and seemingly game over, when Nathan Fong put the ball under the Primo keeper and into the bottom corner.

But Primo came storming back when Nour Masoud’s shot was deflected into the Fusion goal, possibly off keeper Hargun Sidhu, then Masoud set up a grandstand finish when he reduced the deficit to one with two minutes remaining, volleying home a corner.

Primo pushed hard for the equaliser, but perhaps a bit too hard as Joey Cannova collided with Sidhu in the six yard box. The Fusion keeper wasn’t happy and in the stramash that followed Stathcona’s leading scorer was sent off for hitting Sidhu from behind.

Tempers calmed down and Fusion saw out the nine minutes of stoppage time to lift their first ever Doug Day Cup.

In the Masters finals, the A Cup was another all-VMSL affair, and 120 minutes couldn’t separate Port Moody SC Rangers and Columbus FC. With no goals, it headed to penalties and Port Moody added a Provincial Cup to their VMSL Cup this season with a 5-4 victory on spot kicks.

A Carlos Garcia goal was enough to see BMSL side Roma FC lift the Masters B Cup, with a 1-0 victory over Ridge Meadows SC Wolves in front of a large and noisy crowd. Garcia headed home on the hour mark on a rebound from a free kick that came off the bar. 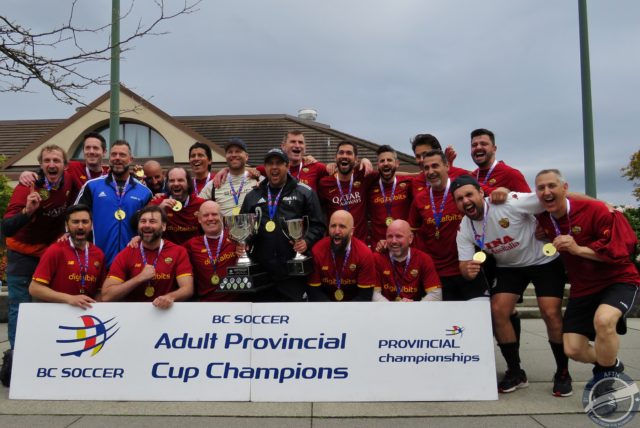 While in the first ever Masters Over 45s Cup, a goalless 120 minutes couldn’t separate Columbus FC and PCOV either, with Columbus taking this one 4-2 on penalties to add to their VMSL Premier title this season.

On the women’s side, the A Cup Final was a goalfest at Swangard Stadium on Sunday afternoon with VISL champions Gorge FC coming away with a 5-3 win over MWSL champions Coastal FC Premier in a highly entertaining match.

Kajal Parmar headed home the opening goal for Coastal in the 10th minute, but Gorge hit back right away and Kiara Kilbey tied things up with a header of her own 86 seconds later. The islanders then went ahead four minutes before half time when Liz Gregg’s long ranger took a deflection and flew into the back of the net.

Four minutes into the second half and Gorge had a two goal lead when Katie Kraeutner backheeled home a dipping ball at the back post after a save from the keeper. But Coastal came fighting back and Parmar grabbed her second of the game to reduce the deficit to one in the 57th minute.

Gorge added to their lead in the 68th minute when Kilbey grabbed her second of the afternoon from the spot, but Coastal just wouldn’t give up and made it 4-3 with 12 minutes left to play through Aman Shergill.

With the game still in the balance, Gorge finally wrapped the game up in the 86th minute when Maddie Yakamovich grabbed what proved to be the last goal of the game, burying a spilled shot from the keeper, to make it a 5-3 final and see Gorge cap off an undefeated season in some style.

It was a great weekend in general for Gorge’s women’s team with their other side winning the Women’s Provincial B Cup with a penalty shoot-out win over Coquitlam Metro Ford Galaxy at Burnaby Lake on Saturday afternoon. The game was goalless at the end of the 120 minutes with Gorge taking it 3-1 on spot kicks.

And it what was a fantastic weekend for the island’s women’s sides, with the wonderfully named Cowichan Cougars beating Meralomas United 2-1 to lift the Women’s Masters B Cup on Saturday. Jenna Waddy and Ashley Stultz grabbed Cowichan’s two goals, the second of which we just happened to capture on video.

📹VIDEO: Sometimes you just happen to turn around at the right time! Here's Ashley Stultz's matchwinner and the postgame celebration's as @vi_liwsa side Cowichan Cougars won the @1BCSoccer Women's Provincial Masters B Cup at Burnaby Lake on Saturday afternoon.#2022AdultProvCup pic.twitter.com/JJ6ugyibwI

Coquitlam Metro Ford Classics won the Women’s Masters A Cup on Saturday with a 3-0 win over Port Moody Gunners. Andrea Maloney opened the scoring for the Classics in the 25th minute from the spot, with Robyn Knight-Scott adding a second eight minutes later with a lovely looping finish over the keeper. Sara Maglio then sealed the deal for the Coquitlam side four minutes into the second half.

Congratulations to all the teams on what was a very entertaining weekend of football. You can watch the majority of the matches in full on BC Soccer’s YouTube channel.