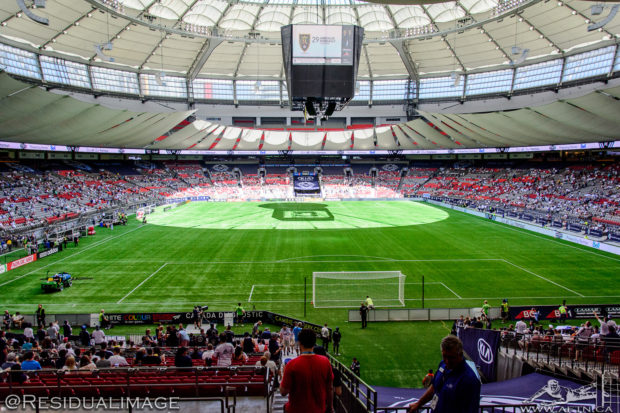 They say there’s no place like home. Vancouver Whitecaps’ MLS results at BC Place, and before that at Empire Field, tell a whole other story.

Home may be where the heart is, but far too often in the Whitecaps first six seasons in Major League Soccer it’s not been where the points are, and sadly there’s been a lot of heart missing in those matches as well.

Remember that season when the Whitecaps twitter account kept going on about BC Place being a fortress and no team being able to see off the team on home soil little black pellets? Then they lost and the whole walls of that supposed fortress came tumbling down round about them and still haven’t been rebuilt.

The Whitecaps home form of late has been abysmal. Their away form has been even worse. Little wonder we’re a struggling team and have been for a while. If you can’t win the majority of your home games, you can kiss goodbye to doing anything in pretty much every league.

This season has seen the ‘Caps take one solitary point at home from their first two MLS matches. With LA Galaxy heading to town on Saturday, quickly followed by Tigres in Champions League action and then the first Cascadia derby of the season with Seattle, that’s not a situation that holds out a lot of hope of getting remedied any time soon on current form.

They’ve scored no goals and mustered just one shot on target in both the games against Philadelphia and Toronto. That’s shocking stuff and hardly likely to get bums on seats. It’s no surprise then that neither of the first two matches have sold out. When the ‘Caps can’t sell out a season home opener or a big Canadian derby game, then the alarm bells will be ringing in the front office.

And when the alarms start going off amongst the bean counters, that usually leads to drastic fire prevention measures being put in place. In footballing terms, that ultimately will lead to personnel changes, whether that be at playing or management level.

Kekuta Manneh’s already gone. There’s a few others likely to follow. Will Carl Robinson be one of them? Further home disappointments and a crazy spell that will see them play five of six games on the road to finish April and head into May, may just be the breaking point a lot of people sadly feel is coming.

They can snap that feeling by starting to get the job done at home, although that may be easier said than done.

The Whitecaps home record during their six MLS seasons so far has been poor and amongst the worst in the league over the same period, as you can see below. 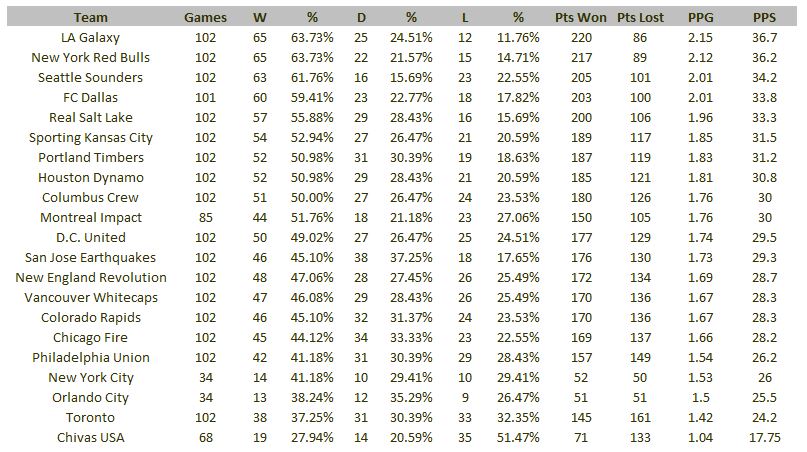 These stats run from the 2011 season to 2016, the six years the Whitecaps have been in MLS. The league has changed a lot in that period to what it had been before what was to be a busy expansion period of MLS 2.0, but we felt it the best gauge to measure every team in the league over that time for comparison purposes.

What the stats show is that of the 21 clubs that have played in MLS over that period of time, the Whitecaps have the eighth worst regular season home record. Certainly not the worst, but also certainly not a fortress or that of a team that would scream out serious playoff contenders. Most worryingly, it’s the second worst record of teams currently in the Western Conference.

Of the 102 home regular season games over those six years, the Whitecaps haven’t even won half of them, winning only 46% of their matches and losing a quarter of their home games. They’ve only won 46 more points at home than they’ve lost. Compare that to LA’s 134 more, Seattle’s 104 more, and Portland’s 68 more. The first two are most definitely fortresses, whereas Portland feels more of one than it actually is compared to others.

Those latter stats may mean jack shit in the grand scheme of things on the one hand, especially in a sometimes all bets are off anything goes playoff system, but on the other it does show that winners win at home.

Few will fear coming to Vancouver these days. If they ever did. Last season, the ‘Caps winning percentage at home was a measly 35%. That’s what they were achieving during their inaugural MLS season in 2011 and we all know how awful that year was on the whole.

Every other season has been hovering just about or just under the 50% mark.

They’re averaging 28 points per season at home. Only one Western Conference team averages less (Colorado, dragged down by a couple of horrible years). That leaves a lot of work needing to be done on the road if they are to clinch a playoff spot compared to their rivals, seven of whom average 30+ points a season.

So it’s all well and good thrusting numbers at you (yes, we’re meant to be away from those!), the more important thing than stats is to try and understand what’s behind them and what can be done to change them.

Vancouver does lack one serious advantage that places like Dallas, Houston, Colorado and Sporting KC have – the home field weather advantage.

Searing heat and altitude may help some of their rivals get an advantage on their opponents, but not so the mollycoddled ‘Caps who like to be all dry and climate controlled to help appease those fickle Vancouverites who wouldn’t come out if it was too cold or they were going to get wet. Just how large that section of the crowd is would be interesting to gauge.

Open the roof and let some real fucking weather in. It’s rains here. A lot. A hell of a lot. Use that to your advantage. Change that pitch up. Teams must dread coming to the nicely air conditioned venue and all it holds in store.

In all honesty, I don’t know how much of an advantage we could get from the weather here. Likely not much. It is what it is. Wet now, sunny in the summer, then wet again. Doesn’t do Seattle or Portland any harm though and right now, anything is worth a try to get any kind of advantage going.

The only advantage we had in the past was the super shitty turf that’s thankfully long gone. Maybe not so thankfully as the form as certainly dipped since the better playing surface was installed.

You might also have a better advantage if you didn’t play the music at ear bleeding levels before kick-off, killing any attempts from the supporters group to get some (hostile) atmosphere going. I love Kasabian, but let the sound at kick off be natural and set the tone for the rest of the match. When you can’t hear what the person right next to you is saying, you’re doing it wrong.

There is just no intimidating feeling at BC Place in general. Opposing teams are more likely to get hugs and asked for autographs than a load of abuse hurled at them. Maybe the Whitecaps should bring Atiba Hutchinson in from Turkey not for what he can offer on the pitch, but for his supporters tips off it.

But ultimately, you have to feel the Whitecaps’ woes at home fall firmly at the door of their tactics.

Carl Robinson likes to play counter attacking football. We know that, as he would tell us. It’s worked on the road to an extent and seems perfect for many away matches. But that is not the way the Whitecaps should be playing their home games.

Far too often the ‘Caps cede the possession stats to their opponents. Happy to soak up some pressure then use their speed to break and hit them where it hurts (if ‘them’ means the people in the stands behind the goals). Visiting teams must rub their hands with glee at the amount of time they get to piss around on the ball at BC Place.

Robinson would argue that the ‘Caps are attack minded at home, pointing to the number of missed chances over the years as proof that the intent is there even if the finish isn’t. He’d be right, again to an extent. The consistency to that argument just isn’t there, as one shot on target per home game this year will testify.

The Whitecaps do not play entertaining football at home a lot of the time. That’s hit attendances and there is an element of the support that would gladly see a 4-3 action packed defeat than a boring, ground out 1-0 win. I just want the three points. By any means necessary. Boring one goal, clean-sheeted triumphs work for me. I might moan a bit, that’s just what I do, but those results are effective.

But you just have to check online after a game to see people complaining about not being entertained. That feeling may seep into the players. Mauro Rosales told us before that he feels the home struggles are due to the players trying too hard to entertain. Piling forward on quick breaks without a proper build up or real plan except to run fast and try and get past the last defender.

The ‘Caps need to find the happy medium between the two approaches. The fine lines, so to Robbo speak. I’m not sure 4-2-3-1 is the formation to cut it at home to play the way they need to play. A 4-4-2, with or without a diamond, or even better, a 3-5-2 would be much more appealing, hopefully producing better results which then entertains the fans in the process. Drop the two man shield at home and play in a way where you control possession and don’t need it as the pressure you’re under will be far less.

There is no guaranteed simple solution, but something needs to change quickly to give the ‘Caps a stronger chance of making the playoffs by increasing what they put on the board at home. They’re already so far behind their Western rivals in terms of spending, they can’t afford to let the gap between home field advantages get any bigger, never mind taking pressure off them on the road to make up those dropped points.

Too many times you’ve come away from BC Place questioning the players’ passion and commitment. The time to put a heart where home is was already long overdue. Now they’re needing it to fight for their Whitecaps futures, because if the results don’t change, other things will.