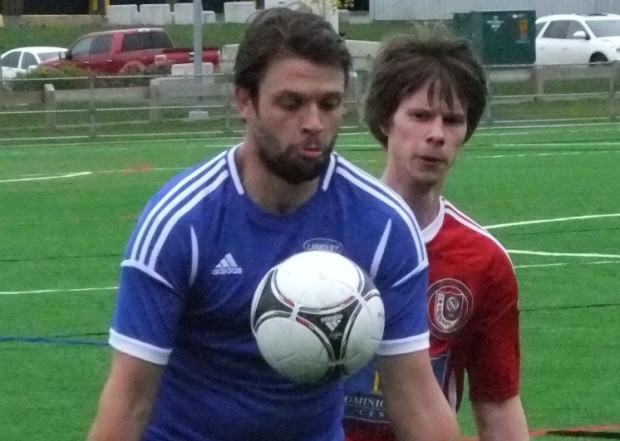 The eight BC Provincial Cup semi finals across the Men’s competition are now in the record books and the winners will now be busy booking their trips to the island for Finals Day on Saturday May 11th.

It was a weekend of drama and goals, sending offs and penalty shoot outs and overall another great advert for the local soccer scene here in BC.

After everything was played out, the A Cup final, will be contested between two VMSL powerhouses and former winners – Surrey United Firefighters and West Van FC.

Defending champions Surrey saw off the strong challenge of the PCSL’s Vancouver Thunderbirds, with a hard fought 1-0 victory at Thunderbird Stadium on Friday night. Former Whitecap Jeff Clarke scored the only goal of the game with an excellent header (which you can watch HERE) in the 51st minute, after the Thunderbirds had been reduced to ten men towards the end of the first half.

2009 champions West Van travelled to the island to face Cowichan on Sunday and ran out 3-1 winners in front of a large crowd at McAdam Park in Duncan. The visitors led 2-0 at half time thanks to a header from Max Baesatto and strike from Mike Winter. Desmond Tachie made it three for West Van about a minute after the break, before Cowichan pulled one back from a Ryan Andre header with around five minutes remaining.

We seem to have been good luck omens for Sarajevo on their Cup run this year, seeing them win all three of their games so far in this year’s competition.

First half goals from Edis Besic and Behdad Jamshidi was enough to take Sarajevo through.

It was an entertaining and fairly even first half, with both teams having their chances. The difference being that Sarajevo made the most of theirs.

Sarajevo were once again down to the bare bones and only had two subs. They were boosted by the return of Edis Besic, who had to miss the quarter final win over Ajyal Tigers following his sending off in the first round match against Rino’s Fury.

Cameron Whitters was looking lively for Langley in the opening minutes and crashed a shot off the bar 12 minutes in, but the flag went up for offside anyway.

The home side were edging the early running and Ryan Peebles shot over three minutes later.

Besic showed his importance to Sarajevo and the danger he posed to Langley in the 17th minute when the ball was played up to him on the edge of the box and he turned brilliantly to give himself time and space but he decided to hit it first time on the bounce and blasted wildly over.

He made up for that missed chance two minutes later though, with another brilliant turn inside the box and a perfect finish in off the right hand post for the opening goal of the game.

Langley had a great chance to tie the game up a couple of minutes later when a low cross came to Alex Jones at the back post and his first effort was saved by Sarajevo keeper David Wiggins. The rebound came back to Jones and his second attempt was cleared off the line by Mirsad Musovic, but the referee blew for a foul.

Sarajevo responded with a long range Elvis Besic free kick that flew over and Samir Avdic forced a save out of Langley keeper Bryan Roman.

The visitors doubled their advantage on the half hour mark.

Roman spilled a free kick in the slippy conditions and Amar Talic had two chances to put away the rebound before Langley cleared for a corner, which Behdad Jamshidi spectacularly straight in over everyone’s heads.

Whitters nearly pulled one back immediately when he had a header from a good position which Wiggins easily held.

It was an entertaining first half which flowed nicely, but the second half was a completely different affair as Sarajevo were happy to sit back more and the game was spoiled by a referee who blew for every little incident, disrupting the whole tempo of the match.

What action there was in the second half seemed to all come from the Dynamo, with their best chance coming off a free header from Shane Stewart in the box, which he headed wide after a great effort to reach it in the first place.

The game turned into a midfield tussle, peppered with cheap free kicks. Langley had a couple of half chances, but just couldn’t find the final telling ball or strike and the Sarajevo defence was pretty much untroubled and stayed solid.

The visitors enjoyed some possession but were producing no end results and were happy to see the remaining minutes tick by.

Langley were reduced to ten men with four minutes remaining. Wiggins blocked a Stewart shot at the near post and as Sarajevo brought the ball out, Dan Olma brought down Armin Begic and was given a second yellow card. It was soft and barely a bookable offence, never mind one which merited a red.

This should have killed off the tie completely, but to their credit the Dynamo kept fighting and enjoyed their best spell of pressure in the remaining minutes, hitting both posts with one effort in the 87th and Jones forced Wiggins to concede a corner with a near post save in the 90th.

The referee played eight minutes of stoppage time but apart from a Stewart shot that was saved, Langley didn’t look like pulling off a miraculous late comeback and Sarajevo held on with ease to claim a spot in the final.

There was some concern for them at the end as goalscorer Besic went down injured in the sixth minute of stoppage time, with what appeared to be a hamstring injury or a bad muscle cramp, after a challenge and had to be carried to the dugout after the final whistle. His loss would be a big blow for Sarajevo in their quest to lift the Cup.
Over on the island, Richmond All Blacks came through 1-0 against Comox Valley United in the other semi final on Sunday thanks to a second half goal from Steve Mathison.

The Deryl Hughes Masters Cup will be contested between North Delta Rangers of the FVSL and VMSL side Columbus FC, after both teams came through their semis by winning penalty shoot outs.

Saturday night’s first semi between FVSL Masters Premier Champions North Delta and VMSL runners up PCOV ended goalless after 120 minutes, before the Rangers won through on penalties. Both sides hit the woodwork in extra time but couldn’t find the breakthrough before North Delta triumphed 4-2 on spot kicks.

The other semi was played on Sunday and was an all VMSL clash at Burnaby Lake between Columbus FC and current Masters Premier Champions Poco Castilians. In an exciting match, which could have gone either way, Columbus led 1-0 at the half, then fell behind 2-1 and tied it up with five minutes remaining. Both teams scored in extra time and the game finished level at 3-3 after the extra thirty. Columbus won the shoot out 4-2 and claimed their spot in the final.

The Doug Day U21 Cup final will be an all VMSL affair between Guildford FC and West Van FC.

Both semis were played on Saturday afternoon and in the first of them, Guildford saw off Metro-Ford Jr Wolves 3-1 at Newton Athletic Park in Surrey. The second semi saw West Van resoundingly defeat FVSL side, and defending U21 champs, Port Moody Gunners 4-0 at Ambleside.

All of the Men’s finals (and all four Women’s ones) will be played on Saturday May 11th over on the island at Westhills Stadium and Goudy Field in Langford.

Whilst I understand the need to share it around the various Leagues, and the need to grow the local game, and the game in general, throughout BC, it just seems a lot of expense for BC Soccer and a lot of time for the players involved, although I’m sure that once they get there they’ll have a great weekend!

If you’re in the vicinity, then get yourselves along to some of the games if you can and support local soccer.

Shame that it also clashes with a Whitecaps home game against LA, but we’ll try and bring you the best coverage we can of the four Men’s finals.