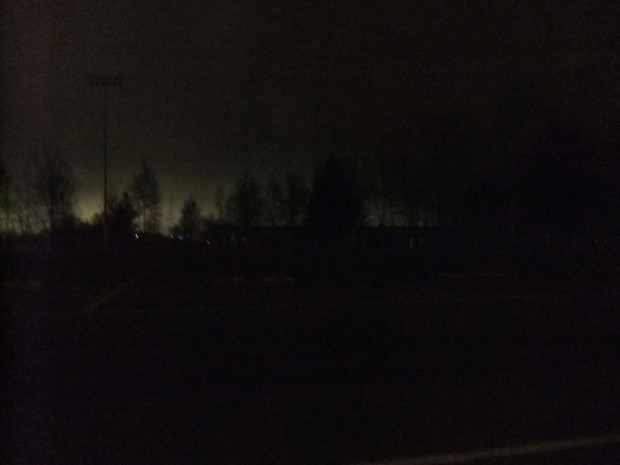 The 2013 BC Provincial Cup kicked off on Friday night with five first round matches being played across the men’s competitions.

AFTN took in the two games played in the A Cup and both were full of drama for very different reasons.

Both matches went to extra time, but only one of them finished!

The Thunderbirds were leading 1-0 with 12 minutes of extra time remaining when the floodlights were automatically switched off and the game had to be abandoned.

It was heartbreaking for the Thunderbirds, who had dominated the match from the first kick off but if and when the remaining minutes of the game will be played is now in the hands of BC Soccer.

The clues that this game was going to be a bit unusual came in the opening minute when the match ball went flat and had to be changed.

The Thunderbirds soon took control and had their first chance three minutes in when Brandon Bonifacio was played through but the Westcoast keeper Alex Andrews did well to make himself big and block the midfielder’s shot.

The game was being mostly played in the Westcoast half but the home side settled and started to come back into the game, without really creating any chances.

Both teams had half chances as the game headed towards the half, but neither goalkeeper was troubled.

With five minutes of the first half remaining Whitecaps PDL player Reynold Stewart had a great chance to give Vancouver the lead when he was played in but blasted over from ten yards out with just the keeper to beat.

That was the last action of the half and as the teams got out of the heavy rain, you had the feeling that it was just going to be a matter of time before the Thunderbirds opened the scoring.

It was actually Westcoast who had the first chance of the second half, with Dave Sambol firing over from long range. 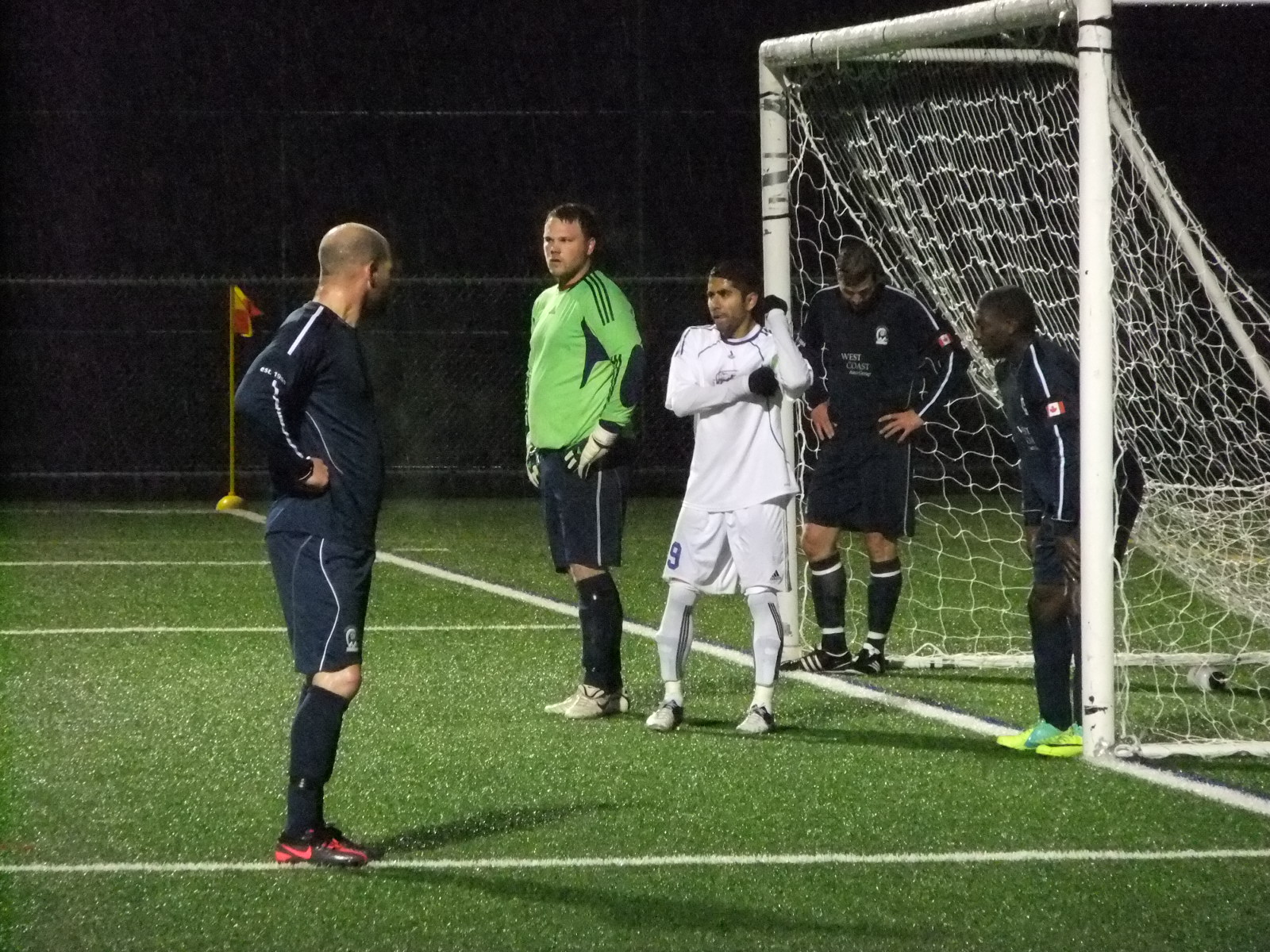 The home side had a lucky escape on the hour mark when their keeper fumbled a corner, but was able to recover and smother the ball as a goalmouth scramble ensued, with Thunderbirds captain, and Whitecaps Residency prospect, Gagan Dosanjh just unable to get the killer foot on to the loose ball.

Westcoast had their best chance of the game in the 67th minute, when a cross to the back post was brilliantly met by Ben McKay and his goalbound header forced a point blank leg save from Luke O’Shea.

The Thunderbirds responded with a Sean Haley shot that just whipped past the left hand post, after the team had hustled well to win the ball back deep in the Westcoast half.

Haley was in action again in the 72nd minute when his long range shot spun away from the Westcoast keeper in the wet conditions, but he was able to recover just before Stewart pounced to knock it home.

The chances were coming thick and fast, despite the terrible playing conditions, and Westcoast’s Dan Hill found himself with space and on the end of a great cross into the box but he was only able to direct his header sideways instead of goalbound.

As the game headed into the final two minutes of regulation, Westcoast hit a dangerous freekick to the back post across the Thunderbirds goal but there were no takers on the other end.

Vancouver pushed for the winner in stoppage time and had two great chances to get it, first from Bonifacio, who was just unable to get on the end of a great cross, and then with the last action of the half, Stewart hit a drive just inches wide of the post.

There was only ever likely to be one winner in extra time, with Westcoast looking the more tired team and the Thunderbirds threatening to run riot.

They had the ball in the net in the first minute but it was flagged for offside. That was soon followed up by a long range Dosanjh shot that forced Andrews into a diving save, before the deadlock was finally broken in the 99th minute.

Harry Lakhan played a deep free kick in from the left and Steve Johnson rose unchallenged to direct it off the back of his head into the net, signalling jubilation from the Thunderbirds (as you can see in the video of the goal below).

The Thunderbirds turned up the pressure, looking to kill the game off, and they had the ball in the net again four minutes later but the play was called back for a foul on the keeper.

Lakhan fired a shot inches past the right hand post, before Stewart forced the keeper to parry his shot in the last action of the first period of extra time.

The second half of extra time was just three minutes old when the lights went out.

The referee had advised both teams that this was going to happen, but the decision was made to play on, with the Thunderbirds especially keen to play off as they were dominating the game.

As we left the ground on Friday evening, confusion rained, which was ironic as the rain itself had gone off, as to whether the remaining minutes would be played later, a full replay ordered or the game forfeited.

It was a farcical situation. With the knowledge that the lights were due to go off, scheduling the game for an 8pm kick off now seems ridiculous. We’ll keep you posted with what happens with this.

The other opening match of the Provincial A Cup saw Estrella de Chile come back from a two goal deficit at halftime to beat ICST Pegasus 3-2 after extra time. The Burnaby side got a brace from Eric Ray and a single from Brian Dottin while Niko Marcina responded for Pegasus.

The first half saw end to end action but it was Pegasus who had the better of the chances in this all VMSL clash and they finally took the lead when Marcina guided a free kick past the keeper. With less than five minutes of the half remaining, a hand ball in the box by Estrella gave the home team a chance to double their lead and Marcina stepped up to convert the penalty.

A switch to a 3-5-2 early in the second half did not sway the tide until there was just over 20 minutes to go. Eric Ray perfectly placed his free kick over the keeper just inside the far post to pull one back for Estrella. 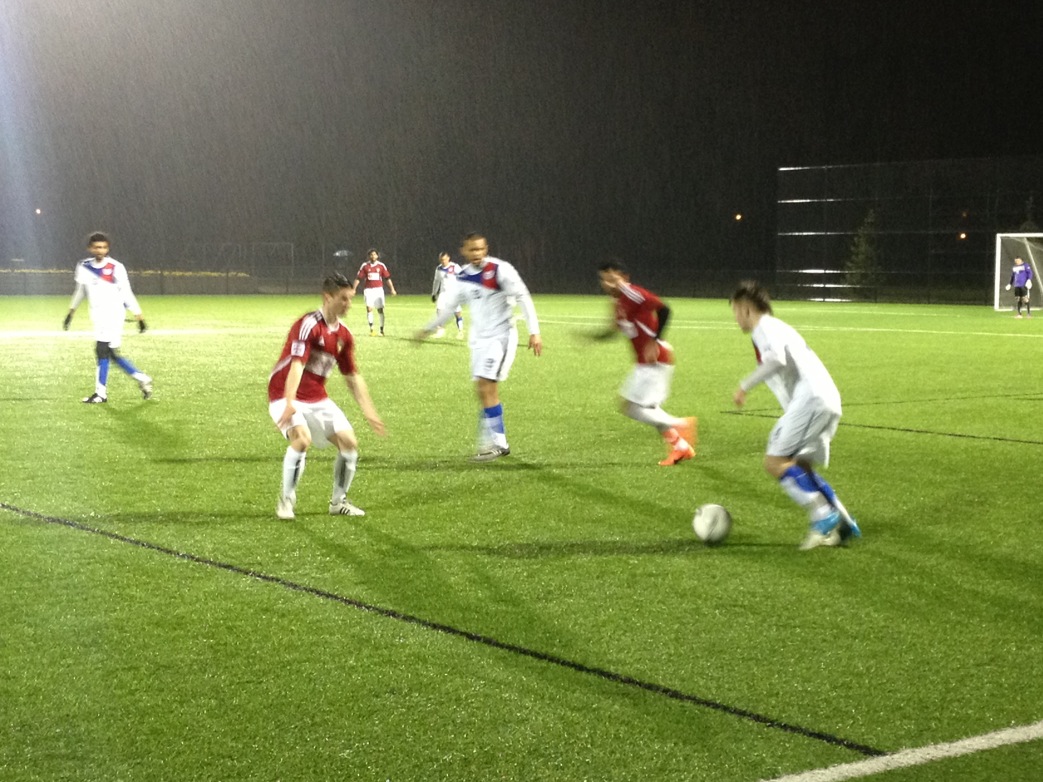 Pegasus had a chance to put away the game when Ryan Powell was free in the box but Michael Newton came up big with a huge stop to keep the visitors within a goal.

Moments later Estrella made their opponents pay as keeper Amar Dinsa mishandled the ball right to Brian Dottin who had an open net to tie the match.

Estrella took their first lead of the game seven minutes into extra time when Ray fought off a defender and volleyed his shot past a helpless keeper, for what was to prove to be the winning goal.

The home side were reduced to ten men just before the extra time break when a dangerous tackle by Jag Saggin injured Habil Otieno, causing his teammates to carry him off the field.

ICST Pegasus put a valiant fight in the final 15 minutes but Estrella de Chile proved too much and they advance to the next round of the Provincial Cup with a 3-2 win.

The other three games of the night all took place in the Deryl Hughes Masters Cup.

Sapperton Rovers prevented it from being a hat-trick of Masters wins for the FVSL sides, with a narrow 3-2 win over Delta United taking the VMSL side into the next round.

Saturday sees 11 Provincial Cup games being played across all four competitions, with another 16 taking place on Sunday. We’ll be at a couple of the games on Sunday and will bring you a full round up the following day, so check back on AFTN then.

If you want to get out and see some of the action for yourself then you can find all of the fixtures, venues and kick off times HERE.

So get out and support local soccer. As we keep saying, you won’t be disappointed if you do.