Vancouver Whitecaps fans are looking to dress for success on Saturday.

It may be the last match of a disappointing inaugural Major League Soccer season for the Caps, but many of the fans are looking to see it off in some style.

In what we hope will become an annual tradition, AFTN and the Vancouver Southsiders are encouraging fans to come to the game in fancy dress costumes.

You could call it a pre-Halloween celebration if you want, but the main thing is to have some fun. After the season we’ve had we deserve it!

Going to the last game of the season dressed up in a costume, or “fancy dress”, is something of a much looked forward to tradition back in the UK.

With travelling to away games a lot easier in the smaller confines of the UK, many fans partake in this tradition during the last away game of the season. Other Clubs have the tradition of dressing up for the last home game.

Back in Scotland, my Club, East Fife have adopted this tradition since 2006.

Here’s some examples of our previous days out at Montrose, Arbroath and Albion Rovers.

Maybe you’ll get some inspiration for your own costume!

And it’s a tradition we want to start and hopefully continue in Vancouver.

It’s just a fun way to say goodbye to the players and the season, as the long post season lull looms on the horizon.

It doesn’t matter whether you’re a Southsider, a Northsider, an Eastsider or a Westsider, we just want all Whitecaps fans to be a part of this.

If you can get along to the ‘March To The Match’ from Doolins to BC Place, then all the better! What could be better than a march of costumed Whitecaps fans walking down Granville Street?!

A perfect reminder that real sports fans in the city know how to enjoy themselves and have fun without things turning nasty. 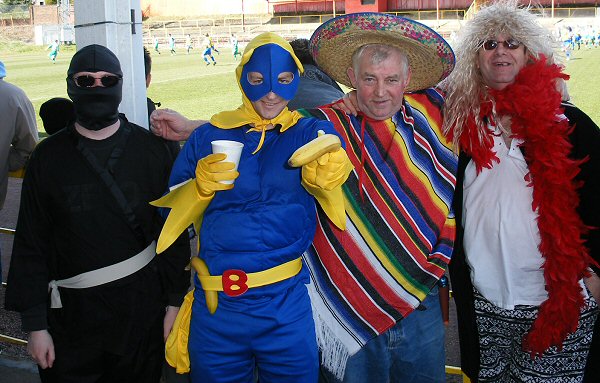 The Club will also be undertaking their own fan festivities on Saturday, as it will be “Fan Appreciation Day”.

So dig out your best glad rags, or just rags, and add some extra festiveness.

We are trying to lift the guys on to that 17th place finish after all!