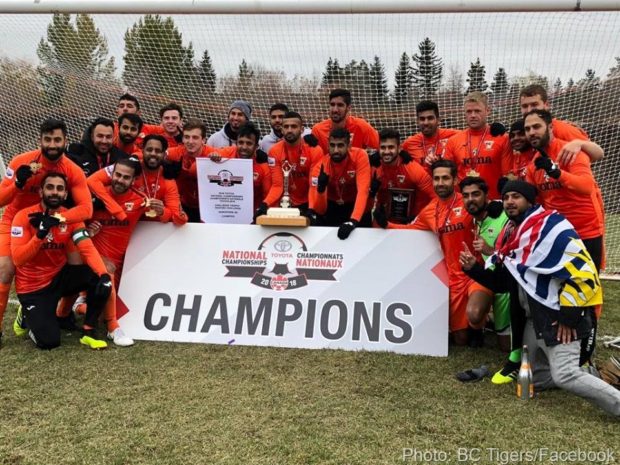 The Challenge Trophy is back in British Columbia for the first time since 2004 after BCT Rovers Tigers United (or Surrey BC Tigers Hurricanes as they went under during the tournament) mauled Ontario Cup champions Caledon in Monday’s final in Saskatoon.

Player/coach Nick Soolsma (pictured below) hit four, with Ryan Dhillon grabbing two and Pavi Dhillon another as the VMSL side dominated from the get go to run out comfortable 7-3 winners and end a long 14-year wait to bring the trophy back to BC.

The Surrey side attacked from the start and got their best chance to open the scoring 15 minutes in when Ryan Dhillon curled one just past the right post. Three minutes later though he got his reward after some nice individual work saw him play the ball to Soolsma, who took it into the box and cut it back from the byeline for Dhillon to slot home the opener.

The Ontario side regrouped and although they hadn’t threatened much so far, Michael Pennio crashed one off the Tigers’ left post in the 22nd minute. Whether that would have changed anything if it had gone in, we’ll never know, but the BC champs doubled their lead ten minutes later when Pavi Dhillon finished off a nice individual effort.

The VMSL side continued to pile on the pressure and Soolsma got his first off the afternoon in the 35th minute when he fired a free kick low into the bottom right corner to make it 3-0. The Dutchman made if four two minutes before half time when he was brought down in the box, picked himself up, and fired home the penalty.

The Surrey side couldn’t have imagined a much better first half and it was only to get better after the re-start when Soolsma completed his hat-trick when he tapped home a Ryan Dhillon cross from three yards out. 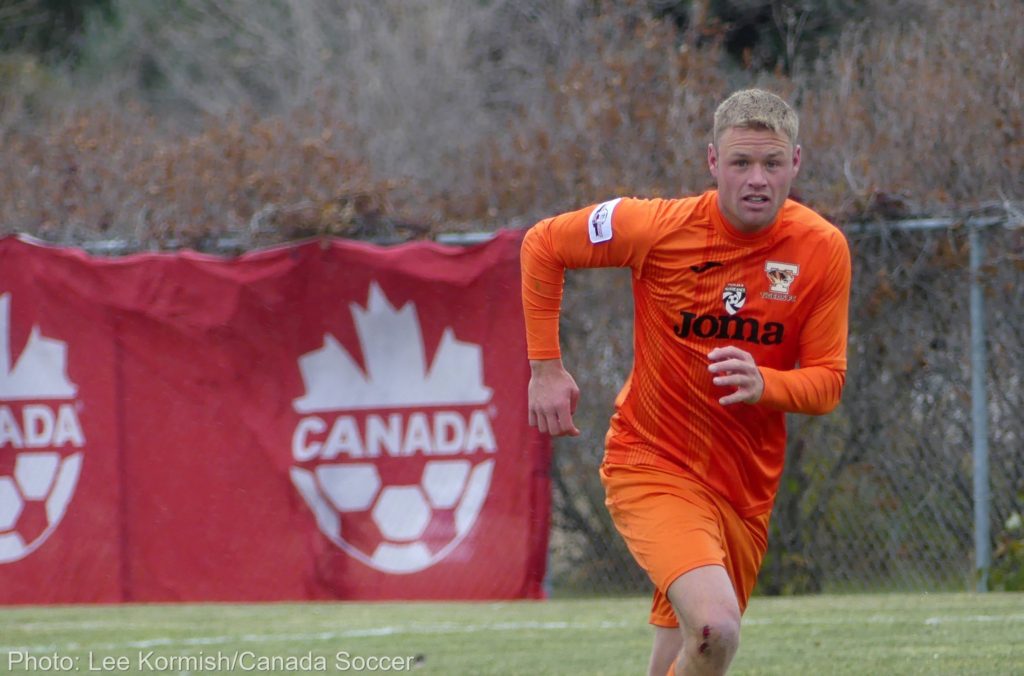 It was nearly sixth a minute later when Soolsma’s shot was saved at the near post, but Caledon weren’t done yet and went up the field to pull one back through Stavros Badunas after he outmuscled a Tigers defender.

BC’s five goal lead was restored in the 64th minute when a rampant Soolsma grabbed his fourth of the match after beating the offside trap to run onto a perfectly weighted Navjot Thind through ball, racing on goal and chipping one over the Caledon ‘keeper.

Full credit to the Ontario side who didn’t let their heads go down and kept pushing to the end and they got their reward with a nice volley from Diego Gonzalez in the 69th minute and a Jordan Piccinin effort eight minutes later.

There was to be no miraculous comeback though and Ryan Dhillon made it a 7-3 final when him and Soolsma broke through on a two man break, with the coach squaring the ball to the former SFU standout to fire home the final goal of the game.

It was a fantastic week for the Surrey side who fought back to draw their opening group game 1-1 with Saskatoon Revolution, before seeing off Alberta’s Edmonton Scottish 3-2, last year’s champs, Nova Scotia’s Western Halifax, 2-1, and then securing their place in the final on Sunday with a 4-0 win over New Brunswick’s Fredericton Picaroons Reds.

Five matches in six days is a tall order, but the Tigers got the job down, becoming the first BC side to win the Challenge Trophy since their Surrey rivals Pegasus in 2004. Nick Soolsma told us after their Provincial Cup win in May that this was a side built to make a run for the nationals, and so it proved to be. Congratulations all round. Let’s just hope it’s not another 14 years till the next one!