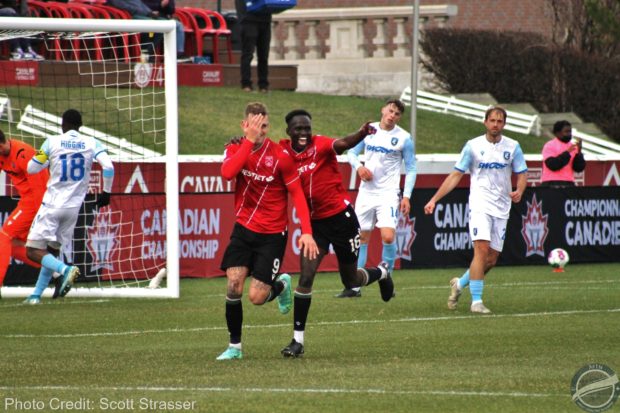 New signing Myer Bevan scored twice and Cavalry FC overcame FC Edmonton for the second time in the span of a week on May 10, advancing the Calgarians into the quarter-finals of the Canadian Championship with a 2-1 win at Spruce Meadows and setting up a potential showdown with MLS side Vancouver Whitecaps.

The New Zealander Bevan put forth his best performance in a Cavalry shirt to date, helping propel Cavalry to yet another home victory over FC Edmonton – this time knocking their provincial rivals out of the Canadian Championship.

Similar to their 3-0 win over Edmonton last Friday night, Cavalry started on the front foot to take a 2-0 lead in the first half. Though the Eddies improved in the second half and tested Cavalry’s defence with a couple of chances, they again fell short in finding their way back into the contest.

“It was a great cup tie, wasn’t it?” said Cavalry head coach Tommy Wheeldon Jr. afterwards. “It was a game of two halves. We were exceptional in the first half and credit to Edmonton – they came out in the second half and made a really good game of it. All that matters now is that we’re in the hat for the next round.”

Cavalry’s win advances them into the next round of the Voyageurs Cup, where they will play the winner of Wednesday’s match between Valour FC and Vancouver Whitecaps. 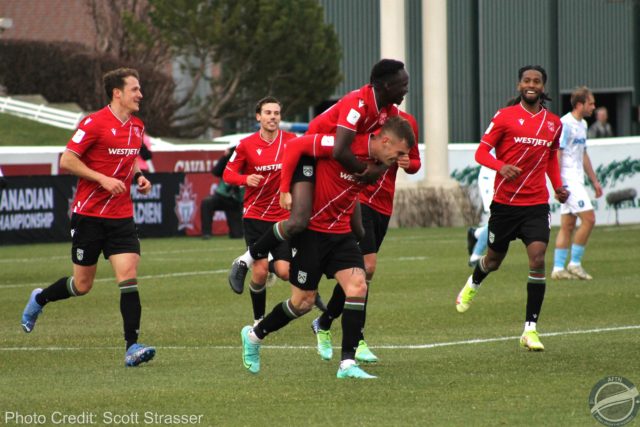 The performance marks a third consecutive win and a fine run of recent form for Cavalry FC, who have outscored opponents 7-1 in those three matches.

After a quiet first few matches for Cavalry, Bevan burst to life on Tuesday night against the Eddies, spearheading the hosts’ attack with energetic pressing and surging runs forward.

“We came into this game wanting to play on the front foot from the start,” Bevan said. “Me and Ali Musse and the boys in front were pressing from the start and we got chances from it. It worked, so we continued doing it and it obviously went our way.”

The former Auckland City FC and Vancouver Whitecaps 2 striker’s hard work paid off in the 17th minute. He scored his first goal for Cavalry with a glancing header following a near-post corner kick from Ali Musse in the 17th minute. Bevan got enough contact on the ball to deflect Musse’s in-swinging cross past Eddies’ goalkeeper Andreas Vaikla and into the net at the back post. 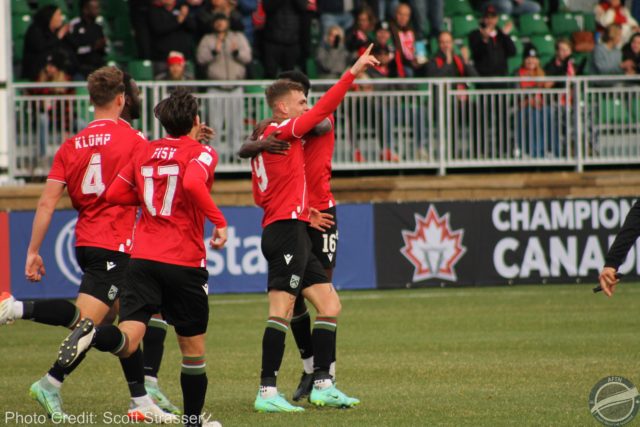 He credited Cavalry’s work on set pieces in training sessions this season, as well as Musse’s pinpoint delivery, for helping him score his first goal for the club.

“The front-post run, we’ve been working on that a lot – getting across that first man in the zone to get the flick,” he said. “It’s all on the ball. We can make runs all day, but it comes down to the ball, and Musse played a great ball.”

Brimming with confidence, the New Zealander stepped forward to take a penalty for Cavalry in the 36th minute, following a foul on José Escalante in Edmonton’s 18-yard box. Chosen to take the penalty, Bevan slotted his kick into the bottom-right corner to double Cavalry’s lead.

Wheeldon Jr. touted Bevan’s positive movement and finishing ability, adding he has told the New Zealander to be patient, and that the goals would eventually come.

“He’s a player we have high hopes for,” Wheeldon Jr. said. “I think he felt he could have had a hat-trick. He was disappointed in the last one to not get one in the half of football [he played].

“Myself and Leon Hapgood, we chatted with him and said, look, the goals will come because he’s in the [right] positions. When he’s having the chances, it’s a rule of averages. Today, a clinical header and a nice finish from the penalty spot.” 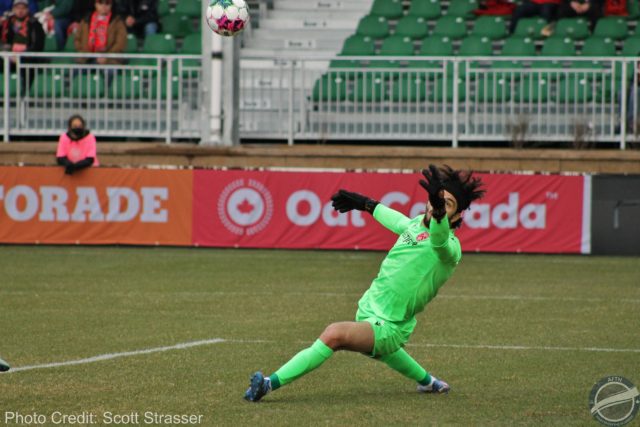 FC Edmonton pulled one back 10 minutes into the second half, thanks to a penalty kick of their own. Saah “T-Boy” Fayia was fouled in the box, and Tobias Warschewski stepped forward to score his second goal of the 2022 season. The strike marked Cavalry ‘keeper Marco Carducci’s first conceded goal in his third game of 2022.

Eddies’ head coach Alan Koch pointed out the team’s performance was reminiscent of the Friday night match against Cavalry last week, when Edmonton played decently in the second half, but didn’t do enough in the first half to be competitive against their provincial rivals.

Still at the bottom of the Canadian Premier League pecking order and now knocked out of the Canadian Championship, Koch reiterated that FC Edmonton has a lot of growing to do this season.

“That’s disappointing though, because as much as we’re inexperienced and immature at times, I think on Friday and tonight, we showed the potential we have,” he said. “You can see moments where our young players are coming together. But to come play against a team like Cavalry, you can’t just play in spits and spurts – you have to play for 90 minutes. The better team won again tonight.” 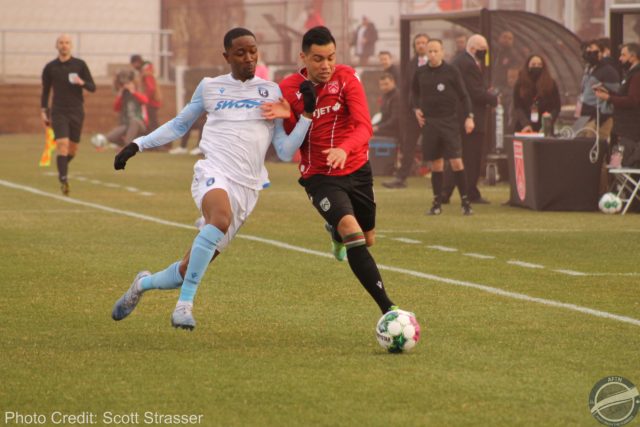 The Al Classico was one of three Canadian Championship matches on May 10. In other first-round Voyageurs Cup action, HFX Wanderers overcame League 1 Ontario side Guelph United 2-0 to move onto the quarter-finals to face Toronto FC. Concurrently, York United advanced thanks to an 7-6 penalty shootout victory following a 1-1 draw with Atlético Ottawa.

Wednesday will see Valour take on Vancouver Whitecaps to see who will face Cavalry in the next round.

“This is the great thing about cup competitions – you have to plan for either or,” Wheeldon Jr. said. “I know Valour had a great victory at Atlético [a few weeks ago] and set the score line of the season so far. I know [Valour head coach] Phil dos Santos going to his old employees probably gives him an added incentive.

“For the Whitecaps, they’ll have added incentive because they’re oh-and-two against CPL sides. I know it will make for a cracking game. We’re looking forward to watching it, knowing we’re in the next round to play the winner of either of them.” 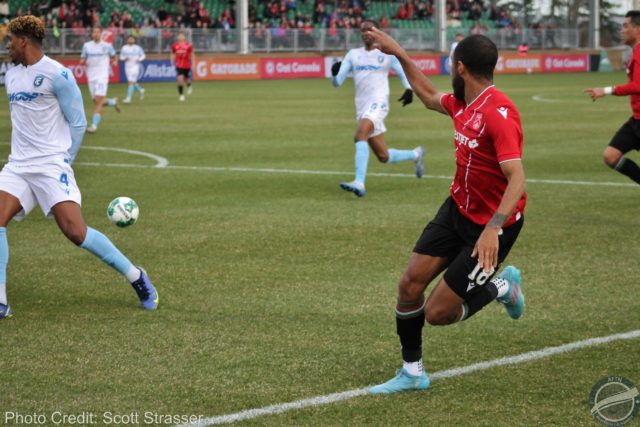