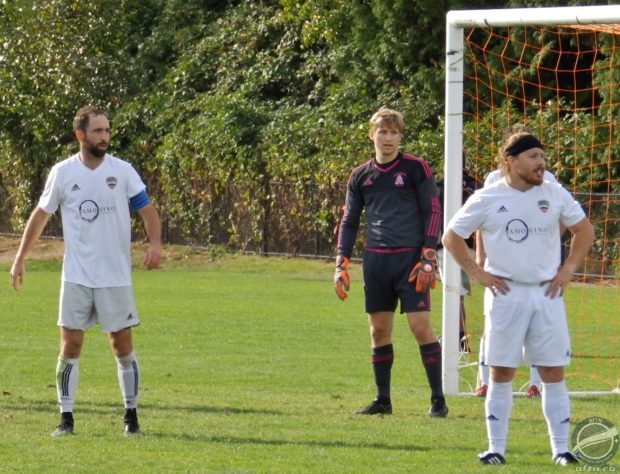 The 2021/22 Vancouver Metro Soccer League (VMSL) season may be coming to a close but with Imperial Cup final spots and Provincial Cup places on the line, and a fierce relegation battle going down to the wire, there’s still a lot to play for in the next couple of weeks.

The VMSL Premier Division action was back on the pitch this past weekend and the battle to avoid the drop took an interesting turn, with one team taking big strides to securing their top flight safety and another giving themselves a last ditch lifeline.

That team was second bottom NVFC Norvan, who headed to Ambleside on Friday evening for a North Shore derby with West Van FC, coming away with a massive 4-2 victory to draw them level on points with third bottom Pegasus.

Norvan knew they had to get something from this one and they came out like a team possessed to go into half time with a three goal lead. Jeremy Monn-Djasngar put them ahead in the 13th minute, with Bjorn Borren doubling their lead just past the half hour mark. Borren hit his second two minutes before the break to send Norvan into dreamland.

And that was how it stayed until a crazy final ten minutes. Christopher Damian pulled one back for West Van in the 81st minute, then Alan McIndoe made things very interesting when he reduced the deficit to one in the 89th minute. But before it could be squeaky bum time for Norvan, Adam Swanson restored their two goal advantage seconds later and they held on for a big three points in their battle to avoid the drop.

West Van were looking for the three points themselves to try and secure a Provincial Cup place, but they’ll have to wait a little longer to try and get that sewn up.

Inter EDC and VUFC Hibernian played out a 1-1 draw at Burnaby Lake on Friday night. There wasn’t a lot to write home about in this one, with Andres Rojas Rodriguez putting Inter ahead in the 30th minute, with Connor Mrazek replying for VUFC on the hour mark.

Inter have already secured one of the league’s six spots in the Provincial Cup. VUFC have as well, but have withdrawn to focus on school and the upcoming L1BC season.

VUFC’s withdrawal and the results of the Imperial Cup quarter-finals have seen BCT Rovers Hurricanes also secure one of the six Provincial berths and they closed out their league season at Newton Stadium on Friday night, going down to a 3-1 defeat to Premier champions BB5 United.

Daniel Sagno is back in the fold for BB5 and he opened the scoring in this one just five minutes in. Mark Talisuna made it 2-0 seven minutes later and that was how it stayed till half time. Golden Boot leading Nick Soolsma grabbed his 27th of the campaign in the 52nd minute to pull one back for the Hurricanes, but Talisuna wrapped up the three points for BB5 with his second of the night with 15 minutes to go.

The weekend’s action closed out on Sunday night as Burnaby Selects White Eagles also secured their Premier Division status next season with a 2-0 win over the already relegated MAFC Elite.

Vuk Erbez opened the scoring for the White Eagles in the 69th minute and Mladen Ljumovic secured the three points nine minutes later.

That win gave the 9th placed White Eagles a four point breathing space over both SFC Pegasus and NVFC Norvan as they fight to avoid a relegation playoff match. 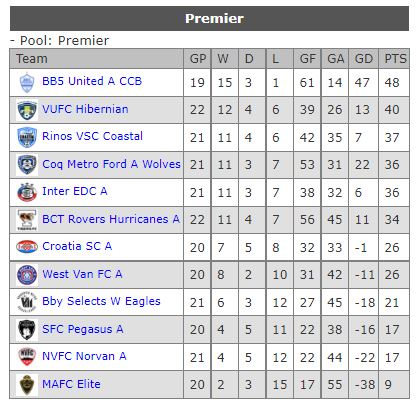 With just a couple of games to go, White Eagles may need to win their last match at West Van on Tuesday night to make sure they avoid that relegation playoff. Pegasus would need to win both of their remaining matches to catch and possibly overtake the Burnaby side, but they themselves face a huge relegation six-pointer at home to Norvan on Friday night, with whoever loses that one very likely to face automatic relegation.

There’s three league games and both Imperial Cup semi-finals on the slate over the next five days, in what should be a cracking weekend of football. Here’s how it all lines up: 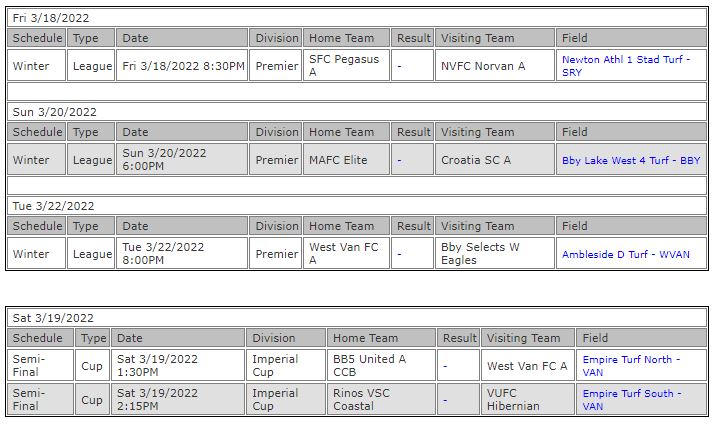