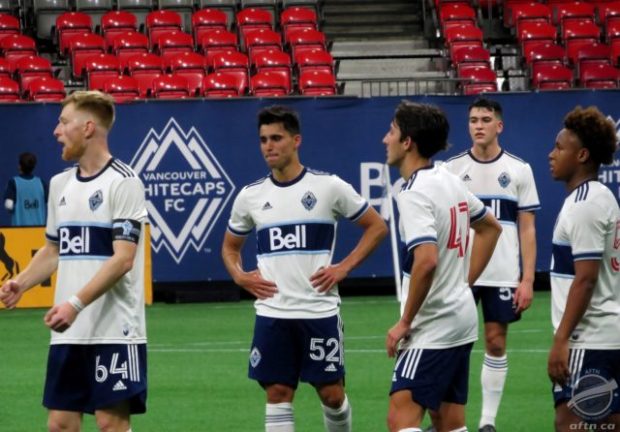 We’re going to run a series of articles profiling the squad in the build up to the season kick off, and we’ll be bringing you coverage of the team and the league all season long.

We kicked things off in Part One with a look at five players (going alphabetically from those officially announced in case anyone was wondering) – Owen Antoniuk, Elage Bah, Emiliano Brienza, Lucas Dasovic, and Vasco Fry. Here’s a look at another quintet, with a defensive bent this time around. 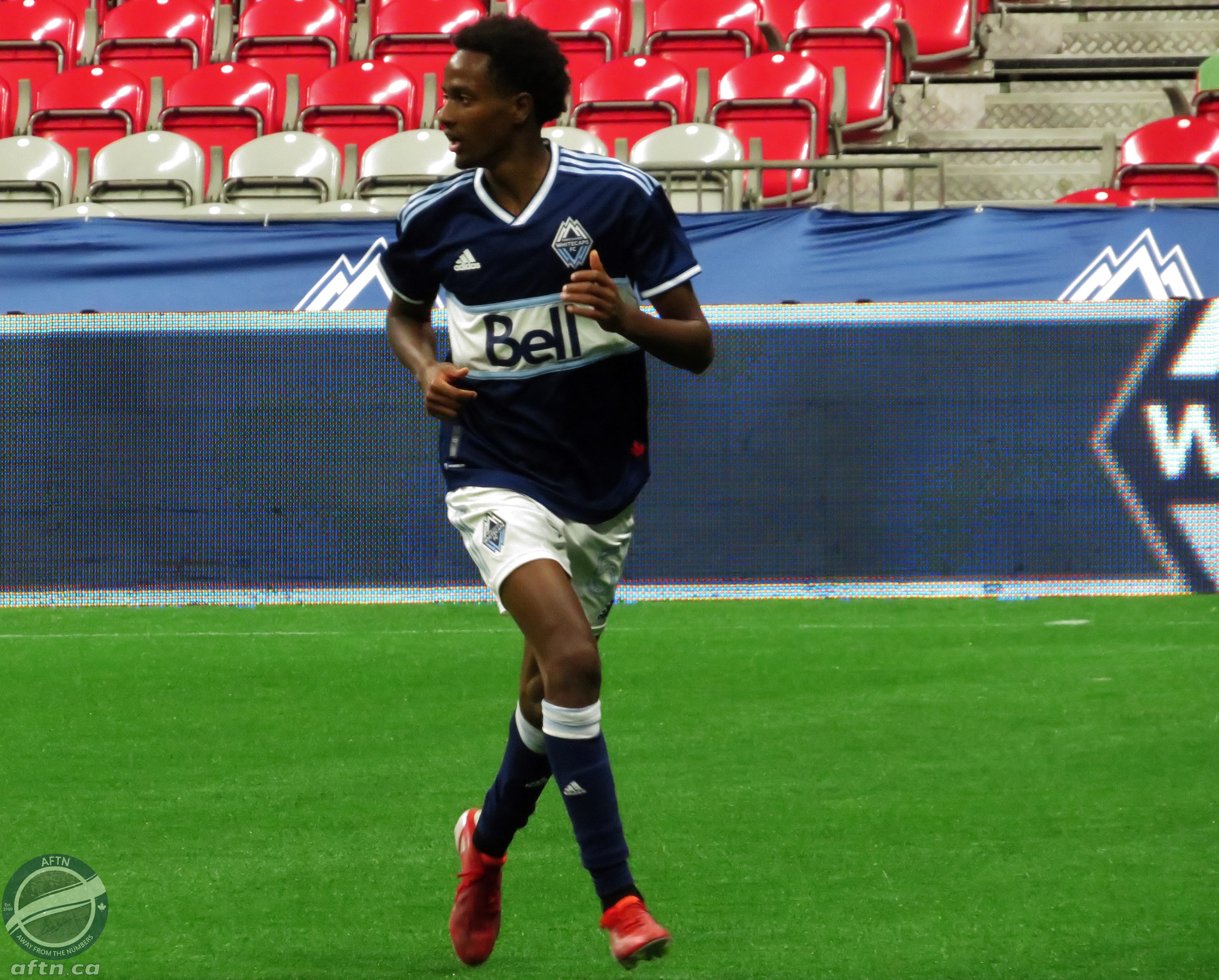 Born in Toronto, Ali Ahmed made the move west to the Whitecaps in August 2020 and has impressed the management team considerably in his short time here.

The 21-year-old can play in a variety of positions and while primarily used in the midfield for the U23 side, he can also play as a fullback, wingback, and winger, and was used in the recent Blues v Whites preseason game at BC Place as a right-sided wingback.

Ahmed spend last year with the ‘Caps U23 side, playing in a number of friendlies across Canada and scoring this cracker of a goal in the 1-0 win over Calgary Foothills in July.

Ahmed has featured in the last two preseason camps for the Whitecaps, travelling down to San Diego this year and getting some minutes in the club’s friendlies down there. He’s an exciting one to watch and highly thought of in the organization. 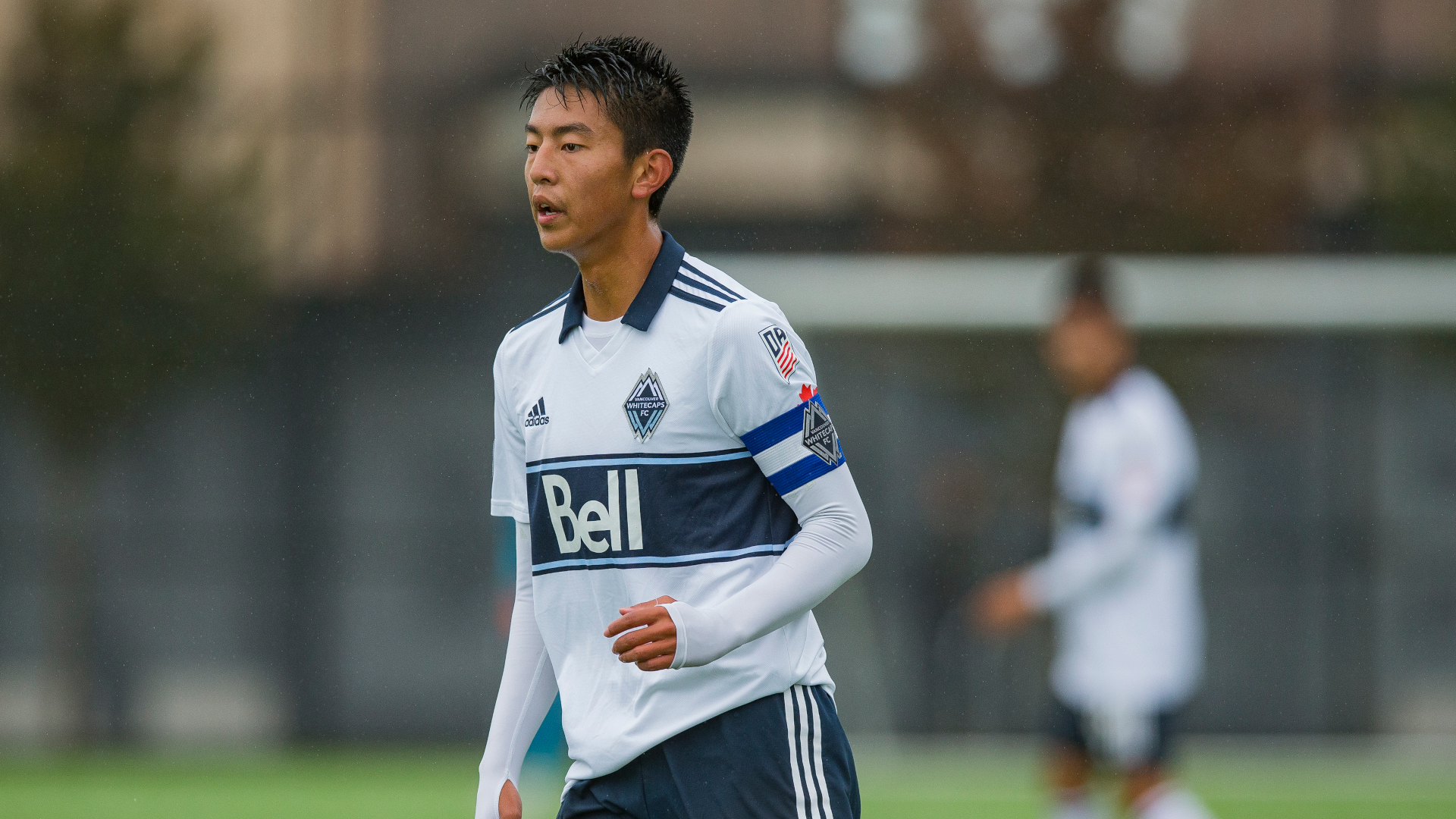 WFC2 will be a homecoming for Christopher Lee, who first joined the Whitecaps academy as a 14-year-old in August 2015 after a youth career that saw him play with West Vancouver and Mountain United on the north shore.

Starting off in the U15s, Lee moved up through the academy ranks before finishing his time in the academy with U19s in the curtailed 2019/2020 USSDA season. His final years with the Whitecaps academy also saw him move up to the team’s U23 development squad, playing in a number of friendlies, including trips to Mexico and South Korea, the latter of which saw him miss his high school graduation in June 2019 along with a couple of other players so the team had a ceremony for them down in Korea make up for it.

The talented 20-year-old left-back, who can also play in a defensive and central midfield role, decided to go down the college route, committing to the University of British Columbia but his first U Sports season with the Thunderbirds was cancelled due to Covid.

UBC head coach Mike Mosher was delighted with landing Lee, commenting at the time that “He’s a great fit in our program in so many ways – a very technical and intelligent left sided player. He has great versatility in that he can play as a left back or in central midfield.”

His time at the ‘Caps academy had already put him on the map of the Canadian Premier League scouts and Pa Modou Kah selected Lee with Pacific FC’s first pick in the 2021 U Sports draft. After impressing in training camp, Lee was signed to a developmental contract ahead of the 2021 CPL season, going on to make three appearances, all of them starts, two against HFX Wanderers and one against FC Edmonton, before returning to school in August last year.

His first college season for the Thunderbirds saw him made 16 overall appearances, primarily in the left back role, adding three assists, as UBC won the Canada West championship and made the nationals. No goals but he did score a stunner of a free kick for the Thunderbirds in a pre-season friendly against FC Tigers, so he has that in his arsenal too, and is very attacking up the wing, certainly adding a bit of bite to the attack.

This is an exciting next step for Lee, who certainly didn’t look out of the place in the higher level of the CPL and would have been welcome back by Kah for the 2022 CPL season. He’s chosen to return to the Whitecaps gold and will certainly be one of the most interesting players to watch develop on this squad. 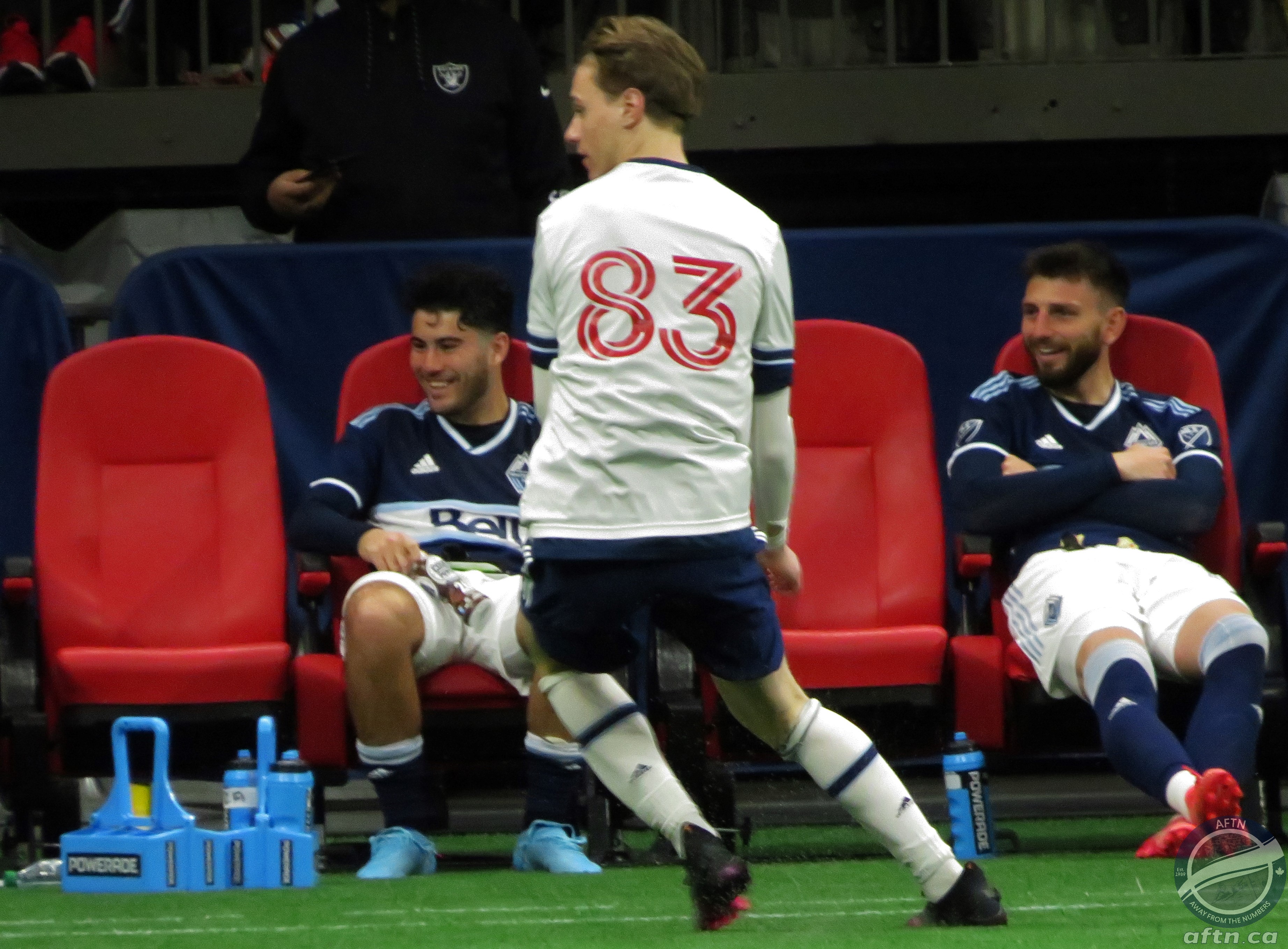 Another one of the youngest players on the squad, 17-year-old Finn Linder is a centre-back prospect out of Calgary, making the move west to the ‘Caps MLS academy in Vancouver in August 2020, having previously been a part of the Whitecaps’ Alberta Academy Centre in Calgary since December 2017, joining up with the U16 squad there a year or two earlier than others in the group.

A ball-playing central defender, Linder has been a standout talent from an early age, coming through the Calgary Blizzard youth program, going over to England in the summer of 2017 for a training stint and some matches with Wigan Athletic U14s, along with Will Antoniuk, the brother of fellow WFC2 player Owen and another member of the Whitecaps academy.

This past year has seen Linder play in friendly matches with the Whitecaps U23 side, along with playing regular matches for the U19s in the FVSL Premier Division. I would expect to see Linder split his time this summer with both the ‘Caps MLS Next Pro and L1BC sides, earning the majority of his minutes with the latter. 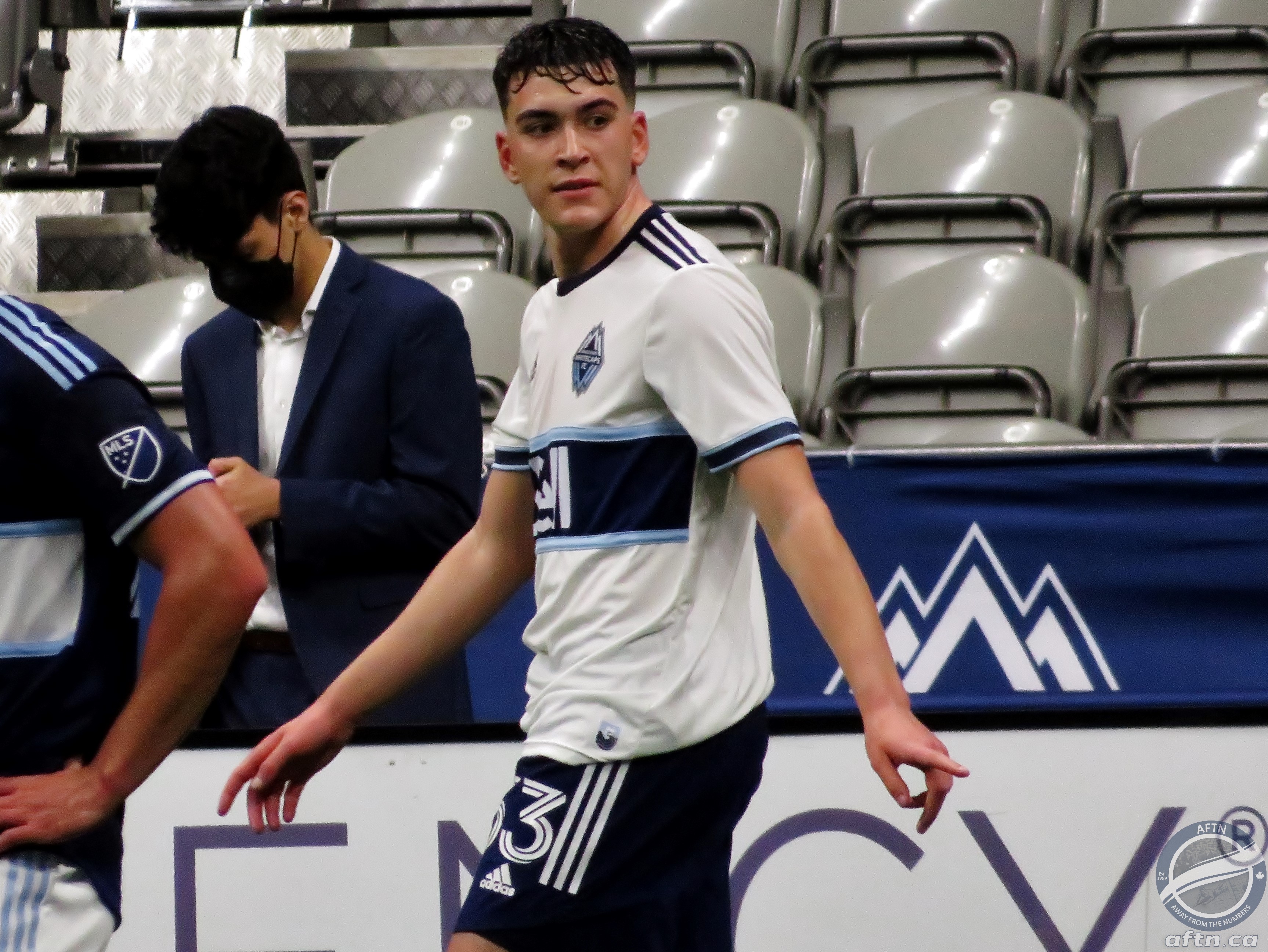 20-year-old centre-back Simone Masi is another top academy prospect having moved into the Whitecaps system from a very successful BCSPL Mountain United side in August 2019, after winning U15 and U17 Provincial titles with the Burnaby club under Nick Dasovic.

Before joining Mountain, Masi played his youth football with the Italian Canadian Sports Federation (ICSF), Cliff Avenue, and Coquitlam Metro Ford’s HPL side, and played at the 2014 BC Summer games along with representing the Team BC side, captaining many of the teams.

The 6-foot-2 right footer was having a strong debut USSDA season for the U19s before Covid curtailed it, and that was to be his one and only year in the ‘Caps academy, moving on to college with Simon Fraser University in NCAA Division 2.

When his commitment was announced in January 2021, SFU head coach was delighted to land the local lad and what he would mean to his team.

“He is a big athletic centre back. He loves to defend and he is great in the air. He has the right mentality and we think he will come in and be able to play right away. He will come in and make our centre back position better and more competitive so we are excited about that.”

Masi had a stellar rookie season for SFU last year, starting all 16 matches and contributing one goal and one assist. His performances earned him a spot on the 2021 Great Northwest Athletic Conference Men’s Soccer All-Conference First Team, the only Freshman to do so, and the 2021 NCAA Division II Conference Commissioners Association All-West Region Team.

Outside of soccer, Masi was on his school’s track and field team, excelling at long distance and cross country running, so I don’t think we have to worry about his endurance or athleticism, and also played the other kind of football and basketball. Defensively, WFC2 look to have some exciting pieces for playing with a back three, and Masi is one of those pieces. 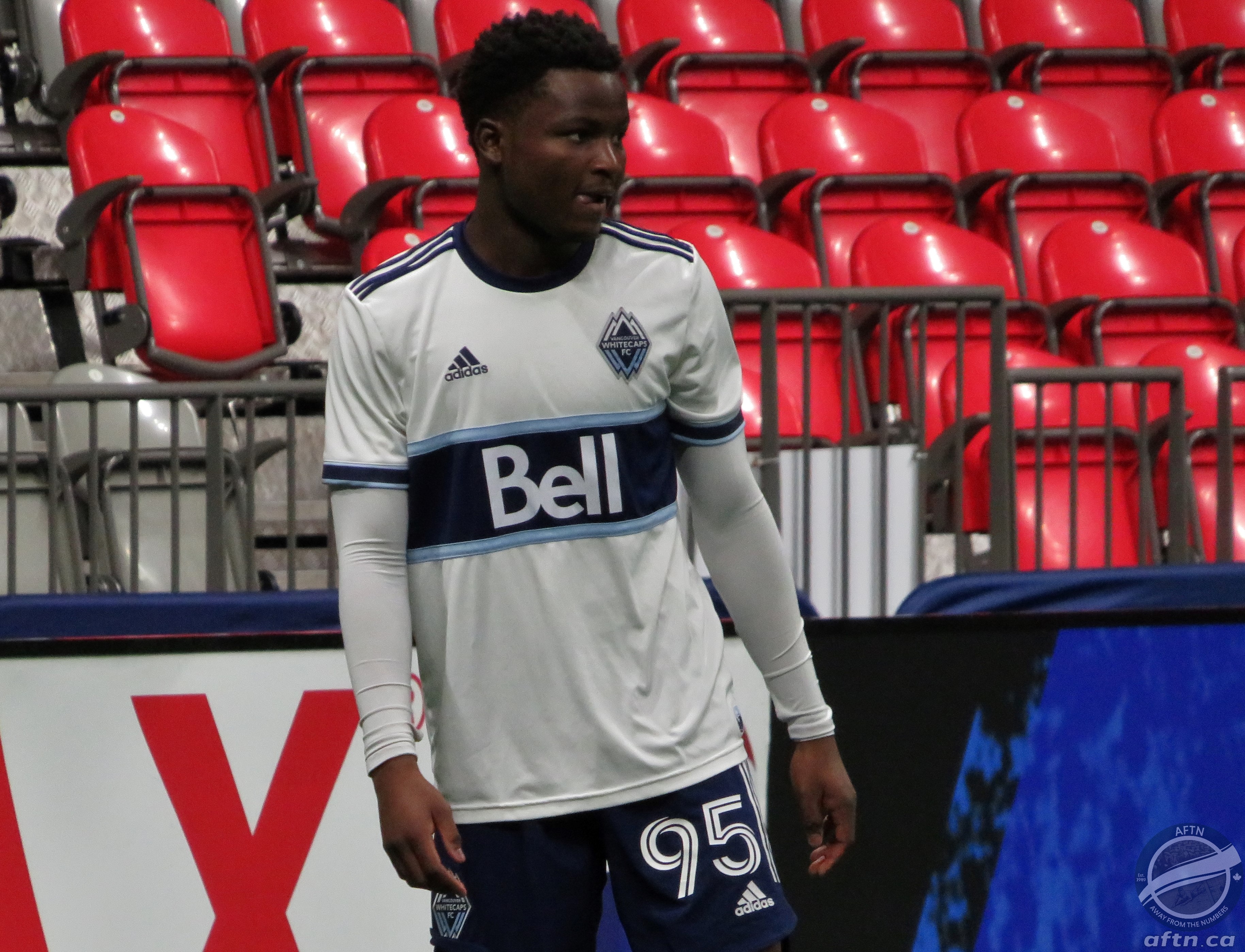 Joshue Ndakala first came to the Whitecaps as a 13-year-old prospect back in 2018, immediately joining the higher age group in the U15 squad. The following season saw him earn some playing time with the U17s and this last year the 17-year-old, who will be turning 18 next month, has been playing with the U19 team in the FVSL Premier Division.

With a youth career in Edmonton at St Nicholas Soccer Academy, Born To Be (BTB) Soccer Academy, and the Edmonton Strikers, Ndakala has been considered by some to be one of the best centre-backs in his age group in Canada over the years.

Originally a striker, the coaches at the Born To Be Academy saw his potential as a centre-back due to his tough tackling style and the offensive aspect he can bring to that position. The switch was made and Ndakala hasn’t looked back.

Ndakala is a hard-working and humble player who has impressed many of his coaches along the way with his work ethic and keenness to learn and improve, still training with the BTB Academy when he returns to Edmonton in the summer months.

A rock at the back, he can be a threat at set pieces in the opposition box, scoring two goals for the U19s in the FVSL this season. Much like Finn Linder, Ndakala’s playing time will be split between WFC2 in MLS Next Pro and the U19s in L1BC, but he’s definitely a player to keep an eye on.