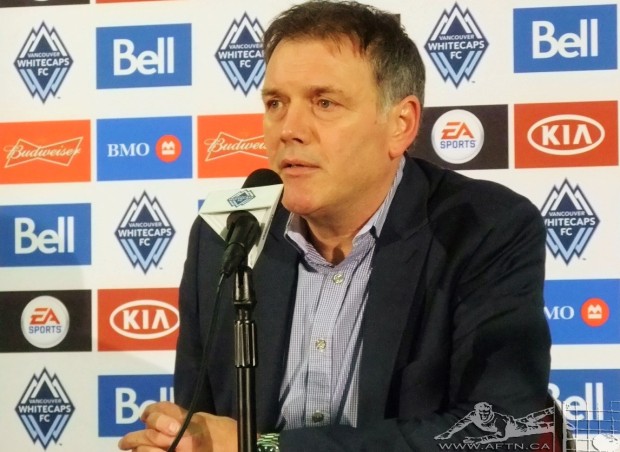 Such a strange subject, for depending on who you discuss with it (and we’re talking football people here not the lady serving at your local fishmongers!) it’s a topic that will either draw heated discussion and be a real hot potato issue, or one that exudes complete indifference.

We should all care. It’s our country, it’s our domestic game, it’s our future talent pool.

But just how much we should care does somewhat rely on where you stand on the whole club v country debate.

We’ve made our feelings known on this a lot over the years. That’s a debate (again) for a whole other day, but in summary, we’re always club before country. Whether that be my home one of Scotland or my adopted one of Canada, that feeling is the same.

We’re a Whitecaps site. Ultimately, we don’t care what country the Whitecaps players come from, we want to see a winning side and the best players making the squad and getting the playing time because of their talent, not their passport.

That said, we also absolutely love it when “one of our own” makes it and a youth player we’ve followed, talked to and supported from the Residency ranks comes through the pathway to the first team. That’s why this site is packed with coverage of the ‘Caps USL, U18 and U16 teams.

For others, country comes first and Canadian clubs, whether at MLS, NASL or USL level should primarily be concerned with developing homegrown talent to help the national team and help Canada qualify for another World Cup. Always easy to say when it’s not your money being spent on running said club.

And for those people, the Whitecaps can do no right. How dare they play South American talent when there’s Canadians that should be playing? How dare they actually do what they exist for and try and win trophies and make playoffs by playing their best players?

The irony of it all, is that if you look at the Whitecaps developmental pyramid and its aims, the national team actually sits at the top of the pyramid, with the MLS team nestling in underneath. That doesn’t fit their narrative though.

Homegrown player development has been at the forefront of the Whitecaps since the current ownership group took over. The club deem it as a success goal but feel that it’s still very much an ongoing process.

“Once Greg Kerfoot and Jeff [Mallett] and the two Steves [Nash and Luczo] got involved, it was really a primary focus for us,” Whitecaps President Bobby Lenarduzzi told media at an executive roundtable on Monday. “We wanted to be a club that developed players and as a result of that, we invested significantly in it. I think we have been trailblazers in MLS.

“When we entered the league, our questions were actually related to what can we do with player development and we were actually getting back from them not a lot of information because clubs hadn’t been interested in developing players. When you look at what’s going on now, I think we were the catalyst to get that going.”

The ‘Caps admit that it hasn’t all been smooth sailing and there have been errors made to get to where they are at right now.

“In our regard, we started up and I can be the first to tell you that we made mistakes along the way because we didn’t have a model in North America to follow,” Lenarduzzi added. “We couldn’t emulate what they do in Europe because they don’t have scholarship opportunities there.

“They have infrastructure, they have league play. We didn’t have any of that. So we’ve actually come a long way in that regard and I think we’re starting to see the benefits of that now.”

The Whitecaps now lead the league in homegrown talent on their MLS roster, a stat Lenarduzzi says makes him “very proud”. It currently stands at eight and counting. The ultimate goal is to have 50% of the MLS roster made up of homegrown, developed players in a five to ten year timeframe.

This season is shaping up to see the highest percentage of minutes played by Canadians for the Whitecaps in the MLS era (get all the stats on that on the excellent Out Of Touch blog).

Again, that doesn’t fit the whole narrative for those that feel that the Whitecaps don’t do enough (anything?) for Canadian soccer.

Neither does the excellent work done by the ‘Caps in their Residency program in producing the talent that packs Canada’s U23, U20 and youth teams.

It’s at national team level that the naysayers point figures. Why aren’t the three Canadian MLS clubs packed to the brim with Canadian players? That’s what Benito Floro certainly feels judging by his pre-Gold Cup media conference call where he described MLS as “a foreign league” out to help the “American program”.

“We have three teams who are playing in MLS,” Floro added. “But only two or three players are starting. That’s a bad position for us, no?”

To be fair, he is correct. But is that the fault of the clubs or a good indication that the players aren’t good enough for that level compared to who else is on their squads?

If he wants the answer, he should look at his recent results with Canada.

Right now there are 10 MLS players on Canada’s Gold Cup squad. Only one of them is a Whitecap, Russell Teibert, and he’s not a starter under Floro. So is that the ‘Caps fault as well?

The solution for Floro is a Canadian league. That would also appear to be the path that the Canadian Soccer Association want to go down. All the murmurs points to the CSA establishing a D1 Canadian league, with an announcement imminent.

Canada DOES need a national domestic league. Just not a top tier one. There is no way it can rival Major League Soccer right now, despite what the fantasists and idealists would have you believe.

A 2026 World Cup bid aside, a domestic league is the only way to grow the game here and have a decent place for young Canadian talent to play and develop when they’re not good enough to be part of the Whitecaps, TFC or Impact set-ups.

As far as Lenarduzzi is concerned, going for such a top tier league right now is not the correct way to go.

“As far as a domestic league goes, we have a USL team,” Lenarduzzi said. “We have teams below our MLS teams that are developing players and, in all three [MLS club] cases, the majority of players that are playing in those teams are young Canadian players.

“So if we’re talking about the short term and the lack of MLS players on the Canadian roster, that’s unfortunately a short term view because it’s not going to happen overnight. It takes time to develop players.

“So in terms of four and eight year cycles, I think the next one you’ll see some of the players from the Canadian teams as part of that national team that are currently trying to qualify. The next cycle, my hope is that if we’re all doing our jobs properly that there’s going to be more players to pick from.

“As far as the Canadian league option goes, I don’t think there’s a real need for it quite frankly.”

You can picture the pitchforks being readied in some circles already!

But he is correct. A D1 league does not instantly make these players world beaters overnight. Neither does playing against players of a similar ilk. They need to be challenged by top talent and be exposed to CONCACAF players and their style to succeed at international level. A D2 or D3 tier development league, in addition to the existing NASL and USL clubs would seem to be the more realistic way to go. Even having Edmonton and Ottawa moving to this new Canadian league would make sense and run it as a tier below MLS.

And talking of the USL sides, the initial rumblings around the new Canadian league seem to indicate that the CSA want to have teams in the three big markets of Vancouver, Toronto and Montreal. Support and sustainability-wise, Vancouver would struggle to support a new side as far as we’re concerned, so could there be pressure or a mandate from the CSA to force the ‘Caps to move their USL team to a new Canadian league?

“That’s probably a question that you should ask the CSA,” Whitecaps Vice President of Soccer Operations Greg Anderson told us. “But I don’t think it’s something that they can mandate. We’ve had sanctioning of our USL team and I’m sure it’s something that we could work through with the CSA if they wanted to take that step to start the league.”

While many would have you believe that the CSA are unhappy with the Whitecaps for their perceived lack of commitment to the Canadian program, the relationship between the two parties is in fact strong.

“I think it’s good,” Lenarduzzi said. “From our perspective, as a club, and the three MLS clubs, someone has to develop the players and you’re not just going to snap your fingers and have development emerge overnight.

“So there needs to be a patience there. We’re all relatively new at it, but I do think over time, there will be the fruits of the labour that will start to be clear. Russell Teibert is a great example of that. Sam Adekugbe is another example of that.”

You can also add in the likes of Kianz Froese, Marco Bustos, and others, who are just going to get stronger as the years go on and undoubtedly play their part for both the ‘Caps and Canada.

The Whitecaps are more than doing their bit for the development of Canadian soccer. Don’t let the naysayers tell you otherwise.