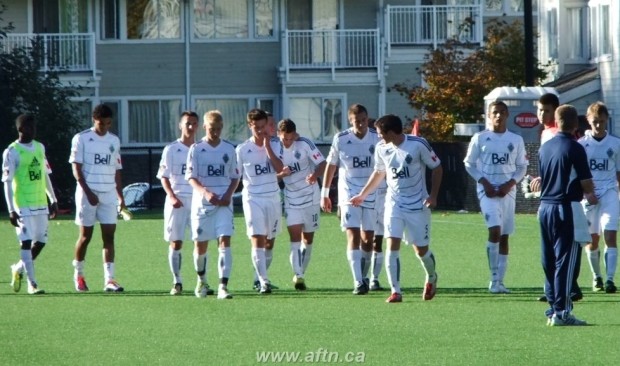 We’ll be rounding off AFTN’s annual Residency Week tomorrow with our traditional ‘Ones To Watch’ feature, but before we get to that, we thought it would be interesting to look back at the Whitecaps Residency Class of 2012.

The ‘Caps U18 team that year was one of the best the academy has graduated.

Craig Dalrymple took his side to Houston for USSDA Finals Week, topping their group after a 4-1 win against North Carolina Fusion, a 4-2 win over De Anza Force and 1-1 draw with Colorado Rapids. That was enough to give them seven points and advance to the Championship game against FC Dallas.

And it was to be a case of so, so close for the Whitecaps in that game, as they led twice before all of their exertions for the week in blistering heat started to take their toll and they lost the Championship 3-2 to an 84th minute Dallas winner.

Here’s some highlights of the match:

The ‘Caps team for that Championship game was as follows:

So we thought it would be fun to take a look at just where the 18-man squad are today. Was their talent and potential realised? Who made it to the pro ranks, who went the college route and who are still developing their skills?

Well the first thing to note is that four of the 18 players now have MLS contracts with the Whitecaps (and another one previously did), while three of the players are playing in Europe and a further eight are grabbing an education and playing in the college ranks in the US and Canada before seeing where their football career may take them.

SAM ADEKUGBE – Signed a homegrown MLS contract with the Caps at the end of August 2013. Has gone on to play 899 minutes for Vancouver in Major League Soccer, making 12 appearances, nine of them starts. Looked to have dislodged Jordan Harvey as the team’s starting left-back this season before injury hit. Has gone on to play for Canada at U18 and U20 level and made two appearances for the senior national team in friendlies against Mauritania.

BRYCE ALDERSON – The 2010 and 2011 Canadian Under 17 Player of the Year had already signed a MLS contract with the Whitecaps under Martin Rennie in November 2011. Opportunities were hard to come by for Alderson with the Whitecaps and their depth in the DM position. Turned down an offer of a new contract in the past offseason and headed to Europe, where he is currently playing for Fortuna Dusseldorf II in the Regionalliga West after joining them just last month.

WESLEY CAIN Went the NCAA route and has just finished his Junior season with Wright State University Raiders. Lead the team in scoring in his Freshman year with ten goals, adding a further two in 19 games of his second year and two in 21 games this season just past. Will enter his final Senior season this fall.

MARCO CARDUCCI – An unused sub for the Championship game, it shows you just how much faith the ‘Caps had in the young keeper since he only actually graduated from the Residency program this week, three years later! Signed a MLS contract with the Caps in 2014 and made two starts in the Canadian Championship games against Toronto. Split his time this season between U18 and USL action with WFC2.

CALEB CLARKE – Had just signed a Generation Adidas homegrown contract with the ‘Caps three months before the Championship game in April 2012. Made a total of 15 minutes in two substitute appearances towards the end of that season, but hasn’t seen the pitch in MLS action since. Injury curtailed him then a one year loan deal with Bundesliga side FC Augsburg last year went well and he came back and signed a new MLS contract this past offseason. Currently seeing minutes in USL with WFC2, but his goalscoring form (a team leading six goals so far) may see him in the gameday mix for the first team at some stage soon.

SPENCER DEBOICE – Deboice hit the vital equaliser against Colorado to send the ‘Caps to the Championship game. His following season saw him suffer a season ending injury but after graduating from Residency he joined Alan Koch at SFU for the 2013 season before being redshirted. DeBoice left the Clan and transferred to Douglas College this past season, picking up a couple of PACWEST Men’s Soccer Athlete of the Week awards. Also playing locally in the Vancouver Metro Soccer League (VMSL) with ICST Pegasus.

YASSIN ESSA – Graduated from the ‘Caps Residency in the summer of 2013 after playing prominent roles with the U18s and PDL side. Seemed to be in the mix for WFC2 and was at some initial trials but didn’t make final camp. Has fallen off the radar a bit, which is a shame as he had a natural ability to score goals, but is playing locally with VMSL Surrey side CCB.

BEN FISK – Fisk hit two hat-tricks and seven goals during Finals Week, including the opener in the Championship game, showing again his potential. After several pre-season trials with the Whitecaps MLS team, including a loan to USL affiliate Charleston Battery, Fisk got fed up being overlooked and took his talents overseas to Spain. He signed a one year contract with Segunda Division B side Coruxo FC in August 2014 and has been having a great time down there both on and off the pitch, including four goals in 24 appearances. Fisk has been named to the Canadian national team squad for the forthcoming Pan-Am games.

TIM HICKSON Decided to stay in Canada when he graduated from the Residency and headed to the University of Alberta Golden Bears, where he has just finished his third year. Playing PDL this summer with Calgary Foothills in their debut season in the league and will head to Korea next month to represent Canada at the 2015 World Summer University Games.

CALLUM IRVING – We still feel he’s one of the ‘Caps best goalkeeping prospects and fully expect to see him in a Whitecaps shirt again when he graduates from college. Another to go the NCAA route, he will head into his Senior year with the University of Kentucky Wildcats come the fall. Grabbed the starting goalkeeper spot in his first preseason in Kentucky, but then lost out during the season. Made it his own though in his Sophomore year when he allowed on 18 goals in his 16 games, winning a slew of Conference honours. Really came into his own last year, becoming Captain of the side and registering a 0.77 goals against record. Won four Conference honours and made the 2014 NSCAA All-Region team. Expect even more from the stopper this fall.

CARLOS MARQUEZ – Had another year in the Residency program before graduating but injuries cost him most of the season. Joined Langara College Falcons in the PACWEST when he graduated, winning ‘Rookie of the Year’ honours. He has just completed his second year there. Played PDL with the ‘Caps and was trialling for the WFC2 team preseason but didn’t make the final cut. Is another playing locally in VMSL, with Vancouver Olympics.

BEN MCKENDRY – McKendry chose to go the NCAA route initially but came out of New Mexico Lobos a year early, in his Junior year, to sign a MLS homegrown contract with the Whitecaps just back in January. Scored 14 goals in his three years with the Lobos and was garnering a lot of collegiate honours and attention before the ‘Caps pull the trigger. Not yet featured in a MLS gameday squad, but his chance will come soon. Been a stellar regular with the WFC2 team this year, where he has two goals.

CARLOS PATINO – An unused sub in the Championship game. Patino moved back to Colombia when he graduated the ‘Caps Residency program in 2013, playing with U20 side Club Atletico Faustino Asprilla for a year. He returned to Canada and had trials with NASL side FC Edmonton but didn’t get picked up. Currently playing for Kitsap Pumas in the PDL, where the striker has played 503 minutes in his seven games to date.

ADAM POLAKIEWICZ – Polakiewicz graduated from the Residency after the Championship game and played some PDL for the ‘Caps. He initially moved to Poland and joined top division side Slask Wroclaw, but soon returned to Canada to play PDL with K-W United in Kitchener-Waterloo, Ontario. He’s with the club again this season and has made four appearances to date.

DECLAN RODRIGUEZ – Another of the NCAA ‘Caps, Rodriguez has just finished his Junior year with the University of Milwaukee Panthers. The midfielder has scored seven goals and added two assists in his three years with the Panthers and will begin his Senior season in the fall.

ALEX ROWLEY – Rowley went the NCAA route as well, but chose to stay in Canada and was a standout performer in the DM role for WFC2 coach Alan Koch at the SFU Clan. Just finished his Junior year where he has enjoyed two GNAC Conferences and three straight playoff appearances with the Clan, picking up a number of individual awards in the process. Played last summer with Victoria Highlanders in the PDL.

DANIEL STANESE – Stanese was a player who we’d have loved to have joined the ‘Caps but a decent contract was not forthcoming so he headed over to Europe after playing some PDL and Reserve games for the ‘Caps. He briefly joined German side FC Nurnberg, before signing for FC Augsburg II in 2013, where he remains to this day. He’s been capped for Canada at U17 and U20 level and earned his first senior cap in January this year as a late sub against Iceland.

JASON VAN BLERK – Headed to SFU after the Championship game before heading to SFU for a couple of seasons. Played 30 games and 878 minutes for the Clan, scoring one goal and adding one assist, before dropping off the team. Is playing locally with VMSL league and cup champions West Van.

So there you go. Certainly interesting (to us anyway!), to see how the guys career paths have gone since that big game. Will any more of them add to the number signing MLS or USL contract with the Whitecaps in years to come? Time will tell.