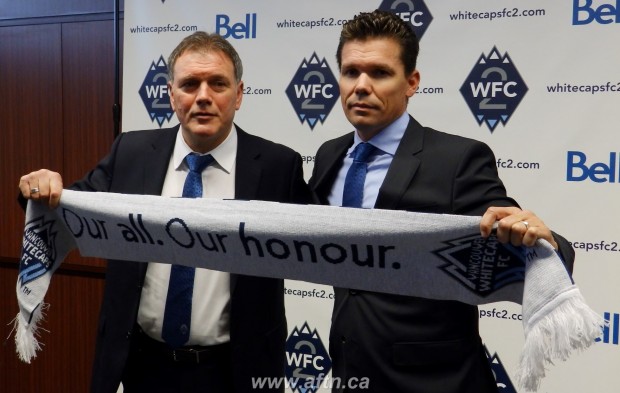 It’s been a lengthy search, but Vancouver Whitecaps have their new USL PRO head coach.

Koch has ten years of coaching experience at the college level and has recently been acting as the Whitecaps collegiate scout, attending both the recent MLS combine and SuperDraft with the club.

As far as Whitecaps President Bobby Lenarduzzi is concerned, that experience and his keen eye for talent, makes Koch the right man for the job.

“As is always the case, and it never ceases to amaze me, whenever a job opportunity comes up the amount of interest that we get from around the world,” Lenarduzzi told reporters on Friday morning. “Sometimes I think you tend to forget what’s right in front of you.

“In all honesty, when it came to Alan, we didn’t necessarily pursue him because we assumed he’s in a good job, he’s got security, would he want to take that chance and jump into the professional ranks where that same type of security isn’t necessarily there?

“But as a result of the work that he did on our college recruiting, he got to know our guys and we got to know him and it was a natural evolution. We were always looking at other candidates, but as time went on, it became clear that Alan was interested in the job and we were interested in him.”

Koch is well respected in the BC soccer community and has developed a very productive scouting network during his coaching career. His Conference winning Clan sides of recent seasons have had a heavy BC content, with a splattering of fine overseas thrown in.

The constant in all of his recruitment is an eye for young talent and the Whitecaps will be hoping for the same from their new coach with the WFC2 team, and Lenarduzzi is confident that Koch will help not just the ‘Caps but also the Canadian national team program.

“It’s a perfect partnership,” Lenarduzzi added. “He knows the market. He understands Canadian soccer and what we need to do in terms of ensuring that not only are the club sides successful but that our national team program has a chance to succeed.

“He’s going to be tasked in bridging the gap between the potential of those players and how far they can go, and ideally equipping them with the knowledge that will allow a number of those young players to actually graduate through to our MLS team.

“Right now we have eight homegrown players on our roster and our objective is to continue to add to that. Ideally we get to the point, and I think we’re early in the process, where those homegrown players are not only on the roster but contributing significant minutes to our MLS side, like Russell Teibert has done.”

Koch is a student of the game. Like Carl Robinson, he lives and breathes football. The pair are very similar in many ways, not least of all in their coaching philosophy and the way they like to play the game. From the time that Koch spent with the Whitecaps this past year, it was soon very evident that he and Robbo were on the same page in terms of the kind of player both wanted to see at the Whitecaps and that made Koch the obvious choice for WFC2.

“That actually started prior to the scouting because when we hired him, our coaching staff had a long sit down with him, just to get the feel for what he looked for in a player and the similarities were certainly there from the outset,” Lenarduzzi said. “As it went further in the process, it became clearer and clear that he could be a guy that came in and do what our senior coaches were looking for in transitioning those young players through to the MLS squad.

“We couldn’t have scripted it this way, simply because, again, we didn’t think that Alan would be interested in the job, but it was actually a long interview, in that it started with the college recruiting. There was no expectations on either side but as we were going through the process, both sides were thinking that this could be something, in Alan’s case “I’d like to do”, and in our case, we’re thinking maybe he could be the guy that could be our first Whitecaps FC 2 head coach.”

The Whitecaps USL PRO season will kick off at the end of March. There might be no schedule or roster available to get fans excited just yet, but Lenarduzzi is hopeful, and confident, that fans will turn out in numbers to support the club’s future.

“We hope that we can put 3000 people out here. It’s been a problem for us because we’ve had nothing to talk about up to now. We announced we were in two months ago. Now we have a head coach and we’ll soon have players.

“We want to create an environment at UBC, a mini environment to the one we have at BC Place, so it’ll be up to us. We can’t just assume that we can put a team out and there will be people that will turn up. We need to do what we’ve done with our senior squad and encourage people to come out and see the players of the future.”

As to what kind of Whitecaps team with the fans see on the pitch this season, Lenarduzzi feels that whilst development of the younger players will always be the prime concern, putting a winning and competitive team on the pitch is also important.

“As far as winning goes, and it’s easy for me to say that it’s not important if we push two or three players into our MLS squad that that’s the metric that’s going to determine how successful we are, but we’re in a game where winning is important. Winning actually dictates frame of mind.

“We want to get results, obviously, and we want to be competitive. That’s probably what we’re looking to strive towards. Be competitive but understand that the priority of this squad is for those senior players to get minutes but more importantly for those young players to get the kind of experience to have a better chance of making our MLS squad. Not just make our MLS squad but to get minutes in our MLS team.”