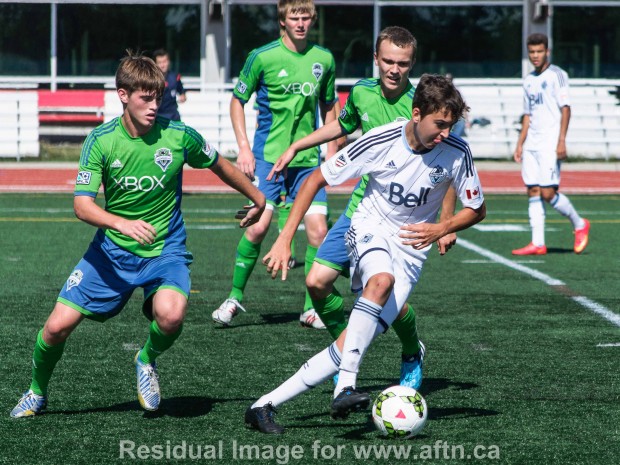 One of the key goals of the Whitecaps new USL side is to provide a place to play, develop and gain competitive minutes for their top young prospects. The crucial missing link between the Residency and the MLS first team.

A few of the current Whitecaps U18 players were expected to see some minutes of USL action with WFC2 this season and many more in seasons to come. One player in particular that we know Carl Robinson was keen to see at the higher level was striker Dario Zanatta, but with minutes in the pro ranks likely to be limited at first for the Victoria native, the 17-year-old has decided to quit the Whitecaps and pursue opportunities over in Europe in the next stage of his soccer career.

A loss for the Whitecaps, but a chance too great to pass up for the player. Zanatta flew out of Vancouver just over a week ago. Now that he’s had time to settle in to his new surroundings, AFTN caught up with the Canadian U18 international to discuss his time with the ‘Caps and what lies ahead for him now on his footballing journey.

Dario Zanatta is a goalscorer. A striker, who can also play in midfield roles, he joined the Whitecaps Residency program in September 2011 and has been productive on the pitch ever since.

As a 15-year-old, he led the ‘Caps U16s in the scoring department during 2012/13 with 8 goals in what was a tough developmental year for a very young team. Last season saw him split his time between the U18 and U16 sides, grabbing 26 goals in 28 games in the process.

Moving up full time to the U18 team this season, Zanatta and Marco Bustos have torn apart the opposition, as the young Caps were rated the number one team in the USSDA at one stage. The pair have scored 31 goals between them, with Zanatta netting 15 from his 19 appearances.

It was shaping up to be a potentially record breaking year for the player and the team.

When we last spoke with Zanatta back in May, his goal was to secure a professional contract and ideally one with the Whitecaps. With his form impressing Robinson and the formation of the new USL team, that looked pretty much a certainty somewhere down the line.

But things move quickly in football.

Unable to come to agree terms with the Whitecaps to continue his time in Vancouver, Zanatta has now made the bold decision to quit the club and jet off to Europe to continue his footballing career. It might have come as something of a shock to those who follow the ‘Caps Residency program, but it was a decision that had been a long time coming and deliberated over.

For some the timing might seem a little strange. Both the European and the USSDA seasons will be wrapping up in the next few months, so why not wait until the summer? But for Zanatta it was a case that this was actually the ideal time to head off and pursue his dreams.

“I finished high school a semester early so I had the opportunity to leave now and not have to wait until summer. I could have left in the summer but didn’t want to miss out on the opportunities I have now.”

Those opportunities have come in Europe.

“I have spent the last week in Sweden with the club IFK Goteborg, and will be here for another week,” Zanatta told us. “Hopefully if all goes well I will not have to go anywhere else for trials but if need be I have other clubs interested in me.”

IFK were the club that Darren Mattocks had a training stint with in January. The Goteborg scout had been over in Vancouver watching the Jamaican but had also taken in some Residency games in the process and liked what he saw from Zanatta.

A lot of young players in North America (as with elsewhere in the world) dream of getting a chance to play in Europe. Even the pros here like Octavio Rivero and Christian Dean have mentioned that is in their long term goals. Zanatta now gets the chance to do just that as a 17-year-old, which must create a gamut of emotions, especially as he has headed over there on his own.

“I am beyond excited to be in Europe, working on trying to live the dream that lots of young Canadian players also have, which is to play in Europe.

“I am by myself for right now until I find a club and get settled for a while. I am hoping that my parents will be able to visit me in the near future but I have lived away from home since i was 14 so I think I will be able to handle it.”

He’s not the first Whitecap Residency player to head off to Europe. Amongst them, Alex Comsia is in France, Ben Fisk is in Spain, Caleb Clarke headed off to Augsburg in Germany and Daniel Stanese is still there with the same team.

Dario knows all of the guys, so did he get the chance to speak to any of them about their experiences in Europe and if so, what did they tell him?

“I talked to Caleb lots when he trained with us for a few weeks at the start of the season. He told me what is was like during his time in Europe and how much he enjoyed not only the soccer but also living there. I also talked with Alex Comsia when he has come back to visit. He also really enjoys it, so hopefully it will be the same for me.”

Over here, players seem to be able to carve out pro careers when they come out of college at the age of 21, 22, 23. In Europe, a lot of guys are done if they haven’t shown their stuff by the age of 21.

A frightening stat I read recently was that around 10,000 lads are in the academy system in England. Only 1% of them will go on to make a living out of the game. And of those 18-year-olds given professional contracts, two thirds of them will be out of the pro ranks by the time they reach 21. Food for thought, but talent does prevail.

Zanatta has already impressed in Goteborg, playing 75 minutes for their Under 19 side at the weekend and scoring.

Dario turns 18 in May. With that desire to play in Europe, was the feeling there that now is the right time to try and make it there or, as crazy as it sounds, he might be deemed too old to get another chance?

“I felt that the earlier I left the better it would be,” was Zanatta’s take on that. “I will have more opportunists now. Age didn’t play a big role in my decision.”

As we all know, the ‘Caps have their new USL team all set to get underway this year, and a big part of that team is to help give playing time to their young talent, especially Residency prospects. Even if Zanatta was included in the USL mix this season, minutes were still going to be limited for him there. So was the prospect of getting more competitive minutes in a pro environment elsewhere a big factor in deciding to go to Europe instead of staying here?

“Playing time at a competitive level was a huge factor,” he admitted. “I knew for myself it was going to be very hard to get competitive minutes in the USL, especially knowing that I would possibly struggle with the physical side of the game, and also with first team players coming down looking to get playing time. I thought that possibly playing another season and a half with the U18 side wouldn’t be challenging enough for my development.”

And he’s right. We’ve seen it with the likes of Marco Bustos and Kianz Froese. The USSDA level wasn’t taxing enough for them at this crucial stage of their development. The ‘Caps clearly agree and Bustos told AFTN recently that he would no longer be playing with the Residency team going forward.

So did the Whitecaps get to the stage of actually discussing a USL or pro contract with Zanatta?

“Yes, we had discussions regarding a contract but it didn’t work out.”

Disappointing for both sides, so what was their reaction to Dario’s decision to leave the Residency program? Zanatta wouldn’t be drawn on that, only commenting “I can’t answer for them.”

What doesn’t appear to be likely is the door being left open for Zanatta to return to the Residency and/or the ‘Caps if he decides that Europe isn’t for him.

“We have always been told that if we left for trials that we would no longer be part of the program, but you would have to ask the Whitecaps.”

Zanatta has been with the Residency since September 2011. There’s a lot he feels he’ll take away from his time in the program and how it has helped develop his game.

“It has helped me develop big time and I wouldn’t be the player or person I am now if it wasn’t for them. It has helped me mature on and off the field, from playing with better players to having to live away from home and my parents.”

So what are his overriding memories that will stick with him from his time in the Residency? for Zanatta, it’s not a goal or a game but “All the teammates I have got the chance to play with.”

A new challenge now awaits Zanatta in Europe. To make it to that next level and succeed over there, Dario is aware of the things that he needs to work on most in his game.

“I think that I, of course, need to work on all the sides of my game to help me get to the next level. But the one I am needing to work on most right now is getting stronger and learning how to deal with the physical side of the game better, to be able to play with older players and men. I would also like to improve scoring off of crosses and keep working on holding the ball up in possession.”

So an exciting adventure awaits Zanatta and we’ll be following his trial in Sweden, and hopefully his next stage of his career with IFK Goteborg, with interest. It’s always tough to see a talented young player in the Whitecaps ranks have to move to elsewhere to try and make it, but often it is better for both the club and the player that it happens.

That certainly seems to be the case with Dario Zanatta.

It’s been fun watching him play with the U16s and U18s these past couple of season and we wish him nothing but the best for the future, and who knows, we may still see him in a Whitecaps jersey again some day.

So does he have a parting message for the ‘Caps fans and his former teammates?

“I thank the fans of the club that have supported me on and off the field and to my teammates I can’t thank you guys enough for not only being great teammates but also being some of my best friends and creating friendships that will last a life time.”