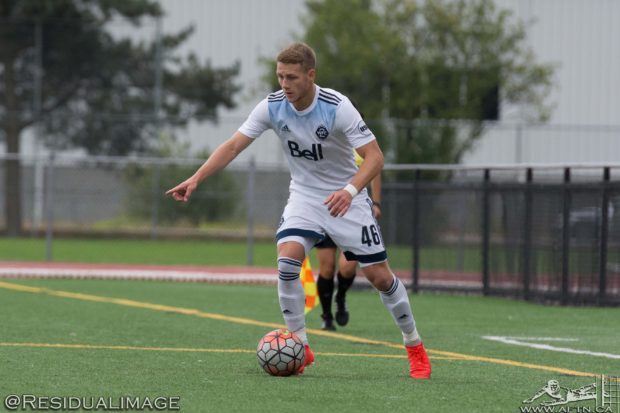 WFC2’s USL era got off to a pretty inauspicious start in March 2015. That’s putting it mildly. The 4-0 defeat at Seattle Sounders 2 was a wake-up call that trying to put together a competitive team at a week’s notice was not the best of ideas.

But the team bounced back, and had a mixed season, stringing together a few wins, but realistically off the pace from the start to the finish of the campaign.

When you look at the starting eleven and the subs from that first match in Seattle, to the team that won last Friday’s playoff game in Colorado Springs, it’s unrecognisable, and shows just what a monumental overhaul Alan Koch and his management took this past offseason. Seven members of the squad are no longer even at the club in any shape.

Standing out on the teamsheets of both of those matches, however, is one name – Brett Levis.

The Saskatchewan native has been the sole constant in this journey of change over the past two years, changing his own position in the process, from midfielder to left back. His play has earned him a MLS contract, and he’s “very proud” to be one of the first players to move on from the USL team alongside Alphonso Davies.

For Levis it’s the culmination of his own journey to earn a first team contract, and the beginning of a new one to consolidate his place in the MLS squad. But WFC2 holds a special place in his heart and what it has meant to his own footballing career.

“It’s helped a lot,” admits Levis. “It was my second year in the USL and it was just another step in my career coming through the CIS. It’s here for a reason and it shows with Alphonso and then me, it’s a stepping stone to MLS. It’s a bridge. It was a little bit harder a few years past when they didn’t have the USL [team]. You kind of got to that U-18 Residency and it was okay, do you make the jump? And the gap was quite big. This has helped a lot and hopefully more players move on.

“I was here playing with the PDL squad and the U23s. As I said, we didn’t have the USL team, so it was kind of do or die at that point. Then the USL got implemented and I joined that. The last two years have been amazing. I’m extremely proud to be a part of that kind of history.”

Levis’ journey started in 2013 when his play caught the attention of the Whitecaps while playing against them in the USL PDL for Victoria Highlanders. The next season he was a Whitecap, playing on Vancouver’s own U23 side, having been previously invited in for a training stint at the end of his first season with the Highlanders.

“[It was all set up when I was with] the Highlanders in Victoria,” Levis revealed. “At that time I was playing as a number 10. I had my breakout year in the PDL. I’d never played in that league before but that was kind of the transition from CIS. Martin Rennie was my coach at the time and he brought me over on a ten day trial.

“That was when a lot, well not a lot but a few, of these guys that are here just now were there at the time. So I got to know them a little bit. Kekuta [Manneh], Russell [Teibert], Erik [Hurtado] and stuff, and then the next three years I was brought in after PDL to train with them and then I was brought in last year into preseason, then switched to left back, and here I am now.”

Levis’ story highlights the importance of WFC2 to the Whitecaps young talent in a number of ways, but in his own particular scenario it afforded him the minutes to play, develop, and hone his switch to his new position, and the results have been excellent.

“If there was no USL and I did happen to go into preseason and sign with the first team, to get games like that in MLS or in the Champions League I feel would be a little bit tougher to learn that position,” Levis feels. “Again, it’s that bridge. A bridge between learning that position and not. It definitely helps you to gain confidence and gain experience at the professional level.” 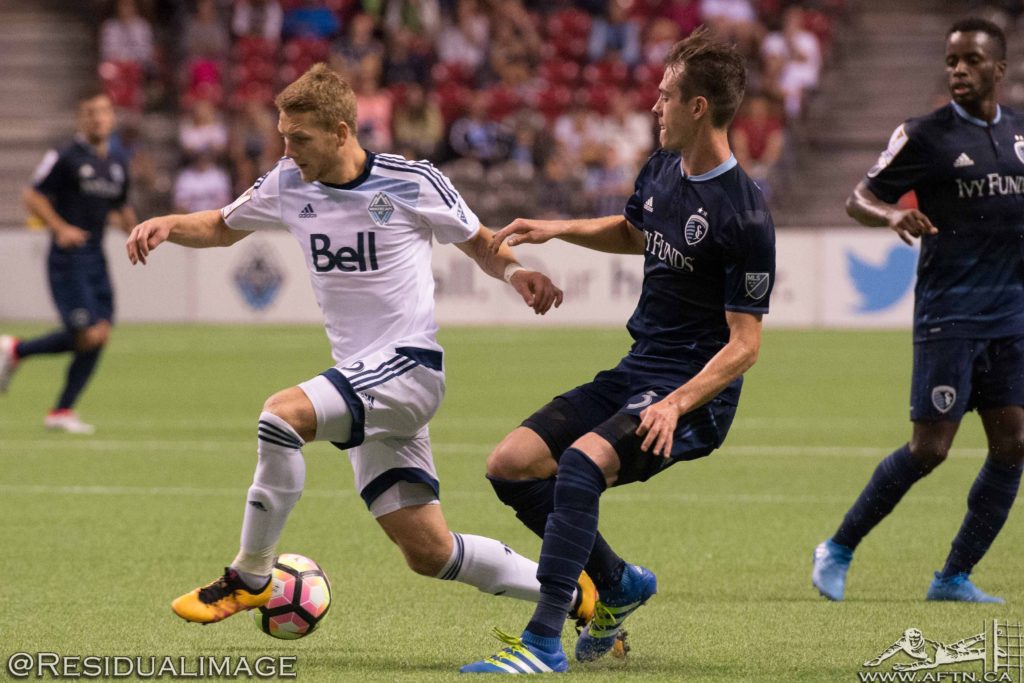 Levis signed his MLS deal on August 23rd, featuring throughout the Whitecaps successful CONCACAF Champions League campaign. He’s yet to make his MLS debut, but with the season over, depending on how the USL postseason plays out, he may get his chance in one of Vancouver’s two remaining games against San Jose or Portland.

For now, that’s at the back of his mind. His sole focus is to help WFC2 make more history by lifting their first USL Championship, and he’s hoping he can bring what he’s learned from training with the first team to the team in this playoff run.

“It’s just a lot quicker,” said of what he’s learned by training with the MLS side these past few weeks. “Not so much ball speed, but how quick you have to think of your next pass, your next shot, whatever the case may be. You just have to be that little step quicker and the more I train with the first team the better I’m getting with these one and two touch games and the speed of play.”

WFC2 face off against OKC Energy at Thunderbird Stadium at noon on Saturday in their Western Conference semi-final. Even those the ‘Caps saw off the Energy 2-1 in their final regular season game just two weeks ago, there’s certainly no complacency within the squad. They know the job in hand and they’re all determined to get it done.

And after a late season slump that saw the ‘Caps struggle over the playoff line after leading the Conference for most of the year, it feels like WFC2 are back in their stride and looking more like the team that started the season with a ten-game unbeaten run.

“Absolutely,” Levis said without hesitation. “Colorado is such a tough place to play. It was a playoff game and we won it and we made history at this club. Players are confident and I think that’s a good thing going in to this home game.”

As focused as the ‘Caps are on the visit of the Energy, it’s hard not to look a little further ahead after a weekend of upsets that saw four of the top five seeds in the West crash out. It leaves Vancouver the second highest seeded team remaining, and more than capable of beating their three rivals for the Western title. Levis isn’t letting any of that into his mindset however.

“One, two, and three are out, but OKC’s not an easy team at all,” Levis said. “We’re not going to go into this thinking they’re seeded below us and we just beat them at home a couple of weeks ago. We’re going to go in with every intention of playing as best we can, and working as hard as we can, and winning the game.”

The reality is, WFC2 are just three wins away from an USL Championship. It’s not something anyone really want to put too much attention on, but if you dare to let yourself dream, just what would that achievement mean to Levis and the squad?

“It would mean everything,” Levis said. “This team is like family. We’re all together on this. If we can make that push, whether it’s the way other results have gone in the past week or so, I think we’ve set ourselves up and have a really good opportunity to make it to the final and even win the whole thing. That would be awesome for the club and [to do it] with this group of guys, it would be amazing.”