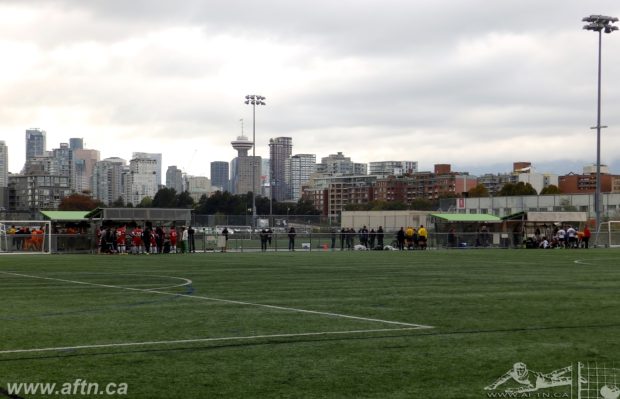 Week 4 of the 2016/17 VMSL season is in the books and it’s already starting to feel like a two horse race in the Premier Division.

Coquitlam Metro Ford Wolves and West Van FC both clocked up another win to lead the pack, with the defending champions from Coquitlam maintaining their 100% start to the season four matches in and keeping their two point lead over West Van.

Metro Ford came away with a narrow 1-0 win at Richmond Hibernian on Friday night thanks to a Juan Sanchez goal, while Jesse Fetterley and Robert Giezen gave West Van the 2-0 win over Pacific United at Ambleside.

Rovers Tigers United move into third spot after their 4-0 thumping of North Delta SC, with former TFC player Nick Soolsma taking his tally for the season to seven after another brace. Gary Badesha and Pavi Dhillon added the others.

Provincial Cup champions Pegasus have other things on their mind at the moment as they headed off to the nationals this week. They drew their first game 0-0 there on Wednesday against Edmonton Green and Gold. And it was another draw for the horsemen this past Friday, as Club Inter held them to a 1-1 scoreline at Newton. Jordan Michael scored for Inter and we think it was an own goal for Pegasus.

EDC Burnaby got their first win and points of the season when they beat Croatia SC at Burnaby Lake on Friday night. That victory lifted Chile off the foot of the table.

ICSF Columbus and Westside drew 1-1 in the sole Saturday game up at Empire.

Those results leave the Premier Division table looking as follows after the week 4 action:<.br> 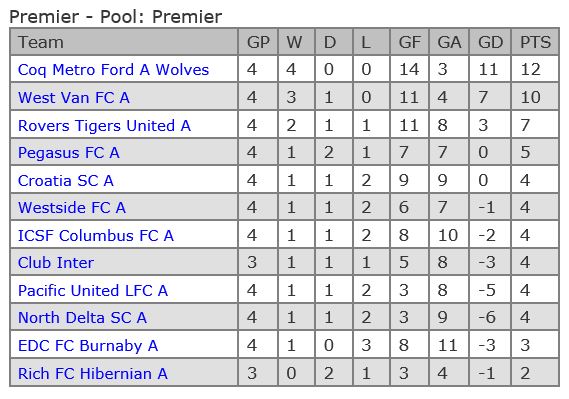 In Division 1, Akal have finally been expelled from the league after forfeiting their first three matches. The remaining 11teams will now have bye weeks for the times they were scheduled to face Akal and all previously awarded 3-0 scorelines have now been expunged from the records.

That means previous leaders Binger’s Army have lost top spot for now, but they remain unbeaten in second place after their 0-0 draw with Rino’s Vancouver on Saturday, and have a game in hand.

We headed along to Trillium on Saturday afternoon to take in the barnstorming action in the Rino’s derby between Tigers and Fury, where it was raining in more ways than one. 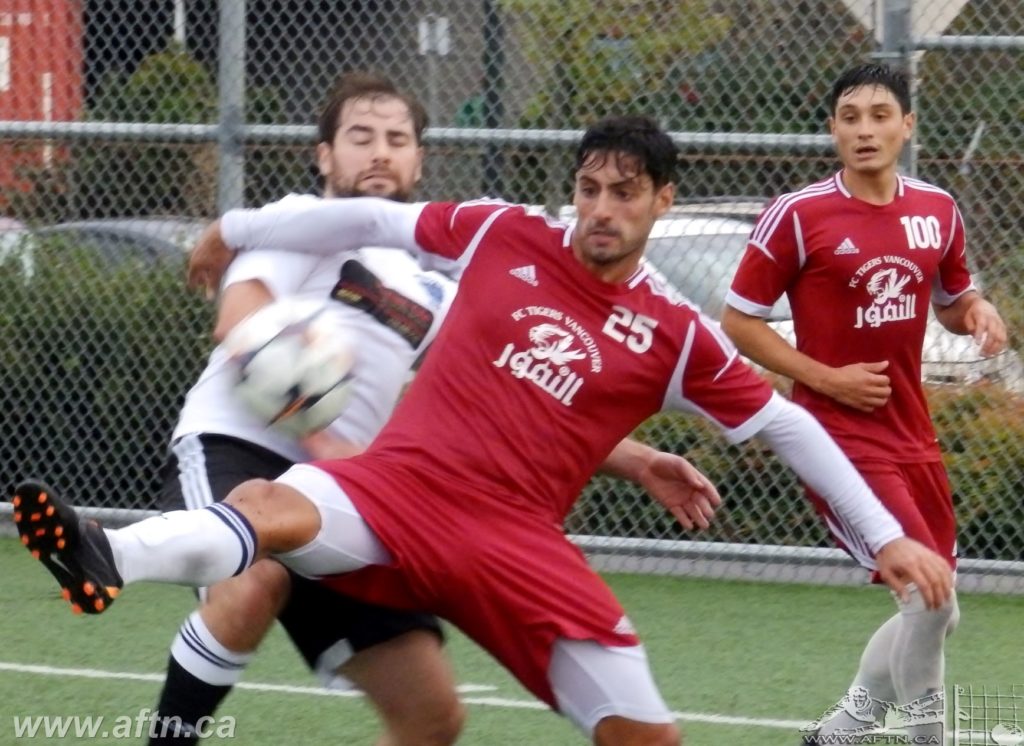 The match ended in an incredible 6-5 win for Rino’s Tigers in what was an entertaining match if you weren’t on either team’s coaching staff or defence!

The game went back and forth, and was a fiercely competitive affair with more cards dished out than goals from big Ruben the ref. Or at least it felt like that. We actually started to lose count. Everything in the first half seemed to end in a card, and ultimately that probably cost the Fury as they made changes at half time to ensure they finished the game 11 v 11. The players they took off were subsequently missed.

The Tigers jumped out to a super quick 2-0 lead in the opening minutes but they were pegged back by a Fury side that took over the game and hit four unanswered goals to take a 4-2 lead. That was reduced to a one goal advantage just before half time when Whitecaps Residency alumni Carlos Marquez slotted home from the spot, one of two goals he hit in the match.

It was a different story in the second half as the Fury struggled to get much attack going as the Tigers ran rampant, hitting three unanswered goals to take a 6-4 lead. Fury pulled one back with the last kick off the game from a fantastic free kick, but there was no time for any more action, which was a shame as we could have watched another hour of that!

Fury’s Dylan Dailly now leads the Division 1 scoring charts on five goals, after his hat-trick in the match.

We were enjoying the action too much to try and capture most of the goals on camera, but we caught some, along with a few chances, and compiled them in the crappily shot video below!

The win sees the Tigers out in front at the top of the table on nine points from their four matches, two clear of Binger’s Army and CCB Guildford, who drew 1-1 at NVFC Norvan Lions on Sunday.

At the other end of the table, Metropolitan remain rooted at the bottom on no points after their fourth straight loss, this time a 4-1 defeat at home to GN Sporting Club.

In Division 2A, Sarajevo lead the way on nine points after their 1-0 win over NK Hrvat on Sunday, one point ahead of the only remaining unbeaten team in that pool, Sea to Sky FC, who saw off PCOV Europa on Saturday.

We had half an eye on the Harps v Meraloma Division 2B game that was taking place on the other pitch at Trillium at the same time as the Rino’s derby. 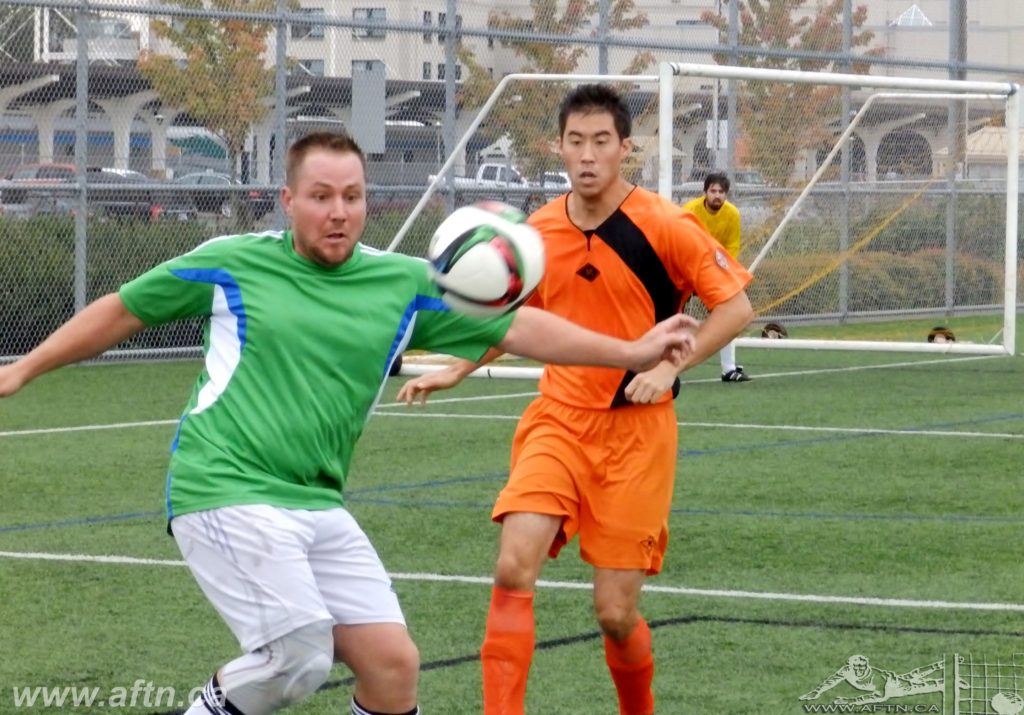 Meraloma jumped out to an early lead before Harps pulled one back later in the first half. Despite both teams having some good chances, and Meraloma having a first half headed goal called back for presumably a push, it ended 1-1. That was enough to keep Harps out on top in 2B, with the only remaining unbeaten record in that pool.

There’s three unbeaten teams left in Division 3 after week four, each of them leading a pool.

America FC hold a three point lead at the top of 3A following their 5-0 thumping of West Coast Saints at Burnaby Lake on Saturday afternoon. Cliff Senior Cobra lead 3B after a narrow 2-1 victory over PCOV Benfica on the next game on the same pitch. Despite the close scoreline, the Cobras have a +20 goal difference after four games.

Although that is nothing compared to Coquitlam Metro Ford Lupi who lead 3C with a goal difference of +23, and only two goals conceded. Those two goals came in Friday night’s 6-2 win over Strathcona United.

Division 3 for goals galore then.

If you fancy taking in any of the Week 5 VMSL action this Thanksgiving long weekend, you can find the schedule HERE.