It was a great weekend for Burnaby based teams in this year’s Provincial B Cup (Keith Millar Cup) quarter-finals, with three sides making it through to the semi-finals.

The semi-finals will see two VMSL v BMSA battles, with both games taking place at the Burnaby Lake Sports Complex.

The B Cup quarter final action got underway on Saturday afternoon, with Burnaby based VMSL side Campo Atletico hosting RASA champs AC Richmond. It was expected to be the match of the round, and although it might not have hit the levels expected, it was an entertaining affair, with Campo eventually running out 4-1 winners after extra time.

Campo came out strong and had Richmond on the back foot from the start, in a complete reversal to the RASA champion’s first round win over South Burnaby Fighting Irish.

They had several chances to go in to the break with a comfortable lead, but ended up with only one goal to show for it. That came midway through the half when Maurio Santos knocked on a long ball, outpaced the defenders and slotted home. 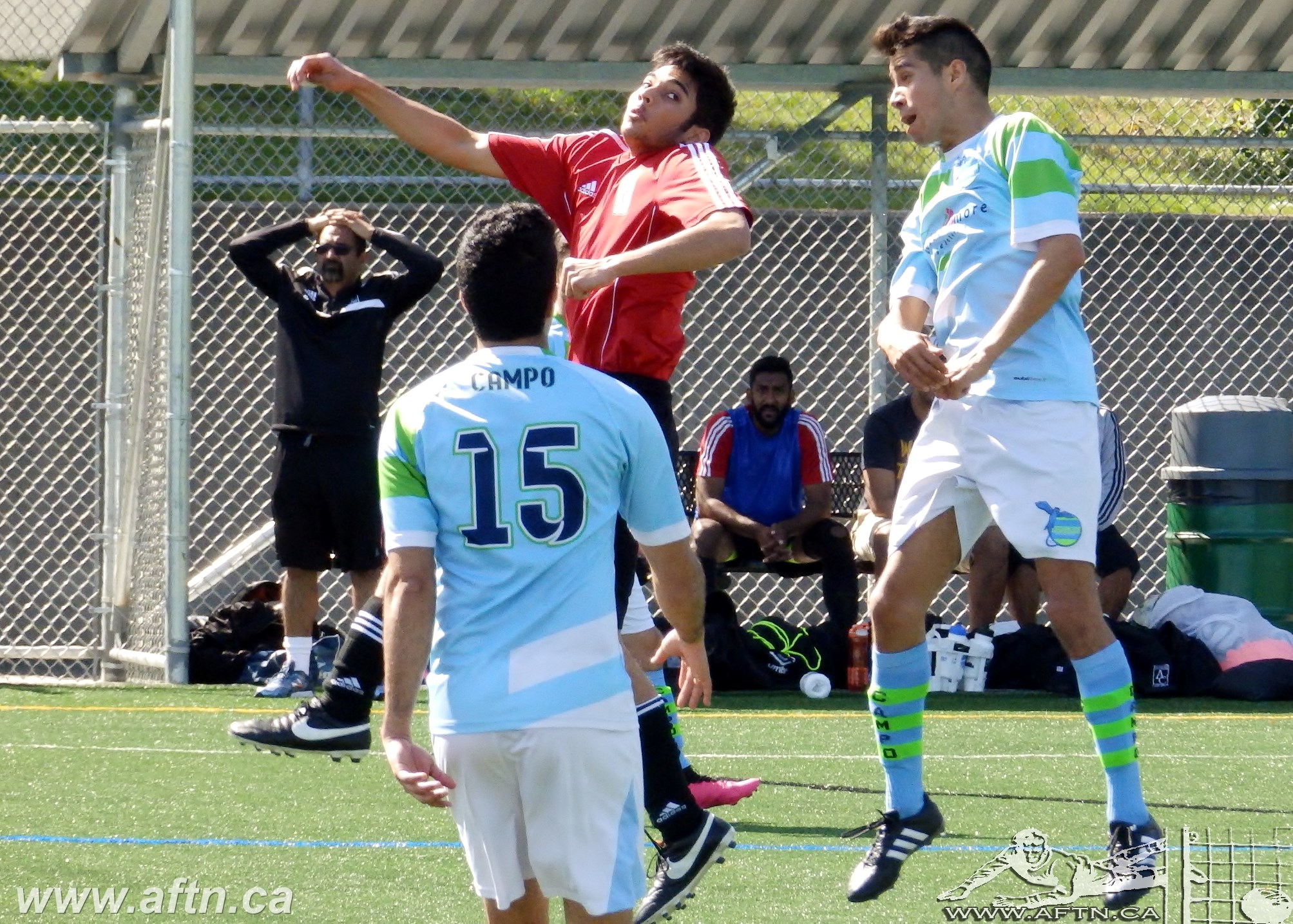 Campo had chances to double their lead but couldn’t convert, hitting the post just before the hour mark, but the home side were being forced to play on the counter, as Richmond dominated the possession.

The RASA champs were doing little with the ball to threaten the Campo goal, but they got themselves back into the tie in the 79th minute when Marcus Ribi played the ball inside to Daniel Neufeld, whose 14 yard shot nestled in the bottom left corner of the net.

Both sides had chances to win it in normal time, but extra time beckoned and Campo took control of the match in the extra period. And they did so with no available subs and having to go down to ten men for a five minute spell due to injury.

A Campo goal just five minutes into the extra time period forced Richmond to chase the game, leaving themselves short at the back. The VMSL side punished them with further goals in the 111th and 118th minutes to secure a 4-1 victory and a spot in the final four.

You can see all of the goals from the match, and a couple of the other chances, below (it didn’t seem that windy at the time!):

You can see some photos from the game HERE or in our Flickr slideshow:

Campo will now host this year’s surprise package, BMSA Rudolph Cup winners, Impero Calcio, who continued their good run of recent form with a 4-2 win over FVSL side PMO Titans on Sunday.

That was one of three quarter-final matches on Sunday, with goals aplenty.

Rino’s got off and running early when a long ball played in Kyle Reed, who bore down on goal before firing past the Snipers’ keeper from 18 yards out in the 7th minute.

Six minutes later and it was 2-0 to the Fury after a corner came to Brent Hanson at the back post and he directed it past the Snipers defender on the line to double Rino’s lead.

The game looked over as a contest in the 31st minute when Rino’s made it 3-0 from another corner. Once again, it should have been defended better by Snipers, as Cameron Gibson rose to head the ball home past the keeper and another defender on the post.

Snipers got themselves back into the game four minutes after the restart, when Rino’s keeper Uluc Birol was unable to keep hold of the ball and it fell to Max Walker, who hit home to make it 3-1.

Rino’s had a few chances which whizzed just wide or were hit over, and Snipers had a couple of shots saved by Birol, but the Fury held on fairly comfortably in the end to advance.

We managed to capture all three of Rino’s goals on video:

Rino’s Fury will now travel to Burnaby for their semi-final match up with Mundiavocat. The BMSA champs won through on penalties after their game with VMSL side Vancouver Strikers finished 2-2 after extra time.

The Strikers took the lead in first half stoppage time and looked home and dry when they added a second around the hour mark. Mundiavocat pulled one back from a quick breakaway with 15 minutes to go and they levelled things up with a penalty seven minutes from time.

The game headed into an extra 30 and Mundiavocat did well to take the game to penalties after going down a man.

The Strikers stepped up and scored the first penalty, with the home side quickly levelling things up. The Vancouver team then saw their next two penalties saved, with Mundiavocat converting theirs. Strikers needed to score their fourth spot kick to keep their hopes alive, but crashed their shot off the post and the Burnaby champions advanced to the semi-finals.

Both semi-finals will take place at Burnaby Lake Sports Complex. Campo Atletico v Impero Calcio will kick off at 11am on Saturday morning, with Mundiavocat taking on Rino’s Fury at 12.30pm on Sunday.