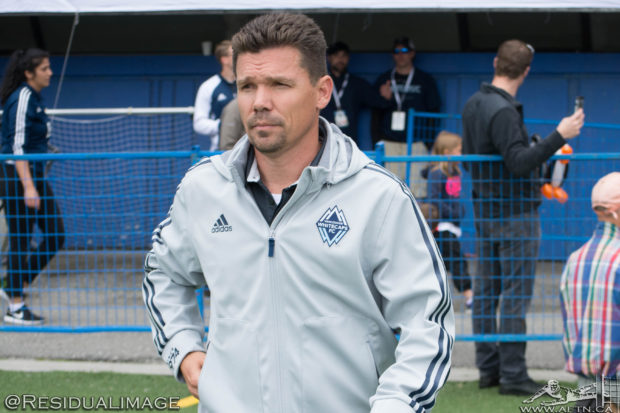 WFC2 finally return home on Sunday after a tough and testing four game road trip that saw them bring home just four of the 12 points on the table, but that was still good enough to keep them at the top of the Western Conference standings.

Vancouver have been away on their travels since the 1-0 win over Portland on June 19th. It’s been a mixed road trip for the young ‘Caps, one which has seen them play in some extreme heat and humidity, and have to turn to some players from the U16 team due to a heavily depleted USL squad.

A 1-1 draw at OKC Energy was followed up with an excellent late 2-1 win at Real Monarchs SLC a week later. Two excellent results before having to travel to Texas to play a couple of games in trying conditions.

A 4-0 thumping in Texas to Rio Grande Valley Toros, saw head coach Alan Koch forced to play a very young side, with players away with both the MLS and Residency U18 teams, along with some missing through injury. Brett Levis’ first half sending off, with the team already two goals down, added to what was already a miserable Wednesday night.

Things weren’t to get much better four days later when they travelled to San Antonio and came away with a 2-0 loss. Kyle Greig missed a first half penalty before the ‘Caps fell behind in the second half to a San Antonio penalty and then a killer late second.

“[The last two games were] very, very difficult,” Koch told AFTN. “To go down and play in the heat, it’s not an excuse, but we’re obviously not used to playing in that type of heat. The travel to get all the way down to Rio Grande is not easy, and I think it showed. We were very flat to start the game off, put ourselves in a hole and weren’t able to dig ourselves out of it. Then going to San Antonio, who are now on a bit of a roll, and they’re a good team too.

“So a very, very difficult road trip from that perspective and those two games. I was happy with how the games before that went on the road. To get four out of six points, we were happy, but we’re excited to be back home now looking forward to hopefully playing a good game on Sunday.”

It’s going to be a brief pit stop at Thunderbird Stadium before the young ‘Caps head out for two more games on the road and it’s going to be another tough test against a fourth placed Sacramento Republic side that is sitting just three points back of Vancouver at the top of the Western Conference right now.

The 2014 USL champions have had one of the best defensive records in the league these past two seasons, but they head to Vancouver winless in three, with two defeats in that run. Uncharacteristically they’ve conceded three goals in two of their last three matches, and seven in total.

The first meeting between the two sides this season came at Thunderbird Stadium in April, with neither side able to find the net in a tight 0-0 draw. Koch is expecting much of the same in Sunday’s match up and knows his side will need to be at their best to keep their place at the top of West.

“I would anticipate it will be tight,” Koch told us. “They’re very good defensively. We’ve been defensively at times during the season. We’ve got to find some sort of consistency. That’s an important part of setting ourselves up for success on Sunday is to make sure we’re tight defensively.

“But we also know we can go forward and create goals all the time. So we’re hopefully going to get that sort of momentum being back at home, but they’ve added a few different players since we played them last time, so it’ll be a little bit different than then, but it’ll be a big challenge.”

We’re expecting a fairly MLS heavy line-up from WFC2 for this one, and with eight of the team’s final 12 matches being at home, securing as close to maximum points as possible from them should set Vancouver up nicely for an extremely strong playoff position in the West.

Aside from the boost from finally being back at home, there is likely to be an extra spring in the step of a number of the WFC2 players following Tuesday night’s friendly with Crystal Palace.

Sem de Wit, Daniel Haber, Brett Levis, and Kyle Greig all received call ups to the first team for the match and each of them acquitted themselves very well. Greig was denied the match winner by a great point blank save from Palace ‘keeper Julian Speroni in the closing minutes, and Levis in particular turned a lot of heads, providing the cross for that Greig header, along with grabbing the assist on Kendall Waston’s goal that tied things up at two apiece.

Have they been buzzing since they came back?

“I haven’t really analysed that much to be honest, but if I think about it, Brett’s been very, very good,” Koch told us. “He played very well in that game and he’s been great in training too. Daniel and Kyle will take a little bit of confidence from their ten minute cameos and they looked dangerous in their ten minutes.

“Sem’s just a young, confident player. I don’t think he changes anything from if he plays in USL or a first team game. There’s not much that changes in his game. He doesn’t really get fazed by much either.

“But I think collectively as a group, they should take a bit of confidence from being in that environment and acquitting themselves quite well. Hopefully they’ll come in on Sunday and play with confidence too.”

And talking of players acquitting themselves well, that’s just what three members of the ‘Caps U16 team did when they were given their opportunities in the last two USL matches.

Nicolas Apostol, Alan Camacho, and Joel Harrison all received academy call-ups for the matches at Rio Grande and San Antonio, and all three made their USL debuts. Centre back Harrison saw time off the bench in both matches, with Camacho coming on against Rio Grande and Apostol in San Antonio.

With Terran Campbell receiving an academy call-up last July, before signing an USL contract a month later, it’s an ideal way for the ‘Caps to see these top performing young players tested at the next level. Can we expect more of the same in the coming weeks?

“It’s a bit of a challenge right now because this is the offseason for the 16s and 18s,” Koch said. “We had a few guys come in for that trip just because of numbers. We didn’t have anybody else. I thought they came in and did quite well with the opportunity that they got.

“We’ll look at when they come back in in August to try and get as many guys into the training environment as possible. I think the more we get them into the USL, the closer we can get with them, the better assessment we get on them and then see who the guys are that should be getting USL contracts.”