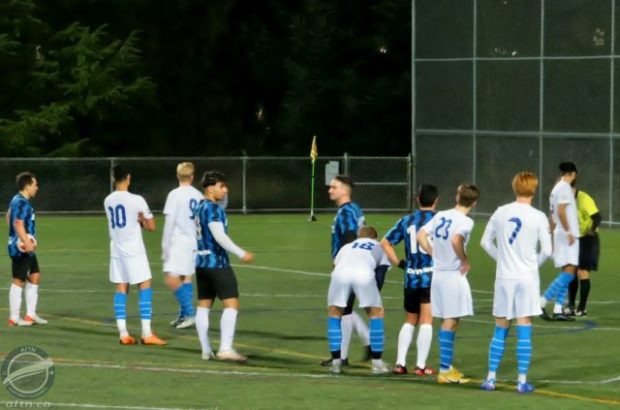 BB5 United CCB’s march to the Vancouver Metro Soccer League (VMSL) Premier Division title became a step closer to reality this past weekend as the Surrey side picked up three more points in another commanding performance, while their two closest challengers both dropped points and fell further behind the league leaders.

It was an entertaining and exciting week of VMSL action, with the six Premier games producing 18 goals between them, as the battle for Provincial Cup places started to get really interesting with just a few more weeks of the league season to go.

The league leaders were in action at Newton Athletic Park on Friday evening and they put in another dominating performance as a Caleb Clarke hat-trick and goals from Connor Glennon and Nic Morello gave BB5 a 5-0 victory over bottom placed MAFC Elite. Those goals took Clarke and Morello to 14 goals apiece on the season and saw the Surrey side take a five point lead at the top of the VMSL Premier standings with eight games left to play, and with having two games in hand on their nearest rival.

Rino’s VSC Coastal held on to second spot in the table but lost ground on the leaders after throwing away a two goal lead in a highly entertaining match at Burnaby Lake on Friday night with Inter EDC, going down 3-2 in the end in a fantastic advert for the league.

The match was an end to end affair from the start, but Coastal had the better of the early going and took the lead eight minutes in when Adam Staschuk was quick to pounce on a rebound in the six yard box to drill home the opening goal. Both teams exchanged more chances, but Coastal were still looking the more threatening team and they doubled their lead in the 19th minute.

Isaac Kyei was brought down in the box and Jake Starheim stepped up to tuck away the resultant spot kick, but Coastal’s lead was reduced back down to one just five minutes later when Inter got a penalty of their own after a handball in the box, which Alex Marrello made no mistake of dispatching.

Four minutes later and we were all tied up after after former Whitecaps academy prospect Massud Habibullah fired home the goal of the game, with a lovely low strike from the edge of the box.

Both teams created numerous chances in the remaining hour, and how there was only one more goal added to the tally is a mystery, but the winner came on a quick counter for Inter with eight minutes remaining, with a composed Andres Rojas’ coolly finishing into the far corner.

The loss was a big blow to Coastal’s fading title hopes, but put Inter right back in the thick of things as they battle for a top four spot and a guaranteed place in this year’s Provincial Cup. On the form they showed in this match, you have to think they will clinch one.

Inter were certainly one of the big winners this past weekend in terms of the standings, as were VUFC Hibernian, who moved up to third in the table to sit just one point behind Coastal now after a Bradley Richardson goal gave them a narrow 1-0 win over Burnaby Selects White Eagles at Burnaby Lake on Sunday evening.

Coquitlam Metro Ford Wolves dropped down to fourth in the standings after dropping two points in a battle with BCT Rovers Hurricanes at Newton Athletic Park on Friday night, and it was both teams’ tops scorers that found the back of the net in this one in a 1-1 draw.

The home side had the better of the opening chances and they got the breakthrough in the 27th minute when the league’s Golden Boot leader, Nick Soolsma, hit his 22nd of the season, firing home from the spot after a handball was called in the box.

The Hurricanes couldn’t put the game to bed though and they were punished for some sloppy defending in the 74th minute when they were dispossessed at the corner of their own box, allowing the ball to be played in across goal for Carlo Basso to sweep home his 12th of the season.

Both sides had their chances to win it in the closing minutes, but neither could find the breakthrough and a share of the points it was.

The other two games last weekend saw West Van draw 1-1 at home to SFC Pegasus at Ambleside on Friday night and Croatia SC ran out 2-1 winners over NVFC Norvan at Burnaby Lake on Sunday afternoon.

So after all of that action, here’s how the VMSL Premier standings look after Week 18 of the season: 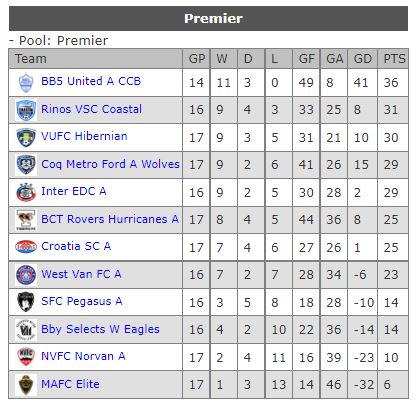 Here’s what’s on the slate over this weekend in the VMSL Premier: