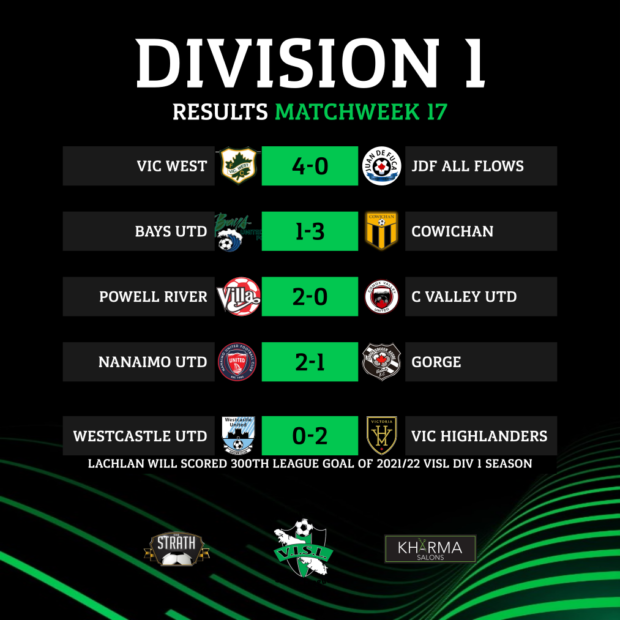 The top division of Island soccer did not disappoint on the weekend with several strange results – you can decide for yourself which fall into that category. Is definitely why you play the game instead of just awarding results to those that SHOULD win.

Sp here is the snapshot of the weekend results in Division 1 of the Vancouver Island Soccer League (VISL).

Friday started out with a lopsided result at Finlayson as Vic West shutout Juan de Fuca Allflows 4-0 thanks to goals from Andres Algarin, Marcus Campanile, and a pair from Salem Almardy. Vic West keeper Daniel Young-Mercer secured the clean sheet for the Greens.

Friday also saw Cowichan come down the Malahat and surprise Bays Utd by dealing them a 3-1 loss. Colin Knight, James Henry, and Dan Citra were all on target for Cowichan, while the Bays loan goal was scored by Patrick Nelson.

Saturday started out with a bang as Powell River Villa defeated Comox Valley Utd 2-0 through goals from James Timothy and Griffin Leach. Keeping everything out of the Villa goal was Scott McKenzie.

A close match in Nanaimo on Saturday saw Nanaimo Utd slip by Gorge FC 2-1 after a brace from Colin Jacques. The marker for Gorge scored by Kaelan Cooke.

The night, and weekend, wrapped up at Starlight Stadium as Victoria Highlanders shutout Westcastle 2-0 thanks to goals from Lachlan Will and Godwin Babu. Earning the shutout for the Highlanders was keeper Aden Lauzon.

And those results meant some big changes in the standings. Leaders Lakehill had a bye week, but here are how the table looks after all of that action. 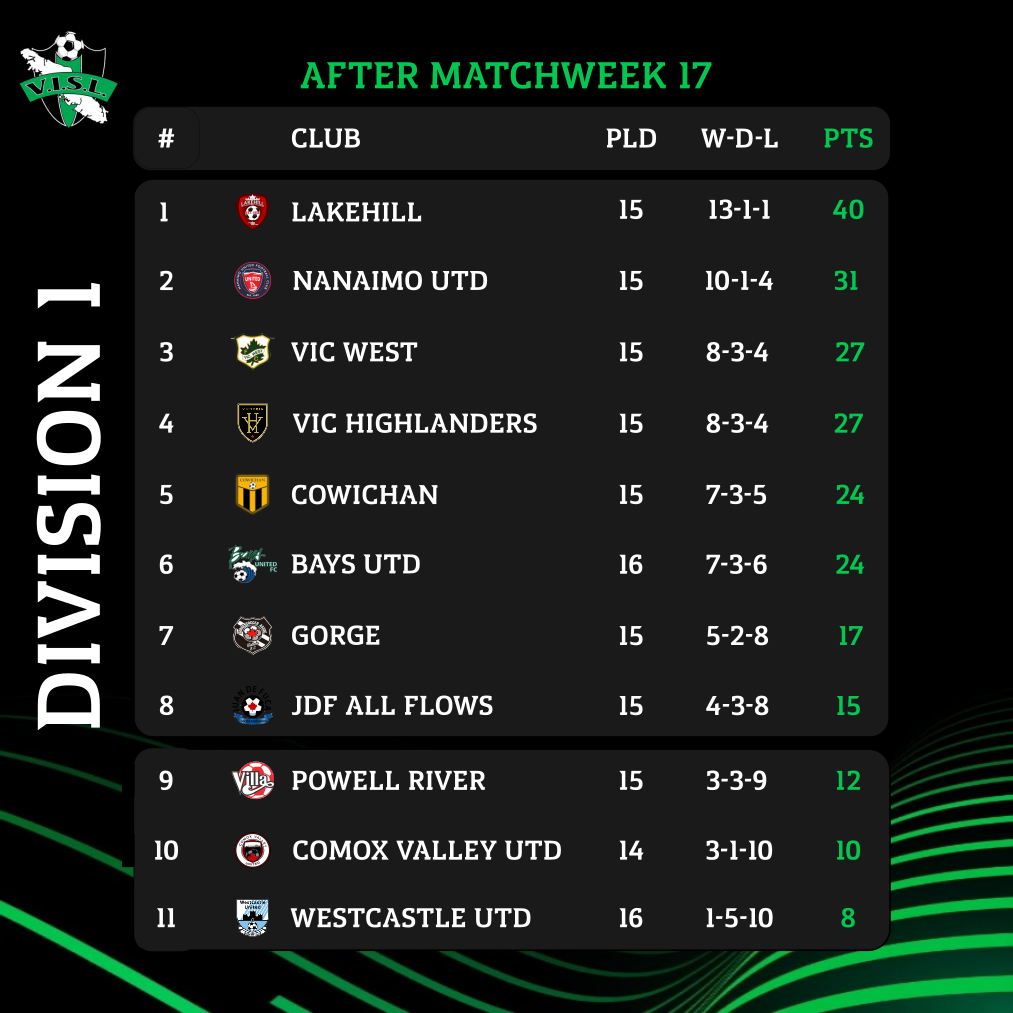 The surprise shift came mostly from the bottom half of the table as Nanaimo, Vic West, and the Highlanders did what they were “supposed” to do. The big Cowichan win allows them to leapfrog Bays and go into 5th spot.

Powell River’s win shifts some of the pressure on to Comox now as teams battling to get out of the relegation zone keeps getting interesting.

What we know for sure – one team from Division 1 will drop to Division 2. There could be another two teams to drop down – and that will be dictated by the top teams in Division 2 – and if they decide to promote, or exercise their potential option to stay in the second tier.

The next two weeks could spell out the fortunes for several clubs, some positive, some not so much.

The Golden Gloves leaderboard for clean sheets didn’t change too much as Hardeep Gahunia of Lakehill wasn’t in action but still leads the way on five for the season, two ahead of the chasing pack. The scoring race though got a little tighter this week as the current leader also had a week off.

Blair Sturrock of Lakehill still leads the way with Patrick Nelson nipping at his heels. 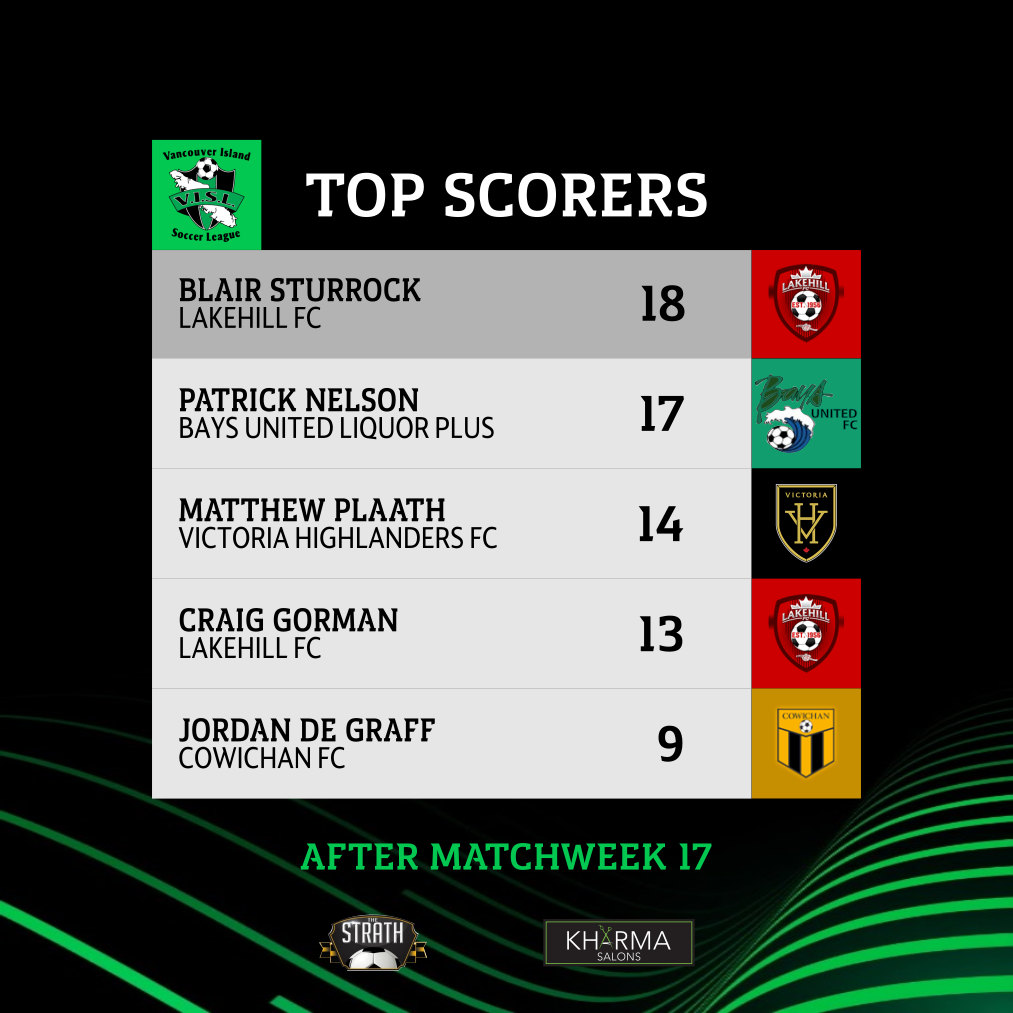 But that’s another week in the books, and another week closer to crowning a Garrison Cup winner – a trophy that has been competed for since 1904.

Matchweek 18 starts Friday night, and the Island’s top flight will take inspiration from the Canadian National Team into the weekend.

Friday starts out with a game at Sherman Road Turf as Cowichan FC host Vic West. Both teams are coming off victories last week and this will be a good test for both squads. A Vic West win will see them pull away from Cowichan, while the hosts would like the points to level up with the Greens.

Another game Central Island sees Nanaimo hosting Westcastle at Nanaimo District Secondary School. Westcastle will have their work cut out for them as they try to get out of the basement. Nanaimo are still clinging on to hopes of catching Lakehill, and should keep their dream alive come Saturday morning.

Saturday sees a match at Hampton Turf as Gorge FC host Powell River Villa. Villa are coming off a huge win over Comox and will look to add valuable points to their total to get out of the relegation zone. Gorge are coming off a tight loss to Nanaimo, but playing well. It will be a tough match for the visitors.

Saturday also has a game North Island as Comox Valley hosts Bays Utd at Vanier Turf. A huge game for Comox as they want to separate from Westcastle at the bottom. Bays will need the points to get back into the top four discussion. Should be a tough match.

Saturday wraps up with Juan de Fuca Allflows hosting the division leaders at Starlight Stadium. Nobody will forget the last time these 2 teams met and JDF had the Reds on the ropes, leading by three goals. Lakehill fought back and snatched the game from JDF in the end. This will be a tough match for JDF, but anything is possible.

Here’s the full slate of Division 1 matches coming up this weekend: 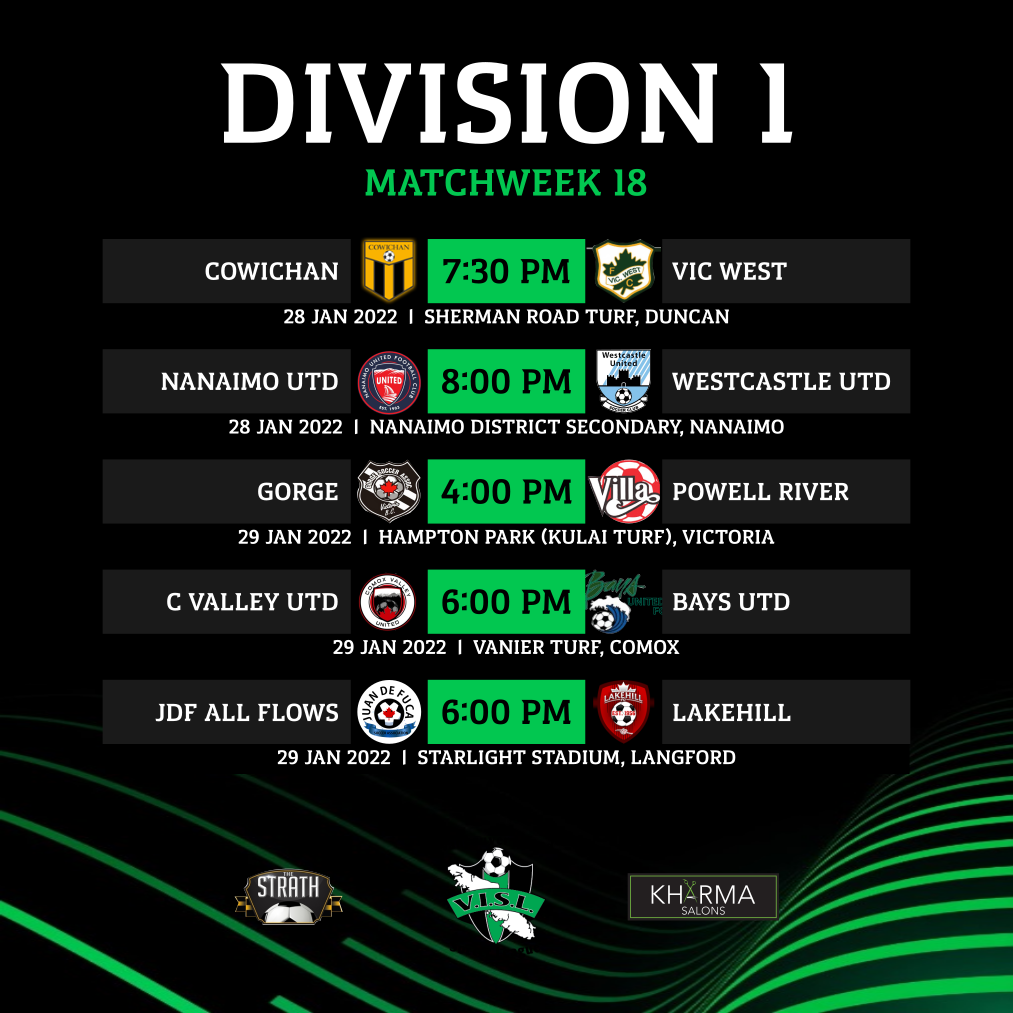