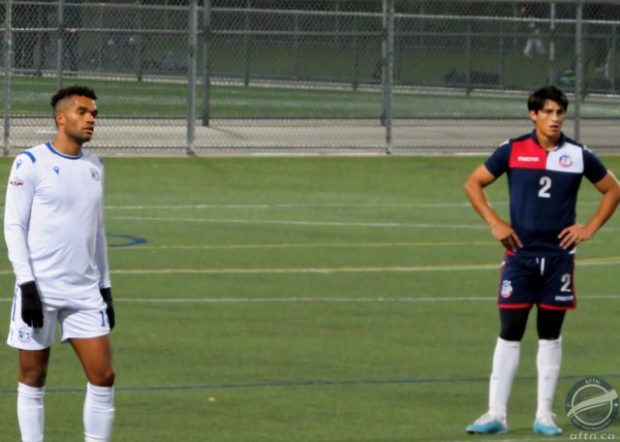 The first round group stage in the Vancouver Metro Soccer League’s William Azzi Premier Cohort Cup reached the halfway mark this past weekend, with three teams maintaining their 100% start to the new season after the first three matches, all of them with identical records.

BB5 United lead the way in Group A after a commanding 4-0 win over Club Inter EDC Burnaby at Burnaby Lake on Friday night, thanks to a Caleb Clarke hat-trick.

BB5 came out of the gates flying and were two up within the first three minutes. Clarke got his first of the night with less than a minute on the clock, pouncing on a loose ball in the box to fire home and he doubled the Surrey side’s lead two minutes later after some nice build up play.

You feared for a blowout but full credit to Inter, who knuckled down and came right back into the game producing several chances of their own, as BB5 looked to add to their own tally, which included a header off the bar.

BB5 had to settle for the two goal lead at the half but came out strong again to start the second, and Clarke got his hat-trick in the 49th minute when he tucked away a penalty.

Inter had their own chance to pull one back from the spot shortly after but Luke O’Shea came up with the big save and BB5 made it four with 15 minutes to go when Othmane Kabbadj volleyed home a first timer.

That victory made it nine points out of nine for BB5, with a plus 10 goal difference, as they look to lock down a semi-final spot next month.

You can see all of the goals and some other highlights from the match in our video below:

Westside sit second in Group A, three points behind BB5, following their 5-1 shellacking of Rino’s VSC at Point Grey on Saturday afternoon. You can see two of their goals on the club’s Instagram account.

This week, Westside take on Inter at Burnaby Lake on Friday night (kick off 8.10pm), while BB5 head to Vancouver on Saturday afternoon to take on Rino’s at Trillium (4.05pm kick off).

MAFC Tigers made it three from three themselves in Group B with a 4-1 win over SFC Pegasus at Burnaby Lake on Sunday night. Goalless at the half, Joe Zupo fired the Tigers ahead in the 50th minute after a sustained period of pressure to start the second half, only for Pegasus to tie things back up again a minute later.

The Tigers went ahead again in the 54th minute and didn’t look back after that, adding to their tally three minutes later when Farivar Torabi finished off an inch perfect Erik Edwardson cross. Connor MacMillan rounded off the scoring in the final minute, firing home after Torabi looked to have been fouled in the box.

Another strong performance from the Tigers and you can see the match in full on the video below:

MAFC have a five point lead at the top of Group B over Croatia SC, who drew 1-1 with NVFC Norvan at the Fen Burdett Mahon Stadium on Saturday afternoon.

Pegasus host Croatia at Newton on Friday night (kick off 8.45pm), while MAFC Tigers travel to Norvan on Saturday afternoon (kick off 4.30pm) in this week’s Group B action. The latter of which will be streamed live on YouTube.

VUFC Hibernian lead the way at the top of Group C following a 4-1 victory against West Van FC at Ambleside on Friday night. Victory Shumbusho hit a brace, with Mackenzie Cole and Chris Lee also on the scoresheet for the UBC boys.

Hibernian now have a five point lead over the Amblesiders, with BCT Rovers Hurricanes sitting third after they secured their first win of the season, a 3-1 victory over Burnaby Selects White Eagles at Newton on Friday night.

All of that leaves the VMSL Premier Cohort Cup standings as follows: 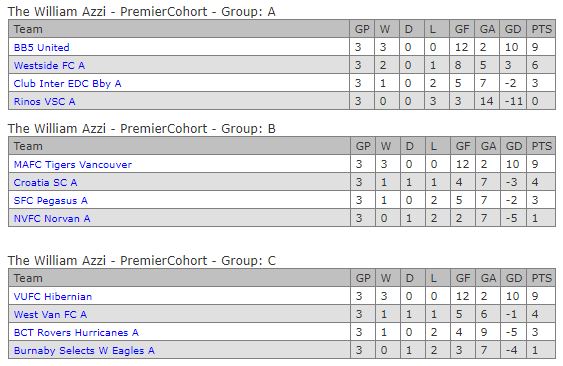 The first round group games will be played over the next three weeks before the semi-finals are scheduled to take place on the weekend of November 20 to 22nd, and the final the following weekend. All subject to change, Covid restrictions, etc.