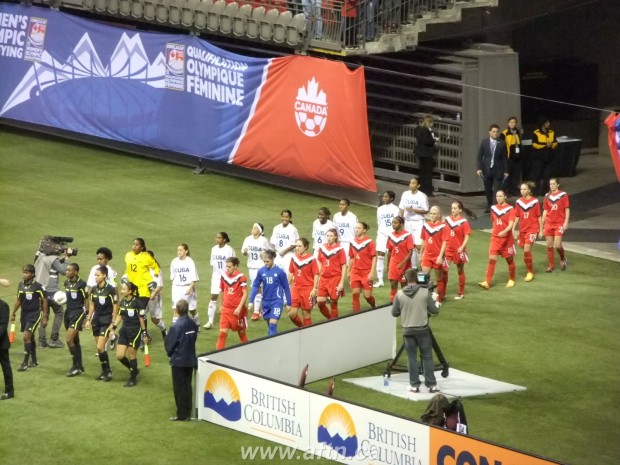 The Canadian Women moved to six points in their group, level with Costa Rica, after a comfortable and comprehensive win over Cuba at BC Place this evening in the Olympic qualifiers.

Whatever Canada did tonight, it was always going to be overshadowed by America’s 14-0 trashing of the Dominican Republic yesterday.

Despite Cuba being ranked eight places below the Dominicans in the FIFA rankings (in 96th place), this game was never going to see anywhere near that kind of annihilation. Canada don’t appear to be built to be a team capable of doing that, and that’s no bad thing.

In many ways, last night was a freak result. It’s not happened in Olympic qualifying before (8-0 was the previous record) and that’s also no bad thing that it happened, as it might now make CONCACAF review how they deal with future tournaments, to hopefully avoid other such farces.

It’s nice to see your team win by a confidence building barrel-load, but 1-0 wins do the same job at the end of the day.

Some games end up pedestrian, and I think tonight’s falls a bit into that category, especially in the first half. Canada know they need to be professional. They have a job to do, they have points to bag, but most of all, they have injuries to avoid.

They did all three this evening. 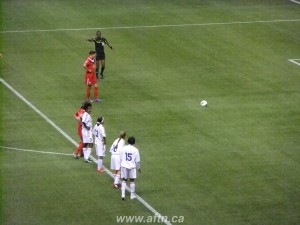 Christine Sinclair opened Canada’s account on the night with a 17th minute penalty, after Southsiders’ fave Kaylyn Kyle was sent sprawling in the box.

Her fifth goal of the tournament, and second penalty, was her 125th for Canada. An amazing feat and fitting that it was done in a city that has just celebrated it’s 125th birthday. She’s like a train.

Sinclair turned playmaker seven minutes later, sending in an inch perfect cross onto the head of Melissa Tancredi, who bulleted the ball past Martinez in the Cuba goal.

Chelsea Buckland hit the post for Canada, as the hosts played some nice passing moves, without really delivering the final killer ball for the rest of the half.

Two up at the break the second half wasn’t exactly full of excitement for the 12,417 in attendance, a record for a CONCACAF Women’s tournament match in Canada by nearly 5,000.

Tancredi went inches wide nine minutes into the half, following a nice build up, and Sophie Schmidt had a free kick tipped over late on, but that was pretty much it for the second period.

John Herdman and the girls would have liked a couple more. Their play deserved it, but they seldom got out of first gear, because frankly, they didn’t have to.

Herdman stayed classy throughout. I watched him when the goals went in and there was no over the top celebrations. He could teach the Americans a lot. The more I see the guy, the more I like him and his approach.

Kaylyn Kyle was my ‘Woman of the Match’. She ran non stop, had some great pace and touches and deserved a goal for all her hard work. She came close. 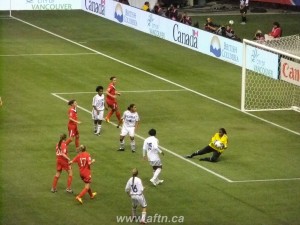 The win saw Canada clinch a semi final berth. Monday’s game against Costa Rica will decide whether they will finish first or second, but it should be a pretty foregone conclusion.

The teal and aqua sections of BC place were opened tonight to allow the extra fans in. The competition is clearly growing and, ever so slowly, capturing the imagination of the Vancouver public. I could do without the screaming teenage girls though. Ear piercing!

With Friday being the crunch day for all four remaining teams, and Olympic qualification on the line, the new CONCACAF Olympic attendance record is going to be broken again, and by some margin.

We can only hope that that will help the Canadians over the line. If they are to get there, then they need to produce a little more than what was on display tonight.