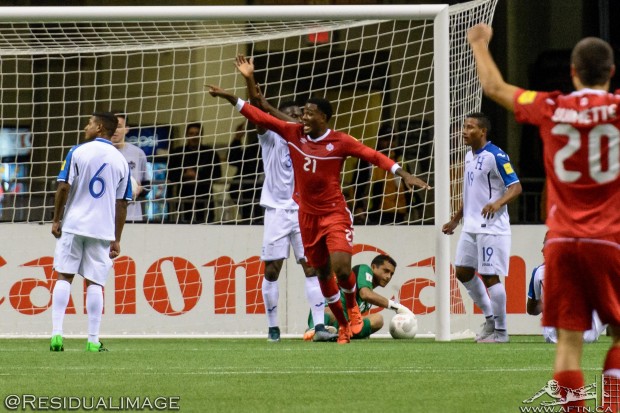 Eleven years after losing 3-1 to Costa Rica at Swangard Stadium, the Canadian National Team returned to Vancouver in front of 20,000 plus fans and defeated Honduras 1-0.

The difference in the match was a first half goal initially given to Will Johnson and then awarded to Cyle Larin after the match while Milan Borjan collected the clean sheet. All hail Cyle Larin’s ass!

Canada carried the majority of play through the first half but were unable to create any clear chances until after the half hour mark when after a nice combo by Junior Hoilett and Atiba Hutchinson, Julian de Guzman took a shot from distance that forced a big save from Noel Valladares.

A few minutes later Canada would capitalise on their play, with Larin scoring the opener and his fourth for the national team.

After completing a give and go with Hutchinson, Hoilett delivered a cross from the left sideline to the far post where Will Johnson headed it towards the net.
On its way to the goal the ball came into contact with Larin, who had tumbled with the Honduran defender heading to the net, before going over the line giving the Canadians a much needed lead going into the half.

The home side pressed for another goal as the second half started and came very close after the hour mark when Will Johnson’s free kick attempt from 35 yards out hit the right post.

There were chances for Honduras to earn the draw late in the match as Milan Borjan came up big to stop a shot from distance by Mario Martinez.

Another shot from distance came with less than ten minutes left. This time Borjan spilled, causing a scare, before the keeper was able to gather it.

Ultimately Canada was able to finish the match with the victory and an important three points to kick off this round of 2018 World Cup Qualifying. There will be little time for the players and coaches to enjoy this win as they will travel to El Salvador for their next match on Tuesday.

With Benito Floro and all of the Canadian players raving about the atmosphere at BC Place on Friday night, and buoyed by the win, fans in Vancouver won’t have to wait another 11 years for the national team to return. Expect them back in March to take on Mexico.