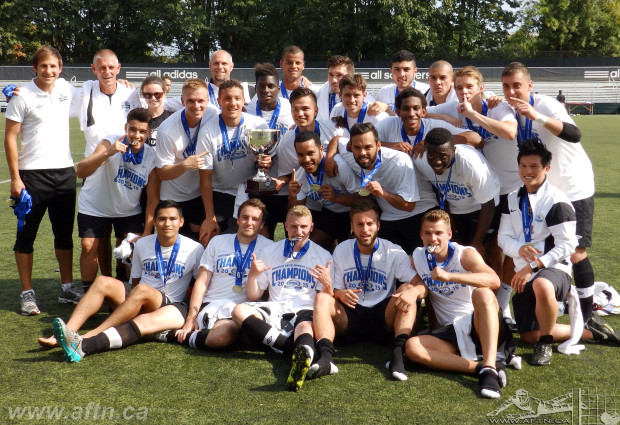 It wouldn’t be Canadian soccer if things weren’t done the hard way!

Ontario side K-W United FC became the third Canadian club to win the USL PDL Championship in a dramatic seven-goal thriller at Starfire Stadium in Tukwila, Washington on Sunday afternoon.

The Kitchener-Waterloo club were up 3-0 and coasting at half time before New York Red Bulls U23s staged a storming comeback. The New Yorkers missed a crucial late penalty, which proved to be a deciding factor, as K-W United came through 4-3 winners in the end to lift their first ever PDL Championship.

K-W United now add their name to record books alongside fellow Canadian champions Thunder Bay Chill, who lifted the trophy in 2008, and FC London who won it in 2012.

“You rarely see a final like this,” was K-W United coach Chris Pozniak’s take after the dramatic match. Both sides played some really entertaining and attacking football in sweltering hot conditions and the game was a credit to the players of both teams.

The Canadians came out all guns blazing and took the lead just six minutes in when Ben Polk fired home from six yards out after getting on the end of a free kick. It sent K-W on their way but it also send their leading scorer out of the match with a damaged ankle.

K-W goalkeeper Nathan Ingham was named the ‘Man of the Match’ and he came up with one of the game-defining moments when he tipped a Brian White header over from close range in the 20th minute, keeping the Canadians lead intact.

That lead was doubled when Joel Perez sidefooted home Ridge Robinson’s cutback from almost the same position as Polk’s opener.

K-W were in complete control now and the man who came on for Polk, Jarek Whiteman-Asiamah, grabbed a third in first half stoppage time when he ran in on goal and slotted home under New York keeper Joseph Ohaus.

A three goal half-time lead must have been more than K-W would have dreamed off coming in to the match, but their gameplan certainly seemed to be to attack the Red Bulls from the off.

“The plan was to high press them,” Pozniak told AFTN after the game. “We did that effectively in the first half. It backfired a little bit in the end because I think we lost our legs. They showed tremendous spirit in the second half to get back into the game.”

And New York certainly did that.

If the first half was a tale of Canadian dominance, the second was of a stirring Red Bulls comeback from a side that never gave up hope and looked like they could do the unthinkable and grab the unlikeliest of wins in the closing moments.

New York pulled one back seven minutes into the second half when Scott Thomsen curled a 25 yard free kick around the wall and past the diving Ingham into the bottom left corner of the K-W net.

Was the comeback on? It didn’t look like it when K-W restored their three goal lead in the 62nd after Juuso Pasanen buried Julian Buescher’s cutback from eight yards out.

New York cut the deficit back to two, six minutes later, when Thomsen’s dangerous ball across goal found Rhys Williams at the back post and he fired home.

But the drama was only just getting underway.

The Red Bulls sensed a way back and K-W were feeling the effects of their early exertions in the sapping heat.

New York were given the chance to cut United’s lead to one in the 79th minute after they were awarded a penalty but Thomsen’s kick was saved low by Ingham and the stopper was up quick to collect the rebound.

It looked like the Red Bulls chance at getting back into the game had gone but they kept fighting and did grab a third four minutes later when Steven Echevarria sent a dipping free kick to the back post and White headed home.

That set up a grandstand finish, but the K-W defence regrouped and held tight, killing time with breaks forward.

As the game entered stoppage time, New York were reduced to ten men when Zach Knudson got a red card for a second booking, taking valuable time off the clock in the process.

That was to thankfully be the last real drama of the game and K-W United held on in the six minutes of stoppage time to claim the first ever Championship for the Ontario side.

It was also the first managerial success for former Whitecap and TFC player Chris Pozniak. The defender took over K-W United from another ex-Cap, Stuart Neely, at the start of the year, building on the success from last year when the club made the Conference final.

Watching from the sidelines is still a new experience for Pozniak, so how was he feeling after all that second half drama?

“Relieved,” Pozniak told us with a smile. “I almost had a heart attack there! Yeah, that’s really the only feeling right now. Relief. I’m excited. I’ve learned so much this year. Both from the support staff and the players. Fantastic learning curve for me.”

It was certainly a nerve wracking end to the game for K-W. You could feel the tension as New York were clearly in the ascendency. What was going through his mind when the Red Bulls kept coming and coming?

“I just kept thinking try and keep the guys calm,” Pozniak said. “Usually when things go wrong, everything that can go wrong does. You’re always thinking the worst but always trying to stay in a positive frame of mind.”

Pozniak’s playing career took him to five countries, saw him play in MLS with Toronto and Chivas USA, and play internationally for Canada from youth to senior level, including appearing at a youth World Cup. So on a personal level, where does this triumph feature in his career achievements?

“This is huge,” Pozniak admitted. “This is a wholly different career. I haven’t had the opportunity to be part of many winning teams. Anytime you get the chance to win something, it’s huge.”

It’s always great to see a young Canadian coach grab success and it will be interesting to follow Pozniak’s future in the game, along with a number of his players.

For now, we extend our congratulations to everyone at K-W United on a fantastic Championship-winning season.

Here’s our makeshift “The Story In Pictures” from the Championship game (Not as good as Tom’s Whitecaps ones for us, but I was just shooting from the stand and trying to avoid dying in the heat!). There’s also a full Flickr slideshow at the end. Enjoy! 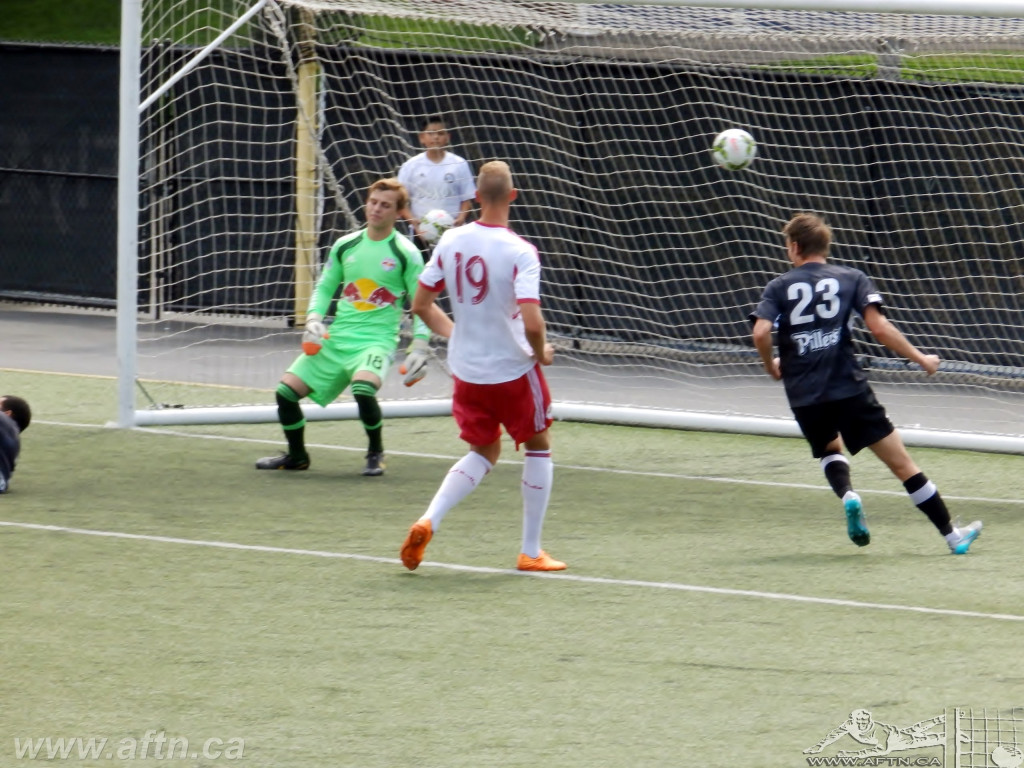 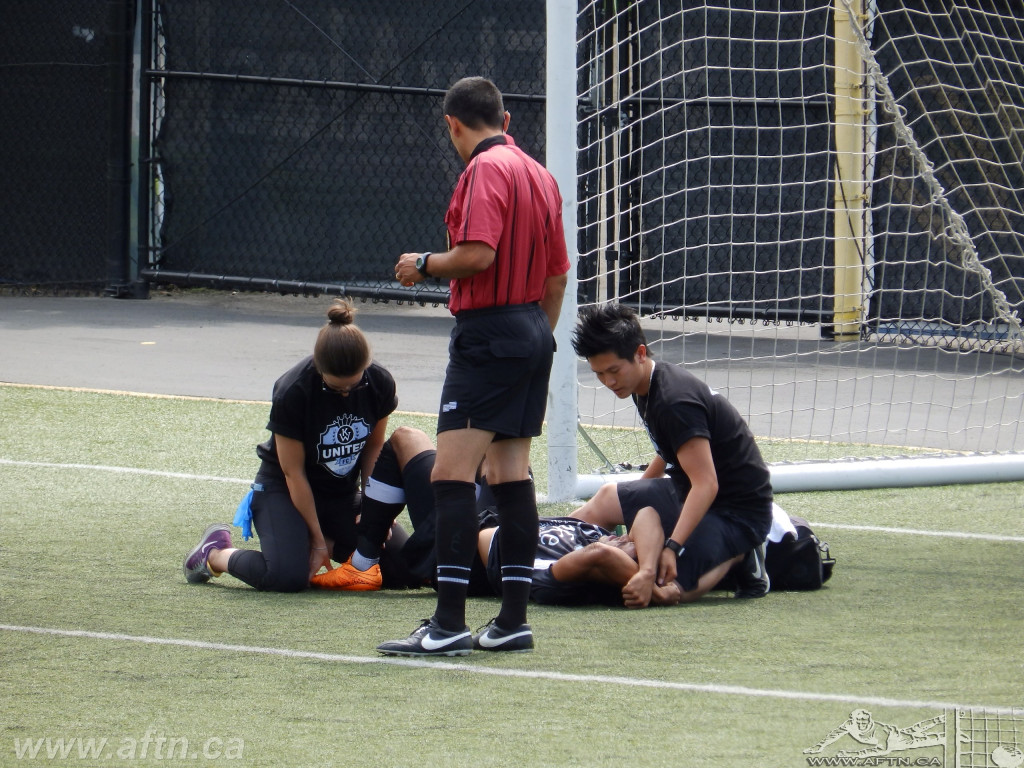 But the goal comes at a price 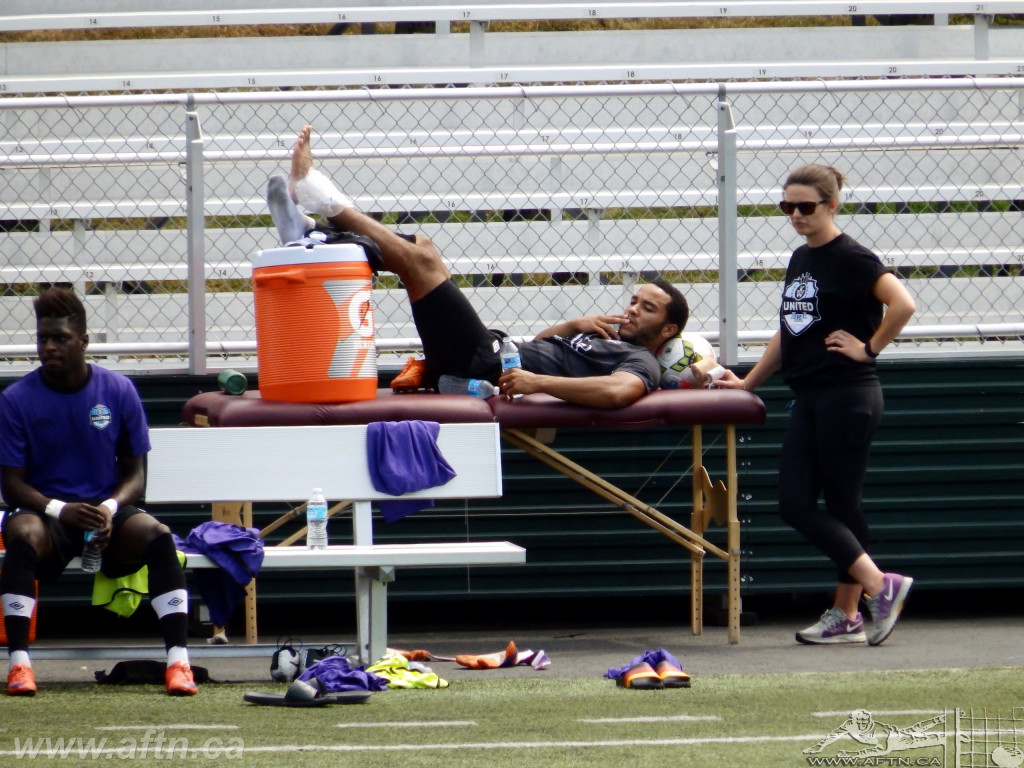 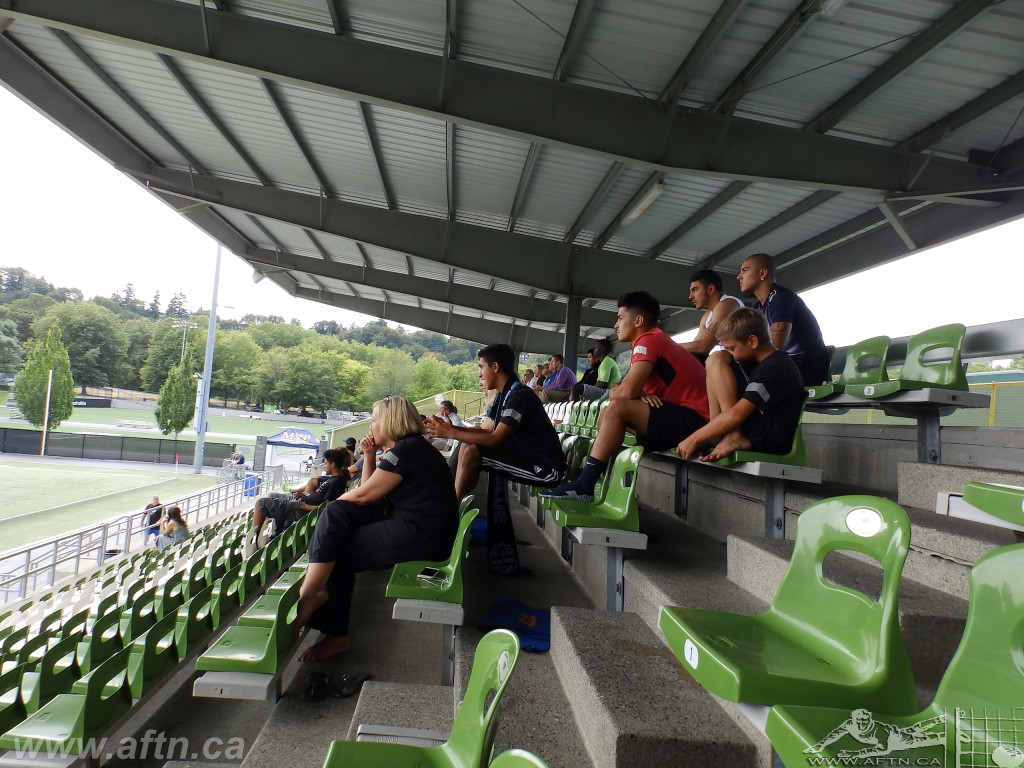 The travelling black and blue army 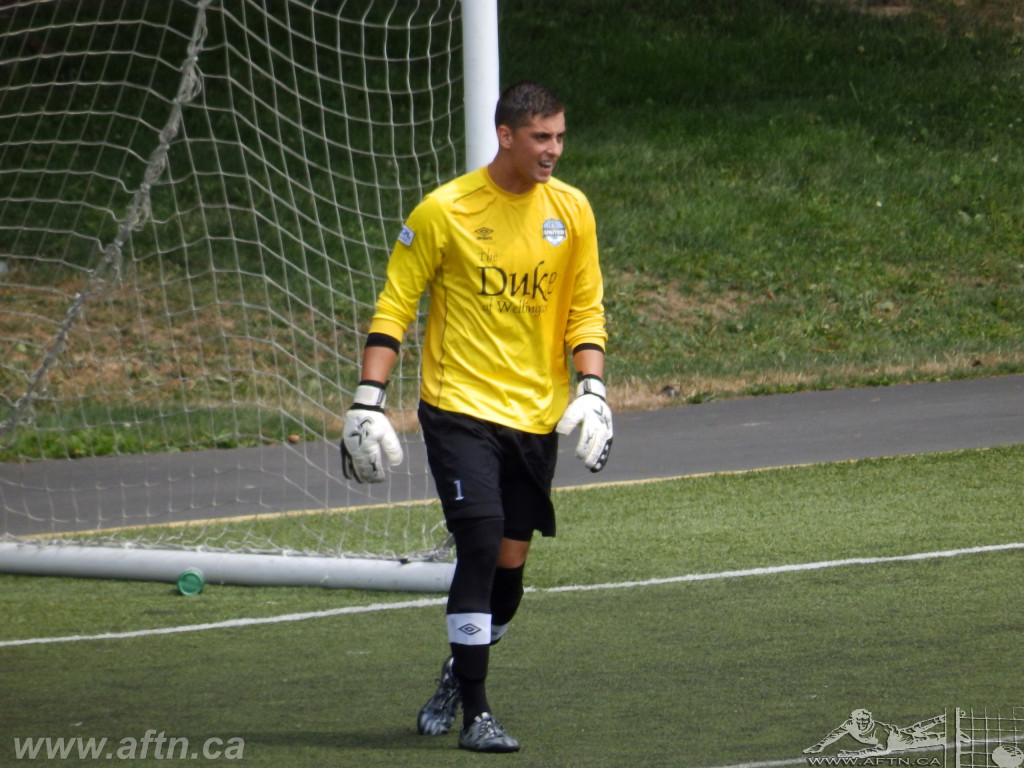 Man of the Match, K-W goalkeeper Nathan Ingham, came up with a huge 20th minute save off Brian White to keep his team’s lead 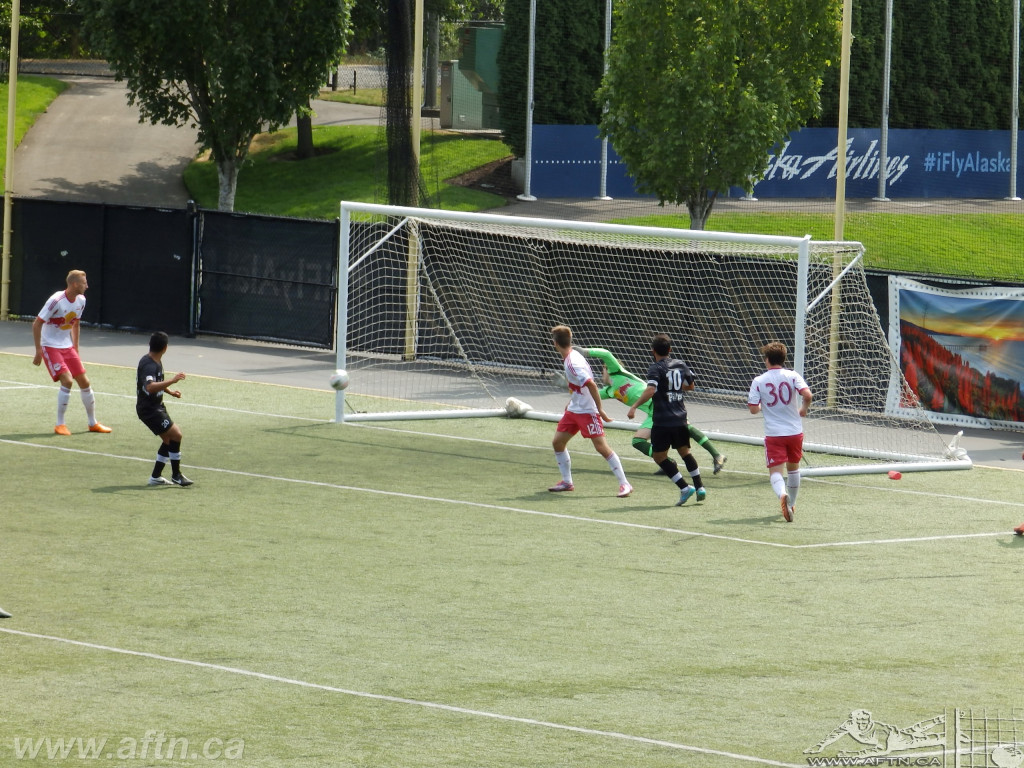 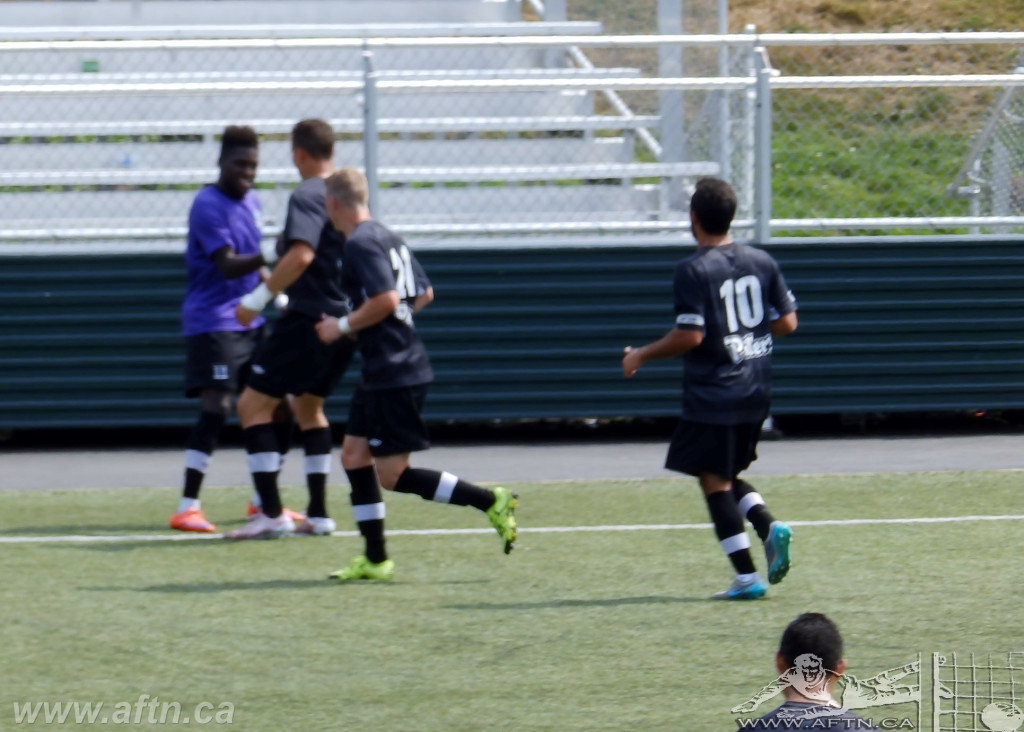 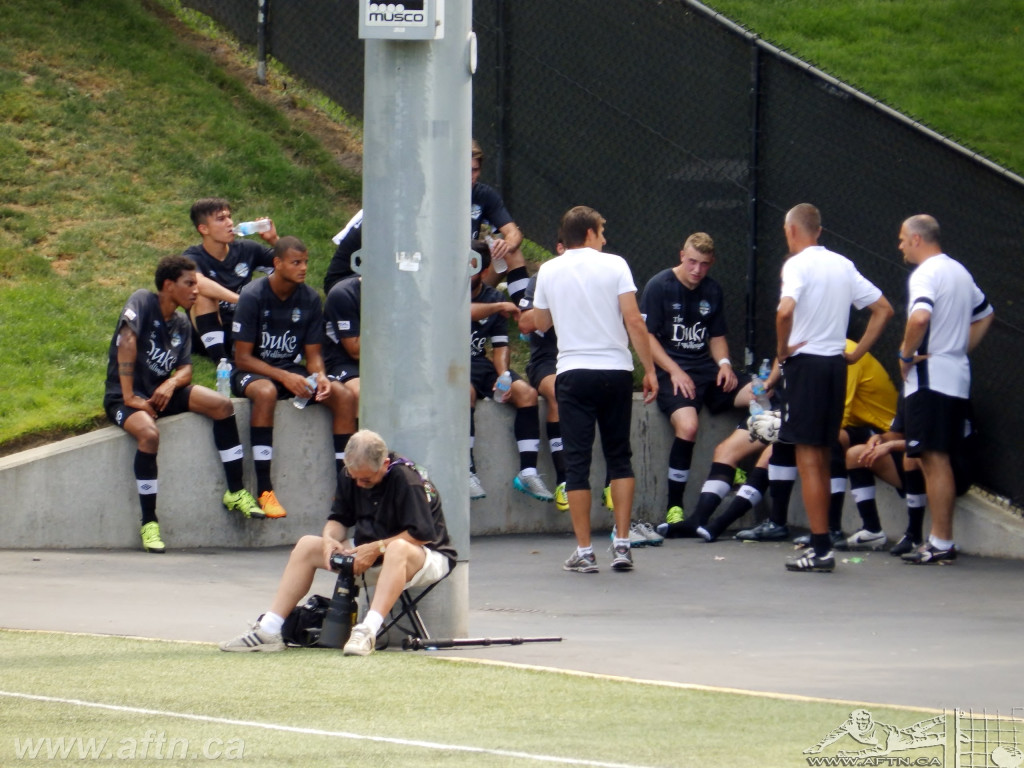 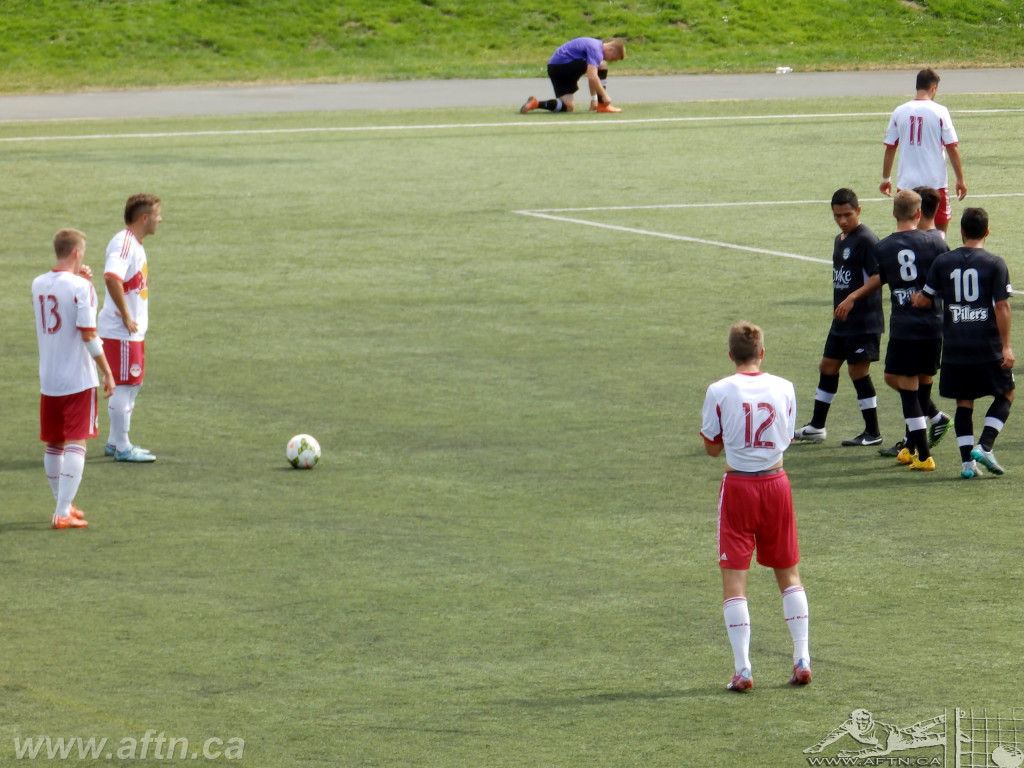 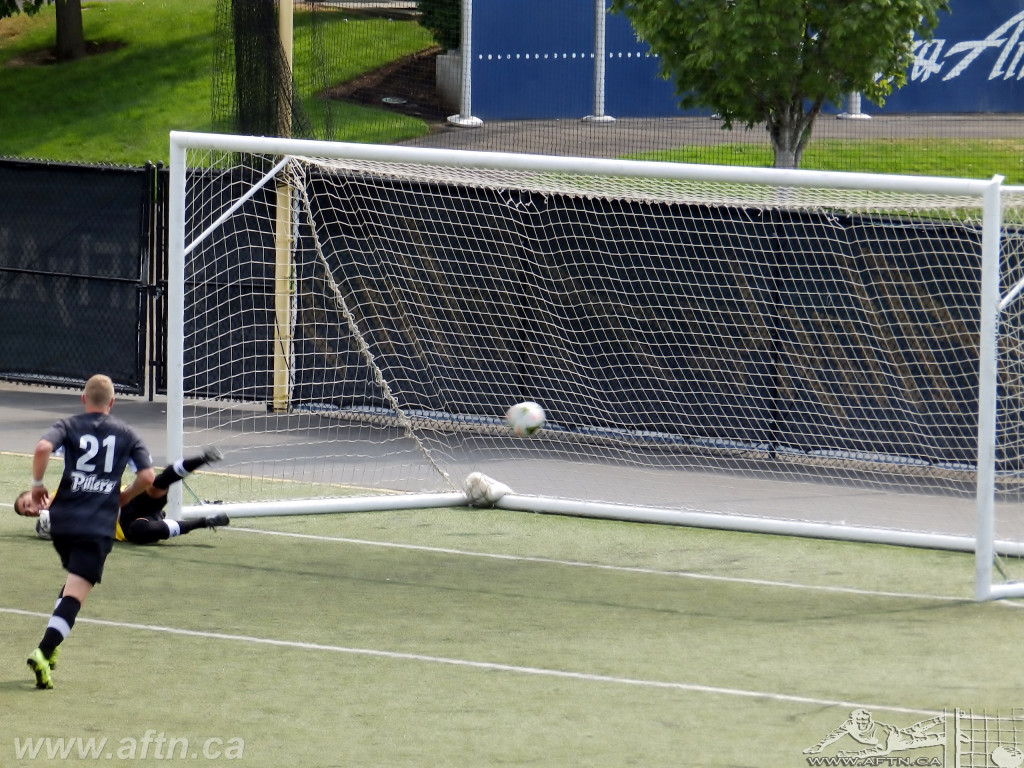 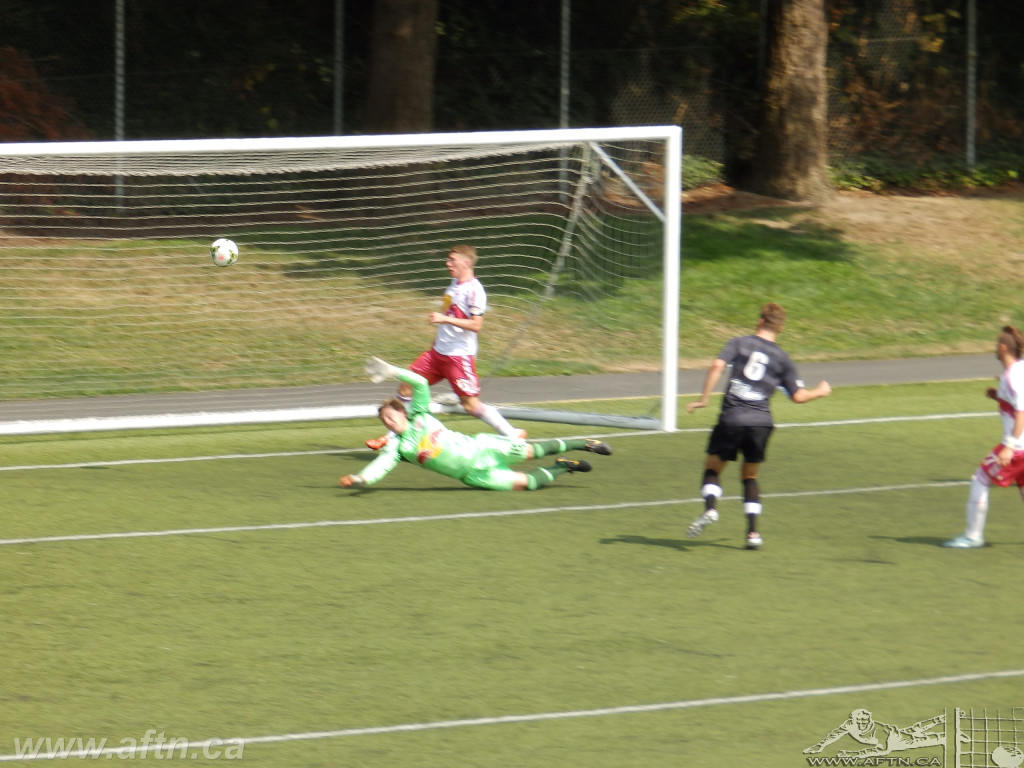 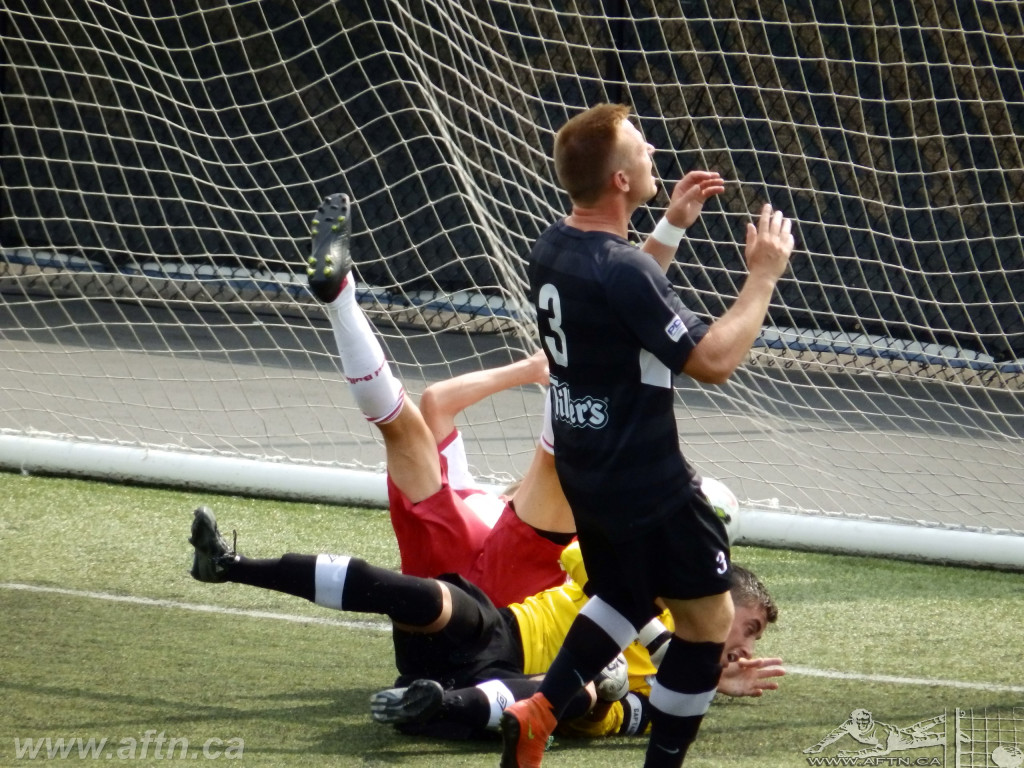 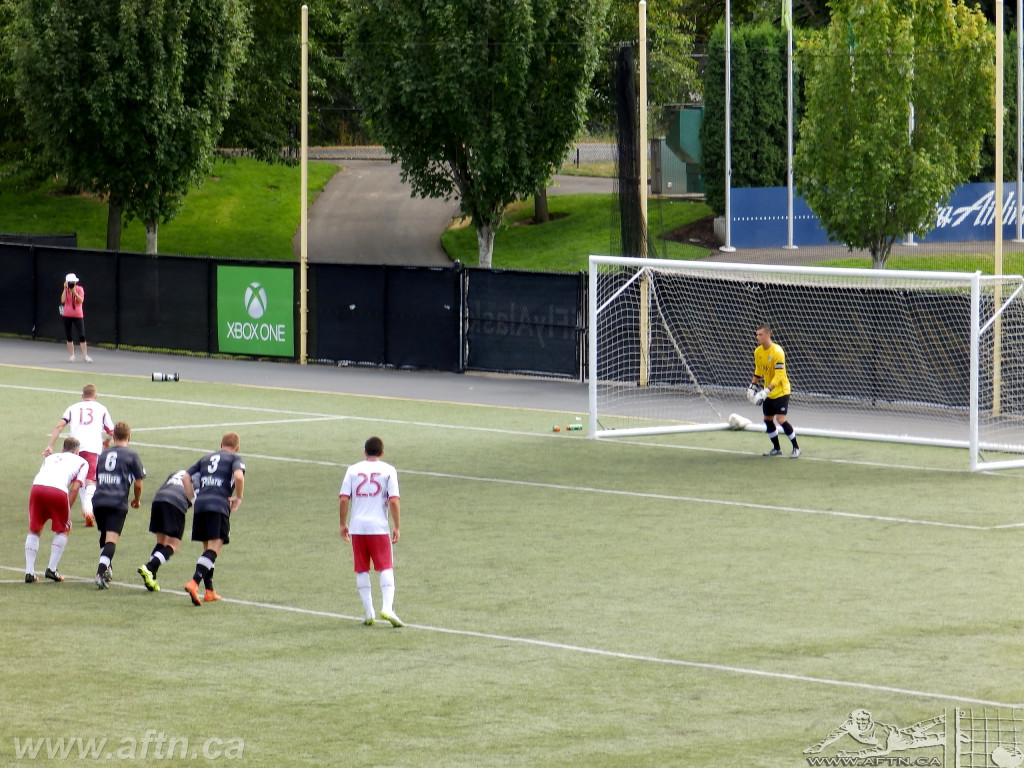 Penalty! New York are given a lifeline in the 79th minute and Thomsen steps up to take it 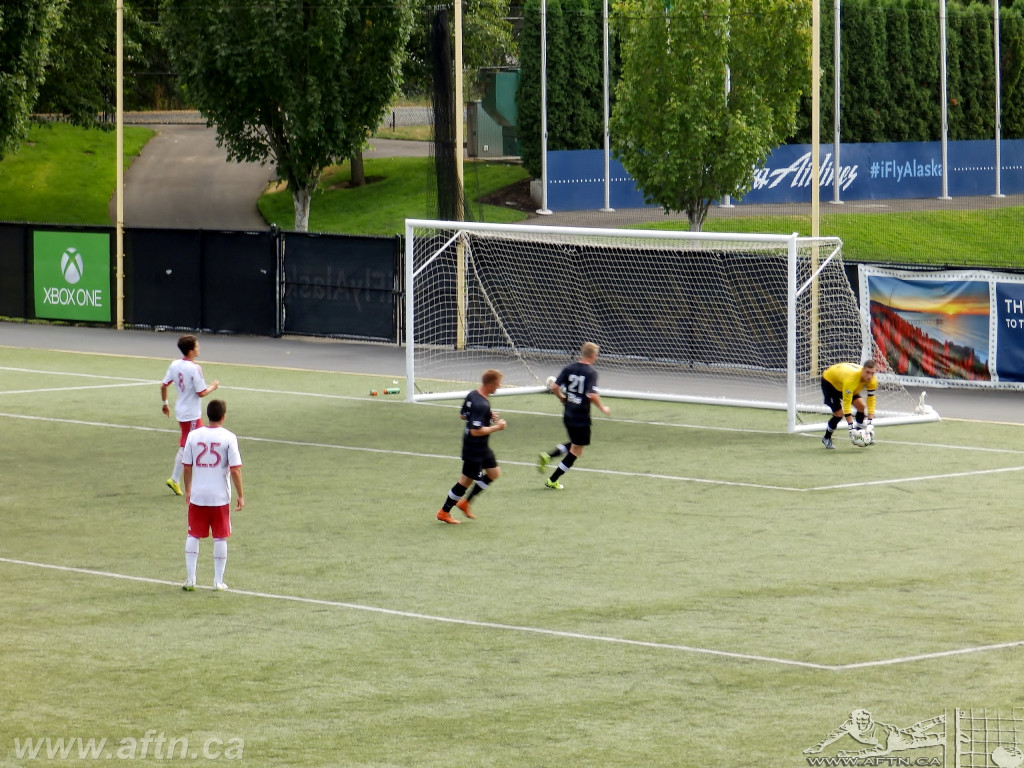 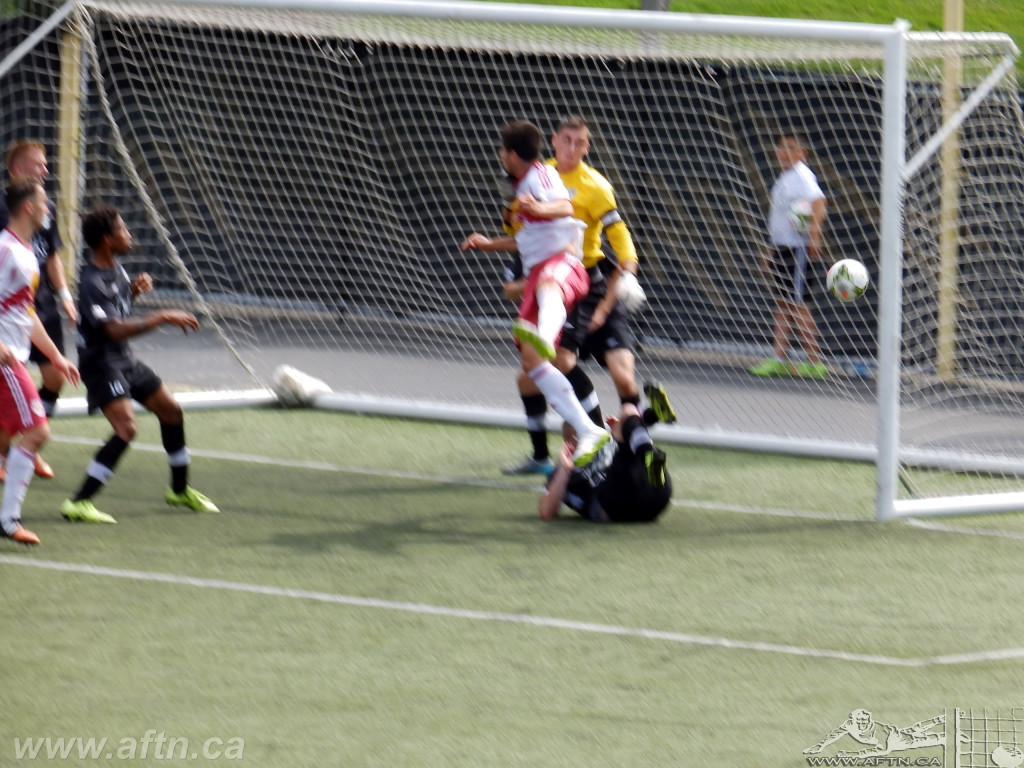 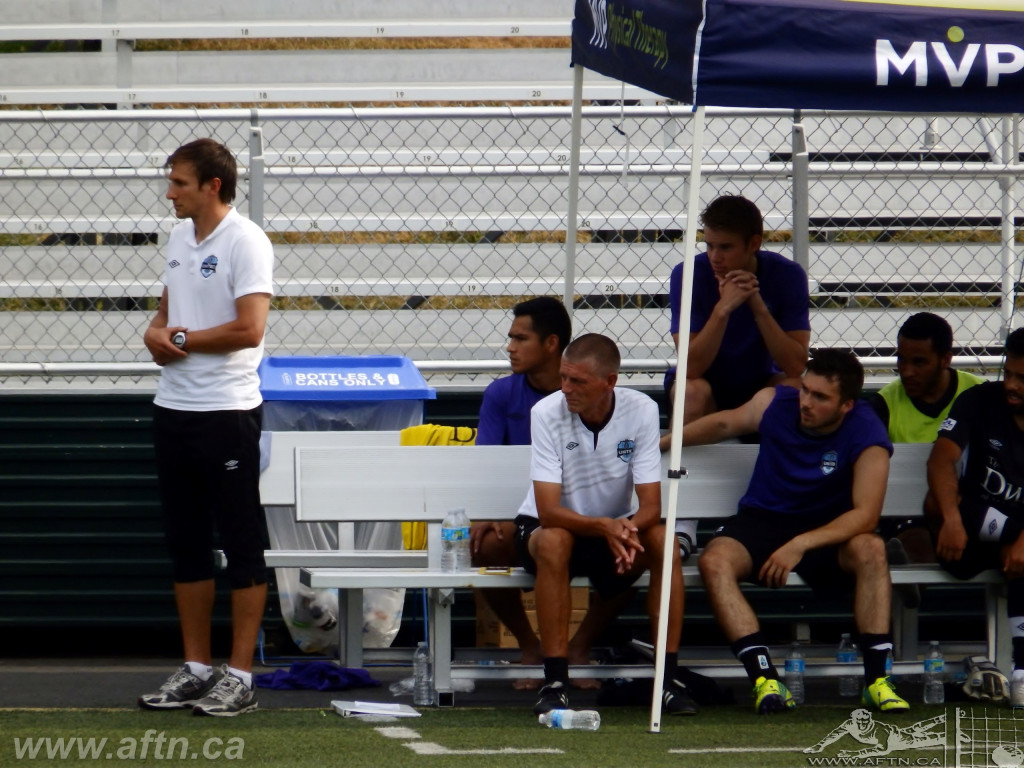 Tension on the K-W United bench 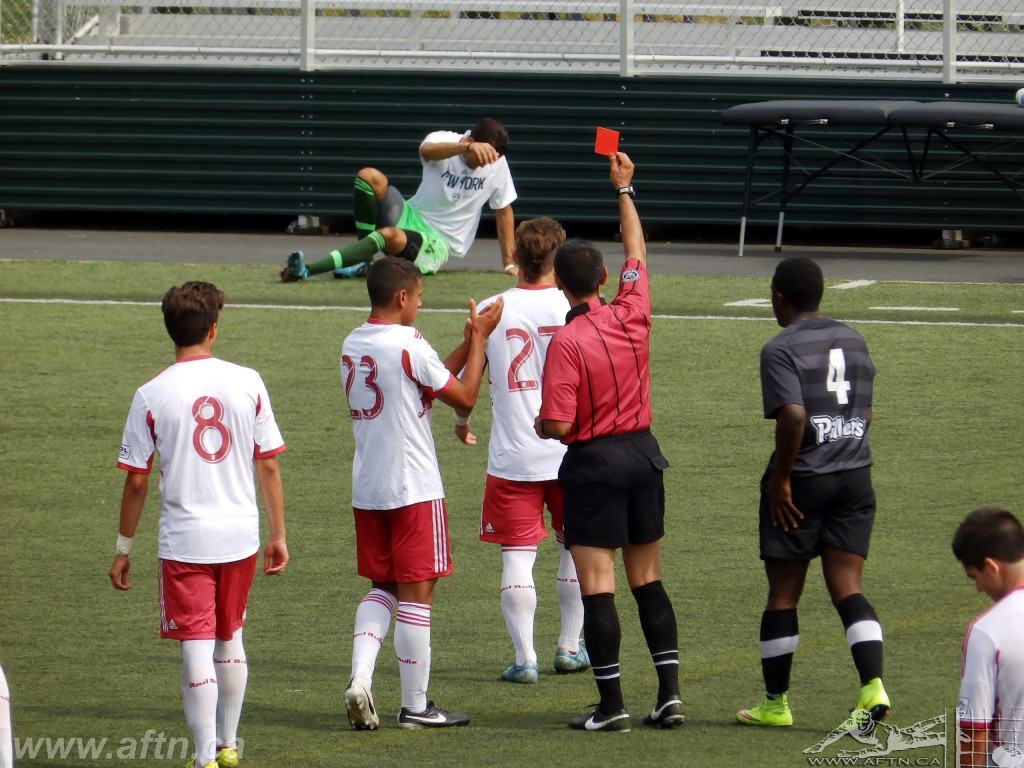 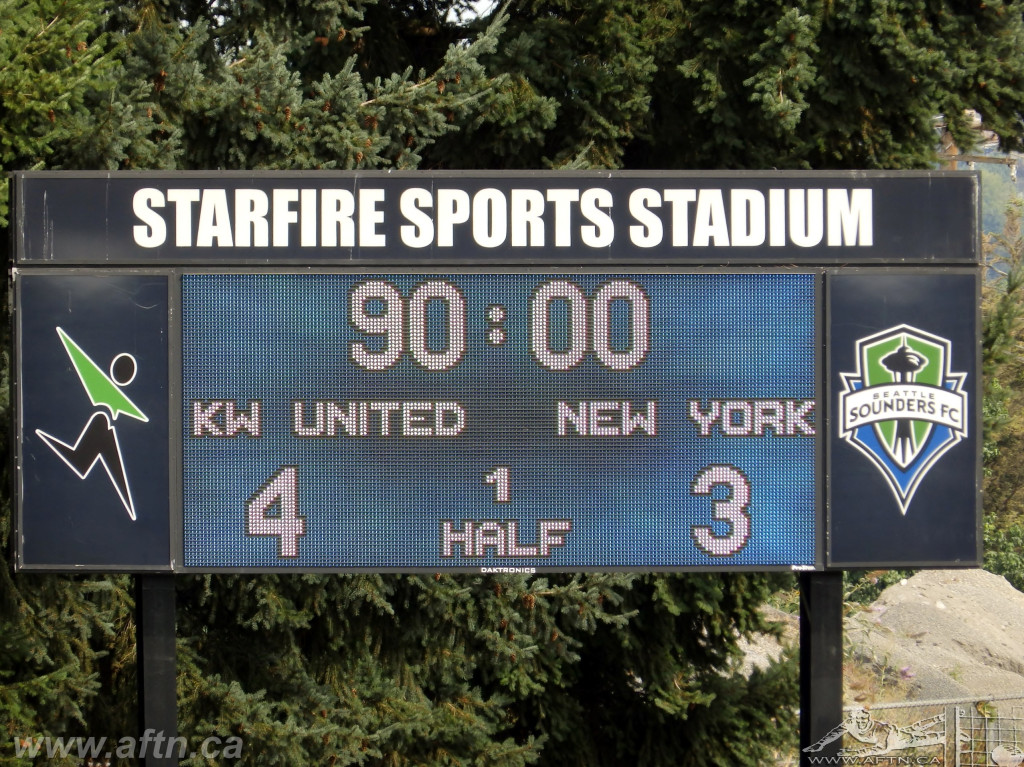 And it’s over! K-W United win 4-3 and claim their first USL PDL Championship! 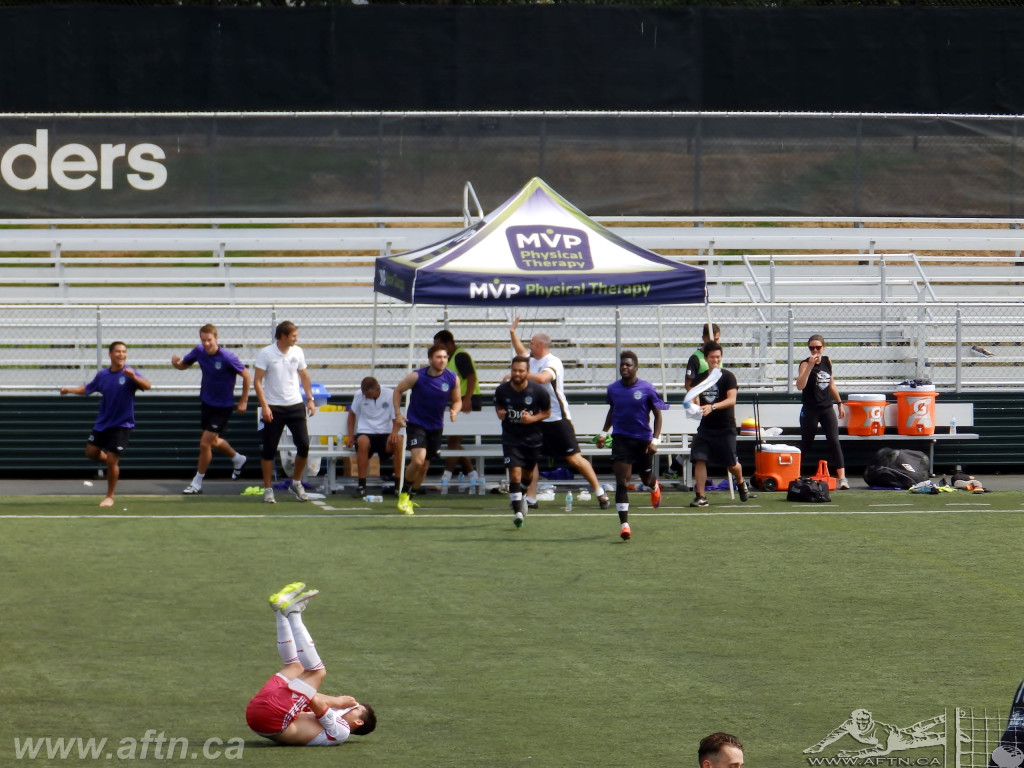 The K-W bench explodes with joy at the final whistle 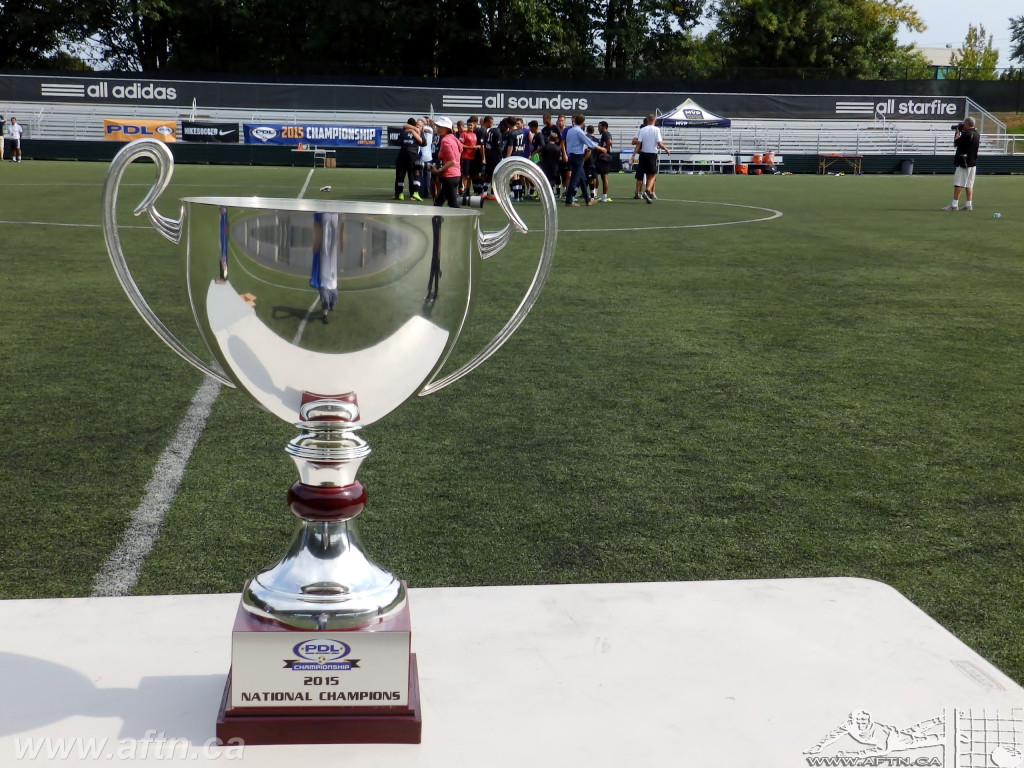 To the winners the spoils 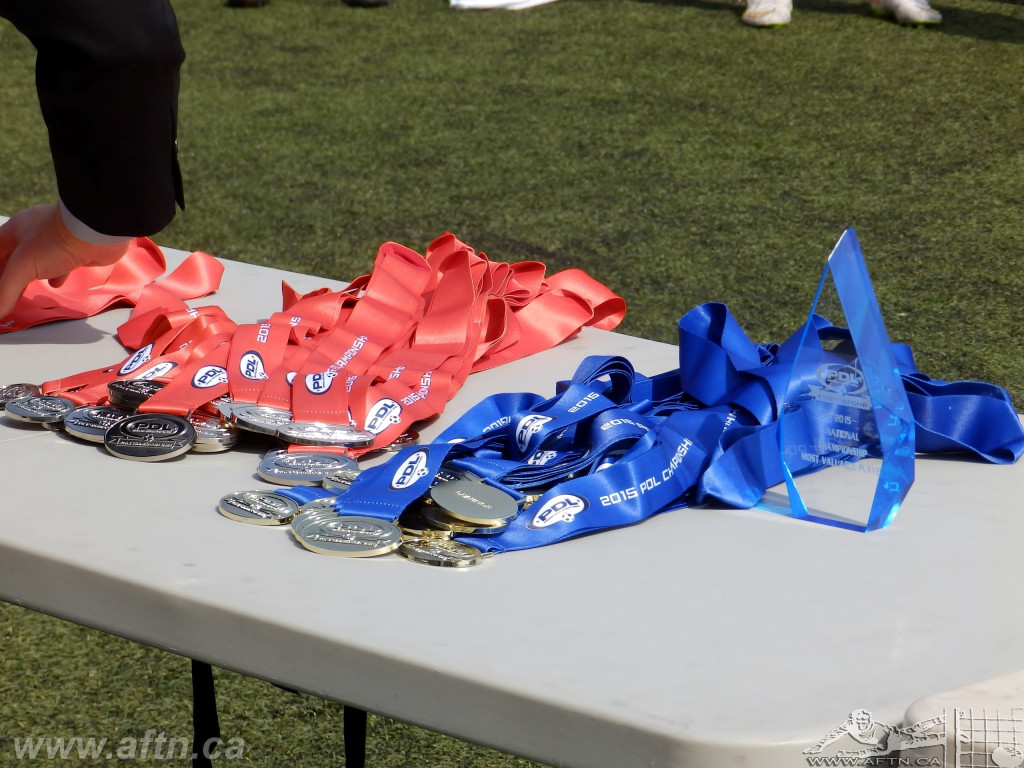 And some shiny medals! 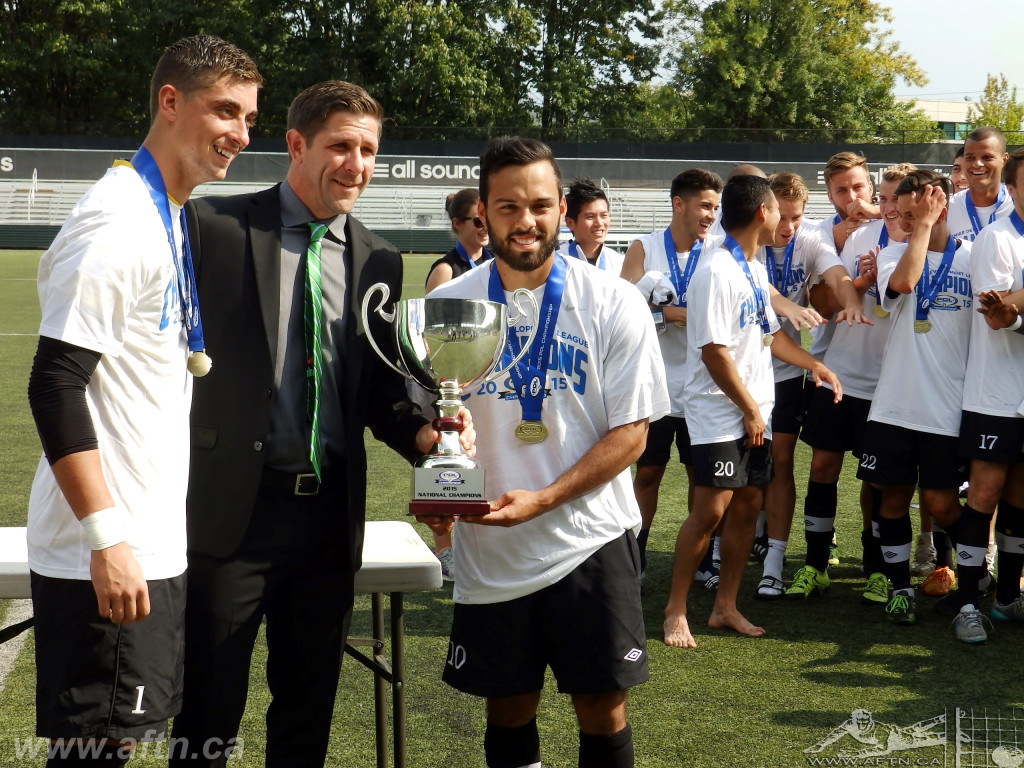 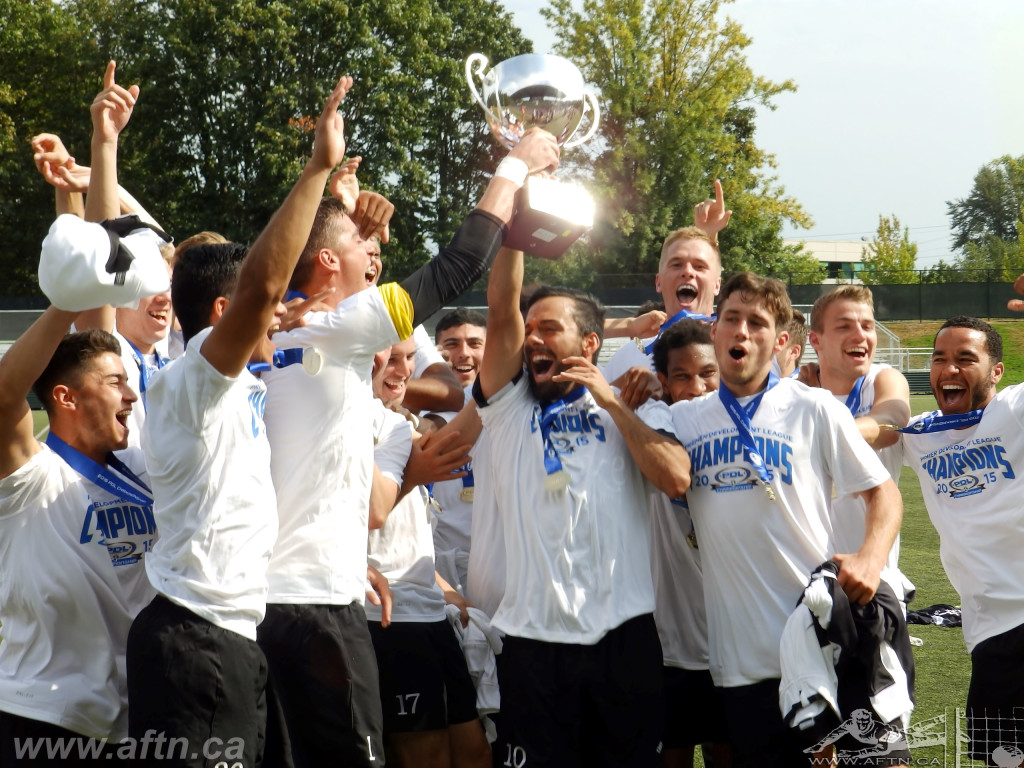 And the jubilant lifting of the Cup 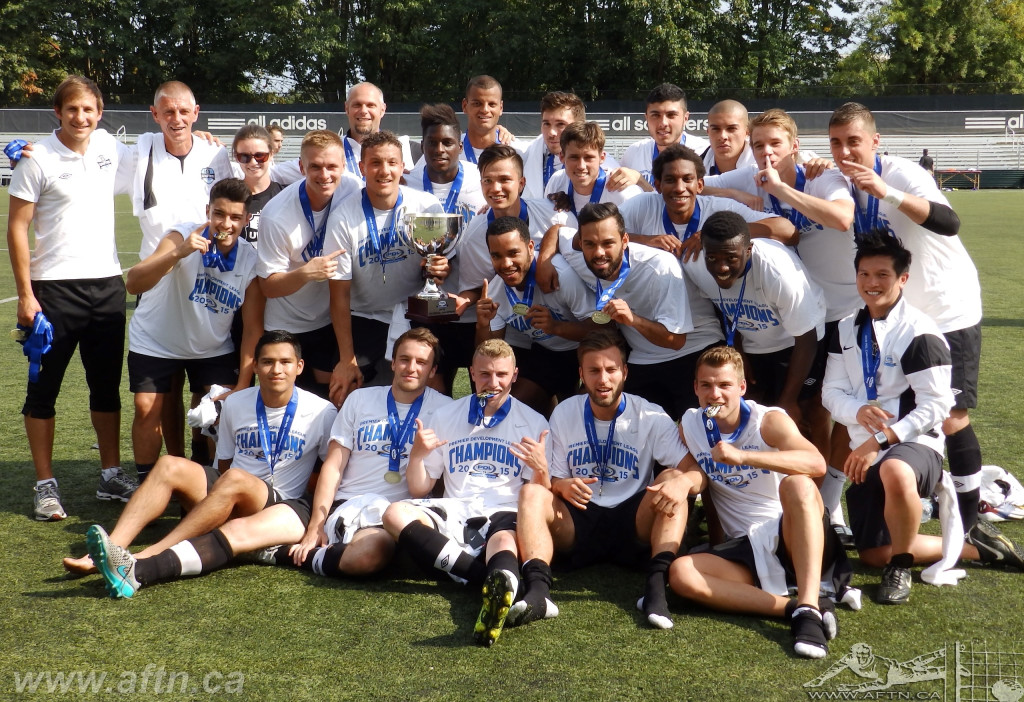 Here’s a full Flickr slideshow of our photos from the Championship game and K-W United’s post match celebrations: