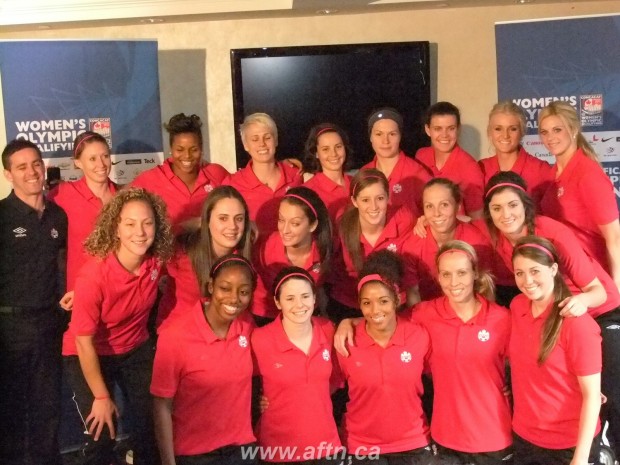 One of the main things which came across with chatting with the girls on Monday was how excited they are to be playing the tournament on home soil, and they’re going to have a little bit of extra support in the shape of members of Whitecaps supporters’ group, the Southsiders.

The Southsiders have bought a section of tickets in one of the corners of BC Place (their usual seats behind the goal are not being used in this tournament).

As of tonight, 108 tournament packages had been sold for the supporters’ section and everyone connected with the Canadian Women’s National Team is happy to have them aboard and they know what they hope to see from them.

Local lass, and former Whitecaps star, Chelsea Buckland is the only member of the Olympic squad never to have played in a senior international tournament. Being on home soil, with home support behind her, just makes it all the more special for the 21 year old:

”I’m excited. This is an awesome ride. Home, in my home town and not just Canada. We’re definitely pumped to be home and I’m super excited to get out there and play.”

What would she like to see from the Southsiders?

”Everything and anything! I think right now they’re just fired up. I definitely hope they’ll be out there as loud as they can be, have all their scarves and paraphernalia. They’re definitely going to be out there supporting us and there’s a lot of Twitter and Facebook information about being part of that bandwagon and right now I’m excited.”

“We want to see the same kind of energy they bring to the MLS games. I’m personally from Toronto, but I do consider Vancouver to be my second home and I think the atmosphere they’ve had out here is incredible, so I hope they bring the same kind of energy and enthusiasm to our games. Hopefully we can have a great relationship with them, like they do with the men’s team”

The Southsiders have a reputation for not only supporting their team, but also of abusing the opposition, and in particular the visiting goalkeeper.

Hope Solo is the player most likely to get it tight, but a lot of animosity and verbal volleys are being held in reserve for Sydney “the Snake” Leroux.

With more women and families likely to be present at the games than the Southsiders usual audience, how do the players feel this abuse will go down in the women’s game and will it help them on the way to glory?

”I don’t want to encourage that” laughed Gayle “but… I’m sure there’s a way they can make it more support towards us and not necessarily abuse towards the opposition. FIFA Fair Play. We do want to promote that. Always!”

Buckland knows just how much fervent fan support can help a team when the going gets tough:

“I’ve heard a few things about them. Obviously women take it a little differently than men do, so it might actually work to be honest with you. You never know.

They were coming up with some great stuff for against our top competitors like the US and Mexico. It’s nothing that we can control. We’re just out there to play. Hopefully they won’t embarrass us too much! It’s that professionalism we want to see from our fans and our players, so I’m hoping they’ll be out there in the right mindset, but definitely attack them a little bit and get them on their heels. That’ll help.”

For the Southsiders, and other football fans in Vancouver, this tournament has a lot more than national pride and Olympic qualification on the line.

”I think it’s important that the Southsiders support the Canadian Women’s National Team because we are soccer supporters, Canadian and they deserve a home field advantage” Southsiders Vice-President Brett Graham told AFTN.

“The Vancouver public needs to support this tournament to prove to the CSA that we are deserving of bringing other international games to the city, whether that be Men’s World Cup qualifiers or the 2015 Women’s World Cup Final.

If you love this country, and the game, then you should support the ladies. And if anyone doesn’t like women’s soccer they can just come out and boo Leroux!”

The support will come in all of the three group games and then hopefully the key semi -final and onto the final.

Coach John Herdman told AFTN he knows the fans will do what is needed:

“In that game four, when we really need it, the fans will get behind us.

He also had a word of caution for those fans attending though:

”There should be an appreciation that teams are going to try and frustrate the life out of you. When you see any team that is higher ranked , the natural instinct and inclination of coaches is put as many players behind the ball, hit them on the counter attack, hope you get a set piece. And teams are going to do that and it’ll look frustrating and at times it will look a bit disjointed.

So when times are getting tough, I’m hoping the crowd just gets behind the team and that’s what they’re going to need. That’ll help us stay focussed and clear and just the trust that we’ve got the trust of our fans that we can do it.

Ideally, what does Herdman want from all Canadian fans in attendance:

”I think an appreciation of what the tournament would potentially throw up and when the going gets tough, for the fans to get behind us.”

I think we all echo those sentiments.

Good luck to John and the girls. Let battle commence. London is calling.