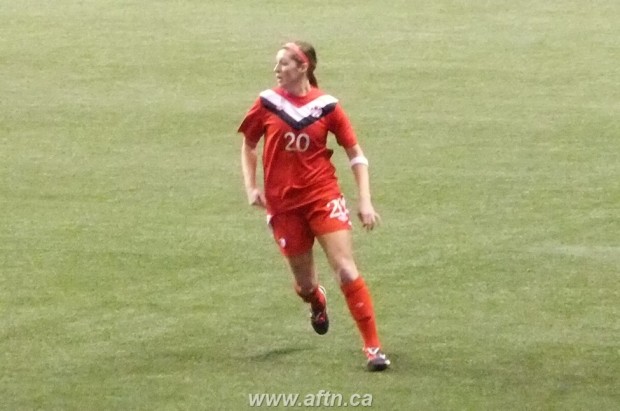 Before the 2012 Olympic qualifying tournament began, CSN’s Daniel Squizzato caught up with BC girl Chelsea Buckland to see how she was preparing for the qualifiers.

Now that the tournament is over, and having also spoken with her at the pre-tournament presser and for our ‘West Coast Soccer Weekly’ podcast, it seemed only fitting to touch base with Chelsea once again after last night’s final, to see how it had all gone for her on a personal level, how she felt after the US defeat and what lies in store for her.

Chelsea didn’t feature in the semi-final or final, but played in all three of the group games, clocking up 135 game minutes and making her first international start against Cuba in Canada’s second game.

As a local lass, how did she find the whole experience?

“Unreal. It was one of the biggest events of my career so far with the national team.

It was my first international FIFA event that I could officially be rostered with. I was at the World Cup, but this was ten times better, being in my own back yard. Being here in front of my own home crowd, my family, my friends. It was definitely my time to come out here and prove people wrong.

I did well in the games that I got in, the first three. It’s exciting to be home and I think this whole tournament, just as a wrap, completely added more to my experience and my career, and it’s going to be even better moving forward.” 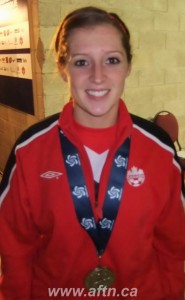 Friday was such a high for the team, was it hard going back out there for the final and then losing such an early goal?

“It was tough. That Friday night game was unreal. In that moment we just wanted to win. That was our number one goal, to get to the Olympics.

I think we put everything on the line that Friday night and so unfortunately, in a tournament like this where you got back to back games, and you only had one day to recover, it was tough. We only can do what we can.

It’s tough, but we can come back for sure.”

As disappointing as the loss was, this shouldn’t be a time for feeling glum. The team has qualified for the Olympics and they have a real chance at a medal in London this summer.

The preparations for the games begin now and everyone associated with the team knows that there isn’t time to rest on their laurels.

Friendly matches are being lined up with some of the top countries in the world, and the Cyprus Cup will be coming up for both the mens and the womens teams.

There’s a lot of hard work lying ahead for Chelsea and the rest of the girls. What are her plans for the next six months in the build up to the games?

We get a few days off then we get back into camp. The next few months are just going to be to the grind. We’re in camp, we’re travelling around the world, to figure out tournaments and situations like this, so we can get in there and prepare the best we can for London.

Right now I’m 110% committed to Team Canada and preparing for the best event ever.”

Chelsea’s commitment to the national team has even seen her take some time off from Oregon State University to give her country her all:

“I’m not going back to school. I’ve completely signed with the national team. I’m fully committed to preparing for the London games. School can wait till after the Olympics.

I’ve taken the next eight months off of school. I will head back after the Olympics, back down to Oregon State to complete my senior year. This fall I go back down there and compete with those lovely ladies.

I miss my school a lot, but right now, this time is for the Olympics.”

Great to see such commitment. Today’s announcement that the WPS has been suspended may affect the preparations of some members of the Canadian women’s team, but if the CSA can find the funding and get the commitment to keep the whole group together, who knows what development and confidence John Herdman can give them.

They may have been outclassed last night, but the future still looks promising.

Good luck to Chelsea and all the girls. Go over there and bring back a medal.