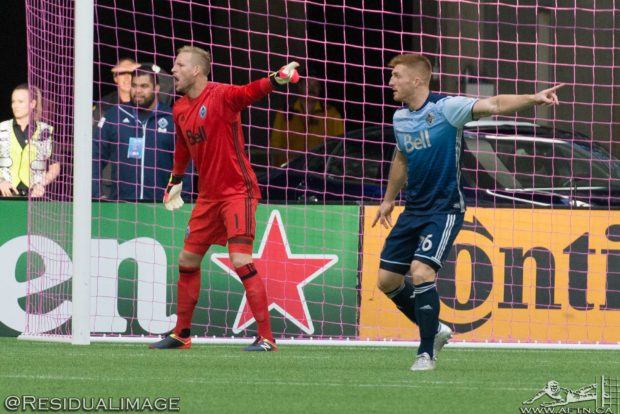 So we decided to launch a weekly(ish) Whitecaps caption contest from some of Tom’s photos from the last season or two. There’s some crackers to pick from.

Every week or so (when we have time and/or remember), we’ll tweet out a photo for you to come up with a funny caption to. The next day, once we have a few replies, we’ll post it up on the site and on Facebook for everyone else to share their captions.

No prizes on offer, hopefully just guffaws. Football’s meant to be fun after all!

Here’s what the ‘Caps Twitterverse threw out when we launched it last night with the above photo (in the order they came in). Can you come up with any better? Let us know in the comments section.

The only one we haven’t embedded was from Murray as he had a locked account. But his entry was one of our favourites…

Everyone one in that section over there writes for AFTN, I swear!!!!! https://t.co/ZvnCcmC5k5

@aftncanada Pass it to Davies!

@aftncanada everything Camilo owns in a box to the left

Well, you can tell by the way I use my walk,

I'm a woman's man: no time to talk pic.twitter.com/TkogzxCPfe

@aftncanada "Pedro, the airport is that way!"

Timmy: "Comeon David, now the right arm. Let's yell at Heineken rep over there and maybe they will send us a free case!"#VWFC https://t.co/smxNCjtPT0