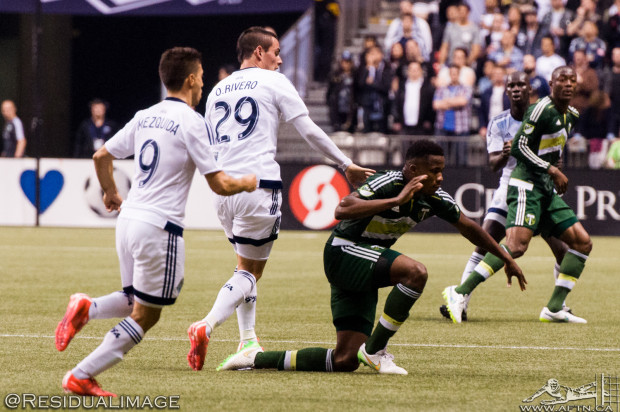 Those heady days in June, when Vancouver Whitecaps were sweeping past all those before them, now seem so far away.

Losses to Colorado Rapids and Sporting Kansas city now see the ‘Caps on the verge of a three game losing streak as they head into Portland tonight. Crazy to think after all the good work in taking points at LA, New York and New England.

Three defeats on the bounce would undo all that hard work and bring the ‘Caps crashing back down to earth and in the Conference standings. You can almost hear all the naysayers murmuring “summer slump” already. It might very well be, as it’s not going to get much easier from this point in.

Grabbing three points in Portland tonight would be massive. With a depleted defence, even taking a point at Providence Park would be big, stopping the rot and who knows how important in the grand scheme of things come the end of the season.

With all this in mind, does ‘Caps head coach Carl Robinson try and adapt his gameplan accordingly with the aim of taking anything he can from the Cascadian derby?

“No, we approach every game to try and win the game,” Robinson told us at training on Thursday. “Obviously we know we’ve come off the back of two defeats. It happens. Major League Soccer is about defeats and wins.

“We’ve put ourselves in a good position. We know we can be better. We’re continuing to strive to be better and when you get banged up, which we are at the moment, it’s important that you try and nick things and take things when no-one expects you to. Probably no-one expects us to go and get a result in Portland. I do, because I’m confident in my group of players. We’ll give it our best shot and hopefully that might be enough.”

It’ll be tough. It always is in Portland, in front of that hostile crowd. The Timbers have won six of their last eight games. The two defeats in that spell, to LA and Philadelphia, were both on the road and were hammerings. They’ve won their last five home matches, however, conceding just one goal in the process.

But the Timbers and the ‘Caps share a common trait this season and it’s one that Vancouver will hopefully be able to exploit.

Both teams have fallen behind in seven of their 20 matches this year. Neither side has managed to comeback and win. Vancouver have fought back for a point once, while Portland have loss all seven of those games.

So is it going to be a case of whoever scores first in this one wins it?

“Maybe it’s got nil-nil written all over it then,” Robinson joked. “Maybe. In any game of football the team that scores first, the probability that they’ll win the game is more than likely.

“We’ve got our gameplan. We’ll try and stick to our gameplan with a semi-depleted roster. We’ll be fine.”

Robinson has talked a lot about fine lines this season. Taking something from this match or not could be the very fine lines between where the ‘Caps end up finishing in the playoff places.

Crazy to think about such things in just July? Nope. Every single point won and lost will be crucial from this point in, in an ever-tightening Western Conference.

LA’s win over San Jose last night sees the money bags jump to the top of the West, albeit having played two games more than the chasing pack. Four points now separate first and sixth place. In fact, Western teams currently occupy the 2nd to 7th positions in the race for the Supporters’ Shield.

As of this morning, the ‘Caps are sitting third in the West, two points off first and seven points off San Jose in seventh. The Earthquakes loss on Friday was big in terms of having a little room for error and some breathing space, but San Jose have a game in hand and come to face Vancouver next Sunday. They win both of those and they’re right back in it.

All but one of the Whitecaps remaining games is against Western Conference opposition. They’ve fared worse in such games the past couple of seasons, and the current standings make for little room for error, but midfielder Mauro Rosales believes it’s better for the ‘Caps to have these games.

“These are teams that we are playing three times, so we can recover from a loss,” Rosales told AFTN. “We have to keep winning against anybody, from the other Conference or from our Conference. The main thing is get points and earn points right now. It’s the time to keep building our team and to get it to the best form for the last part of the season and get into the playoffs.

“With a long season we have to obviously work hard to get to the position that we want. We lost a few chances in the last couple of weeks. Not earning our points to separate from those behind us. But I think everybody is having trouble with that at this part of the season.

“Everybody has ups and downs. There’s not a runaway team in MLS. That’s why it’s so tight. As soon as we know which position we are and remember how good we were in the past games and keep doing it and keep believing in our group, then that is the biggest point.”

Vancouver win in Portland and they have a four point gap over their Cascadian rivals and jump back to first in the West. Lose and they fall two behind them, dropping down the standings in the process.