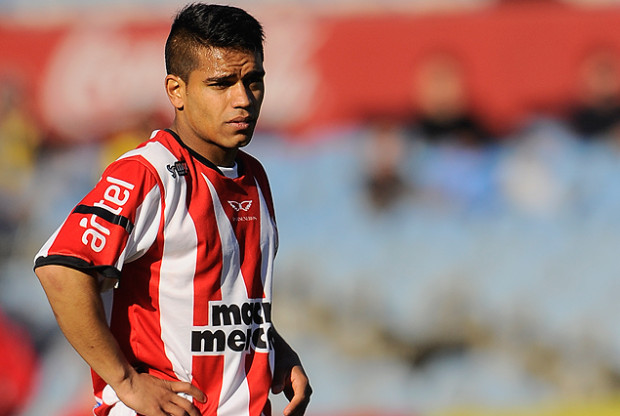 In what was possibly the worst kept Whitecaps transfer secret since, well, the last one, Uruguayan winger Cristian Techera was officially announced as a Vancouver Whitecaps player on Thursday.

The 22-year-old Techera heads to the Whitecaps on a season-long own with the option to buy from Uruguayan Primera Division side River Plate Montevideo. Nothing is every simple with such transfers, but things were complicated even further this time around as the ‘Caps had to give Toronto allocation money for their first right of refusal. You just got to love it.

The 5″2′ winger joins the South American throngs at the club and ticks what was perhaps coach Carl Robinson’s final box in his new season shopping list – a natural left winger. Well he can actually play on both sides, so that’s an added bonus! Robinson’s certainly delighted to finally have him on the squad.

“It’s a great signing for the club,” Robinson told reporters on Thursday. “We’re delighted to have Cristian on board. Hopefully we can get him here quicker, as quick as we want, next week sometime, with all the visas and paperwork done. We’re delighted to have him. He’s coming in to the right environment here. He’s coming into a place where he knows a couple of the guys.”

Techera speaks little English at the moment but he’ll be made to feel comfortable in his new surroundings by the number of his fellow Latinos at the club.

Amongst them will be two familiar faces in Nicolas Mezquida and Diego Rodriguez. Techera played alongside Mezquida on the regional team of Paysandu years ago and has spent the last three seasons as a teammate of Rodriguez’s younger brother Leandro.

Techera came through the youth system with Peñarol, before moving across the city to sign pro forms with River Plate in the 2009/10 season. He made his pro debut with the Darseneros on April 11th 2010, coming on as a second half sub in the 2-2 draw with Cerro Largo.

It’s always somewhat tricky to find exact stats for some of the South American players, but from what we can initially uncover, Techera went on to make 84 appearances, scored 20 goals and registered 17 assists in five seasons with River Plate, in all competitions. He played 5,013 minutes overall, picking up one red card and nine bookings.

Techera’s farewell to the River Plate supporters came in Sunday’s 2-1 loss in the Montevideo derby against Peñarol. Techera didn’t get on the scoresheet, but he did bag both of River Plate’s goals in the 2-1 win against Fenix the week before.

With his signing imminent, Robinson was an avid viewer of Sunday’s game against Peñarol and was happy to see his new player come through unscathed. He also feels that anyone who has watch Techera play in these last two games will have been given a great insight into what the wee winger will offer the Whitecaps.

“I watched him with great interest hoping he’d get through that,” Robinson admitted. “I think you could see in that game, against a top Peñarol team, what he can do and what he’s very good at. We know that he’s quick and he’s got great technical ability. He’s got a lovely left foot and takes set pieces and brings something different to the table to than what we’ve got here.

“He’s an addition to the group. He’s going to come in and fight for his place. He’s a winger, a natural winger. We lost Seba last year, who was an outside to in player, and we’re delighted to bring Cristian on board.”

River Plate were obviously disappointed to be losing one of their key pieces. Techera has scored 10 goals in 24 matches for them this season and reports last week out of Uruguay indicated that the team were disappointed by just how much they are initially getting out of the deal.

That’s not the Whitecaps concern if they’ve let an important player go cheap and the focus is now on integrating Techera quickly into the Whitecaps first team squad. Part of that will see some movement of season long loans to the USL squad, with Andre Lewis the prime player there.

Techera now becomes the latest signing from what was a very productive pre-Christmas South American trip from Robinson. The winger joins Rodriguez and Octavio Rivero in the haul he brought back, and the ‘Caps coach explained just how the move came about.

“I went down to watch him in the offseason when I went down to see Diego and Octavio,” Robinson said. “Cristian caught my eye as someone who could help this group moving forward and I earmarked him then at that time to try and bring him in. Fortunately enough we were able to do that today.”

If he has anything near the initial impact that Rivero has had, then this is going to be fun to watch.