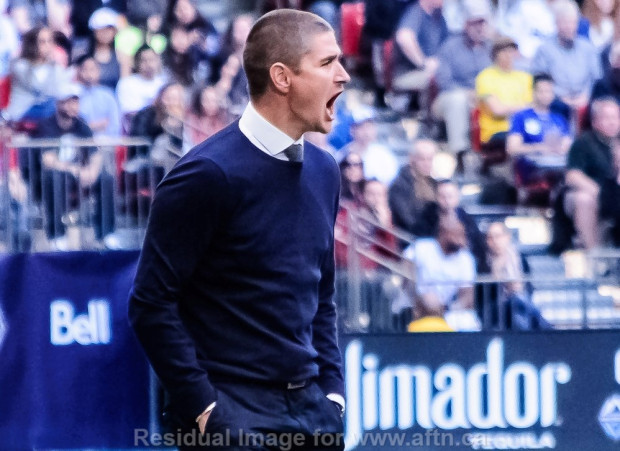 To be the best, you need to beat the best. That may be something of an overused phrase these days, but it certainly has a ring of truth to it in Major League Soccer circles.

And when you’re talking about the best in MLS, you don’t really have to look much further than LA Galaxy and their coach Bruce Arena.

I’m sure you don’t need reminding, but the Galaxy have been in nine of the 19 MLS Cup finals to date, winning five of them, including three of the last four. Arena has won five MLS Cup himself, three of them with LA and two with DC. A formidable force and one that rolls into town on Saturday to face the Whitecaps.

Oh, and of course, Vancouver have only ever beaten LA in MLS action once in 11 attempts.

Carl Robinson is confident his team have what it takes to grab that second win this weekend. Standing in their, and his, way is a team managed by a coach Robbo is full of admiration for.

“He’s the best,” Robinson said bluntly when asked by reporters this week what makes Arena so successful. “You can talk about young coaches coming through and all that but he wins things. He gets the best out of his group of players. He’s got some fantastic players to choose from by the way.

“If you win and you’ve got good players and you’re able to manage them and consistently do it, not just one year, but consistently do it, arguably you’re the best. And he is the best. The way he conducts himself, the way he manages himself, the way he manages his players. To all of us young, aspiring coaches, he’s the model that you want in North America. So as I said, I just think he’s the godfather.”

This may read a little strange to some. Why is Robinson bigging up his opponent ahead of the game? Is he maybe too much in awe of him and sees him as invincible you may wonder?

Far from it. Robbo’s made it very clear on numerous occasions that he wants both himself and his team tested against the best. It’s simply respect of his experience and his achievements in the game.

“Bruce and Sigi [Schmid] are arguably the two best managers in the league without a doubt,” Robinson told AFTN when we spoke to him about this just before the season started. “I enjoy pitting my wits against those two guys when we come up against each other. I’m sure people will tell you that I still haven’t beaten Bruce Arena yet, which is great because hopefully we’ll get a couple of cracks at him this year.

But he also wants to learn. And games like this weekend’s one against LA are part of where he does that. As is sitting down and chatting with the likes of Arena on occasion to pick his brains.

“I’ve sat down with him a couple of times,” Robinson told reporters this week. “Is he going to give me all of his secrets? No, he’s not. But the way he puts his teams out is very organised, but he’s got good players and consistently got good players.

“When the end of a season comes and you win a championship, and hopefully one day we will get there, it’s important that you build again. And what he’s managed to find the art of is strengthening his group when he loses players, but not having a detrimental effect on the group because they’re always in the MLS Cup final.”

That’s exactly where Robinson wants to be with the Whitecaps. Every manager does obviously, but the ‘Caps coach sees the work he is putting in now and the building process that he has underway as stepping stones to that ultimate goal. And he has a firm belief that that day will come for Vancouver.

“Do I think I can win MLS? I’m sure you’ve got 20 odd managers that think they can win MLS Cup,” Robinson told us preseason. “The reality is, the same guy’s won it three years out of four and he’s probably the best one, but you never say never.”

LA and Seattle have been dominant forces in MLS, particularly in the Western Conference, these past few years. It’s no surprise as they are led by the two coaches with the most wins in MLS history in Arena and Sigi Schmid.

The pair of sexagenarians are the MLS old guard. How many more years they have in them is impossible to say. Bobby Robson was 71-years-old when he was sacked as Newcastle boss in 2004. Arena is 63 right now and Schmid has just turned 62. Orlando City manager Adrian Heath is the next oldest coach in the league at 54, with Frank Yallop the only other coach to be 50+ and he just squeaks in.

The future of MLS is going to be as a young coaches league and that future is pretty much already here.

Of the 20 head coaches in MLS, 11 of them are aged 42 or under, with five of them still in their 30s [Also interestingly, only four of the 20 have no experience of playing in MLS]. Robinson falls into that last category. At age 38 he is the third youngest coach in Major League soccer right now. Only Philadelphia’s Jim Curtin (35) and DC’s Ben Olsen (37) are younger.

As far as Robinson is concerned, it’s easy to see why this is the case. He feels that Major League Soccer is the perfect breeding ground for young coaches to cut their managerial teeth and applauds the league for going in that direction.

“What MLS does, is it gives opportunities for young coaches, their first proper job,” Robinson told AFTN. “A common fact in England is that around 80% of first time managers never get employed again in Europe and in England especially because they’re not right and they’re not ready and they don’t succeed in their first job.

“MLS is fantastic at giving young coaches opportunities and you’ve got to be ready for it. You’ve got to take your chance because it’s easy to blame someone else if you don’t take the opportunity and grab it with both hands. But you’re only going to do it with hard work. You can’t get lucky. Sometimes people get lucky, but in the end you get found out, so I’m grateful to MLS for giving me this opportunity.”

Coaching was always in Robinson’s plans for when his playing days came to an end. He’s envisaged a bit of a slower route, with a longer spell as an assistant before taking on his own managerial reigns, but now that he’s there, he’s most certainly done what he says above and grabbed that opportunity by the throat.

And he’s enjoying every minute of it so far.

“I always planned on doing it when I moved over in 2007,” he told us. “To coach here, to be an assistant for a number of years but also to be a manger. Other questions get asked of me. Am I happy? I love MLS. It’s brilliant.

“The league’s growing, the players are growing. The standard of coaches has to get better because the quality of players are getting better, the league attendances are rising, the TV attendances are going through the roof. More people are watching it, so we have to get better and that’s generally across the board. Anyone who doesn’t think they do are in the wrong job.”

So is there a little bit of correlation in the fact that the young manager is building a squad of young talent? And after being given an opportunity himself, he’s keen to give his own young players their shot and their chance to prove themselves?

“I did get the job last year. Whatever people’s thoughts were on it, it was irrelevant to me. I knew what I wanted to do and I know what I needed to do, and I took the opportunity with both hands.

“Now, a year down the line, I’ve still got a lot of progression with my development. I still analyze myself. I still work hard. In fact, I work even harder this year than I did last year because I know now how to prioritize what needs to be done in the short and medium term. There’s a plan in place.”