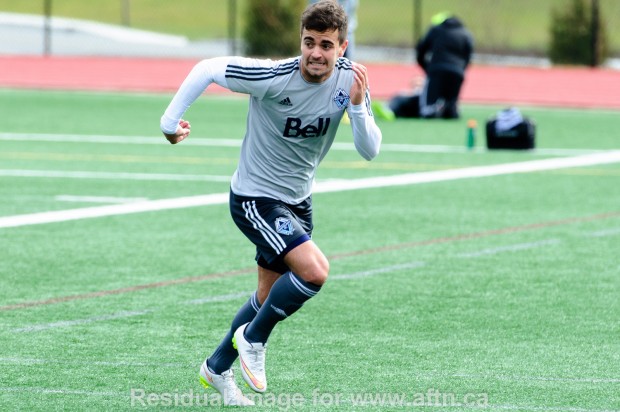 Vancouver Whitecaps MLS squad may have a very international feel to it, but CSA mandated squad restrictions will always make for a very Canadian heavy WFC2 squad. With 50% of the roster having to be Canucks, we’ve discussed the pros and cons of it all before. Not that any quota is an issue for the Whitecaps, considering their strong Residency program.

Of the 15 members officially signed to the USL roster, 10 are Canadians, 4 are from the US and the ‘Caps are using only one of their available seven international spots. Domestic talent to the fore, but it may be that one lone international player that starts to steal some of the headlines as the season goes on.

Spanish winger Victor Blasco is the man flying the lone foreign flag and it’s already clear from watching him in preseason matches and training sessions that he’s an exciting talent.

The midfielder got the start for the Whitecaps’ first ever USL match on Sunday down at Seattle. He didn’t make a huge impact, but then did anyone in the 4-0 loss? But he did show glimpses of what he can do when he can run at defenders.

Blasco’s road to the Whitecaps is an interesting tale to tell.

The 21-year-old came through the fabled Barcelona academy system before leaving to play with the youth and reserves teams of Mallorca, Cornella and Sabadell. Coming to play in Canada was likely one of the furthest things on his mind, but after impressing the then SFU Clan head coach Alan Koch on a scouting trip to Europe, that’s exactly what happened. Now, within a year of coming over, he’s signed a pro deal with the Whitecaps.

“When he came to see me, I was playing for Mallorca,” Blasco told AFTN about his first contact with Koch. “In Spain, there is a great economical crisis, so he offered me a scholarship. It wasn’t an easy decision, but my family told me if you want to study, this is a very good opportunity for you. Not only being in a sporting environment but also in an academic place.

“As I said, there’s an economic crisis and it’s a bad moment in Spain right now, so I thought it was a pretty good opportunity for me, and here I am.”

That in itself is a good story, but it’s what happened between that scouting trip and his signing with WFC2 that we find the most interesting part of his journey so far. 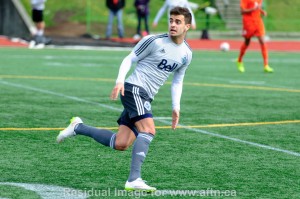 Blasco was signed to play for SFU, but in a unique deal, he was loaned out to Vancouver Island University Mariners for the 2014 PACWEST season.

The reason? Blasco’s English wasn’t up to what was needed for him to be able take courses at SFU. VIU offered an English as a second language speaking course to help foreign students understand and learn the language better. When you speak with him now, his English is pretty much impeccable. Some would say it’s better than mine!

Coming over to a new country, especially on your own, can be a daunting enough experience. To do so when your grasp of the native language “wasn’t very good” must have been even more so. As tough as it was, he’s loved his time in Canada so far and all the new experiences that it’s brought him.

“It was pretty hard at first, but at the same time it was pretty exciting for me,” Blasco said. “The opportunity to come here and learn another language kind of opened my mind to another culture, new people and an absolutely different environment. Everything that has happened here has been positive to me.

“It was tough, of course, to learn a new language and stuff, but I think I fit pretty well here.”

And for a lad born and raised in the hot Mediterranean climate of Spain, even the infamous BC weather doesn’t phase him. Well, at least not too much.

“Actually, it’s pretty nice weather,” Blasco said with a smile. “I like it. It rains too much for me, but I’m getting used to it! It’s not better or worse than Spain, it’s just different, but I love it.”

It’s pretty clear that Blasco not only feels right at home already in British Columbia, but he’s settled in immediately to the Canadian football scene.

It was almost a dream rookie season for the winger with VIU Mariners. All that was missing was a Championship at the end of it.

Blasco won PACWEST Player of the Year and Rookie of the Year honours, as the number one seeded Mariners lost out on penalties to Douglas College in the PACWEST Championship game. Blasco scored in both the semi final and final. Two of his 12 goals from his 13 appearances with VIU.

Despite the loss, VIU headed east for the CCAA Nationals, where they again lost out in the Championship game on penalties, this time to Sheridan Bruins, with Blasco scoring a couple in the final, including the game tying goal when injured.

Not really surprising that a player who was with the Barcelona youth academy for eight years up to U16 level would handle the demands posed by being in a new country and do well at CCAA college level.

And whatever his footballing future holds in store, the winger has great memories of his time with Barca.

“I was there from when I was 8 to 15 years old,” Blasco said. “It was a pretty nice moment in my life. I learned a lot. I was with very good players and everything that happened there was incredible. Absolutely exciting.”

But now it’s all about the Whitecaps for the young Spaniard and using what he’s learned along the way to excel in USL. But as he tries to impress in his latest new surroundings, those surroundings are already impressing him.

“It actually surprised me a lot because I didn’t really know how it worked here,” Blasco admitted. “We have very, very professional staff. We have a very good environment here and it seems really really professional. It’s actually incredible. I think we have a good, exciting team.”

As for what Blasco can offer WFC2, his goals and performances at VIU have given some indication, but how would he describe his own game?

“I like to play on the wings,” Blasco said. “Both wings works for me. I usually play on the left, but now I’m playing more on the right. I think I am a very attacking player. I try to dribble, I try to create attacking chances, score goals, provide goals too. My type of play is speed playing. Dribble, shoot, attacking player.” 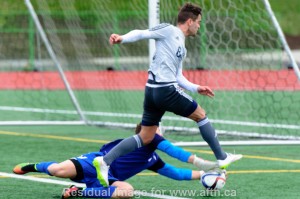 The original loan deal between SFU and VIU was for one year. With Blasco signing a pro deal with the ‘Caps, the Clan and NCAA are no longer an option for the Spaniard moving forward.

While some college players like Chris Serban will be looking to continue his studies and play for both WFC2 and the UBC Thunderbirds, Blasco’s focus is firmly on the footballing side for now. His target – playing in MLS with the Whitecaps.

And the man who brought him over to Vancouver to begin with believes he has what it takes to get there.

“If you watch him in a training session, you’ll see within five minutes,” WFC2 coach Koch told AFTN when we asked him what it was about Blasco that made him want to sign him twice now.

“He’s energetic, he’s passionate, he’s great on the ball. He’s very, very creative. A very likeable guy. He wants to learn, he wants to get better. He’s got a lot of those intangibles that kids in Spain that grew up around a ball all the time, around the game, have. He understands his position.

“I’m looking forward to pushing him because he’s got a lot of talent. Just like all the players in our team, but the sky’s the limit for him. The better he does here, obviously the better chances for him to move further in the game.”