Day two of the Cascadia Summit got underway at the Starfire Sports Complex in Tukwila, Washington this afternoon.

The three day event kicked off last night when Portland Timbers defeated Seattle Sounders 2-0 in a lively encounter both on and off the field.

Two forums were held at lunchtime today, before a sparse crowd at the stadium, in the build up to the Vancouver-Portland game at 4pm.

Supporters’ group representatives kicked off the proceedings in a forum conducted by Seattle broadcaster Arlo White. 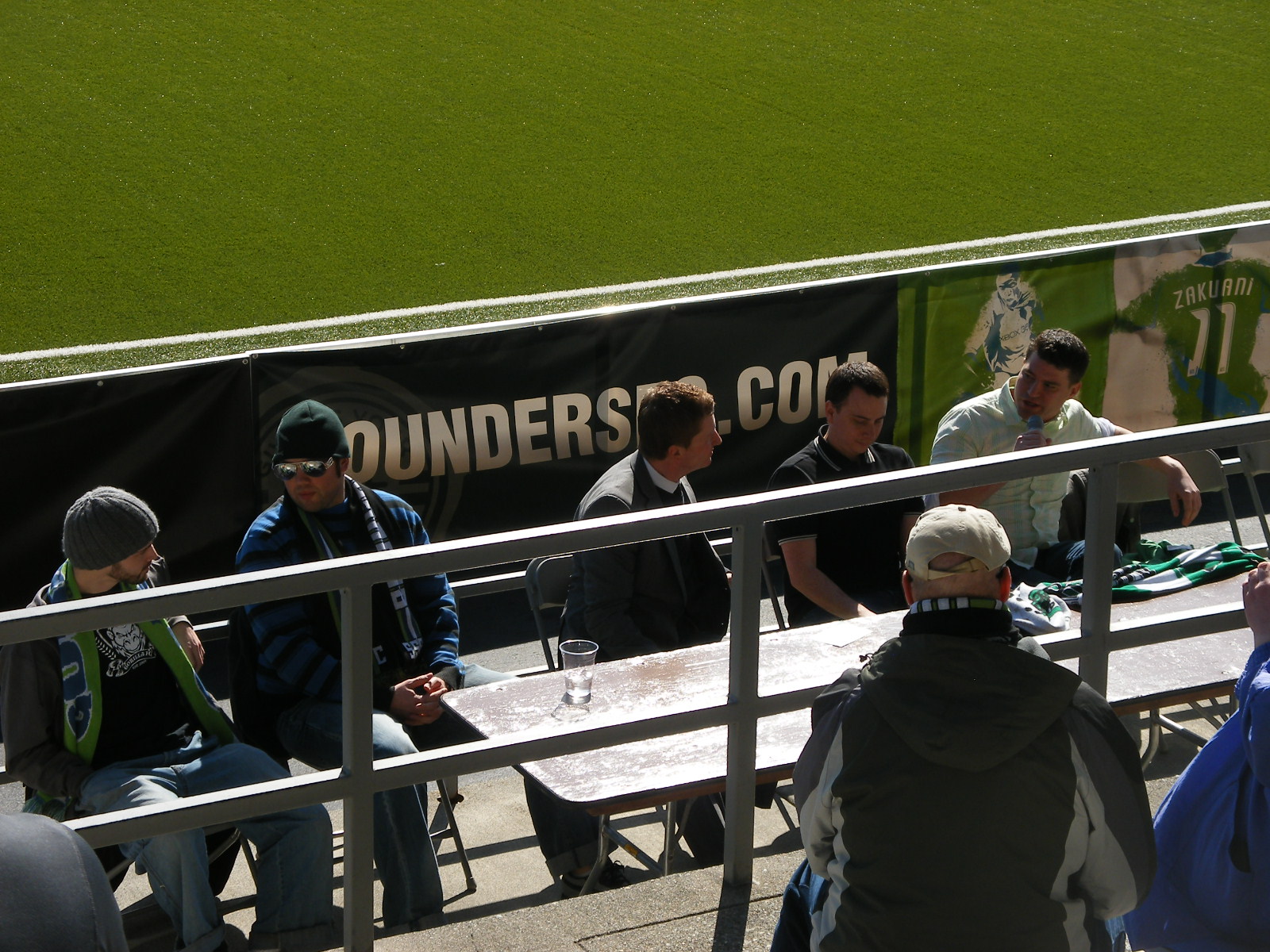 A three hour border delay meant that John Knox and Brett Graham were unable to make the event for the Vancouver Southsiders and it was left to two members of the Timbers Army and two from the ECS to share their thoughts on a number of issues.

A number of important topics were covered and although there was no real groundbreaking news for anyone with a close involvement in any of the three groups, it was a worthy endeavour.

Travel was one of the issues discussed, with the large influx of fans now expected to be making the journey up and down the I5 on a regular basis. Buses are expected to be the main option for a number of fans, especially for those who will be taking the TA’s allocation of 500 tickets to the games.

In the open floor session later on, AFTN Canada raised the important issue of the border and whether fans will be better travelling up the day before the games.

In light of today’s events for the Southsiders bus, this could be a very big issue and potential problem for those of us making the cross country trips.

The TA representatives indicated that their ideal plan would be to not travel up on the day of the game. With most of the major delays coming in the southwards journey, this may be the best option for Vancouver fans planning on making the trips as well. I travelled down to Tukwila late last night and even then I had a 40 minute crossing.

The TA also indicated that they are actively looking into being able to use some kind of express crossing which truckers may use. The ECS guys explained that Amtrak is definitely not an option, so our dream of UK-style “football specials” is sadly a non starter.

Fan behaviour and self policing at matches were also discussed. With some still fearing crowd trouble, there is little doubt that all the eyes of the media will be on the Cascadia matches waiting for something to happen.

We don’t expect this to be a problem with Vancouver supporters. Right now as I type this, both sets of fans are enjoying pre-match pints. Seattle and Portland may be a whole different ball game. There’s real hate there. I love that. It’s what the game needs. It just needs to be kept under control.

Smoke bombs were set off after the goals last night and that will no doubt be discussed at length. Supporters logistics were being discussed in a closed door meeting before the game this afternoon.

Other topics covered were the history of the teams, going back to NASL times, and what the Cascadia rivalry will bring to MLS.

The importance of the Cascadia Cup was also discussed, looking at how it has been presented in the past and going forward. The Timbers fans hope they won’t have to hand it over but as Arlo White pointed out, winning it with just two teams and winning it with three are two different prospects.

The state of the Cup right now is a little battered, with the TA breaking off one of the handles. Should we get it fixed or go with the battered look and the stories it can tell? I go with the latter.

How fans plan their lives around the schedule was mentioned. It’s still an alien concept to many here, but I’ve spent nearly 30 years living my around football and it’s not going to change any time soon! It’s always good to hear you’re not alone!

Inter-group rivalry was an interesting topic. The ECS have Gorilla FC as rivals in the stadium. We don’t know what Vancouver will bring apart from the Southsiders. The Timbers Army only have themselves but important sub groups such as the excellent 107ist.

The Independent Supporters Trust is another alien concept in North America. It’s huge in the UK and I helped to set up the one at East Fife. We now have a trust member as a full Director on the Board. Trusts are taken more seriously than supporters groups and can definitely be the main pressure group for fans wanting change. Part Club ownership though is sadly never going to happen here. We can dream though.

Every group is now glad that we have the other two to direct our hate at though. During the game and on message boards only of course!

The inevitable subject of ticket allocation was brought up. Portland Timbers majority owner, Merritt Paulson, was in the watching audience and stated that he could “unequivocally state” that there is a feeling with all three clubs that away supporters are “absolutely vital”. He confirmed that it ”wasn’t an easy process” to settle on the numbers of away fans at the Cascadia games and that this first year is a trial with ”nothing written in stone”.

Will this Summit be an annual event? No one is sure yet. If it is it needs to be held on a rotational basis. It was originally planned as a big thing to welcome all three teams into the MLS.

Going forward, it would be great. If you want Vancouver fans to be a part of it then it is vitally important to take into account border travel times. Noon starts don’t do this and it was a shame that Vancouver’s voices had to miss out.

We’ll report on the Coaches forum and the Caps-Timbers game later.