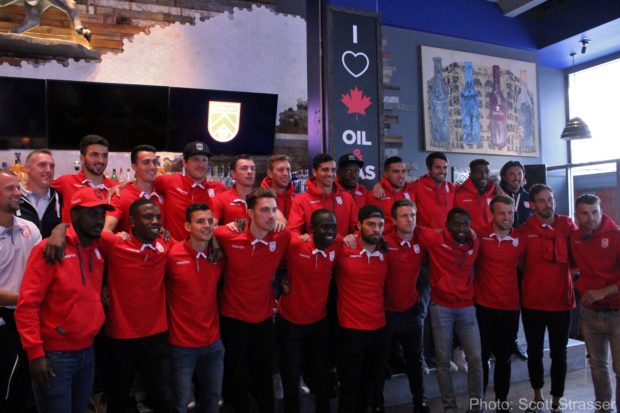 After nearly two months of preseason training, Cavalry FC revealed their official roster for the 2019 Canadian Premier League (CPL) season on April 24, at the Barcelona Tavern in downtown Calgary.

The roster includes 23 players, who are named alongside their jersey numbers and positions below.

“I feel good about it,” said defender Joel Waterman of the inaugural roster. “Tommy is building a culture and he wants to put character first. He’s got the guys to do that, and they’re also talented on the pitch too, so he’s got the best of both worlds.

“We’ll see next week how it unfolds. But on paper, I feel really good about it. Lots of good talent, and I’m looking forward to it.”

Now that Cavalry fans officially know whose names they’ll be chanting at Meadows on the Green this season, here are some takeaways from the inaugural roster. 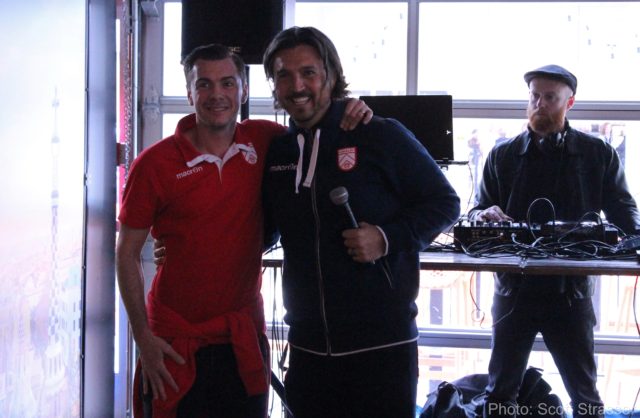 (1) Carducci takes the number one jersey

Watching Cavalry FC preseason sessions, it was difficult to tell who was going to snag the role of starting goalkeeper between Marco Carducci and Niko Giantsopoulos. Both keepers performed well throughout preseason, and neither conceded any goals during the team’s five preseason fixtures.

But in the end, it appears Wheeldon Jr. and co. will go with Carducci as the starting goalkeeper, as the 22-year-old Calgarian takes the number one jersey.

That said, Wheeldon Jr. was quick to point out that nothing is set in stone, at least yet, when it comes to who will stand between the pipes.

“[Carducci] was our number-one last year in the PDL,” he said. “It’s a number that I think fits for him. He’s making a statement. It doesn’t mean he’s guaranteed [the starting spot]. Niko is a quality goalkeeper and is going to challenge him for it. But the opportunity is there for Marco to stake his permanent claim to it.”

“As a goalkeeper, that’s obviously a significant number,” he said. “At the end of the day for me, it’s going to come down to performance on the field. Wearing number one obviously has some significance. I’m proud to have it and I’ll do my best to do that number proud.” 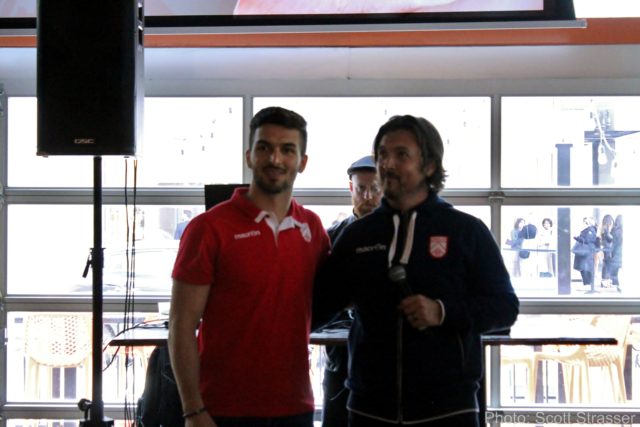 Marco Carducci appears to be the club’s starting goalkeeper, after being given the #1 squad number

A definite blow to Cavalry FC’s back four was dealt during the team’s preseason clash with FC Edmonton on March 30, when Chris Serban went out injured. The injury meant he missed out on the club’s preseason trip to the Dominican.

This week, Wheeldon Jr. confirmed that Serban had suffered what appears to be a season-ending knee injury.

“We’re still waiting to get results back, but unfortunately, our hunch is that he’s going to miss the season,” he said.

Missing the inaugural CPL campaign due to a knee injury will be a huge case of “fuck, not again,” for Serban, who was out injured for several months with a torn meniscus in 2017-18. That injury resulted in him missing the early portion of Foothills FC U23’s successful 2018 PDL championship season.

Serban is a versatile defender, and from what I could tell, he was likely going to start at either right or left back for Cavalry. While his omission from the squad will be a blow to the team’s back four, midfielder Malyk Hamilton said the rest of the squad will be ready to step up in his absence.

“Tommy signed a bunch of great players – every single one of us is capable of doing a job,” he said. “It’s very unfortunate for Chris. He’s a great player and great to have in the locker room.

“[Like Tommy said], he’s an honest player and gives 100 per cent all the time. But we have guys willing to step up if called upon and everyone is capable of getting the job done.”

Another Cavalry teammate who said it was tough to see Serban injured again was Carducci. The two grew up playing for the same youth teams in Calgary and both went west to join the Vancouver Whitecaps Residency program as teenagers.

“He’s a warrior and the type of guy that doesn’t go down easily,” Carducci said. “When he did go down, it was a non-contact thing, so just pure misfortune. It was tough to see that.

“When we were in the Dominican, we got the news that he was going to need surgery and get some repairs. It’s a blow. It’s difficult for us, but I know Serbs will come back stronger.” 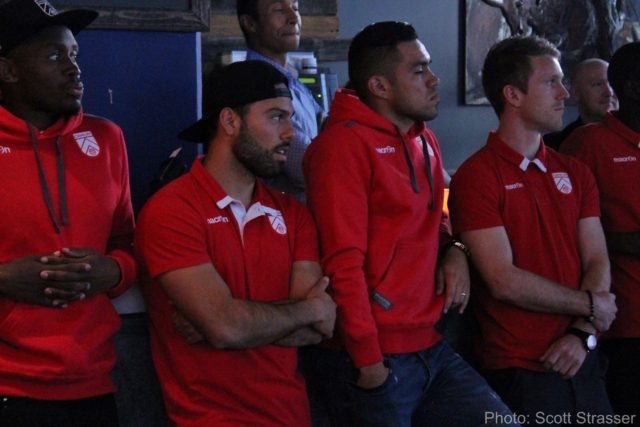 (3) Bitar chosen ahead of Ongaro

The last player to officially be signed by Cavalry for the 2019 season was USPORTS number one draft pick Gabriel Bitar, whose signing was revealed by the club in a press release shortly before the event at Barcelona Tavern.

Bitar, a forward, was a key player for the Carleton University Ravens in USPORTS. He will be Cavalry’s third mandatory U21 player, alongside Victor Loturi and Malyk Hamilton.

Last Saturday, Wheeldon Jr. said the final U21 spot would be contested between Bitar and Ongaro, so it looks like Bitar, who was with the team in the Dominican, won that battle.

“We liked both of them,” Wheeldon Jr. said. “Easton could play in this league. I just think he’s growing into his body. He’s a big lad and I think now, he has to play into his body.

“I thought a season in the USL2 would have done wonders for him, and another year in USPORTS with the U of A, he would have done great, and he’d be ready for the pros. That said, I still think he could play in the CPL.”

Bitar was also not at the roster reveal, as he is still completing his final exams in Ottawa. He will fly to Cavalry when those are completed.

“Gabby has a spark,” Wheeldon Jr. said. “He has this fire inside of him, as well as game-changing ability, and I think he’s ready.” 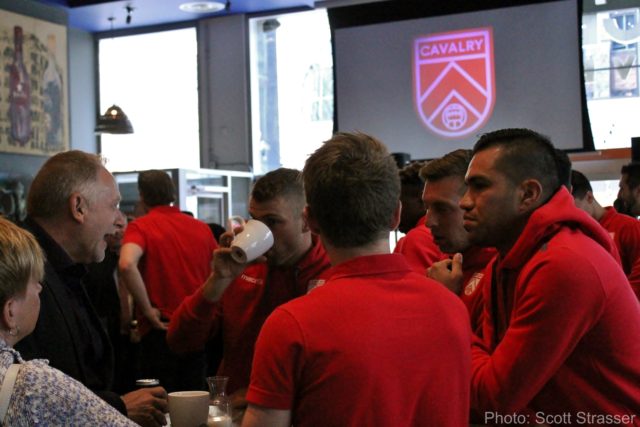 German signing Julian Buescher sips some “Kaffee” (oder Tee, vielleicht) while speaking to some fans, while the Cavalry players await the roster reveal at Barcelona Tavern

A handful of players who were training with the team throughout preseason but did not crack Cavalry’s roster include Sheffield United academy product and former Orlando City B player Danny Deakin, Foothills FC U23 alumnus Tofa Fakunle, and Calgary product Dane Domic.

“They’re all good players,” Wheeldon Jr. said. “I think Danny Deakin is joining a U.S. club now. He wanted to come into the midfield, while we saw him more of a wide player, a fullback. We found we had players in the position he was competing for.”

It appears Fakunle has rejoined the Foothills FC team for the upcoming USL2 season, and has already registered a goal during the U23 team’s preseason trip to Washington State. He will likely play a very key role for that team as the squad prepares to rebuild and defend their 2018 championship.

Domic, a 20-year-old Calgarian, is another who could feature in USL2, according to Wheeldon Jr.

“Dane Domic is still young,” Wheeldon Jr. said. “He has ability. He’s been away from the game a bit too long, so he needs to get some competitive games. He has the opportunity to go and do that with Foothills.”

Cavalry FC will play one final preseason game before their season officially kicks off against York9 FC on May 4. The team will head to the pitch April 27 to play against Foothills FC U23. That game will be played at Meadows on the Green, which owner Ian Allison hinted at the roster reveal will be called ATCO Field. Kick off is at 3 p.m.