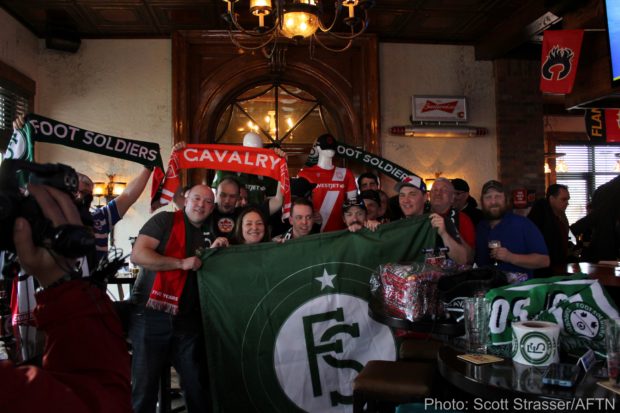 Dozens of Cavalry FC fans packed into Kildares Ale House in south Calgary on April 4 to catch a first glimpse of their team’s home and away kits.

As pints and appetizers were consumed, less than a kilometre away from Cavalry’s home stadium – Meadows on the Green at Spruce Meadows – fans watched a livestream of a Canadian Premier League fashion show in Toronto, where players from all seven competing teams revealed the inaugural jerseys, as well as training wear.

Fans cheered as the players emerged, donning their respective jerseys and walking the catwalk as well as some of New York City’s finest models.

(Perhaps not quite as well, but you get the picture).

Cavalry’s home kit features a red jersey with a white diagonal slash, along with black shorts and socks. According to a press release from the club, the look is inspired by Lord Strathcona’s Horse (Royal Canadians) regiment uniform. 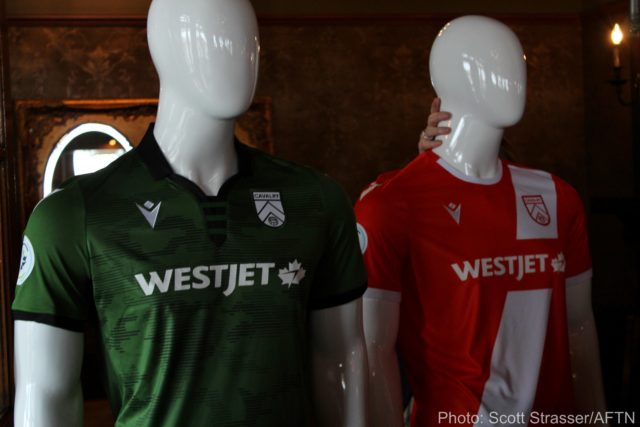 The red is also a testament to Calgary’s sporting culture, as the city’s other professional sports teams – the Flames, the Stampeders, and the Roughnecks – all don the colour as well.

The away kit differs entirely from the home kit, however, featuring white shorts and a camouflage green jersey that boasts a similar shade to Canadian Forces uniforms.

Both kits also feature a C-shaped horseshoe on the lower back.

The main jersey sponsor for Cavalry FC is Calgary-based airline WestJet, who announced their pleasure at being the kit sponsor on Twitter.

We’re always proud to show our support for the home team. We’re also proud to be the official kit sponsor for @CPLCavalryFC. Look forward to cheering the team on from the stands and in the air! #CanPL #CavsFC pic.twitter.com/Xw5fyomwak 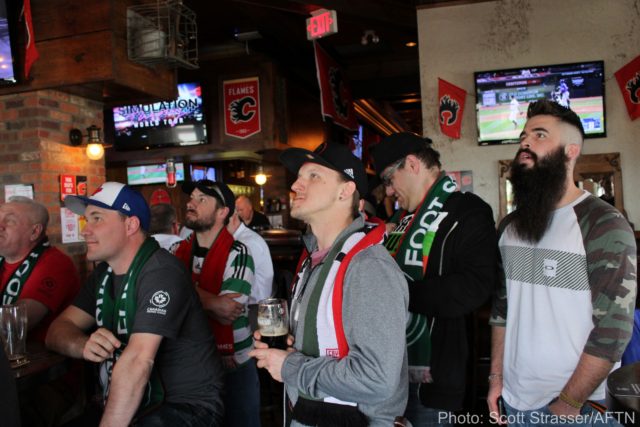 Among the many fans who attended the kit reveal viewing party at Kildares was Foot Soldiers SG member Richard Lewis. He said he liked both Cavalry’s home and away kits, adding he’ll probably end up purchasing both.

“I’m just stoked on the new season,” he said. “I’m a Calgary boy, I’ve always loved soccer over the other sports. I won’t name any, but I’m pretty sure everyone knows what I’m talking about. Foot Soldiers is a pretty unique community, and I was excited to see the jersey and what I’ll be wearing.”

Also in attendance at the kit reveal party were five members of the South City Squadron, who most likely had the longest drive of anyone at Kildares. Coming up from Lethbridge, SCS organizer Sam Epp echoed Lewis’ comments.

“I think Cavalry’s kits are good,” he said. “The home kit goes with the classics. It’s not a straight red kit, which I was worried about. I like the sash, with the white. It changes it up a little bit.”

Epp said he enjoyed the manner in which the CPL decided to unveil the kits, opting to reveal them with a live-streamed fashion show.

“Obviously, this league is about being coast to coast,” he said. “In my opinion, at least until the first ball is kicked, every team is equal. Every city with a team in it should have the opportunity to see their team’s kit as it’s launched.”

Yet another attendee was Ryan Christoffersen, one of the founding members of the Foot Soldiers SG in 2015. He said the kit reveal party was a league-wide success.

“Everything to do with the kit right now is all about getting it to feel ‘real’,” he said. “For this to be the experience we’re getting – to have a kit reveal party at Kildares, so close to Spruce Meadows… the green kit is fantastic. The red kit is great too. I’m going to have to get them both.”

Along with the livestream, attendees also got to see the kits on mannequins, as well as some new supporter-created artwork that features Cavalry FC head coach/general manager Tommy Wheeldon Jr. 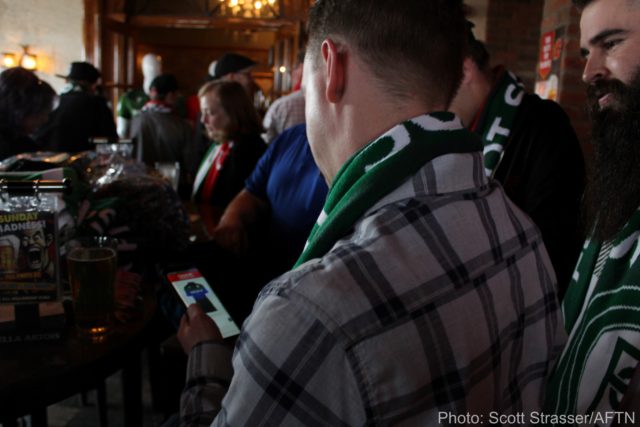 Earlier in the day, Cavalry’s home kit had been leaked online. But attendees at Kildares claimed they tried to avoid seeing it prior to the viewing party.

“Adam from the Young Gaffers podcast messaged me and said, ‘Hey, Cavalry leaked their kit’,” Epp said. “I was like, ‘don’t show me!’ I turned off all my soccer social media, because I wanted to make sure I drove three hours to be here for a reason. I wasn’t going to let a leak ruin that.”

Like Epp, Christoffersen said he didn’t go looking for the image of the leaked kit either.

“Luckily, Sean Clarke [from the Foot Soldiers SG] pointed that out to me, so I was able to avoid it,” he said. “I came here intentionally trying to avoid it. Luckily I did.” 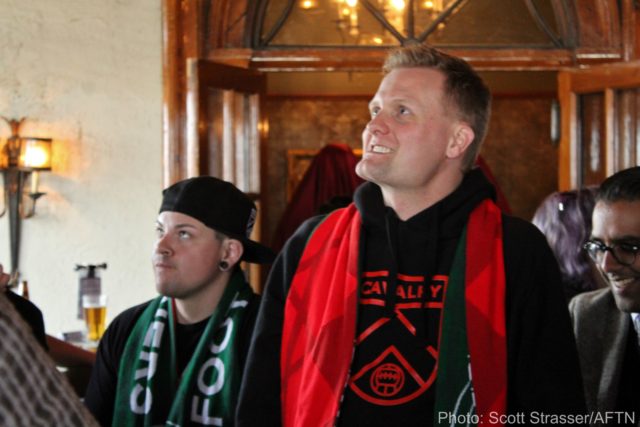