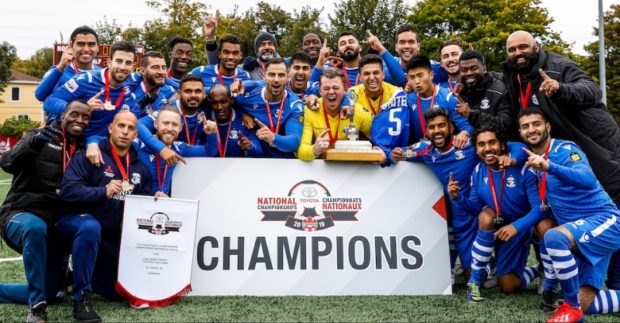 The Challenge Trophy is remaining in BC for another year after Provincial champs CCB LFC United put in a dominant performance to beat Ontario representatives Ottawa St Anthony SC in Monday’s final in St John’s, Newfoundland.

There may have only been two goals in it in the end but CCB dominated from start to finish, with second half goals from Caleb Clarke and Milad Mehrabi seeing the Surrey side keep the famous old trophy in British Columbia after last year’s success from BCT Rovers Hurricanes.

CCB had reached the final after a strong week that saw them play four matches in four days, and coming away with three wins and a draw to top Group A.

They began their week with a 2-1 win over Winnipeg Lions on Wednesday, fighting back from one down to tie things up from Mehrabi in the 64th minute, and grabbing a dramatic last minute winner from Clarke. Mehrabi was playing as a guest player, along with Yassin Essa, after moving on to play for Shaheen in VMSL Division 2 this season after winning the provincial title with CCB in May.

Next up was local side Holy Cross FC on Thursday and another 2-1 victory thanks to a first half goal from Mehrabi and a second half effort from Boris Si, only giving up a last minute goal to the Newfoundlanders.

Friday was more comfortable as goals from Mehrabi, Clarke, and Milad Rahmati had CCB three up, before a stoppage time own goal sealed a 4-0 victory.

They just needed to avoid defeat in Saturday’s finale to clinch their spot in the Monday’s Challenge Trophy final and Caleb Clarke’s 71st minute opener was enough to secure a 1-1 draw with Edmonton Scottish SC.

That set up a tough final against Ontario’s representatives Ottawa St Anthony SC, who won group B with four straight wins and without giving up a goal. 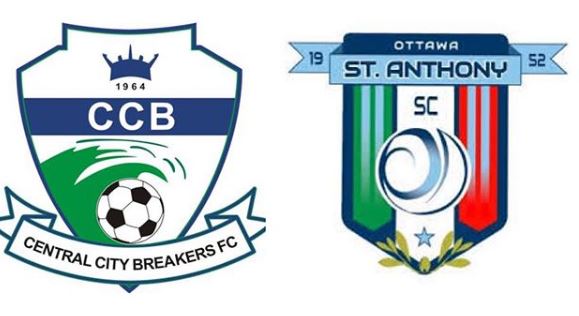 CCB knew they’d been in for a tough afternoon breaking down that Ottawa defence, but with the wind at their backs they took the game to the Ontario side from the first whistle.

Clarke had a great chance to put CCB ahead 19 minutes in when he raced in on goal but pulled his shot past the far post.

Mamadi Camara forced the Ottawa keeper to tip the ball over from under his crossbar with a dipping header from a corner, then Mehrabi was played in but blocked, as the BC boys dominated possession and hardly allowed the Ontario side in the game.

CCB had another fantastic opportunity to go ahead in the 37th minute when some good work from Yassin Essa played in Milad Mehrabi, who was quickly closed down by Gibson.

Ottawa had been kept at bay for most of the half, but with three minutes left they had their best chance so far as Ibrahim Soukary was played in but his shot was blocked.

Goalless at the half, the question now was how much the wind had helped CCB dominate the match in that first 45 minutes. Would they be under the cosh in the second? Well we got an indication 30 seconds in when Mehrabi pounced on some sloppy defensive play at the edge of the box to nick the ball away but his shot was saved once again.

The breakthrough finally came for the Surrey side in the 65th minute.

Yassin Essa whipped in a ball from the right to Mehrabi at the back of the box, who directed it to Clarke, who made no mistake from six yards out. 1-0 CCB. 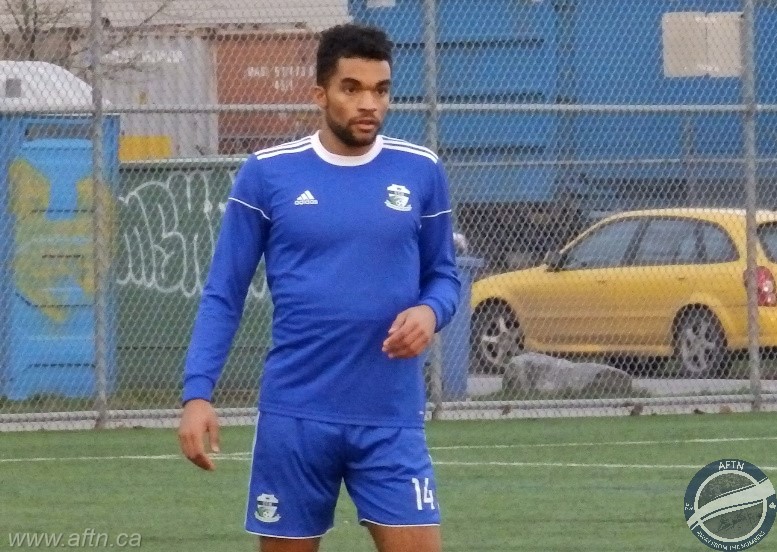 The goal lit a spark in St Anthony, who had their best spell of the match as they tried to get themselves back in the game.

Marco Natoli had a shot blocked in the 72nd minute as he was in on goal. It looked like Shamir Lubenga would pop in the rebound for the equaliser, but CCB’s Nicolas Morello was able to get in a last ditch leg to scramble the ball around the post.

As the minutes ticked down and the Ottawa side were desperately trying to find the tying goal, CCB keeper Luke O’Shea produced a fantastic save to keep out a Natoli free kick in the 87th minute.

St Anthony’s desperateness was to prove to be the final nail in their coffin as keeper Gibson was caught upfield in the last minute on a quick CCB counter as Essa brought the ball out from a corner, allowing Mehrabi to slot home the clincher into an empty net from 40 yards, sparking wild celebrations on the Breakers’ bench.

It was a well deserved victory for CCB, and one that will have surprised some after their struggles to start the new VMSL season, but this is a squad stacked with talent and experience and it showed all week.

CCB now become the 39th Challenge Trophy champions from BC in the competition’s 106 year history. And in a lovely touch, they got Brandon Bassi’s dad to lift the trophy with O’Shea. A tears in the eyes moment for sure and a fitting tribute for the CCB centre back who tragically lost his life in a car accident a week after becoming a Provincial champion in May. His spirit and memory loomed large among the CCB squad this week.

Congrats to all at CCB. Want to relive the action? You can watch the whole match on You Tube.