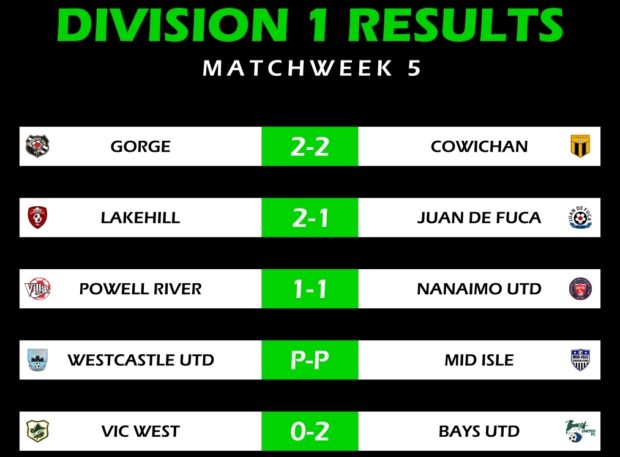 Match-week 5 is complete, most turkey dinners have taken place, and the strange year continues in Division 1 of the Vancouver Island Soccer League (VISL).

Things got off to an interesting start on Friday night as Gorge came back and earned a draw with Cowichan after being down 2-0 with five minutes left. While they salvaged a point, it also means both teams dropped the valuable extra two points with another draw each, and those can come back to haunt you.

Both of Cowichan’s goals by were scored by Blaze Roberts, who is slowly working his way up the goal scoring leaderboard, while Dominic Colantonio and Steven Barnes sealed what was looking like the unlikeliest of comebacks for Gorge.

Friday night also saw Lakehill keep pace at the top by edging out Juan de Fuca All Flows by a score of 2-1 thanks to goals by Blair Sturrock and Keegan Lang. The lone JDF marker was scored by Dane Schoor late in the match to break up the clean sheet.

An early Saturday fixture in Powell River saw Nanaimo in town and they battled with Villa for a 1-1 draw. Andres Algarin continues with his impressive season with another goal for Nanaimo, but scoring later in the match to secure the point for Villa was Grant Campbell.

The final match of the Thanksgiving weekend was also the ‘Game Of The Week’.

Finlayson Turf was the venue as the visiting league leaders Bays United defeated Vic West 2-0. The first Bays goal came from the Golden Boot leading Patrick Nelson, with the second a Vic West own goal late in the game.

Earning the shutout for Bays was Ethan May. Game MVP, earning a nice prize package from 1550’s, TeamSales, and Heineken, was Bays defender Alex Redpath.

And all of that action left the Division 1 standings looking like this: 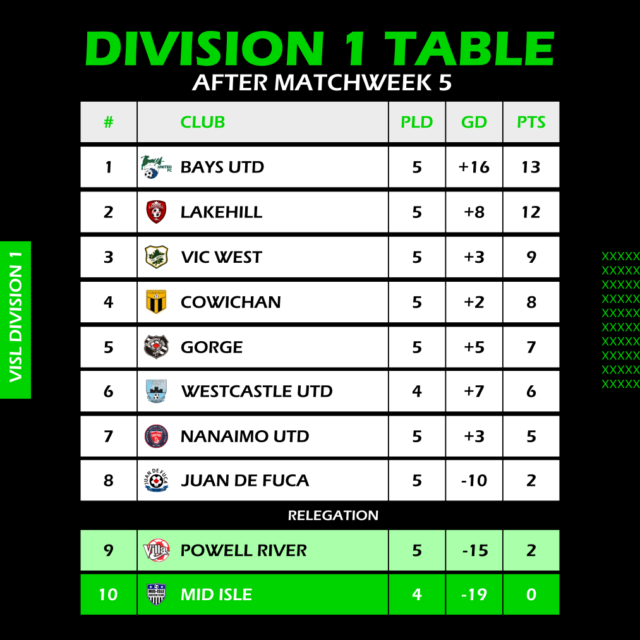 Bays stay atop the division with Lakehill nipping at their heels. The middle of the division is loaded with the teams that have drawn several games, so that should change as the weeks unfold.

The scoring leader board still has Patrick Nelson on top, total goals were a lot lower this past weekend, so things seem to be balancing out a bit…..at least for this week. Here are the top 5 scorers in the race for the Golden Boot. 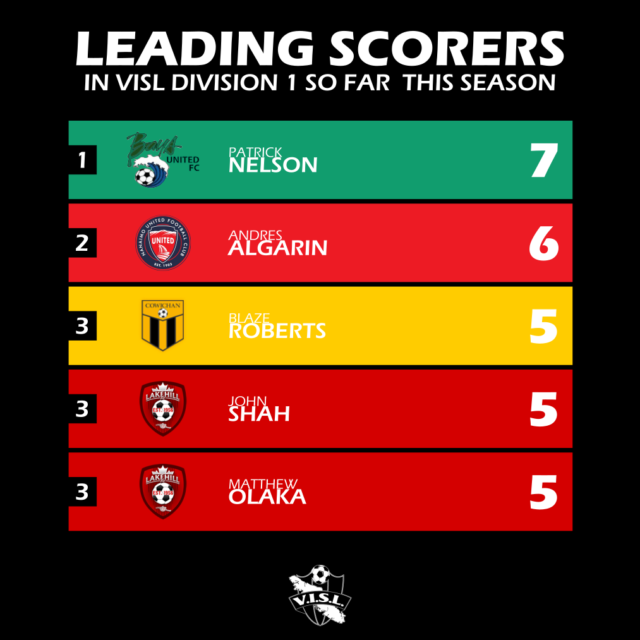 This weekend sees the majority of matches played on Friday night.

And it’s an early start at 7 pm at Hampton Turf with Gorge hosting Vic West. Gorge will be looking for a result other than a draw to go along with their undefeated season to this point. Vic West will look to rebound from their loss to division leaders Bays last week.

Cowichan will also be hosting Nanaimo on Friday night at Sherman Road turf. The bumblebees will look to redeem themselves from last week and take care of their own business instead of tempting fate. Nanaimo has had a less than polished start, and will look to earn some valuable points to draw even with Cowichan in the standings.

The VISL ‘Game of the Week’ is next on the card, with Lakehill hosting Westcastle at Braefoot at 8 pm on Friday night. Lakehill are HOT! Other than their first week loss, they have been on a tear ever since. Westcastle are still undefeated, but they are a game down and have two draws to their record.

This game is a big one for many reasons. Westcastle had last week off by choice with a number of players away, while Lakehill are coming off a win over JDF.

Friday will wrap up with division leaders Bays Utd hosting Juan de Fuca Allflows in Oak Bay. Bays will look to keep their dreamy start going, and will be facing a tough JDF squad who have been in most of their matches even though sitting near the bottom of the table. The Westshore squad pushed Lakehill last week, and will look to elevate their game once again.

The final game of the weekend will feature Mid Isle hosting Powell River on Sunday afternoon. Both teams are at the bottom of the table and will look at this game as a must win to get them out of the relegation zone. This will be a battle as both teams are hungry for those three points.

Here’s where you can catch all the action. 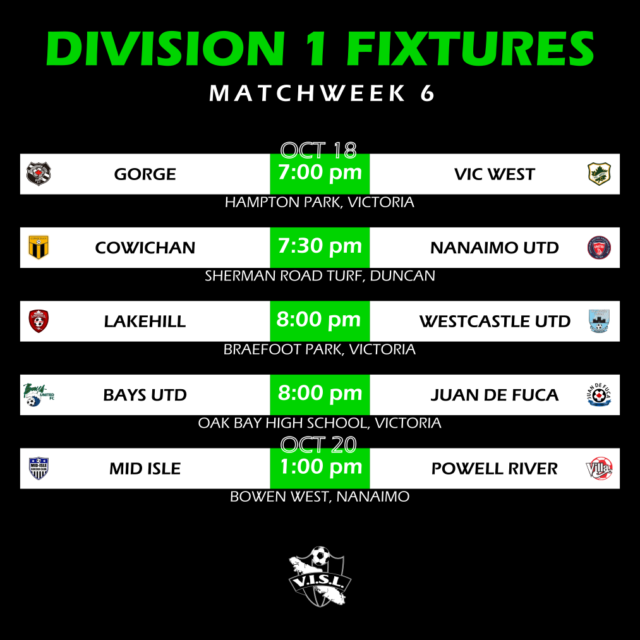 And remember, you can get all the fixtures, results, and standings across all the divisions at VISL.org