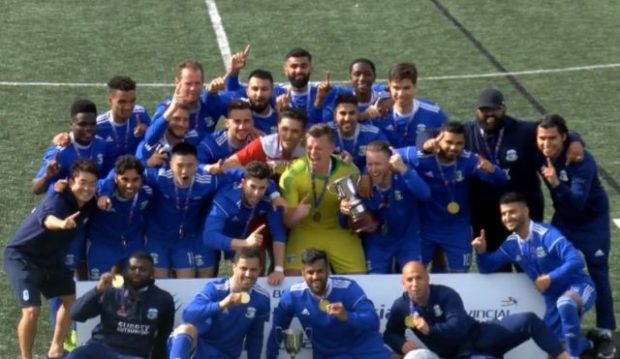 CCB LFC United struck early and often to stun VMSL rivals Rino’s Tigers and lift their first BC Provincial A Cup with a 4-1 victory in Nanaimo on Sunday afternoon.

An impressive offensive blitz by CCB, coupled with as equally disappointing of a defensive display by Rino’s, saw the Surrey side three goals up in the first 15 minutes of Sunday’s final. Rino’s were given some hope just before half time, but it was short lived, with CCB adding a fourth just 19 seconds into the second half.

Shock and awe stuff from CCB and there was no way back for Rino’s after that.

CCB got off to a flyer and had the lead just 69 seconds in when Milad Mehrabi pounced on a loose ball, powered forward, and saw his cross deflected into his own net by Rino’s defender Danylo Smychenko.

A dream start for the Surrey side and it was only to get better.

Mamadi Camara knocked the ball away from Rino’s Jude Barrow in the 14th minute, straight into the path of Caleb Clarke who raced in on goal and finished with aplomb into the far corner, giving Tigers keeper Brandon Watson no chance.

Joy for CCB, and that increased further just 65 seconds later when Boris Si picked up a loose ball and played in Clarke again, for the former Whitecaps striker to coolly tuck home his second and give United a stunning 3-0 lead.

Rino’s were shellshocked but they gave themselves some hope when Kristian Yli-Hietanen headed a Connor Glennon cross past Luke O’Shea to reduce the deficit to two again with four minutes of the half remaining.

That goal looked to have set up a potentially cracking second half, but any hopes of a Rino’s fightback were dashed just 19 seconds after the restart.

San Jose MLS draft pick Camara had been giving the Rino’s defence fits up the wing in the first half and he continued where he left off in the second, tearing up right flank before sending a cross into Robert Giezen, who flashed a first timer past Watson to restore CCB’s three goal lead.

Rino’s had a penalty appeal waved away, but they never looked like springing the dramatic comeback and CCB comfortably saw out the rest of the match to secure a 4-1 victory and claim their first Provincial A Cup.

A fantastic and well deserved victory against an admittedly weakened Rino’s side that was missing some key players to injury and to playing with TSS Rovers on USL League 2 duty. Would they have made a difference? That’s something that can be debated, but on the form shown by CCB on the day, it’s hard to have seen any team stop that firepower.

The victory caps off a fine season for CCB that could have easily seen them win the double. Now they move on to Newfoundland in October to try and keep the Challenge Trophy in BC at the nationals. On form like we’ve seen from them this year, you wouldn’t bet against them.