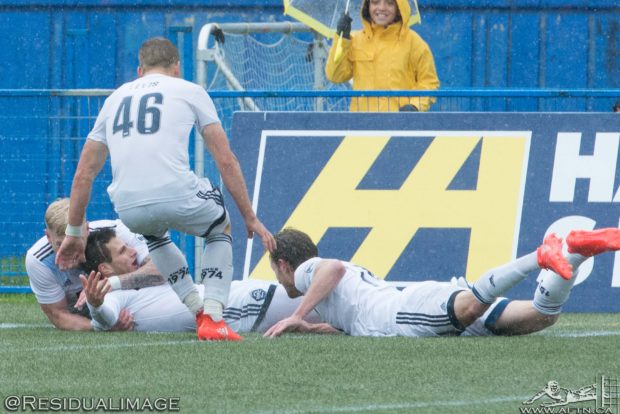 “I don’t think I’ve breathed since Daniel scored the goal, to be honest.”

Those were the first words from WFC2 head coach Alan Koch after watching his side’s dramatic 3-2 victory over OKC Energy in their USL Western Conference semi-final on Saturday afternoon.

I’d asked him how his nerves were that second half, because mine’s were shot sitting up the back of the stand watching all the drama play out.

We can all breathe again now, thanks to Daniel Haber’s fantastic late winner that sends the ‘Caps through to next weekend’s Conference final where they will either host OC Blues or travel to Swope Park Rangers. But let’s rewind a little bit before trying to take in all that.

It was raining droplets and goals up at UBC in a semi-final match up that produced the action we expected.

With very little to choose between the sides all season, you knew this was going to be a close one, and the battling performances put in by both sides deserves a lot of credit. Both teams had the hunger and never say die attitude and you didn’t know where this one was going right up until the referee blew the final whistle.

The ‘Caps were the better team in the first half, and will have been disappointed not to head in with more than a one goal lead. The goal game from a 27th minute Kianz Froese free kick that soared just over everyone as it came into the box, deceiving OCK keeper Cody Laurendi and ending up in the Energy net.

OKC had chances of their own and Spencer Richey was in fine form in the ‘Caps goal.

WFC2 came out quickly in the second half looking to get what they hoped would be the killer second and it came just three minutes in after some great build up play by Kadin Chung to set up captain Kyle Greig, who drilled home his second of the playoffs.

But OKC fought back, launching an aerial bombardment into the Vancouver box. The warning signs were clear, especially when Danni Konig has a goal called back for offside. He wasn’t to be denied though, firing home a shot from a corner at the back of the six yard box on the hour mark.

The visitors pressed hard and the ‘Caps defence was bending but not breaking, with Richey producing a couple of world class saves. But their resistance was finally broken with ten minutes remaining and there was nothing that Richey could do keep out Timo Pitter’s beauty into the top left corner.

Game on, with OKC in the ascendency, but the young ‘Caps regrouped and took the game back to the Energy grabbing the winner a minute from time.

Substitute Thomas Sanner used his frame to full effect to get past his man and send a dangerous ball into the box. It eventually fell to Haber, who showed tremendous composure under pressure to take his time and make room, before firing through two defenders legs and past Laurendi, sparking jubilant scenes on the sideline.

“What an exciting football match,” said a hoarse Koch. “To go 2-0 up where we thought we were in control, you’re never in control when you play a team like that that relies on set pieces. They’re going to be dangerous no matter where they get their opportunity from and give them credit, they took them.

“But we’ve said about our group for a long time now, football’s about characters and having character. In our group, we have character and we have characters. Full credit to Daniel Haber. He’s been brilliant in training. His finishing has been first class and he executed today.” 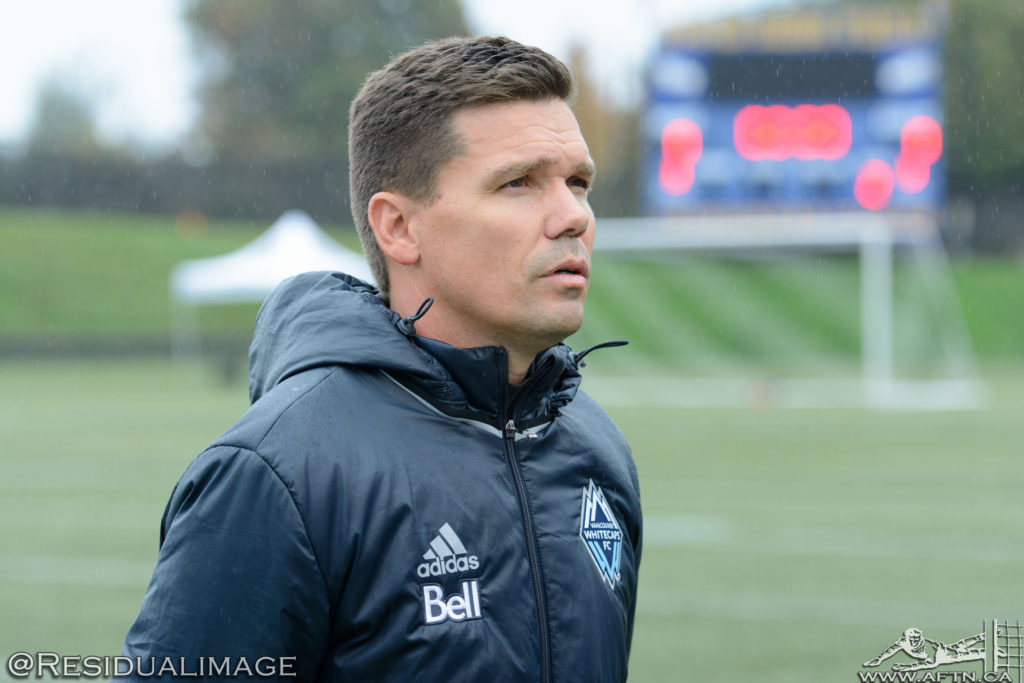 WFC2 games have been exciting affairs for much of the season, but part of that is that the young team haven’t managed to kill off their opposition the way they would have liked, taking early leads but letting the other team get back into the match and setting up tense and often action-packed finishes.

It was the same again today. Some teams would look to be coasting when they go two up, but you were always sitting there waiting for OKC to grab the next goal and then see where the game went.

The Energy did just that, scoring the next two to tie things, up but the resolve and fighting spirit shown by the ‘Caps to not let their heads go down and storm back for the late win, will give an already confident side a further boost as they move to within two wins of a USL Championship.

“You saw the raw emotion on the pitch after we got the result,” Koch said. “The guys will feed off it and grow in confidence. We’ll obviously have to go and watch the video and address a couple of things as we move forward. But that’s part of the development process.

“Our group is young, we know that. We played against a mens’ team essentially today and it showed at times, but our group will continue to grow and we’ll get better. We showed some quality moments today and we showed some moments of naivety today too. If we can focus on the positives and grow, then I think we’ll give ourselves a good chance next week, no matter who we play.”

Haber earned the official ‘Man of the Match’ plaudits for his last ditch heroics, and he had a good game throughout. For us though, without the saves of Spencer Richey, we could be talking about a much different result tonight.

Richey was outstanding all match, commanding of his area and not afraid to put his body on the line, taking a few knocks in the process. He officially made three saves, but it felt more, including a point blank one on an offside call.

“We’ve said it all season long,” Koch agreed. “Spencer’s the goalkeeper that when he plays he gives you the chance to win. He’s going to make the basic saves, but he normally pulls something that you wouldn’t expect him to do and full credit to him. He’s a huge part of our team and a huge part of the success today.”

One player who didn’t feature today was the soon to be 16-year-old (thought we’d change it up a bit!) Alphonso Davies, who picked up a knock midweek that ruled him out.

If the ‘Caps can get him back, along with the returning Marco Bustos, who missed the OKC win due to being away with the Canadian national team, then they’ll be an even bigger force to be reckoned with in next week’s Conference final.

“I joked with the guys and said we don’t need Alphonso,” Koch said with a laugh. “We love Alphonso. He’s a great kid. He’s a great player too. If we can get him for next week then that would be great. He picked up a little bit of an injury at training on Thursday. There’s no point with any player in risking them, particularly a very young prodigy like he is too.”

All eyes will now be on Sunday’s other Western Conference semi-final between the 4th seeded Swope Park Rangers and 8th seeded OC Blues. That game kicks off at 1pm PT, and Vancouver will host next weekend’s Conference final if the Blues can come away with the upset win.

As nice as that would be, WFC2 have shown all season long that they have nothing to fear on the road and can get the job done, and Koch isn’t too fussed who their final opponents will end up being.

“I don’t care where we go, to be honest,” Koch said. “I didn’t really care last week either. It’s nice to play at home, it’s a little bit easier so we don’t have to travel, but I think all the results in the USL, particularly in the Western Conference, it doesn’t matter who you play or where you play, you have to step up and take care of business.”