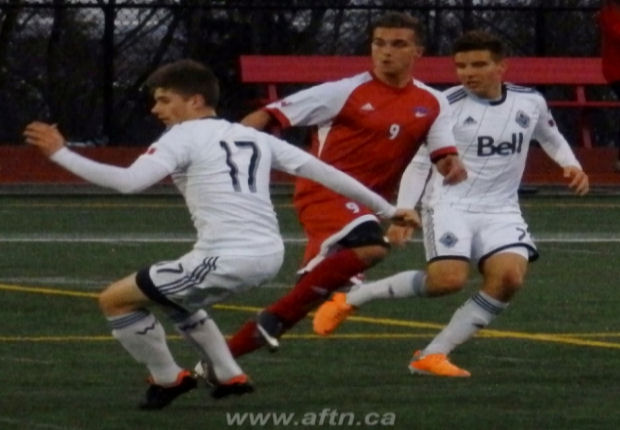 When you look at top college players it’s easy to make the assumption that they’re at their respective schools primarily to play football.

It’s not always the case of course. When we spoke with the Clan’s German midfielder Chris Bargholz last year, we found out that the academic side was what had lured him to SFU, with the footballing side a happy add on.

SFU’s joint top scorer this year, winger Jovan Blagojevic, is another example. The Coquitlam native is currently studying molecular biology biochemistry and looking to go to med school next year, with another four to seven years of academic life ahead of him.

Football is still his passion, but the education side takes precedence. In the meantime, SFU are reaping the benefit of his footballing talents and Blagojevic is having a blast doing it, scoring 10 goals and contributing four assists in his 22 appearances so far this year.

Listed as a Junior, which is usually a third year student, Blagojevic is actually in fifth year up the mountain, choosing to focus on his studies and not soccer during his first two years at SFU.

“My first two years I decided not to play, then I finally talked to my parents about whether I should join or not and how it was going to affect my school, but deciding to choose to play on the team was by far a great experience for me as a player, as a person.” Blagojevic told us when we chatted last week.

“It’s definitely the best thing I’ve done for my career as a soccer player. It was the best decision for me to do, join the team.

“It’s the closest I’ve got to that professional environment, which is nice, and I’ve always wanted that in my life as a soccer player.”

As of now, Blagojevic won’t be playing his senior year at SFU, but that could still change.

“It’s still up for question if I’ll play next year. I’m not sure. It depends. At the moment I’m applying to med school so if I happen to get accepted into med school then I obviously won’t be coming back, but if I don’t get accepted then there’s a possibility of me possibly playing my senior year here.”

With the possibility that this may be his final footballing year at college, Jovan is looking to go out with a bang and bringing home a national title would be some way to bow out of the program.

But this trip to the Final Four means even more to Jovan.

He was unable to play in last year’s historic postseason journey, after picking up a season ending injury after only 12 games of the campaign, doubly agonising as he was really clicking with six goals and four assists.

“It’s special. It’s very special. Last year was sad, I got injured. Luckily I had the coach bring me along for the tournament. I didn’t play. I wasn’t ready, I wasn’t fit. But I got to know what it’s like and I know the feeling of how it felt to lose in that Final Four, even though I wasn’t playing.

“So this year it means a lot, for me and for everybody else too. It’s a big moment for us and we’re all preparing ourselves mentally and physically. Everybody knows what they need to do. It’s exciting.”

As one of those returning players that went through the heartache last year, what can he share with his newer teammates, the rookies that haven’t been down to the final tournament before?

“One time we came out a little slow but luckily we managed to get back from that in the Sweet 16 game. Other than that, every other game we came out super strong and just approached it with the right mentality. One game at a time and that’s exactly what we’re doing right now into the Final Four.

“So if I could say anything to the rookies it would be it’s just like any other game. It has nothing to do with the Final Four, semi finals type of thing.”

In that Sweet 16 game against San Diego, SFU were a goal down with less than four minutes to go and a tournament exit was on the horizon. Then up stepped Blagojevic to bury a Magnus Kristensen cross, taking the game to extra time and penalties, which the Clan eventually won.

When that ball came over, with everything on the line, what was going through Jovan’s head?

“We have such a good system with the long throws. Every single time we have a long throw I know we have an opportunity to score, because Magnus does such a great job of getting to the ball first and flicking it on.

“So as soon as I see that Magnus is going on to the ball I almost know exactly where to position myself to come. As soon as he got the flick I was like, here it is, here it is. I kind of just dropped back and there it was, right in front of my foot and I put it in the back of the net.”

Blagojevic is making a habit of scoring big, important goals for the Clan this year. Apart from that leveller against San Diego, he opened the scoring in the 2-1 overtime win in the second record and grabbed the fifth in the 5-0 rout over Regis in the Elite 8.

He is credited with four game winners this year, with one of the biggest being the overtime goal against Seattle Pacific that won SFU their fourth straight GNAC championship at the start of November (which you can enjoy again below).

So big goals, important goals. Does he have a favourite or one that he would say is the goal that means the most to him in his career so far?

“The GNAC winner was probably the best one I’ve had as a soccer player in my career. That experience and that feeling was amazing. Just to end the game like that and win the GNAC. It was amazing.

“I couldn’t have asked for more. It was like a story. There’s no words to describe it. It was so good. It felt like the longest two seconds of my life watching the ball bounce off one post, to the next post and then just running and being there and putting the ball in the back of the net.

“Obviously the San Diego goal was huge too. It felt good. Had it been the game winner, it may have been the goal of my career, just because it was better, but there was still the possibility that you don’t know what it is. It was nice to give us a chance, but you still couldn’t get the happiness that you got with the other one because you still needed to be mentally focussed to prepare yourself for extra time.”

Jovan is joint scorer for the Clan right now along with Colin Jacques, with his ten goals part of 75 that SFU have battered opponents with this season. Averaging a staggering 3.41 goals per game, 16 different players have found the scoresheet for SFU this season. With a goal threat coming from all over the pitch, they must be so hard to play against.

“Absolutely. Our team has so much depth. If one player comes off there’s no change. It’s the same threat coming at you. It must be hell for the defenders on every other team, cos it’s like ‘they’re subbing’, oh this hasn’t changed anything, it’s still just as dangerous. That’s a big key as to why it’s so successful.”

Last year Carlo Basso led the team with 14 goals and whilst some teams have given him extra attention, often double marking the big striker, the goals are still coming with Basso, Blagojevic, Jacques and Ryan Dhillon sharing 37 goals and 21 assists between them.

“I think this year we’ve changed our game up a little bit more compared to what it was last year, or the last two years.

“There’s always been the important connection between Basso and the attacking mid. This year we’ve focussed a lot on the wingers and attacking through the flanks, as well as set pieces, where a lot of our goals come from.

Blagojevic’s own game gets the benefit of playing additional games with Coquitlam Metro Ford in the VMSL and PCSL after SFU’s short competitive season is over and like Alex Rowley yesterday, he finds it excellent for his continued development as a player.

“Playing in the summer is super rewarding because it gets your confidence up and it gets you built up.

“The best example was my sophomore year. I had a great preseason with Metro Ford. I was leading the goalscoring in the summer league and I came into here super full of confidence and it carried on through, scoring goals. Whilst this year, I was still struggling through that injury in preseason and my confidence wasn’t where it needed to be and that’s why from the beginning of the SFU season it still took me a long, long time to finally get in to it, until I finally broke through that deadlock where I fought off the injury mentally, physically, and then the goals started coming again the way they should.”

As he heads into possibly the final two games of his SFU Clan career, Blagojevic is waiting to hear if he has gotten into medical school. That will mean a lot of schooling still ahead of him, with four years there and a further two to three years afterwards as he looks to specialise.

With his goalscoring exploits and performances turning heads, has he totally written off trying to make a career in the game or would he look at putting his schooling on hold if the right offer came along?

“To let go of something and give it up and not do that, I’d regret it for the rest of my life kind of thing. But at the same time, getting in to med school is so difficult as it is, so if I had to choose between them both I really don’t know what I’d say.

“That would be so difficult because it’s childhood dream against a guaranteed profession .”

If he continues to light it up in the Clan’s postseason run, he may yet find himself having that difficult decision to make.