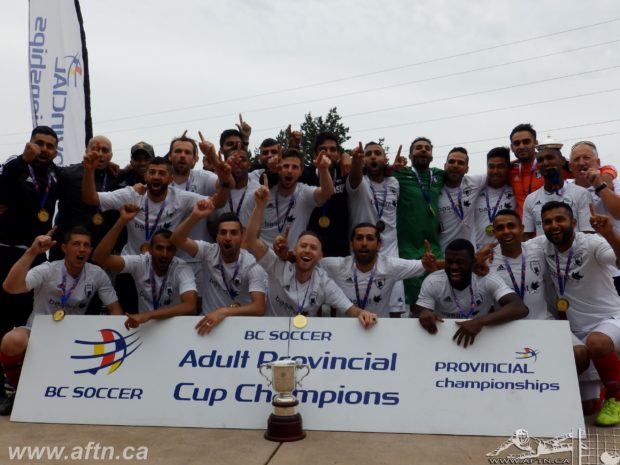 2011 was a year to remember for Pegasus FC. The Surrey based side won the BC Provincial A Cup title before narrowly losing out at the Nationals, going down 2-0 to HUSA Alumni in the Challenge Cup final.

It was a defeat that stung the horsemen. It was also the last time Pegasus lifted BC’s provincial crown.

They’ve had five years to dwell on it, with varying fortunes both on and off the pitch during that time, but now they get a chance to go one better at the Nationals following a stunning come from behind victory that saw them knock off Coquitlam Metro-Ford Wolves 2-1 in Saturday’s BC Provincial A Cup final at Westhills Stadium in Langford, Victoria.

“It was a great win,” an enthused Pegasus manager Robbie Toor told AFTN after the match. “We started a bit slow at the beginning of the game. Once we went down early, we knew we could come back. We’ve been in different situations all year – leading, losing, tied at half – and this group of guys, we battled. It’s one of those things. We knew.

“They’re a great young team. A lot of talent. But for our guys, a lot of experience. We’ve been here before, we’ve been down before, and we knew if we kept battling that we’d open it up and get goals and we were fortunate enough to play well at the end of the game.”

It’s been a great year for this talented Coquitlam side. One which has seen them crowned VMSL Premier and Imperial Cup Champions. They pipped Pegasus to the VMSL title by a single point, but it was the experience of Pegasus that got the job done in the end, but they were made to work hard for it.

Metro-Ford had the better of the league encounters between the two teams and it looked like it might go the same way early on when Coquitlam opened the scoring just eight minutes in.

Carlo Basso broke through the Pegasus defence before hitting the byeline and cutting the ball back to Lucas Krivak to fire home from seven yards out.

Singh was called into action again in the 24th minute keeping out a point blank Basso header from a Krivak free kick, as Coquitlam looked for a killer second.

But Pegasus held firm and started to create some chances of their own.

Javid Khan had a long range shot that went just over in the 34th minute before playing in Whitecaps Residency alumni Mark Baldisimo who sent a dangerous ball across goal that Jagminder Gill just failed to connect with.

With the game two minutes into first half stoppage time, it looked like Gill was about to tie things up when he bore down on goal, but Metro-Ford ‘keeper Dillan Fogliato came up with a big block to deny Pegasus in the last kick of the half and send Coquitlam in with the one goal lead.

Basso had another chance to add to Metro-Ford’s lead seven minutes into the second half, but he pulled his shot wide left when through on goal.

It was starting to feel a bit cagey on the pitch, with chances at a premium, but Pegasus had a great one two minute before the hour mark, which they were unable to take.

Khan hit a fierce low drive on goal from outside the box which Fogliatio could only parry. The rebound fell to Gill but he poked it wide of the right post.

Pegasus came even closer to levelling things up five minutes later when another former Whitecap, Yassin Essa stayed onside on a long ball and rounded the keeper but his shot was cleared away for a corner.

The Pegasus pressure finally paid off in the 69th minute with a beautifully worked goal that started in their own box, played out over 56 seconds and consisted of 17 passes. The move was finished off by Chetan Jhooty, who collected the ball just inside the Metro-Ford box and fired home the equaliser.

It was most definitely game on now and with neither team wanting to make the costly mistake, chances were again few and far between.

But the turning point of the match came ten minutes from time when Baldisimo was sent crashing in the box by Sang Hwang after showing some nice footwork to try and make room for a shot. 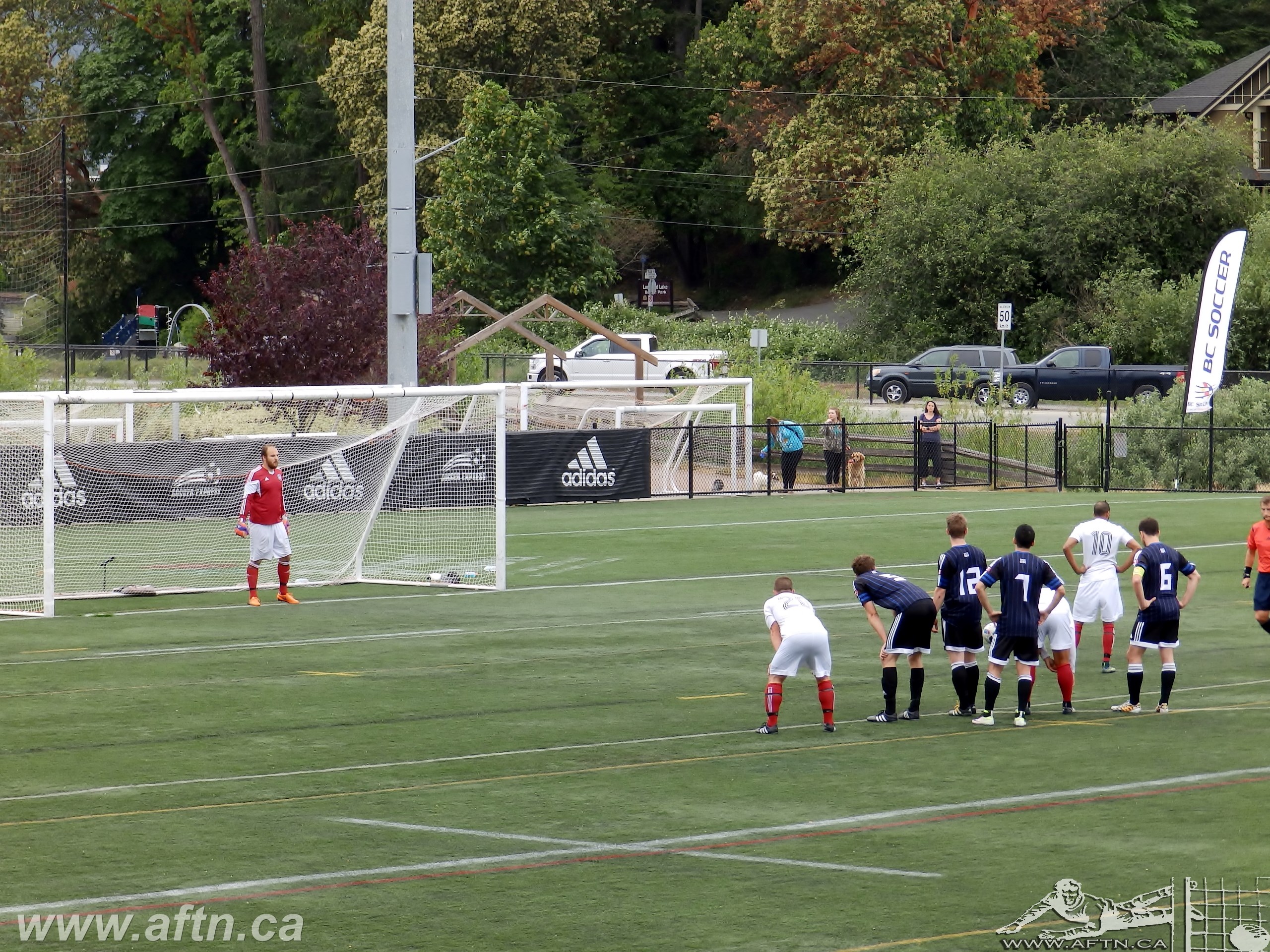 The referee had no hesitation in pointing to the spot and it was up to Jhooty to step up and take the vital penalty, clinically dispatching it for his, and Pegasus’, second of the game.

It was to prove to be the winning goal, with Coquitlam unable to mount a comeback in the remaining time, and Pegasus held on to claim another provincial title.

It was fitting that the winner came from one of the long-time servants on the team in Jhooty. So what was going through his mind when he stepped up to take the crucial spot kick?

“Just got to put it in man,” Jhooty laughed when AFTN caught up with him after the game. “There was too much riding on it. We worked too hard. We had one goal in mind since the beginning of the year. We counted our minutes – 6,480 minutes of training. That’s all it comes down to.

And despite going down to that early goal and being forced to soak up some strong Metro-Ford pressure, Jhooty was never in any doubt that his team could fight back for the victory against the VMSL league and cup double winners.

“It’s from those minutes of training,” Jhooty said. “Your endurance, the training, the work that we put in all year. It doesn’t matter who finishes first in the league and who finishes last, this is what it is. This is a family. That’s all that matters. This is huge. I missed the 2011 Provincials. This is surreal.”

Huge congratulations to Pegasus, who now go on to represent BC at the Nationals when they try and bring home the Challenge Trophy in St John’s, Newfoundland in October.

You can see our video of Pegasus’ winning goal, full time reaction, and their medal and trophy presentations, below:

You can see full coverage of the match, and all of the other weekend’s finals, on the ViaSport Website.

BCSoccerWeb.com were over in Victoria for the weekend and you can see their excellent A Cup game photos HERE. You can also see some of our photos of the (mostly) postgame celebrations from all four of Saturday’s men’s Provincial Cup finals over on our Flickr page HERE and in the slideshow below.