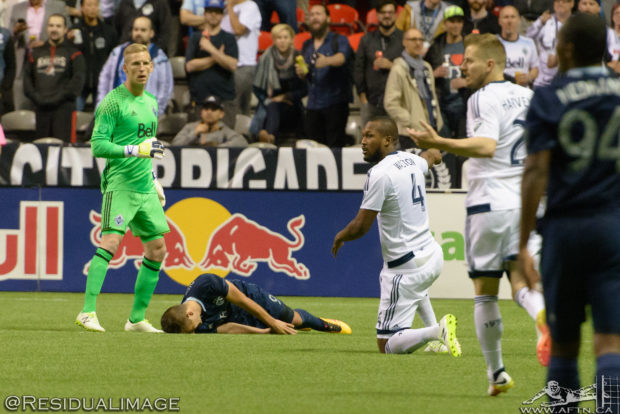 Who are the real Vancouver Whitecaps this season? No-one really knows yet. Not even Carl Robinson. It’s certainly been an up and down season and Wednesday night’s match at home to Sporting Kansas City show both the good and the bad side of the ‘Caps this year.

There was an exciting start, with some dangerous attacking play. A nice goal for Christian Bolaños, his first in MLS. But then some sloppy defending let KC back in it and the ‘Caps served up what Robinson described as a “catalogue of errors” in a second half that saw Kendall Waston sent off in the 51st minute.

So one point is better than none and it came against tough Western Conference, albeit one that rest their three dangerous attackers. Here’s our report and postgame reaction from both locker rooms.

A strong start wasn’t enough for the Whitecaps to get the full three points and in the end a short-handed Vancouver side had to hold on to a 1-1 draw against Sporting Kansas City at BC Place on Wednesday night.

It was a tale of two debut MLS goals, with Christian Bolaños scoring his first as a Cap, while Diego Rubio replied for the visitors.

The home side looked to open the scoring early when Masato Kudo almost converted a Cristian Techera cross, with the ball being slightly deflected by Matt Besler away from the striker.

Ten minutes later the Whitecaps would strike first off a set piece as Techera’s corner found an open Bolaños who side-volleyed his shot past the keeper.

That lead didn’t last long as Sporting drew even before the half hour mark when Rubio collected a shot/pass from Lawrence Olum and beat David Ousted from in close. 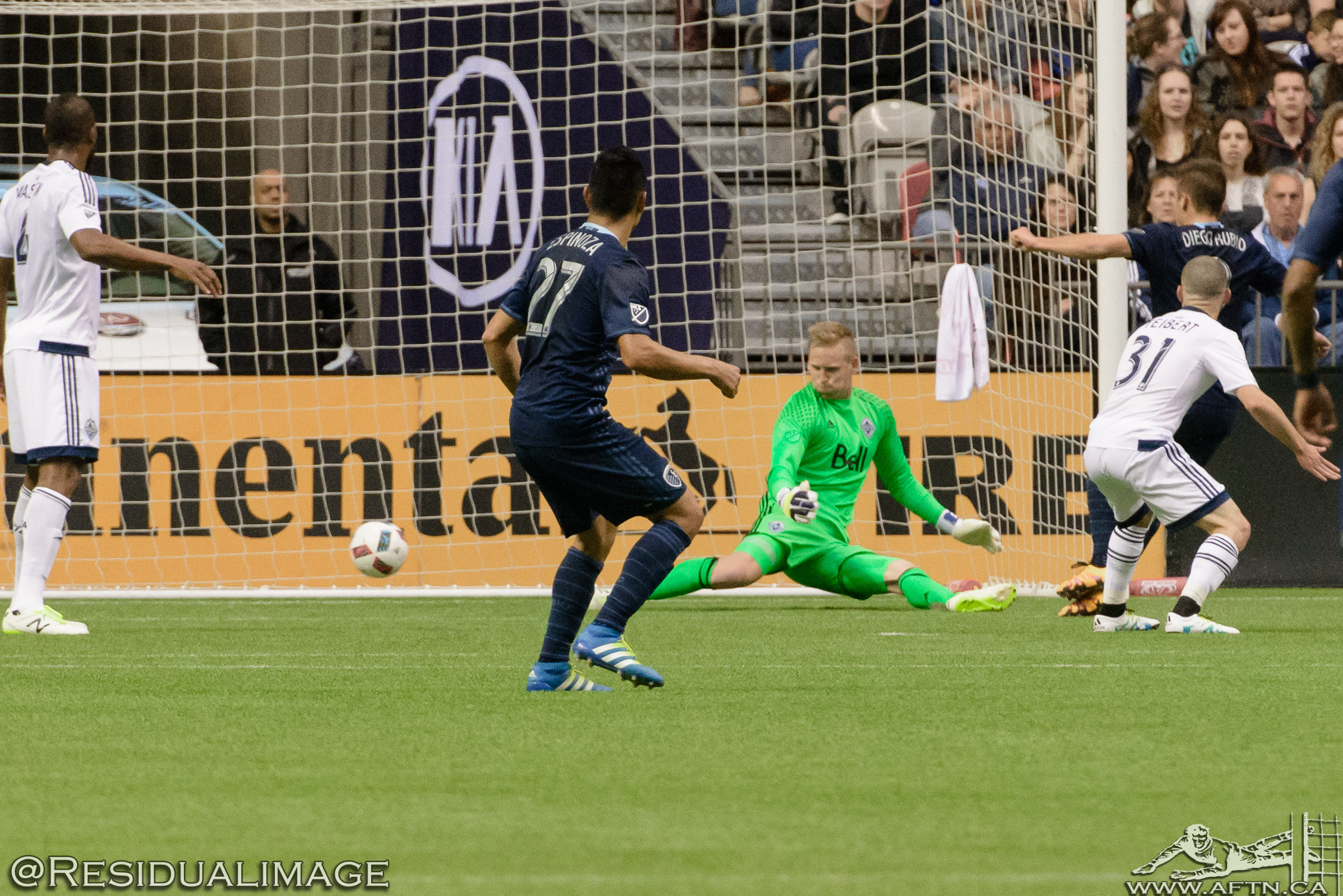 Kansas City almost took the lead only a few minutes later after a poor giveaway by Matias Laba led to an attempt by Olum that was stopped by Ousted and then cleared off the line by Tim Parker before Rubio could get to it.

Kudo got another chance moments later but once again Besler was able to get a foot in and deny the pass from Techera.

The second half couldn’t have started any worse for the Whitecaps, with Kendall Waston getting sent off for a second yellow card in the 51st minute, after a poor back pass from Parker forced the Costa Rican to go in for an awkward challenge that was penalized by the referee.

The remainder of the match saw Sporting Kansas City control the majority of play and look dangerous, but they were unable to create any clear chances and both clubs ended up splitting the points.

Vancouver will only have a few days to regroup with a long trip to the east coast coming up and a match against New York City FC on Saturday. 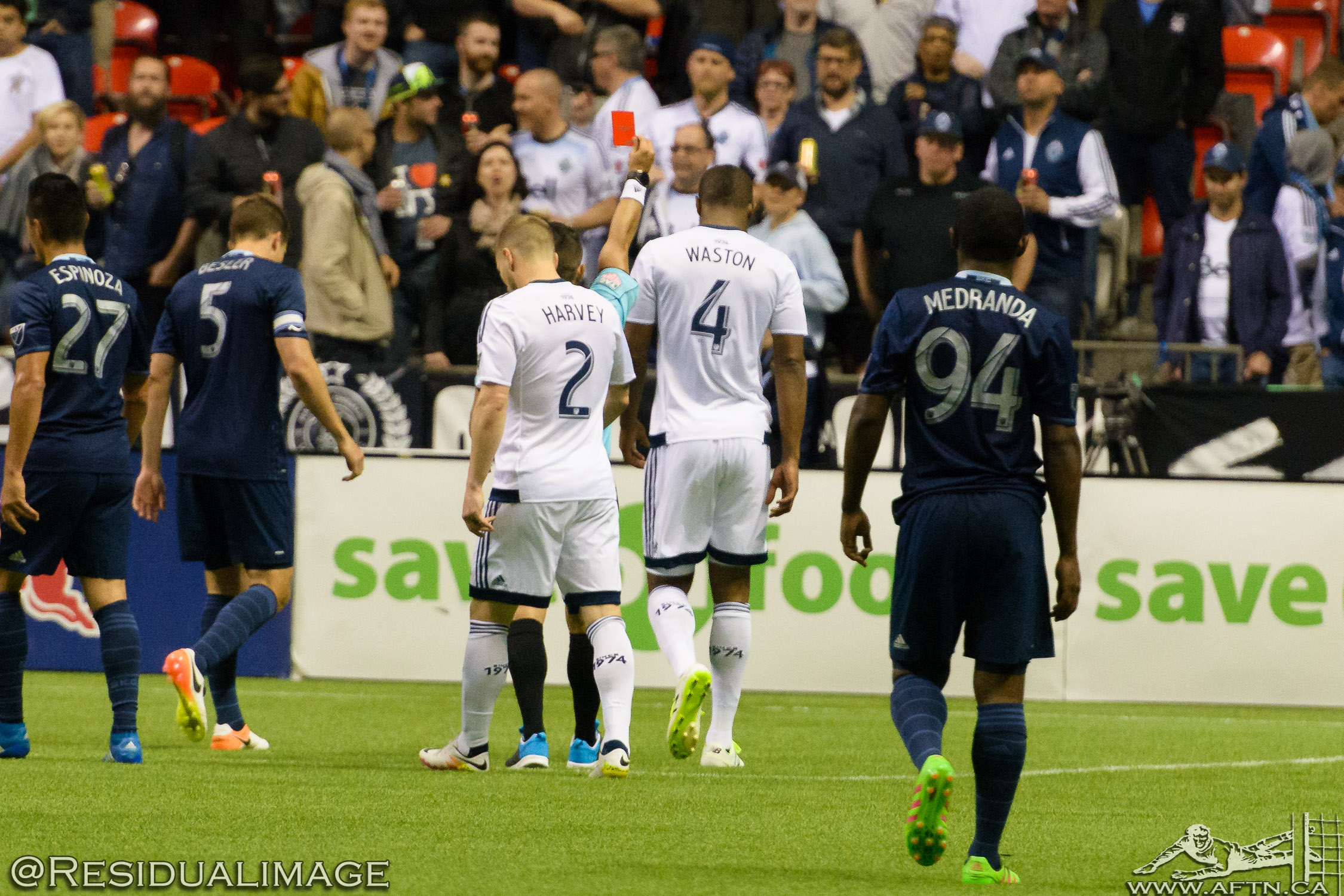 On points won or lost:

“I’m not sure. I just said that to the guys in there, I’m not sure whether to be happy, to be sad, to be frustrated, annoyed. You know I thought we played very very well in the first half. I thought we played some of our [most] exciting stuff as we have done. We got our noses in front. Credit to them. They got back in the game, but that shouldn’t happen from us. We switched off the second phase. When you do that against good teams you get caught. It was pleasing but disappointing in the first half. Second half is just a catalogue of errors from us. We.ve got to make sure that we don’t to that too many times, because three times in nine games we’ve played with 10 men. We haven’t conceded a goal, which is good. So the character shown towards the end of the game is phenomenal from that group in there, especially when their backs are against the wall. So, pleased from me in that respect, but we’ll brush ourselves down again and we’ll go on a nice long trip tomorrow.”

On the two yellow cards on Kendall:

“I’ve got no complaints about the second yellow card. I think it’s a poor decision, not just by Kendall, but from a number of players that were made. I just got told the first card is not a yellow card. So that’s a frustrating thing for me. But there was a number of frustrating things, because there was tackles that were missed, and there was a hand ball on the floor when my guy’s breaking through, which was missed. And I tried to ask the referee at the end of the game, but he didn’t want to shake my hand. So, that might tell you something.”

On team discipline and inability to field a steady line-up:

“That’s a frustrating thing. You want to try to get into a rhythm and a groove, and we’re nine games in and we haven’t able to field a settled team. Is it the discipline? I think you look across the league generally, which I do because you’ve got to review games and look at games, but all you can do is focus on yourself. Do my team need to be better, do we need to be better? Yeah, ok, I’ll accept that. But if the sending off today has been caused by a yellow card, which was deservedly so, and a non-yellow card, then I think I can’t really criticise their discipline. If it’s a blatant red card, then by all means. You know we had one of them in Kansas City away, I think it was a red card. I’ll accept that and I’ll take the blame for that.”

“Even me, I was surprised. It was difficult but I just tried to shoot in the goal. I was lucky to put the ball just in the corner and very happy for make my first goal.”

On getting into the starting line-up at home:

“I told another reporter when the national anthem was playing before the game, what was going through my mind was my first game at Empire Stadium and you know you get goosebumps on your body thinking about it. But I remember just the sound of the fans on the opening day and you know it kind of felt like opening day all over again for me just because I’d been out for a little while. It’ll always be a pleasure to play in front of the home fans whether it was at Empire or at BC Place today. It’ll always feel special.”

On whether it was points lost or won:

“We got down to 10 men, but again we’ve shown in the past, I think we’ve been down to 10 men three times this year and we can still play when we’re down a man. I think the game was there for us in the first half, maybe we should’ve capitalized on a couple of chances. You know we did have a couple times where we lacked focus but that’s the way the game goes. I think after we go down to 10 men we showed a lot of character to not get scored on and to finish the game and get a point out of it. But with that we still looked dangerous and we still had a couple chances and we could’ve capitalized on it and took three points in there.”

“We were a little bit beat up from our game on Sunday, we were depleted. It was a hot day, we weren’t used to it. It’s not very hot in Kansas City at the moment so we haven’t really had a chance to acclimate to it. I actually thought we brought pretty good energy playing away from home. Getting a point, yeah it’s ok, but whenever you go up a man you always want more. I thought we actually got a couple opportunities here and there but they did a good job, they were really compact in the middle and also compact in their two lines. They made it really difficult for us to go up through the middle. Everything was wide and that made it difficult. Any time you go on the road in this league and get a point, it’s a pretty good thing.”

On not creating more chances after Zusi and Davis subbed on:

“Sometimes the rhythm, it’s hard for them, they come in late and they’re not in the rhythm of the game. It would be nice for them to have a little more but like I said, many times as a player and as a coach, you’re in a situation where you’re playing up a man and you are playing against a team that is extremely galvanized in their way that they’re now going to defend the game, and so there’s not a lot of space. It’s difficult to break a team down. Probably the one thing that we weren’t good at it, was when they surged forward, we needed to get at them a little bit quicker so that they couldn’t get behind the ball. Outside of that, everything else is what it is.”

“He’s played a couple of games now, he was pressing way too hard to score, it’s what he wanted to do so bad, and I thought it took him out of his game and I had a long talk with him and I just said ‘listen, you’ve got a lot of other things that you bring to our team, and when you get your chance it will come, you don’t have to force it.’ I thought today, he did a lot of other things for us in the game outside of scoring, but I also think it was good for his confidence to put one in the back of the net. And for any goalscorer that’s an important aspect.”

“It was an important move for us to give him a shot to play because we had two more competitions we’re going to have to play in with the U.S. Open Cup and also Champions League in the summer time. So we’ve really got to rely on both keepers and we really haven’t had a chance to play him play him yet in a game with us, so I thought he did a good job. There’s nothing he could have done about the first goal, it was a great finish. Bad marking on our part but tremendous finish. It wasn’t his fault. Outside of that I thought he managed the game real well.”

“It’s good to battle back and get a point away from home. I’m proud of the guys and the way they fought the whole game.”

On having a man advantage for 40 minutes:

“You can’t be too disappointed with a point away from home no matter what the circumstances. We would have obviously loved to get three to take back to Kansas City, but a point is very important, especially at this point in the season.”

On upcoming game against LA Galaxy:

“Just keep training hard. We have a quick turnaround, so just rest the legs and be ready for Sunday.”

“Everybody told me that it is always difficult to play here in Vancouver. Of course they were playing with 10 players for I think 30 minutes, so of course we are supposed to win. I think we made the effort, but that happens in football. They tried to defend the last 30 minutes and they did a good job.”

On coming away with a draw: