Well I have been nothing if not consistent, going along at 50% in each of the first two rounds… The FVSL looked in pole position to bring this title to the Valley, but four of their five remaining teams crashed out. The two “smaller” leagues from Burnaby and Richmond look strong as they seek to put a stop to a three year VMSL streak in this tournament and back to back seasons with an all VMSL final.

For those not familiar with my column, I am largely just pulling this stuff out of thin air. I try to find whatever information is readily available online, but ultimately I am just trying to generate some interest in local soccer in BC. If I have omitted or overlooked facts that you consider relevant to your team or league, it’s not done intentionally…get over it!

Vancouver Strikers flew the VMSL banner high in their second round win over Fraser Valley Champions Abbotsford. The Valley boys looked like a side that could have what it takes to go all the way and were certainly not short on confidence after winning the league and cup double in the FVSL, but, as has been so often the case this time of year, the curse of the VMSL struck.

It was a close game but Strikers, who were coming off a long lay off, had the extra focus required to turn a late 1-0 deficit into a 2-1 win. One cannot help but wonder if that sort of confidence is born out of the swagger of playing in the “better” league all season. Strikers were underdogs in that game and will need to knock off another “lesser” league champion if they are to continue to progress.

West Coast had the decisive tally in their domestic clash with Graduates and emerged 1-0 winners as they entered the competition last weekend. Those sorts of clutch performances are what saw West Coast win the RASA title ahead of the RASA juggernauts All Blacks. The Richmond league is always so difficult to get a read on, but if you go by the results, second placed All Blacks have knocked off the defending Provincial Champion and VMSL Division 2 Champion Vancouver Greencaps, as well as having navigated a dodgy trip to the Island.

West Coast have only played Graduates, who had beaten Langley Sparta from the FVSL in the Preliminary Round, but, following this logic, proved themselves over an entire season to be better than All Blacks and they beat Greencaps who were likely better than Strikers (though those two never met being in separate brackets). Clear as mud?

In a one game playoff anything can happen. Strikers proved that last week when they beat Abbotsford. Heck, they remain the only team to have beaten VMSL titans Coquitlam Metro Ford Lupi this season. Clearly they can beat anyone on their day. However, they are also a beatable side as evidenced by their six losses on the year. There’s really no comparables here, close your eyes and point. I’ll tip my hat to the Richmond league given their strong performances in the competition to this point and say that their champions emerge victorious.

An intra-league battle will ensure that the Burnaby Men’s Soccer League (BMSL) has a representative in the semi-finals for the second time in three seasons.

Last year it was Sierra, as league champions, who fought their way to the quarter-final stage of the competition before losing to finalist NorVan. This time they must face the team that has supplanted them at the top of the BMSL and must be, by now, surely haunting their dreams.

Sierra won the first meeting of the season between the two sides in October, emerging as 2-1 winners. It would be all Impero the rest of the way however, as they won the reverse fixture 4-3 en route to claiming the league title by a mere two points. They would reign supreme again in the semi-finals of the League Cup, beating Sierra 2-1 before winning the trophy over Burnaby Gunners. The teams would meet once more in the Rudolph Cup final and Impero would win again, this time on penalties.

So of course they would meet again in a fourth competition and let’s hope they put on a show. Clearly the sides will know each other rather intimately given that this will be their fifth meeting this season and the two were also the class of the BMSL, leaving the rest of the pack well in their wake.

Having each reached the summit of the Burnaby League, one wonders what the next steps might be and if either side might be looking to get into one of the leagues competing for the A Cup, or if they are happy being the big fish in a smaller pond. One thing for sure is that they will both want this title.

Impero came close two seasons ago when they reached the semi-finals and will be keen to better that result. All the matches between the clubs this season have been decided by a lone goal or less in the case of the shootout win in the Rudolph Cup. I’ll make this one my Upset Special and say that Sierra see the law of averages even out and, after losing three straight close ones, this time they are the side the find the crucial goal to make all the difference. 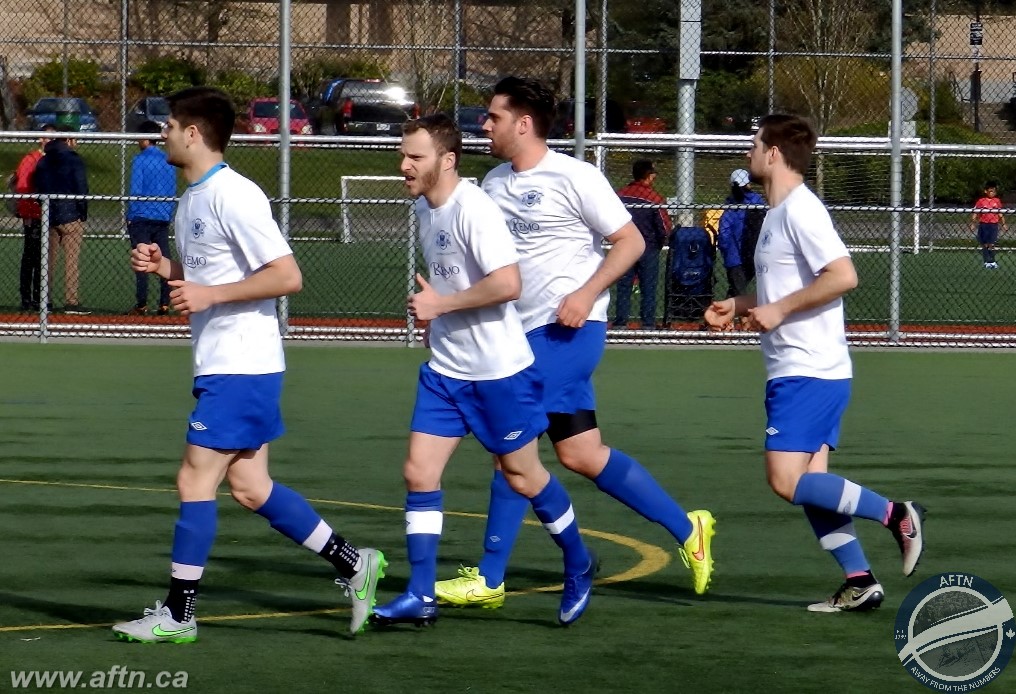 This one is definitely the Match of the Round as the VMSL’s best host the fearless All Blacks. The Richmond side, who were champions at this level in 2005, 2009, and 2013 along with being finalists the following season in 2014, seem to have the taste for it once more.

They stunned defending Provincial Champions Vancouver Greencaps in the first round 2-0. Greencaps won Division 2B and will play in Division 1 next season. They lost only a single league game as well as the cup final to Richmond’s next opponent, VMSL Division 2A champions Coquitlam.

In case anyone thought that victory over the Irish contingent was a fluke, the All Blacks hopped on a ferry and took care of business against a strong Gorge team from the VISL. Gorge were runners up in Division 3A on the island and, known for their free scoring ways this season, ran out into an early 2-0 lead. Richmond came roaring back to win 3-2 which is an impressive feat in any match, let alone when you are away on the Island in a Provincial Cup game. With the results that they have posted so far during the competition, All Blacks have to be considered contenders at this point.

Lupi are most certainly contenders as well and were likely the pre-tournament favourite. With the clout of being VMSL league and cup champions, they showed their pedigree in their first match against a plucky Mission side. The Tri-Cities boys spotted their visitors an early lead before levelling things up. They were reduced to 10 men just before the break which, when the stakes are this high, would make it highly understandable if they reverted to a defensive shell and looked to maybe knick a result against the run of play. Instead, Metro Ford played arguably better with 10 men than they did with 11 and banged in five more goals in what would finish a 6-2 win. So yes, they are as good as their reputation would make them out to be.

The Lupi boys have not tasted defeat since October and that was the only time that they have lost this season. The future of this team is uncertain, given that the move to Division 1 is as high as they can climb because the club already operates a team in Premier. If their players harbour ambitions to play at the highest level then they will have to look for opportunities beyond Lupi. That is a future problem to worry about though, for now, Coquitlam are just focused on adding another trophy to the cabinet. This one should be an absolute cracker. All Blacks have met every challenge and will certainly be up for this one, but Metro Ford’s pedigree makes it impossible to bet against them. I will take the VMSL champions to progress, though I cannot see the scoreline being as lopsided this week.

After knocking off the Blue Devils in extra time last weekend, Powell River will now welcome their FVSL neighbours the Red Devils. The Sunshine Coast boys have another home draw and look to be trying to use it to its full potential. With other matches in the area, the only available pitch for this weekend was noon on Sunday. That essentially rules out same day travel, as the only way to get to Powell River by noon would be to be on the 6:15 ferry from Horseshoe Bay, drive an hour north to Comox, and make the 9:55 ferry to Powell River. That would put you in town around 11:30 and you would basically need to head straight to the field, kit up, and get on with it, which might not be the ideal way to approach a Provincial quarter-final. Not to mention that you would need to be on the road from Abby to West Van by 4:30 or 5 am at the latest to make that boat out of West Vancouver. Clearly then, a travel nightmare for the Valley boys who are the lone remaining representatives from the FVSL.

The league had five teams progress to the previous round, but only Red Devils advanced with a 3-2 win over fellow Valley side Langley Dynamo. Abby may not have had their best season in the league, finishing a distant sixth place, but they shone in the knockout competition, reaching the final before losing to league winners Abbotsford United. This will be an extremely tall order given the famous home field advantage that Powell River are known for having; not only the travel but also the atmosphere and the local support the home side receive make it a tough place to go and get a result.

This holds true not only for mainland teams, but it applies to their VISL domestic rivals as well. Powell River were Division 3A Champions, losing only three times on the season and only once at home. They also have only conceded seven goals on their own patch across all competitions while putting up 35 of their own. In fact, only one time this year have the Villa allowed more than a single goal against in a game and it was in their Challenge Cup loss to Castaways.

This is a good team and a title contender; add in their home field advantage and there’s no way that cannot be the favourites going into this one.

Canucks4Ever is a regular on the Take The Piss Forum. Check it out for some great local football banter.