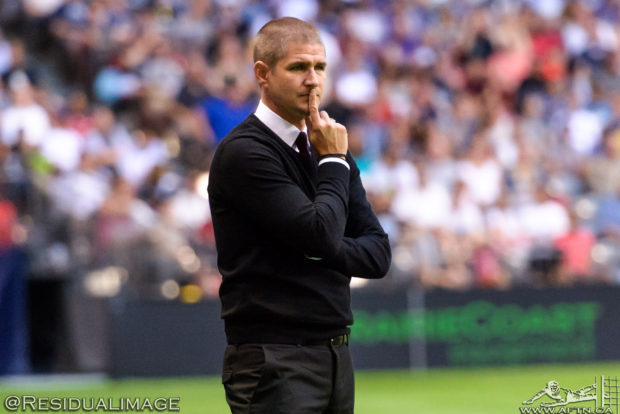 (Con)figuring out the 2018 Vancouver Whitecaps is going to be a difficult job. Well in some regards. It already feels that this is going to be a season of varying line-ups, with a lot of rotation of both personnel and systems.

So pretty much like 2017 then but with some new faces? Perhaps.

That’s not what a lot of fans want to hear, I know. Many are wanting some kind of change. Something to breathe some new life into the team they’re watching. Something more attack minded. Something more entertaining. Still early days, and a lot can happen over the next 11 months, but the signs from the three preseason matches in Hawaii do point to that perhaps not happening. At least not from First Kick.

At the end of January we ran Part One of our new ‘Configuring out the ‘Caps’ feature. The aim is to be a tracker. A changing look over the course of not just the preseason but the whole year, of what I feel the Whitecaps starting XI is looking likely to be.

Not necessarily the best 11 players or even who we’d like to be in the team, but who, based on aspects such as fitness, injuries, form, and expectation, Carl Robinson may have as his preferred first choice starting XI at a given time in the season.

Our first snapshot was at what we called the end of Phase One of the preseason, after the ‘Caps first 10 days of training camp back in Vancouver before they jetted off to the sun, see, sand, and soccer of Hawaii. You can find my thoughts HERE, but it was basically a 3-4-2-1 set-up.

The original plan was to have the second snapshot at the end of Hawaii, but I wanted to wait to see how a couple of things played out back in Vancouver, so with the team off on their travels again to Las Vegas and Los Angeles for more matches and training, this feels like the ideal time for that second look.

So what did we learn from Hawaii? Very little actually apart from the whole squad seemed to forget to pack any tops for their leisure time. As much as you may want to read a lot into the three matches and team performances there, there was little to glean.

Robbo wanted to tire the players out, putting them through double sessions in the intense heat so that they would be drained and have to think more on the pitch. I’ll admit, I find that all a bit bizarre but then I don’t hold a UEFA Pro Licence. It just seems weird.

What we got were some flat looking performances in the last two matches, with some players certainly looking out of sorts. Not sure that told those of us watching much at all, except if that continued into the MLS season, it might feel like a very long year ahead. As much as we kept reminding ourselves that it was just early preseason, it was concerning. If there’s more of the same next week, that moves up to alarming.

Some players excelled, perhaps none more so than Stefan Marinovic, who produced a string of excellent saves. If we can take anything from the games, it was that the core of the team, and to all intense and purposes the spine, looks strong. We’re talking about Marinovic along with Kendall Waston, Tim Parker, Efrain Juarez (for the first two games anyway), and Kei Kamara. That’s a good five, but they need help from the supporting cast.

The rest were fairly mixed. Some highs, some lows, some concerns.

Cristian Techera looked promising for much of it, especially his delivery for Kamara. The same was true with Alphonso Davies. Brek Shea had some moments, good and bad, as did Aly Ghazal. David Norman Jr looked hungry too and gave a good account of himself. Once he gets up to the new pace he’s at, it could be interesting to watch him fight for minutes.

From those trying to fight for a contract, of the two draft picks Lucas Stauffer impressed the most. Justin Fiddes did well. It’s going to take them both a little time to adjust to the pro game you feel, but I think both will be fine.

The real interesting ones for me, and why I was waiting to see what played out at training this week before writing this piece, was that of the trialists. The new faces to the ‘Caps of right backs Mark Bloom and Sean Franklin, and French left winger Yohan Mollo.

And as it’s turned out, Bloom and Mollo have now left the camp. I didn’t think either departure was much of a surprise.

Franklin was clearly the better player in Hawaii between him and Bloom, and, I guess it may come down to money with the veteran, but it would be a major surprise if he isn’t signed to a MLS deal before the season gets underway.

I’m really not upset that Mollo hasn’t worked out. He seems a character and would have been fun to have around I’m sure, but eight clubs in nine years and the way his time at Fulham ended sounds alarm bells to me. It just feel the ‘Caps were right to steer clear and besides, the left wing position is hardly a need. If anything it’s one of our strongest positions on the pitch with Techera, Davies, De Jong, Levis, Shea, and possibly Blondell all able to play there.

Perhaps the big thing to take from Hawaii was the fact that the much talked about three at the back system simply didn’t happen. We saw it briefly and with some strange personnel in it. Maybe it will make a proper appearance this coming week, maybe it was due to personnel available, but it feels that Robbo is going to stick with his trusty 4-2-3-1 or maybe the 4-1-4-1 that served him well last spring. I have to say, I have no problems with the latter if that proves to be the case.

So how does all of that have our predicted started XI looking now? Well, we’re going with one change of personnel from our first prediction and whole new system. 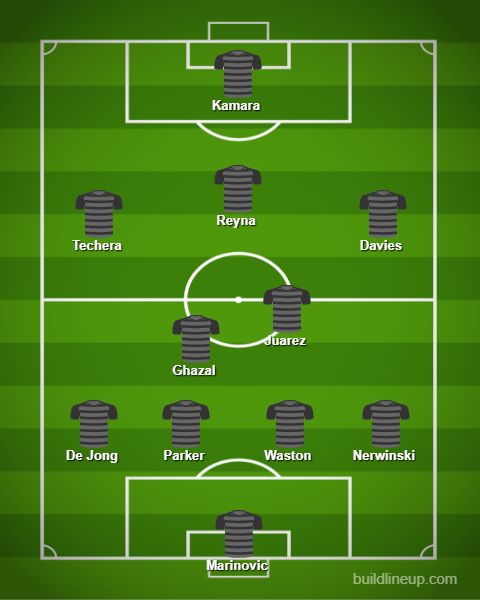 There were certainly concerns about the way Alphonso Davies’ 2017 finished, but I think his hunger and showing in Hawaii has catapulted him back into my starting XI. If he indeed is in there, you know his minutes will be managed carefully and he won’t be starting every game, but I feel that right now, with what personnel is currently in the squad, he looks a good bet to be a starter at First Kick against Montreal.

He’s come in to the XI for Brek Shea. To me, Shea made a lot of sense in a 3-4-2-1 or a 3-5-2 because of his strong defensive qualities and speed to get up and down the wing. When it comes to a good old four at the back however, with two DM’s and a lone striker, he’s not what the ‘Caps need but will be fantastic to come off the bench.

I’m a little hesitant over Nerwinski. He’s still coming back from that injury in Seattle and has played limited minutes so far. If he is touch and go, Franklin could get that start, but we’ll leave him in for now.

So that’s how I feel the starting XI and formation is looking right now. Agree? Disagree? Let us know your thoughts below and we’ll be back with another one post California.