What a difference a couple of weeks makes. After what was looking increasingly like a two horse race in the Vancouver Metro Soccer League (VMSL) Premier Division, a couple of draws for BB5 United CCB and a draw and a second defeat of the season for Coquitlam Metro Ford Wolves has seen the chasing pack make up ground and it’s very much all to play for as we get set to enter week 10 of the season this weekend.

BB5 dropped two points, but extended their lead at the top to two points, following a 2-2 draw with the revived BCT Rovers Hurricanes in the Surrey derby at Newton Athletic Park on Friday night, with both teams in-form strikers leading the way and bagging a brace apiece.

The Golden Boot leading Nic Morello put the league leaders 1-0 ahead just 8 minutes into this one and it was a lead that they held onto until three minutes before half time when Nick Soolsma levelled for the Hurricanes. BB5’s Rylan Sangha was sent off for handball in the 70th minute, giving the chance for the Hurricanes to go ahead. A chance that they duly took, with Soolsma dispatching a penalty for his and his team’s second of the game.

The leaders were facing their first defeat of the season, but were thrown a lifeline two minutes into stoppage time when they got a penalty of their own. Morello tucked it away, taking his tally for the season to 10, one ahead of Soolsma, and keeping BB5 top of the table and their undefeated record intact.

While that drama was playing out in Surrey, second placed Metro Ford were playing host to Croatia SC at Ted Fridge Field in Coquitlam. In a closely contested match-up, a David Malamura goal five minutes from time gave Croatia a huge 1-0 win, moving the 2018/19 champions into fourth place in the standings, five points now off the top.

Friday’s final match saw Inter EDC head to Newton and come away big 4-1 winners over SFC Pegasus thanks to goals from Alex Marrello, Edris Najm, Abdulmalik Ali, and Liam Patrick. Rajan Dhadwal got the lone goal for the Horsemen.

Saturday saw the North Shore derby at Fen Burdett Stadium as West Van FC made the short trip to take on last placed NVFC Norvan and come away with a 2-1 victory, with all the goals coming in the first half.

Andre Herath headed home a 26th minute opener for Norvan from an inch perfect free kick into the box, his first of the season, but the home side’s lead was to last just 12 minutes before Michael Winter tied things up for West Van when a corner came to him at the edge of the box and he fired home the equaliser.

The decisive goal came two minutes into first half stoppage time, when Kiya Darbandi took a touch in the box and tucked it away from six yards out to give West Van a lead they weren’t to give up.

You can see Sports Revolution’s highlights from the match below:

Sunday’s action kicked off with a battle between 3rd and 4th with VUFC Hibernian hosting Rino’s VSC Coastal up at UBC.

Two first half goals got the job done for Coastal, with Brede Kidd opening the scoring on the half hour mark and Sean Northcote doubling their lead on the stroke of half time.

That win saw Rino’s move up to third in the standings and they now sit just four points off the top spot.

So after all of that action, here’s how the VMSL Premier Division standings look after Week 9: 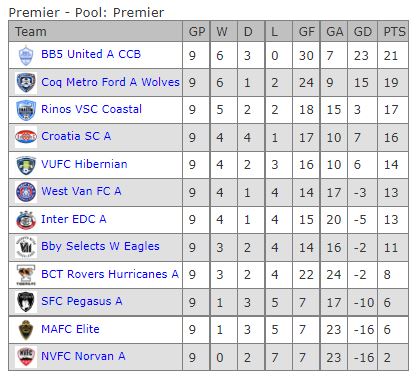