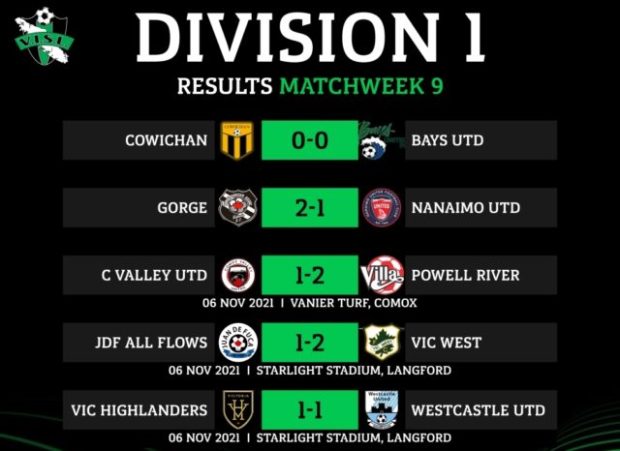 Well, there is a reason you play the game as opposed to thinking which team will win. This past weekend had every game offer a whole lot of unexpected happenings in Division 1 of the Vancouver Island Soccer League (VISL).

Friday started in North Duncan and Bays United vs Cowichan turned out to be a 0-0 draw. It was a game where not a lot of chances were created with a battle in the middle of the field. Cowichan’s Raymond Fox and Bays’ Brandon Groot recorded the clean sheets.

Friday night saw a huge upset if you solely go by the standings as Gorge defeated Nanaimo United 2-1. Kaelan Cooke and Tony Litke were on target for Gorge, with the solo goal for Nanaimo scored by Matthew Mehrassa.

Saturday had a good battle and Powell River snuck by Comox 2-1. Powell River Villa goals were scored by Nico Cristante and Russell Pielle, while the home side Comox goal scorer was Grayson Chalifoux.

Game 1 saw Vic West come from behind and defeat Juan de Fuca Allflows 2-1 thanks to a pair of goals from Marcus Campanile. Ori Fisher was the scorer for JDF.

Game 2 of the double header saw Victoria Highlanders and Westcastle battle to a 1-1 draw. Scoring late in the game for the Highlanders was Wyatt Davis, with the Westcastle goal scored by Ydrisa Da Silva.

League leaders Lakehill had a bye this past weekend.

So after all of that action, here is how the VISL Division 1 table looks after Week 9 is in the books. 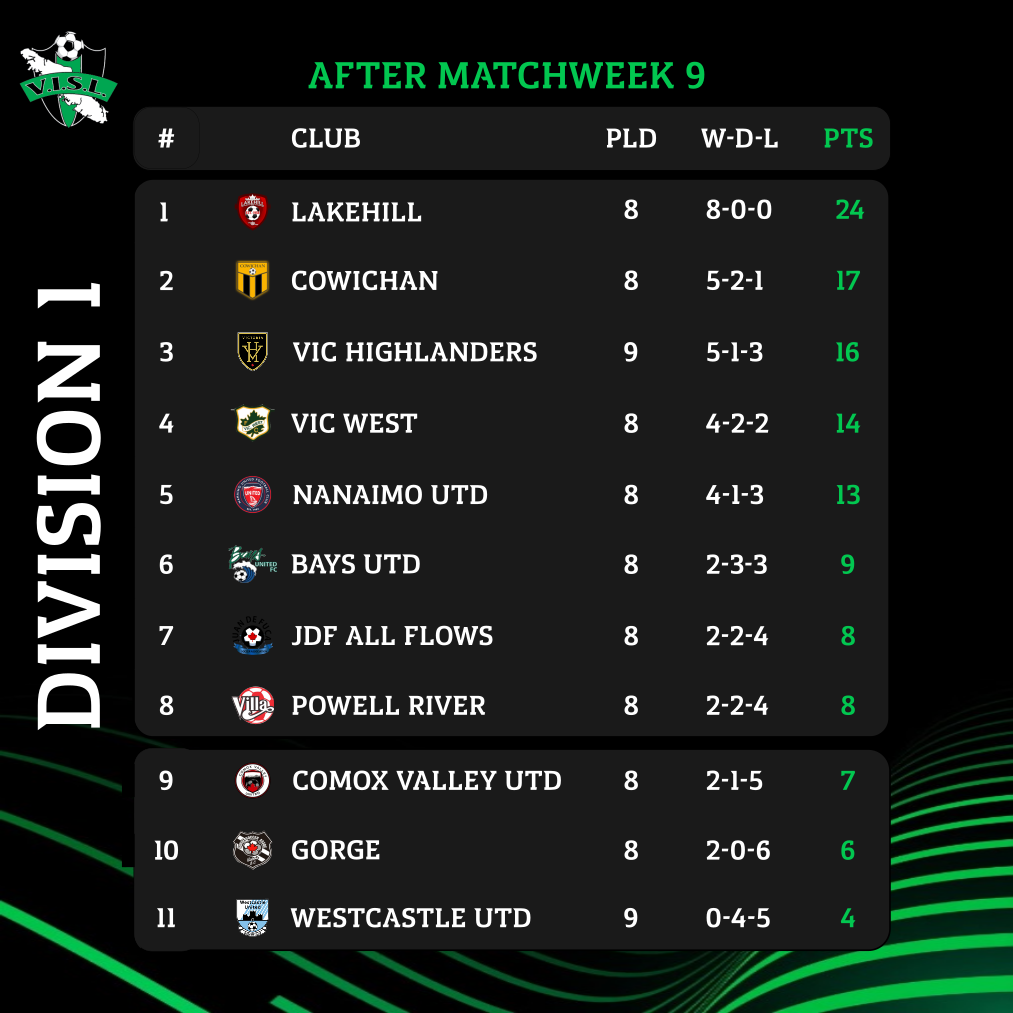 Lakehill had the weekend off, so they were sitting back with lots of popcorn enjoying the odd results. No doubt they were happy that the two teams closest to them both had draws, so their lead ‘grew’ accordingly via dropped points by other teams anyways.

A Vic West win was tougher than expected, but their late surge puts them just passed Nanaimo who had a tough loss to Gorge.

There’s plenty of excitement at the bottom of the table as Gorge worked their way out of the cellar with their big win, leaving Westcastle surprisingly at the very bottom. Just ahead in spots 7-9 there are just two points separating four teams. Upcoming games will have even more on the line.

Another shutout was recorded for Cowichan keeper Raymond Fox, and that gets him right into into the Golden Gloves mix as he has two now. Leader Hardeep Gahunia of Lakehill is still on top, and enjoying a week off at the same time.

Goalscoring wise, it was a quiet weekend for the leaders, leaving the top of the Golden Boot race unchanged. 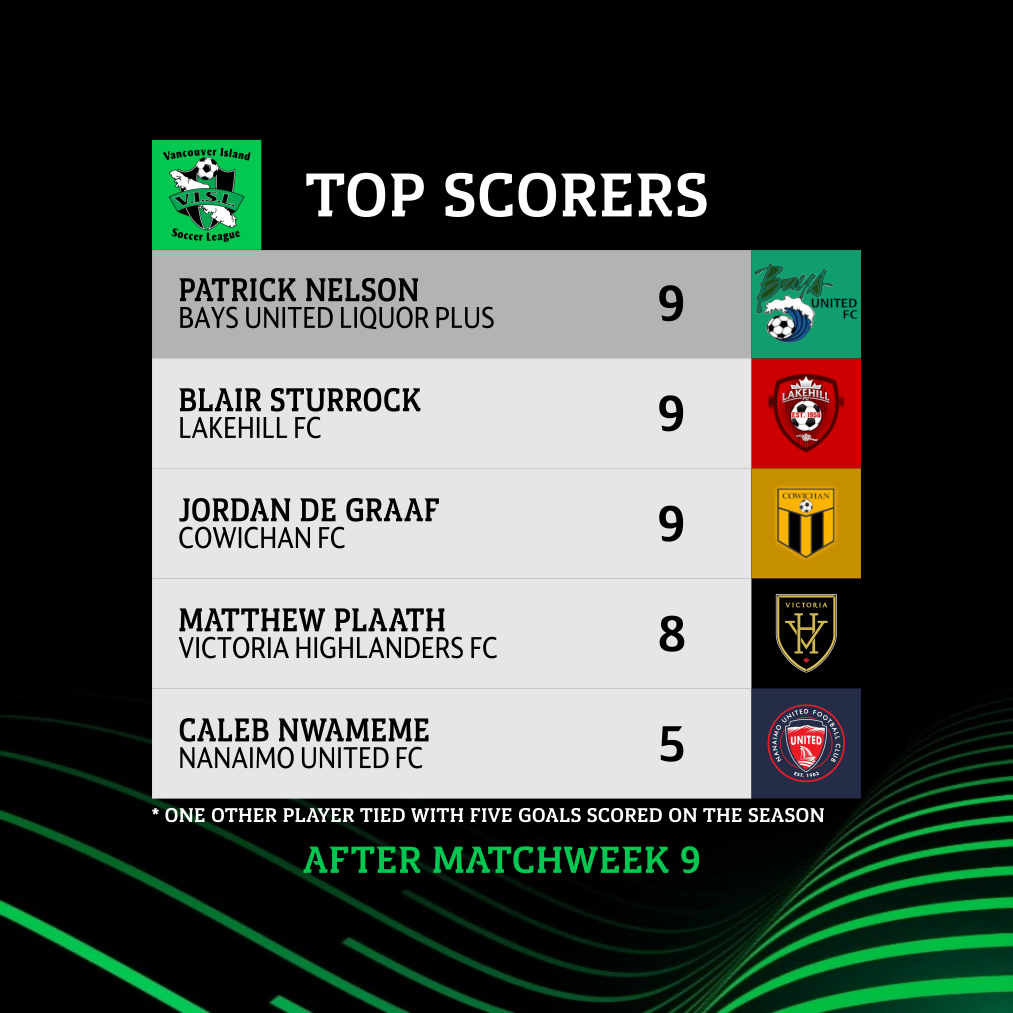 So a super exciting weekend of amateur men’s soccer was had. There were some cold and rainy times, but all in all – a decent weekend for November. More of the same for this coming weekend?

Most of the league is past half way point for the year, not our top flight, Division 1. With the odd numbers of teams in the division this year – 11 teams – the 10 game mark is where the halfway point is. The extra team in Division 1 also means that an extra team will be in the relegation zone – making three teams that are in jeopardy of dropping down to Division 2.

There’s only the one game on Friday to get the weekend’s action started.

Immediately following the Canadian men’s national team game against Costa Rica, Lakehill hosts Juan de Fuca Allflows. Thanks to Canada Soccer for scheduling their game at 6.05pm so people could also watch the JDF game at 8.00 pm! Lakehill are still undefeated and leading the division. They are fresh from a week off and will look to get back to their winning ways. The Allflows will be in tough as they come down Highway 1 and visit the not so friendly confines of Braefoot Park in Saanich.

Saturday sees a postponement and Powell River will not be able to host Gorge. Ferries maintenance has taken a sailing away, so that game will be made up at end of season. Unfortunate for both teams as they were coming off huge wins.

Saturday does see a huge battle that has Comox Valley travelling down to Oak Bay to face Bays United. While all games seem big this year, this could set the tone for the rest of the second half of the season as both teams are desperate for points. Bays are coming off a game where a point earned was a good result, while Comox suffered a tough loss to Powell River.

In what may be considered the feature Divison 1 match of the weekend, Vic West are hosting Cowichan at Finlayson on Saturday night. Cowichan are having a great season to this point and are sitting in second place. Vic West have not played to their expectations and will look to keep the positive results going. This should prove to be a battle – hopefully the referee team are ready for a match!

The final game of the weekend sees Westcastle hosting Nanaimo at Starlight Stadium. Regardless of where the teams are right now in the standings, this could prove to be a very even match. Westcastle are in the cellar as their four draws have hurt them. They will need to be ready for Nanaimo, who will be hungry after losing to Gorge FC.

Here’s the full slate of matches, kick off times, and venues for this weekend’s matches: 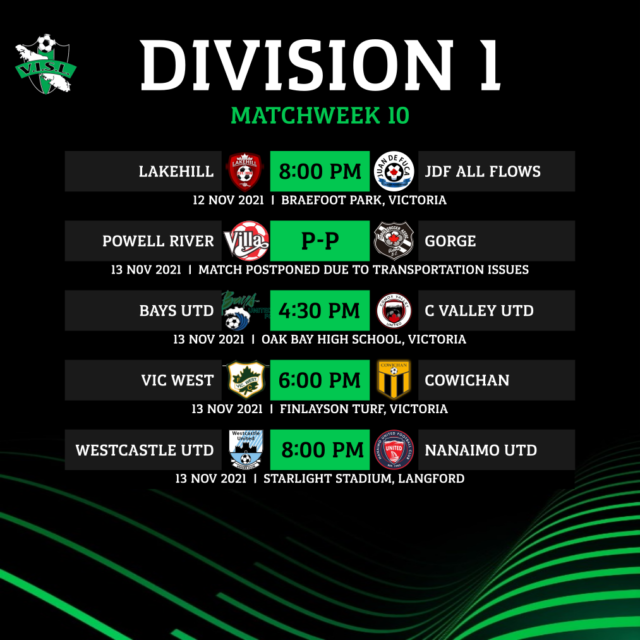 All we know for sure is that 1st place will not be changing no matter what happens in the next two weeks. Everything else in between the leaders Lakehill to the cellar dwelling Westcastle squad is up for grabs.

We also know that Canada will be in for a huge match on Friday night, and we look forward to watching that game safely at the Sticky Wicket inside the Strathcona Hotel. We will also take a moment before all our games this weekend to acknowledge the great people that have ensured we can participate in grass roots soccer.

Thanks for supporting those in your community.